A first ever World Table Tennis Championships is coming to South Africa in 2023 and to the African continent for the first time since 1939.

The election result emerges from today’s Annual General Meeting, the first ever virtually conducted AGM in the ITTF’s history. 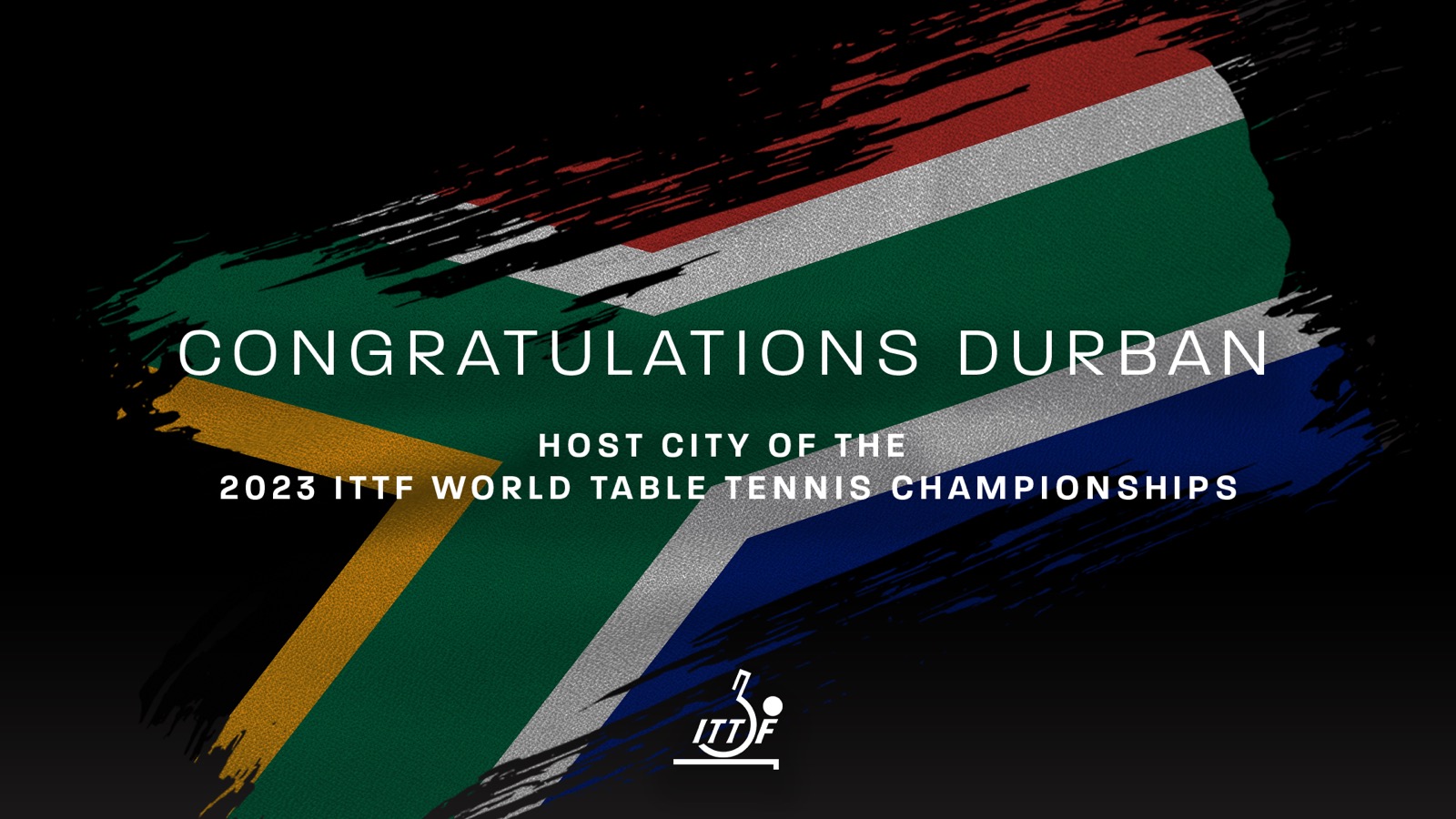 It’s an historic first time that the ITTF’s most prestigious event is being held in South Africa and the first time on the African continent since Cairo, Egypt, in 1939.

The vote vindicates the new format for the ITTF World Table Tennis Championships Finals, coming into place in 2021, which sees continental qualification precede the Finals event, thus making it more feasible for more countries to host.

Düsseldorf had been bidding to stage the event again following the resounding success of the 2017 edition.

“Congratulations to both South Africa and Germany on presenting very strong bids to host the 2023 ITTF World Table Tennis Championships Finals. We are continuing to see benefits from the forthcoming changes to the format of the World Championships Finals, which will be introduced from next year onwards, leading to more countries bidding from different regions of the world. This also reflects the ever-increasing international appeal of table tennis, which is extremely pleasing to see as we continue to work hard to make the sport more global in the future.” – Khalil Al-Mohannadi, ITTF Deputy President

“I am obviously ecstatic and beside myself with joy. The sleepless nights and all the hard work have paid off. I want to say to Germany that their presentation was absolutely superb. I did not want to take our success at all for granted, given all their experience, and I am certain that they will come up again (to host the World Table Tennis Championships Finals) in future. I want to thank the world of table tennis and the ITTF for entrusting us with the confidence with the team that we have, the city that we have, and the support from the government that we have to host this event. We are certain that we will make everyone who supported us extremely proud of having placed their trust in us to take the baton forward and host a World Championships worthy of the trust that you have given us.” – Joe Carrim, President of the South African Table Tennis Board (SATTB)

For the first time ever, the ITTF AGM was held virtually to enable the safest possible solution amidst the COVID-19 pandemic.

ITTF President Thomas Weikert was unable to travel to Doha, having come into close contact with a COVID-19 positive patient last week and therefore needed to quarantine until receiving the all clear on Sunday evening.

There was a special report on the impact of COVID-19 on global table tennis, as the sport prepares for a return to action via the #RESTART series in November 2020, among other key decisions.

Monday’s AGM saw major reforms to the ITTF Constitution with the creation of an ITTF Tribunal, which assumes the judicial powers previously belonging to the ITTF Executive Committee, and an ITTF Integrity Unit. Both reforms will provide yet another important step towards improving the ITTF’s governance.

The ITTF has voted in favour of holding one Extraordinary General Meeting (EGM) in conjunction with the World Team Table Tennis Championships in Busan, Korea Republic, which has been rescheduled to take place between 28th February and 7th March 2021 following its postponement this year due to the COVID-19 pandemic.

The plans for the AGM are to be held towards the end of 2021, to serve as an opportunity to review what is set up to be an intense year for the sport with the introduction of World Table Tennis events and also the proposed Tokyo Olympic and Paralympic Games during the summer.

Yao Zhenxu has been recognised for his longstanding commitment to international table tennis by becoming Personal Honorary Member of the ITTF.

Yao Zhenxu played his part in China – US “Ping Pong Diplomacy” relations. He held the role of Chinese Team Manager between 1985-1995. Thereafter, he worked as ITTF Technical Committee Chair between 1995-2009 and Vice President of the Chinese Table Tennis Association (CTTA) between 1995-2014. He was also Tournament Director at the 1995 World Championships in Tianjin and 2005 World Championships in Shanghai.

As Vice President of CTTA, Yao Zhenxu coordinated the hosting of several international tournaments and helped many international athletes to train in China, thus helping to develop and popularise the sport of table tennis in China and across the world.

A MOMENTOUS MONTH FOR THE ITTF

The ITTF has been keeping its delegates fully up to date across all key areas with six interactive video conferences organised in the build-up to the AGM, which you can recap here:

3) Governance: Propositions and Resolutions to AGM

“I want to thank not only the Membership for their commitment, attending the videoconferences and virtual AGM, but also for their firm declaration today in favour of good governance. We are very grateful for the continuous guidance of the International Olympic Committee (IOC) and the Association of Summer Olympic International Federations (ASOIF) in all governance matters, and to the colleagues from other International Federations which shared their experiences on virtual AGMs during these months. Last but not least, we send our thanks to the ITTF Executive Committee for the proposed reforms. By giving up their judicial powers today, they have shown just how conscious this administration is about the necessity for good governance.” – Raul Calin, ITTF Secretary General