The ITTF-North American Team Championship will be held in Milpitas, California on the 10th September 2016. The event comprises of one team match between USA and Canada in both Men’s and Women’s categories. Lily Zhang from USA and Zhang Mo from Canada will be leading the campaign for both the countries in Women's Team event.

Lily Zhang, currently ranked at number 92 in the women’s singles standings is undoubtedly the athlete the Americans will have an eye on. Zhang represented Team USA at this year’s Summer Olympic Games where she put up a great show. She reached the third round of women’s singles only loosing to Korean defender Seo Hyo-Won. In the second round Zhang impressed as she knocked out Jieni Shao of Portugal in straight sets. The two time Olympian was the only American table tennis athlete to reach that far at Rio Olympic Games.

The 20-year old, who trains at the ICC training center under coach Massimo Costantini, is also the 2016 US National Champion, 2014 Nanjing Youth Olympic Games bronze medalist and 2015 Pan American Games gold medalist in teams and bronze medalist in singles.

Zhang, a student of University of California Berkeley took an year off to train for the Rio Olympic Games. Fresh from the training she endured for Rio along with her confidence, she is clearly the athlete to watch out at the ITTF-North American Team Championship in California.

Lily Zhang will team up with Crystal Wang, world ranked 205 and Wang Chen, world ranked 136 to form Team USA. In terms of rankings, USA has much higher ranked players than Canada. The Canadian team comprises of Zhang Mo (World no.87), Liao Ivy (World no.509) and Xiong Isabelle (World no.563).

However, rankings do not matter, what matters is who plays the best on that particular day.

Zhang Mo: The better off

The much experienced Canadian, 27-year old Zhang Mo is certainly a threat to the Americans. The three time Olympian has competed against Zhang Lily 7 times in the past. Out of those, Zhang Mo won 5 and Zhang Lily won only 2. Zhang Mo has also competed against Crystal Wang twice in the past and has won on both the occasions. With this record, Mo is undeniably the woman that will cause problems for USA.

However, her teammates Liao Ivy and Xiong Isabelle will have a bigger challenge, the challenge to support Zhang Mo in the quest to win the title. 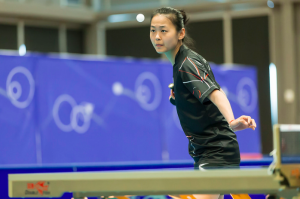