Josiah Wandera may not be a popular sportsperson in Kenya; yet the national number two table tennis star is not ready to give up on his ambition of making name for himself in the sport.

The University of Nairobi Computer Science graduate is aiming to replicate his regional exploits at international level. 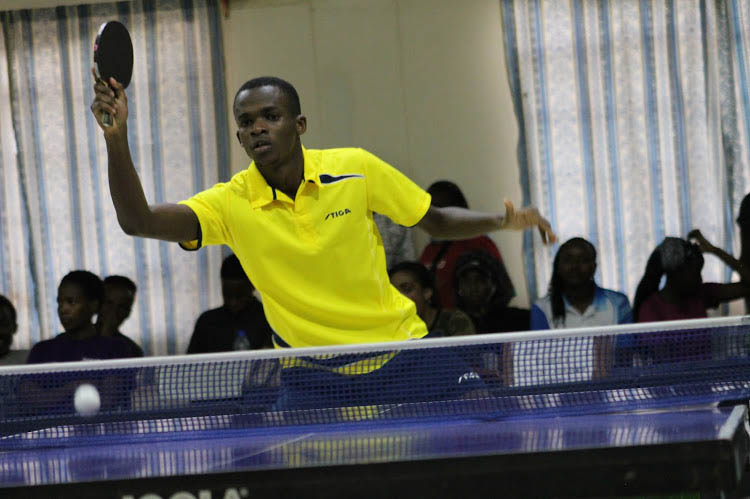 A late starter, Josiah Wandera’s interest in table tennis started as a student at Musingu High School in 2008.

Although table tennis was not that popular in the school, the college being famous for its exploits in rugby and football, the young Wandera was encouraged to play table tennis by a fellow student who had played for Kenya while still in school.

As highlighted in an article published in the Star of Kenya on Monday 2nd November, Wandera is eager to take his skills to global level.

The reigning Zambia Chinese Ambassadors Cup champion has been working to fine-tune his tactics with the aim of testing the waters at International level.

A member of the four-man Kenyan team that featured in the 2020 ITTF Africa Olympics Qualifiers held at the Olympique de Rades multi-purpose gymnasium in Tunis was also part of the team that competed at the 2019 African Games in Rabat, Morocco following his dominance at national level in Kenya.

“It reaches a time in one’s career when you feel you need a fresh impetus into your sporting career. After the qualifiers in Tunis, I have targeted to perform well at International level because I feel there is nothing left for me to prove at regional level. I have won many local events and taking it outside the country would be a great pleasure.” Josiah Wandera

Wandera hopes to improve his sporting career alongside raising his professional skills in the computer trade.

The soft-spoken player may not be able to join the league of African stars like Quadri Aruna of Nigeria and Egypt’s Assar Omar, but he is ready to learn from their flourishing skills.

“The standards of the game at continental level are honestly way above what Kenya has to offer at the present but again as the old Chinese adage goes, a journey of a thousand miles will always start with a single step. At least, we are making good progress in Kenya. My computer science bit is as demanding as knocking balls on the table. It entails networking, programming and software development. I have always been a fan of computers as it’s a generational thing. Recently, I have developed keen interest in reading psychology books to deliberately sharpen my way of thinking and to try to be logical. This has immensely improved the way I interact. I realised I had an introvert behaviour.” Josiah Wandera

If not playing table tennis, Wandera relishes a decent side hustle.

“I do websites and develop mobile Apps as a freelancer as I continue seeking a permanent job. Table tennis for me has been a way of living. It has helped me keep my mental health in check during some of the most difficult times in my life and on several occasions, I have been lucky to win honours thus cushioning me financially even if it’s just for a moment. In France, there was the clear factor of overall improvement in my table tennis skills but for that to happen, I had to completely change some of the techniques I was used to. But more importantly, I felt like my mental strength had improved significantly and this helped me not just in table tennis but also in other areas of life. I was taught patience, persistence and understanding.

“I was taught I won’t always lead in matches or win them for that matter but how I get back after losing is crucial as well. Coming to table tennis and computer science, I just have to try and find a balance between the two. All work and no play makes you dull, right? It’s a clear message that one can actually excel in both and the existence of one doesn’t mean sacrificing the other. While training, I interacted with a lot of players who were playing in the French League at the time and the experience was amazing.

Wandera still has a lot of plans in table tennis.

“Short term, I intend to fight for my place in the Kenya national team and much improved performances in tournaments abroad. Long term, I would want to disseminate what I have been learning over the years to the upcoming junior players,” Josiah Wandera

“In Paris, I met the coach on Day One for an introductory phase of training. Thereafter, I played some few games just for him to get to see and analyse my style of play, weak points and strengths. Then he mentioned them to me later after that first session. A lot of multi-balls and footwork training was also part of the scheduled programme and this went on for a period of a month. I learnt a lot, from table work to the mental aspect of the game. One of the most stressed out issue was patience. So all these skills and more is what I have loved to share with not only my teammates but the Kenyan table tennis community as a whole, for us to move forward as one.” Josiah Wandera

Wandera says that time keeping in sport is of essence.

“It’s always important to have a schedule and stick to it. If you say you want an hour per day for just training on services then adhere to that. Another thing is being attentive.” Josiah Wandera