In the past week Egypt's Hana Goda has gone from a promising young prospect to global star, going viral online for her outstanding display at the 2019 Egyptian National Championships where, on Wednesday 25th September, she won the Under 12, Under 15, Under 18 and senior titles aged just 11 years old!

Now the young star is set to meet one of her country's biggest sporting stars after challenging football icon Mohamed Salah. 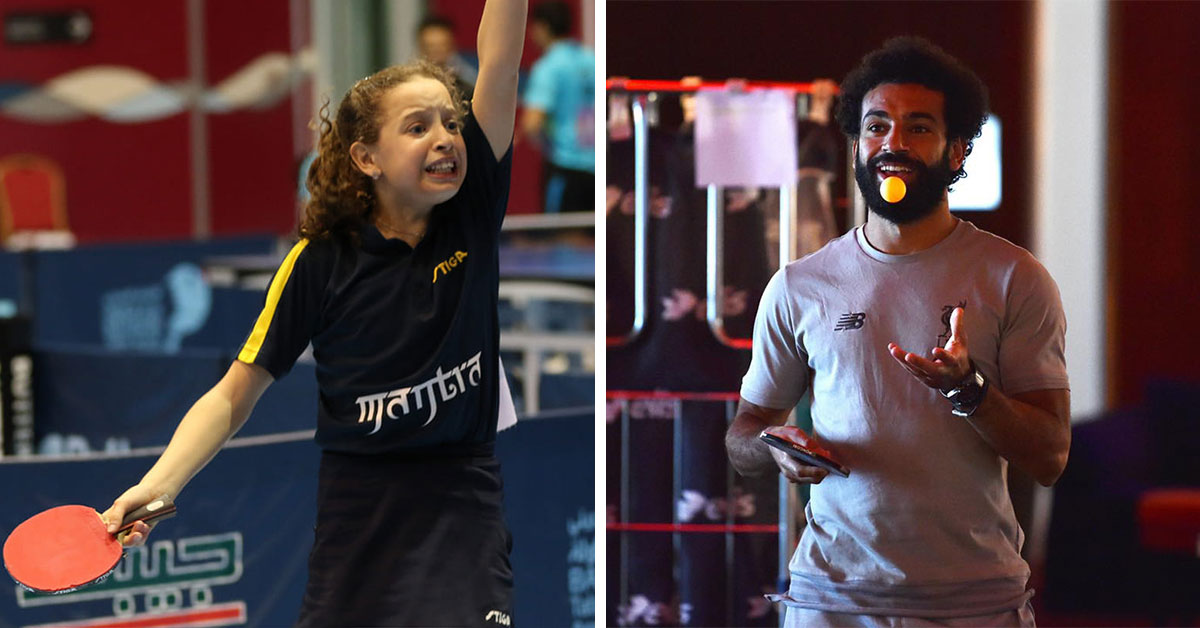 Egypt and Liverpool Football Club forward Mohamed Salah was joint winner of the 2018-2019 Premier League Golden Boot award thanks to a 22-goal return. Also, he was recently nominated for the Best FIFA Men’s Player award which was eventually won by footballing titan Lionel Messi.

Now, through the power of social media, Salah could be set for his biggest challenge yet: a head-to-head contest with young Hana Goda!

On Thursday 1st August Salah posted a trio of photos of himself and Liverpool FC teammate Dejan Lovren playing table tennis against one another to his official Facebook page, providing the perfect opening for Hana to pounce.

Seeing the post, Hana challenged Salah to a match but at first didn’t receive a response. However, news of the challenge soon found the footballer on Twitter and on Friday 27th September he responded:

“Should I send you Mecca my daughter first or come along myself? Okay I accept the challenge!” Mohamed Salah

One of the world’s biggest football stars but Mo Salah will have a difficult task ahead of him if he’s indeed to meet Hana Goda on the table, who recently stole the show at the Egyptian national table tennis Championships.

At 11 years and 251 days, Hana Goda is already threading a path, others her age cannot match. Hana is known globally as the “Egyptian Angel” because of her talent has continued to attract attention within and outside Egypt.

She is a journalist’s delight with her radiant looks and comportment. She has featured in major television programmes across Egypt; her face has adorned the pages of newspapers across the North African nation.

However, Hana who is looking forward to marking her 12th birthday on Thursday 12th December this year, became the national women’s singles champion in the absence of Egypt’s no.1, Dina Meshref.

Following the disappointment of a round of 16 exit in the junior girls’ singles event at the 2019 ITTF Croatia Junior and Cadet Open still fresh in her memory, Hana returned to Egypt on Monday 23rd September, a few hours later she was competing at the Egyptian National Championships alongside established senior players.

Undeterred by the calibre of players standing in her way, the “Egyptian Angel” went to work, coming through eight fierce contests undefeated to put her name in the semi-finals against top seed and Egyptian no.2: Farah Abdel-Aziz.

Goda was coached by Mahmoud Hamed in the final against Farah Abdel-Aziz, who was a member of the gold medal team at the 2019 African Games, the youngster was at her best and to the surprise of all, she prevailed  (11-7, 11-6, 13-11) to become the youngest-ever women’s singles champion at the tournament.

An elated Hana described her win as a key route on her journey to achieve her dream:

“I am very happy winning the title and this is just the start of my dream of becoming the first Egyptian to win an Olympic medal in table tennis. I am just working hard towards my dream. I am doing my best to achieve my gold medal aspirations at the Dakar 2020 Youth Olympic Games and then the Paris 2024 Olympic Games. It is a long journey but I must start well and this is just one of the ways to fulfill my dream.” Hana Goda

Hana admitted that her exit in Croatia fired her for the Egyptian national championships. Her next target is to win a medal at the prestigious World Cadet Challenge in Poland later this year.