Early stages in the team events at the 2019 Serbia Junior and Cadet Open in Zrenjanin completed on Thursday 26th September; the nation very much at the centre of attention was Russia.

In the junior boys’ event, as well as in both the cadet boys’ and cadet girls’ competitions, they upset the order of merit to ensure places on the medal podium; in the junior girls, they progressed as status advised.

In the junior boys’ team competition; the no.7 seeds, the formation of Damir Akhmetsafin, Ruslan Cherkes and Maksim Bokov recorded a 3-0 win against the no.6 seeds, the Tunisian outfit formed by Aboubaker Bourass, Youssef Ben Attia and Khalil Sta to secure first position in their group.

A notable win, it was even more notable at the quarter-final stage, victory by the same margin was recorded against the no.3 seeds, the combination of Canada’s Terence Yeung who joined forces with Michael Minh Tran and Kai Zarehbin of the United States.

At the penultimate stage, Damir Akhmetsafin, Ruslan Cherkes and Maksim Bokov now meet top seeds, Brazil’s Guilherme Teodoro, Eduardo Tomoike and Kenzo Carmo. In the opposite half of the draw, the no.2 seeds, the Czech Republic’s Tomas Martinko, Radek Skala and Ondrej Kveton face the no.4 seeds, the team formed by India’s Raegan Albuquerque and Yashansh Malik, alongside Lode Hulshof of the Netherlands.

The no.11 seeds, in the group stage they secured a 3-0 win against the no.5 seeds, England’s Benjamin Piggott and Naphong Bonyapraya, before at the quarter-final stage recording an even bigger upset; a 3-2 margin of victory was the outcome when facing the top seeded Romanian trio of Andrei Istrate, Drags Bujor and Horia Ursut.

Russia now faces the Croatian partnership of Borna Petek and Luka Zlatkov in the penultimate round; the no.7 seeds, at the quarter-final stage they caused an upset by securing a 3-0 win when facing the no.4 seeds, England’s Louis Price and Thomas Rayner. In the adjacent half of the draw, Thailand’s Tanapat Thanmathikom and Napat Thanmathikom, the no.2 seeds, confront the no.4 seeds, the partnership formed by the Czech Republic’s Matyas Lebeda and Kazakhstan’s Alan Kurmangaliyev, the no.3 seeds.

First place against the odds

Success against the odds for Miron Vasilev and Evgeny Tikhonov, it was the same in the cadet girls’ team competition for their colleagues, the no.11 seeds, Mariia Bordiugovskaia and Karina Iupsova. They finished in first place in their initial stage group, notably recording a 3-2 win when confronting the Bosnia-Herzegovina combination of Dora Cosic and Ajna Zlotrg, the no.4 seeds.

An unexpected group top spot for Russia, it was the same for the no.5 seeds, the Kazakhstan pairing of Alexandra Smirnova and Sarvinz Mirkadirova. They secured a 3-0 win in opposition to the no.3 seeds, Slovakia’s Dominika Wiltschkova and Sara Bilkovicova.

In the penultimate round Alexandra Smirnova and Sarvinz Mirkadirova meet, the no.2 seeds, Germany’s Jele Stortz and Mia Griesel; Mariia Bordiugovskaia and Karina Iupsova face the Brazilian top seeded duo of Giulia Takahashi and Laura Watanabe.

Russia to the fore, in the junior girls’ team event it was the same, Elizabet Abraamian, Olga Vishniakova and Natalia Malinina finished in first place in their group as their no.2 seed position advised. It was the same for their colleagues, the no.4 seeded outfit formed by Liubov Tentser, Arina Slautina and Vlada Voronina. They duly topped their group, a feat also accomplished by the no.3 seeds, the French outfit of Isa Cok, Chloe Thomas and Clémence Chevalier.

However there was a major upset in the early stages of the junior girls’ team event; the formation of Amy Wang of the United States in partnership with Serbia’s Raka Bezeg and Radmila Tominjak, the top seeds, experienced a 3-2 defeat at the hands of the international trio comprising Hungary’s Daria Helga, Romania’s Irina Rus and Serbia’s Radmila Tominjak.

All team events will be played to a conclusion on Friday 27th September. 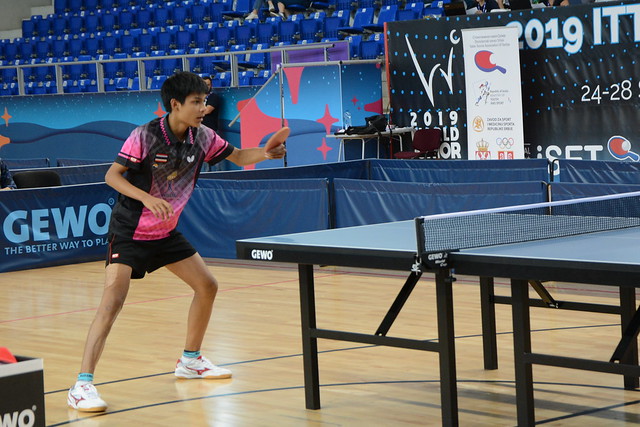