Located in the Indian Ocean, Mauritius was the recent home for the 2018 Africa Hopes Week and Challenge; proceedings commenced on Monday 7th May and concluded on Sunday 13th May.

A total of nine boys and nine girls, all born between Sunday 1st January 2006 and Wednesday 31st December 2008 attended; in addition to the hosts, players travelled from Algeria, the Democratic Republic of Congo and Egypt.

Locally, matters were organised by Vinal Basanta, the President of the Mauritius Table Tennis Federation and Cédric Rouleau, the Technical Director; a hall which housed 20 table tennis tables was provided.

Three star balls were available throughout with practice balls used for multi-ball training.

“I conducted ten training sessions, each day focusing on a basic topic. Before each training session I always held a short technical meeting with all coaches where I explained the main target of the session and how to arrive at that target. One day was a reserved for a tournament; the last day was free because the organiser provided a very pleasant trip for all in a catamaran. My special thanks go also to all coaches who helped during this camp.” Joze Urh

Impressively, at the Challenge tournament, Egypt secured first place in both the Boys’ Singles and Girls’ Singles events. In the former, Omar Ehab finished in top spot ahead of colleague Wael Yassin with the local player Ryan Sahajasein in third place.

However, it was the counterpart Girls’ Singles event that attracted the greatest attention. It was won by 10 year old Hana Goda. She finished ahead of colleague Fawzy Kanzi with Algeria’s Madina Seddiki and Farhi Asma Lina in third and fourth places respectively.

Less than two months ago, Hana Goda had won the Under 13 Girls’ Singles title at the 2018 Tunisia Junior and Cadet Open, as always accompanied by her mother, Radwa Azab, with Hisham Ismail, her coach also present, she left a lasting impression on Joze Urh.

“The training was very good with Joze Urh of Slovenia. We were taken through some physical training that will help us and other basic techniques in the sport. I must admit that it was not very easy to emerge as winner in the girls’ event because there were good players from Algeria, Congo DRC, Mauritius and my compatriots from Egypt. I played hard and won all my matches three-nil. I am so happy that my coach was beside me in all my matches.” Hana Goda

Now Hana Goda looks forward to the ITTF World Hopes Week and Challenge to be in July in Spain.

“I will train hard for next two months. I am really looking forward to becoming the Word Hopes Champion for 2018.” Hana Goda

Meanwhile, for Dr. Alaa Meshref, former President of the Egyptian Table Tennis Federation and now ITTF Executive Vice President was not surprised by the performance.

“She is superb and it was expected she would win. I want to see her performance at the World Hopes; she has still one year left in the age group.” Dr. Alaa Meshref

NB: The year of birth is stated in brackets 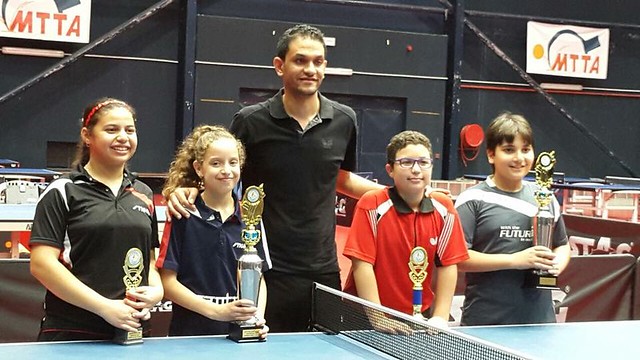