At the final hurdle, the no.7 seed, he beat Fan Zhendong, the top seed to arrest the coveted title and thus laid more than one ghost to rest.

It was a most apt outcome; it reversed the decision of five years earlier when also in India, in the final of the Boys’ Singles event at the Volkswagen 2012 World Junior Championships in Hyderabad on Sunday 16th December he had suffered defeat. On that occasion, he had been beaten by Fan Zhendong by a similar margin to which in Ahmedabad he gained success. He had lost in six games (10-12, 7-11, 11-8, 11-6, 11-8, 11-4).

Furthermore, he allays the  fact that Lin Gaoyuan is the nearly man; in 2012 it was the third consecutive year that he had lost in a World Junior Championships Boys’ Singles final. He had been the runner up in 2010 in Bratislava and in 2011 in Bahrain.

Equally if there is some divine guardian of sport, was it not justice that he won? Earlier in the year at the quarter-final stage of the Men’s Singles event at the Liebherr 2017 World Championships in Düsseldorf, he led colleague Xu Xin 10-6 in the seventh game. Xu Xin performed one of his trademark recoveries to emerge victorious; at 10-7 winning the point with an edge ball, the contact no thicker than a coat of paint!

A successful conclusion to the tournament for China and in most unusual circumstances; when has it ever happened that players who have lost their opening matches in a major tournament have progressed contest the final and when have the two players who finished in third places in their respective initial phase groups, decided the bronze medal match?

Notably Chuang Chih-Yuan trailed 2-6 in the fourth game after losing the first three, it looked as though he had thrown in the towel; he risked everything in gay abandon. He won the game and then saved one match point in the sixth game before claiming victory.

Lin Gaoyuan, Fan Zhendong and Lee Sangsu are now eligible to receive invitations for the Liebherr 2017 Men’s World Cup to be staged in the Belgian city of Liège from Friday 20th to Sunday 22nd October.

“I’m very excited now that I’m qualified to play in the World Cup. Before playing in the tournament, I didn’t even think about playing at the World Cup, and my goal was just to play each and every match well.” Lin Gaoyuan

However, the acceptance of Fan Zhendong is in doubt; his appearance is pending on ongoing ITTF disciplinary investigation. 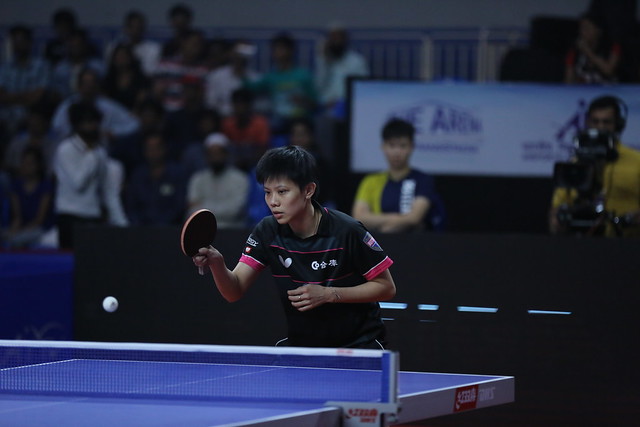