The players are on a quarter-final quest on Day Two of the Main Event at the Seamaster 2017 ITTF World Tour Czech Open, Friday 25th August.

Kid table tennis Tomokazu Harimoto had a tough time in his opening encounter of the Men’s Singles against Kazakhstan’s Kiril Gerassimenko. He won in seven games, dropping one game 11-1 along the way. He now faces an all Japanese clash when he comes up against Maharu Yoshimura. Yoshimura had a much simpler time winning his opening round match and will have a lot of energy to spare. Can he slow down the rapid rise of Harimoto?

At the bottom of the draw Kenta Matusdaira and Hugo Calderano will provide the entertainment on day two. The no.2 seed from Japan is renowned for his close to the table counter play, while the Brazilian is always looking to take a step back from the table and get some big loops in from middle distance. The opposing styles should create some epic rallies.

Meanwhile at the top of the draw, no.1 seed Timo Boll will face Chinese challenger Xue Fei. Xue survived a seven game match in the first round, and no doubt will struggle see off the German superstar any easier than that. Boll should dominate, but if the Chinese bench has their tactics sorted on Timo, then maybe things could get interesting.

Japan’s Kasumi Ishikawa is looking to defend her no.1 seeding on day two of the Women’s Singles. Her opponent, Sweden’s Matilda Ekholm. While Ishikawa cruised in her opening match, Ekholm came out on top in game that went the distance. She will chase down every ball, but her legs may be a little tired from yesterday’s marathon match. However, she may have a tactical advantage over her opponent. Both players are left-handed. Ishikawa usually utilises her southpaw style to find angles on her right-handed opposition, making fast balls wide to the forehand. This won’t work against Ekholm, and Ishikawa will be more reliant on power to get through the Swede’s defences.

Miyu Maeda will look to continue her good run in Olomouc when she takes on Georgina Pota. The Hungarian is the no.10 seed, but Maeda won’t be bothered by numbers after already seeing off the no.6 seed.

Japan is only absent in one of the main event match-ups, and that is at the bottom of the draw as Germany’s Han Ying takes on Austria’s Sofia Polcanova. Han cruised in the previous round winning 4-0, while Polcanova survived in seven games. Expect the no.2 seed to have a tougher time today.

Podium on the horizon

The quarter-finals of the Men’s and Women’s Doubles open the action on day two. The top four seeds in the Women’s Doubles are all safely through and there is no reason to suspect any upsets in this round. Meanwhile in the Men’s Doubles three of the four top seeds are still in contention, with the duo from Iran causing the only real upset. The no.4 seeds Robin Devos and Cédric Nuytinck could be in trouble though. The Belgians are up against Hugo Calderano and Simon Gauzy. The Brazil/France combination is the no.6 seed here in Olomouc but odds have to favour them in the quarterfinal encounter.

Checkout the full schedule of play here and be sure to catch all the action live on itTV. 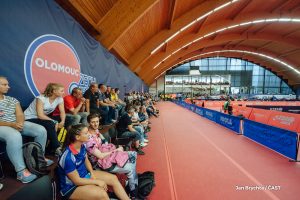