One year back at the Perfect 2016 World Team Championship in Kuala Lumpur, Turkmenistan's Ylyas Llanazarov was the youngest participant at seven years of age.

One year later, at the Liebherr 2017 World Championships, he still remains the youngest.

Born on 29th May 2008, the young Ylyas probably received the best birthday gift ever, as he finally played his debut match at the World Championships.

Ylyas paired with Didar Shaymanov and together they played the first round of the Men’s Doubles preliminary event.

However, Ylyas wasn’t really disappointed, instead it was probably the biggest day of his life so far. He was present at Kuala Lumpur at the 2016 World Team Table Tennis Championships, also his first ever, but he did not get a chance to play even a single match.

This shy, yet forever smiling nine year-old said, “This was a lot of fun, especially playing the first match on my birthday. I really want to improve my game further. I just want to keep playing more and more.”

Ylyas is accompanied by his father, Agamyrat Allanazarov, the man behind bringing this nine year old to the sizzling world of table tennis. “I am happy that he is here, he feels confident being here in Düsseldorf. But he has a long way to go if he wants to be the best in the world.”

When asked, what his favorite stroke is and what he is good at, pat came the reply, “My backhand is really good. Right now my blocking is strong, but I also want to get better with attack.

“My favourite player is Zhang Jike, my father takes videos of him and we watch his matches all the time at home. I love to watch him play.” – Ylyas Llanazarov

In a span of one year, when we last spotted the seven year old Ylyas in Kuala Lumpur, he was a bit reserved and shy. But one year later in Düsseldorf, Ylyas is a confident young nine year old.

Ylyas has been working hard back at home. He attends school from 8:30am – 2:30pm and trains from 3:30pm – 6:30pm, six days a week. His favorite subject is mathematics, working well his calculative mind.

Agamyrat still does not want Ylyas to take part in many tournaments, and right now his focus is to work on Ylyas’ technique and improve his physical fitness. “He is quite lean at the moment, to compete at the world level he needs to build up muscle and gain more strength.”

He further continued, “The state government supports us well, the finances with the federation are not good enough right now. Additionally, I am always supporting Ylyas for anything that he needs for his training. I just want him to be the best!”

Despite being knocked out on the first day, Ylyas is no tourist in Düsseldorf. He is accompanied by his father, and together they sit in the main hall to watch the best players in the world playing. Watching and learning is great for Ylyas right now, the very fact that he is present here is a huge motivation for him.

This young lad is just a regular kid. He loves playing Clash of Clans and Subway Surfer on his father’s phone and enjoys eating pizzas and hamburgers.

“Many players are taking photos with me here, I feel so special. They all come and try to talk to me, maybe I need to learn English better.” – Ylyas Llanazarov

The boy is on the right track. He has his eyes set on the right target, and with a support at his end, sky is the limit for the young Turkman. 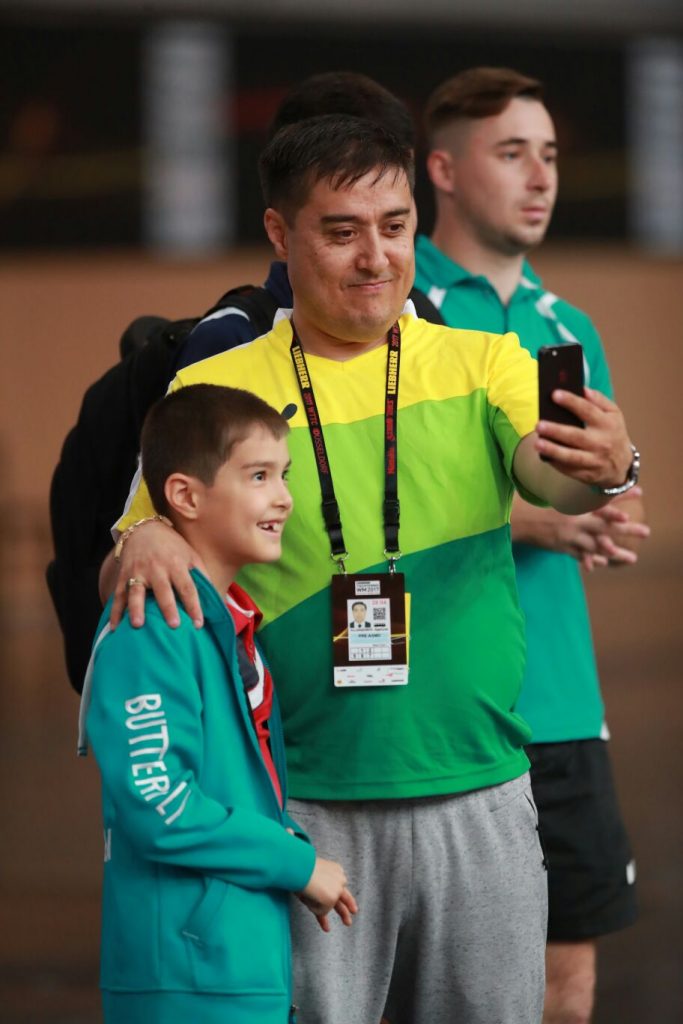