Winner on the ITTF World Junior Circuit on home soil in Cairo in March, Egypt’s Youssef Abdel-Aziz was named earlier this year as the ITTF Dream Building Ambassador.

Furthermore, it is a busy time for the 16 year old who, having played in such events as the 2014 ITTF World Cadet Challenge in the Caribbean island of Barbados is now a seasoned competitor.

Undoubtedly, he has the realistic possibility of an invitation to attend the 2016 ITTF World Junior Circuit Finals to be staged in the Indian city of Indore next January.

Currently he is the leading name on the Boys’ Standings from Egypt and he has met the necessary two continent criteria; thus with Indore and other international events in mind, intense training is very much the order of the day.

Recently from Sunday 3rd to Tuesday 26th July, he attended the Werner Schlager Academy in Austria; presently he is in Heidelberg. In the German city, he will conclude a week-long stint on Friday 9th September before returning in one month’s time. He plans to be in Heidelberg from Monday 3rd to Friday 7th October.

“The training camp at the Werner Schlager Academy was really good for me; it was three weeks preparing for new season surrounded by excellent players such as Paraguay’s Marcelo Aguirre and Portugal’s Marcos Freitas plus top players from my country”, said Youssef Abdel-Aziz. “They were all preparing for Olympic Games; I do hope that this experience will help me to prepare well, not only for new season but also for the 2018 Youth Olympic Games 2018.”

Looking ahead but time travels fast; was it really over two years ago since we were in Nanjing?

“This fall my plans are to practise and play league matches in Germany”, added Youssef Abdel-Aziz. “I’d like to add more ITTF World Junior Circuit tournaments in 2018; this year my federation sent me to Safir but I feel that many more tournaments are needed in order to be competitive and to climb the World rankings.”

Safir is the overall title for the well-established tournament in Örebro of which the Swedish Junior and Cadet Open is a constituent part.

“In Austria I had numerous training sessions on a one-on-one basis with Peter Gardos”, continued Youssef Abdel-Aziz. “I am lucky that he is in Heidelberg too and during last weekend we already had couple of multi-ball sessions.”

Learning and improving but although Indore is undoubtedly a goal, Buenos Aires is an even bigger goal.

“Long-term speaking my plans are to perform well at the 2018 Youth Olympic Games in Argentina”, stressed Youssef Abdel-Aziz. “If I continue working like this, I should have no big issue qualifying and then in Buenos Aires I will have two chances; singles and with my Egypt team.”

“With one player per country my chances to qualify high are real and in 2018 I will be in my prime junior days”, concluded Youssef Abdel-Aziz.

Ambitious and most certainly the Egyptian teenager has impressed Peter Gardos, who is the father of well-known Austrian international, Robert Gardos and Krisztian Gardos; the latter will be on duty at the forthcoming Paralympic Games in Rio de Janeiro.

“Youssef has excellent hands; nice touch for the ball, his body is giving him potential to develop into a true athlete; at the moment his basic table tennis position favours backhand strokes, he needs to pay more attention to small body adjustments”, said Peter Gardos. “As with almost all players with a good touch he compensates a lot with his good wrist; now, he is not aware of how important it is but later this can make a big difference, his backhand is very good.”

Peter Gardos is coach of considerable experience, over 40 years in the role, having been the mentor for the celebrated BVSC Club in his native Hungary. 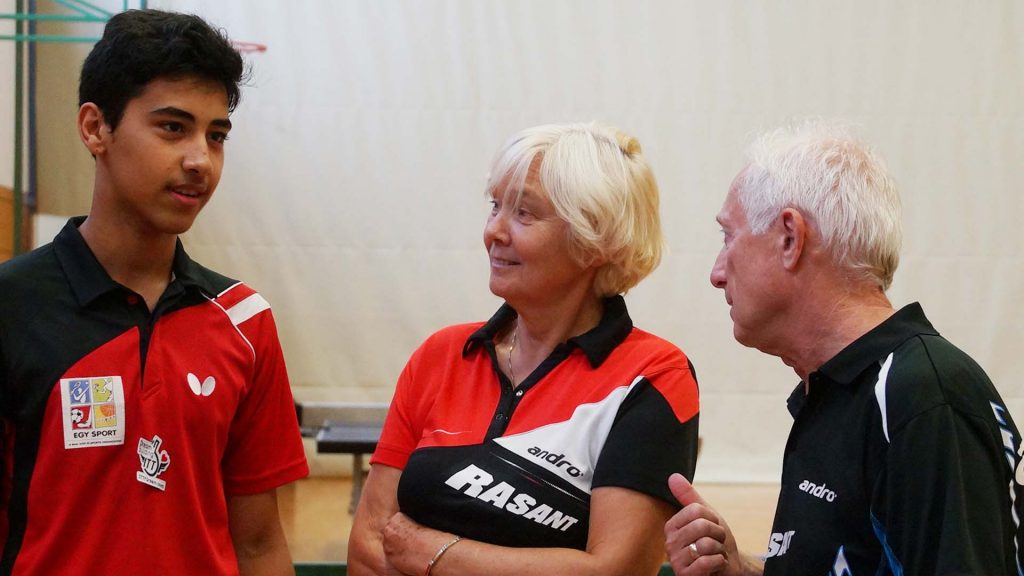 “I have been retired for three years but now I feel less pressure to deliver results; I keep working at the Werner Schlager Academy and in Heidelberg with Eva”, said Peter Gardos. “My table tennis was never work, it is simply the lifestyle and it is also now.”

A lifestyle and Peter Gardos has views on lifestyle.

“This year I have been observing the difference between the best Asian and European players; unfortunately only a few Europeans are truly thinking how to become better than Asians”, he stressed. “They are not ready for extra work, except Ovtcharov; maybe life in Europe is too good, there are needs to change philosophy in order to catch the very top world players.”

Perhaps those thoughts can be transmitted to Youssef Abdel-Aziz?

“Youssef and I have a very good working relationship; he asks to stay after the group practice for multi-ball mostly working on short balls and third ball attack”, added Peter Gardos. “He is in his first junior year and it is the right time to work on his physical fitness and different table tennis exercises; it is good that he is relaxed but better fitness will bring him better stability.”

“In matches he has excellent moments but in the long-term, he will need to show more consistency in terms of motivation, will-power and playing style”, added Peter Gardos. “We have a briefing with him daily and we make sure that he has a good ratio of group and individual training.”

Everything at hand but of course Yousse fAbdel-Aziz is somewhat alone.

“Here in Heidelberg, the programme is different; he is the only Egyptian player and it is not so easy for him”, continued Peter Gardos. “I is good opportunity to change some habits but it is also has its dangers because certain mental strength is needed.

A very good report from Peter Gardos; it is the same from Eva Jeler, the head coach in Heidelberg.

“Youssef has a very pleasant personality and good communication skills; this weekend he has been introduced to a truly demanding schedule; we practise three times a day, each day for eight hours”, said Eva Jeler. “There is no reason to be different because here are good conditions for young players, good gymnasium, four coaches with small player to coach ratio; venue, food and accommodation are in the same building.”

It is a very professional organisation but demanding.

“We have a young group but with a physical training and Peter’s multi-ball practice there is a high work load for Youssef”, added Eva Jeler. “During the weekend Youssef will also practise with an older group; generally our programme requires a lot from players during one week and I believe that it sets the standards needed for a player of Youssef’s age.”

A great deal required but from Youssef Abdel-Aziz there is a most positive response; the ambassador can dream of a bright future.

Shaping the Future of High Performance and Development