Like many other sports, Table Tennis began as a mild social diversion. It was probably played with improvised equipment in England, during the last quarter of the 19th century. Though Table Tennis evolved, along with Badminton and Lawn Tennis, from the ancient game of Tennis (also known as Jeu de Paume, Real tennis, Court Tennis or Royal Tennis), the game was developed after Lawn Tennis became popular in the 1880s. 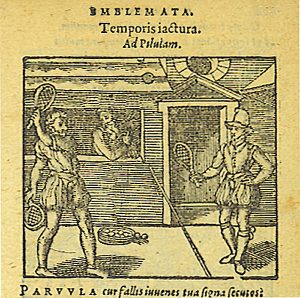 The earliest surviving action game of Tennis on a table is a set made by David Foster, patented in England in 1890 (No.11037): Parlour Table Games, which included table versions of Lawn Tennis, Cricket and Football. The Lawn Tennis game featured strung rackets, a 30mm cloth covered rubber ball, a wooden fence set up around the perimeter of the table, and large side nets extending along both sides. 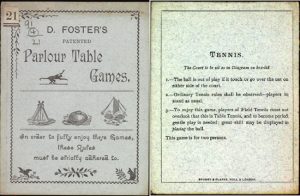 Foster’s rules, found at Cambridge University by Steve Grant (USA). The rules are very brief (unlike those for the companion games of table cricket and football). Note rule 3, which mentions ‘Table Tennis’. Steve also discovered that Foster patented his game compendium in Canada.

Game manufacturers tried many experiments to market an indoor version of Lawn Tennis, including board and dice games, Tiddledy Winks variations, card games, racket and balloon games and others. 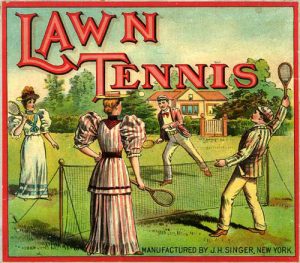 Lawn Tennis board game by Singer (USA), another indication that the sport was very popular in the 1880s ITTF Museum.

“This arrangement is adapted for ordinary lawn tennis, and for a modified game to be played indoors, say upon a billiard or dining table. In the latter case the poles are supported in brackets clamped to the table and the ends of the cord may be clamped by the cam arrangement, or fastenend under the table, or weighted.”

Duke correctly concludes that this “quite possibly is now the earliest known reference to a table version of tennis (and, importantly, accurately dated).” However, no evidence has been found that such a game was developed at that time.

Steve Grant (Ping Pong Fever, 2012, USA) found mention of one James Devonshire (ENG), who John Jaques claimed invented Table Tennis in a 1901 interview published in The Echo. Subsequently Alan Duke found in The Official Journal of the Patent Office that:

One year later famous game makers Jaques of London released their GOSSIMA game. This game borrowed the drum style battledores from the Shuttlecock game, and used a 50mm webbed wrapped cork ball, with an amazing 30cm high net that was secured by a belt-like strap under the table. Only 2 examples are known to have survived. 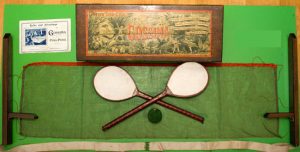 Neither of these action games were successful, due to the ineffective ball: the rubber ball had too wild a bounce, while the cork ball had too poor a bounce. Jaques continued to advertise Gossima throughout the 1890s, but it was not until c.1900, when the celluloid ball was introduced to the game, that the concept of tennis on a table became successful. Steve Grant has traced the name Ping Pong to an 1884 song by Harry Dacre. The distinct sound of the celluloid ball bouncing off the drum rackets quickly led to the use of the same name. This can still be demonstrated today using the antique rackets! As the name Ping Pong caught on, Jaques changed the name of his game to “Gossima or Ping Pong” and soon afterward, to “Ping Pong or Gossima”. Ultimately the name Gossima was dropped.

The game quickly caught on with the public, marketed under many different names:

Gradually the two most popular names prevailed: Ping Pong, and Table Tennis. However, these competing names caused some problems, as two associations were formed, and with different rules for the game some confusion resulted. Ping Pong was trademarked in 1900 by Hamley Brothers in England, and soon afterwards Hamleys became “jointly concerned” with Jaques. They rigorously enforced the Ping Pong trademark, requiring use of their Ping Pong equipment in Ping Pong tournaments and clubs. Parker Brothers, who acquired the American rights to the name Ping Pong, similarly enforced the trademark. Eventually it became clear that for the sport to move forward, the commercial ties had to be severed.

Timeline of Table Tennis Milestones
with thanks to the late Ron Crayden (ENG)
and his book, The Story of Table Tennis – the first 100 years
with updates by the ITTF Museum