Sun and Wang Take Down WTT Cup Finals, going back to back in WTT Series 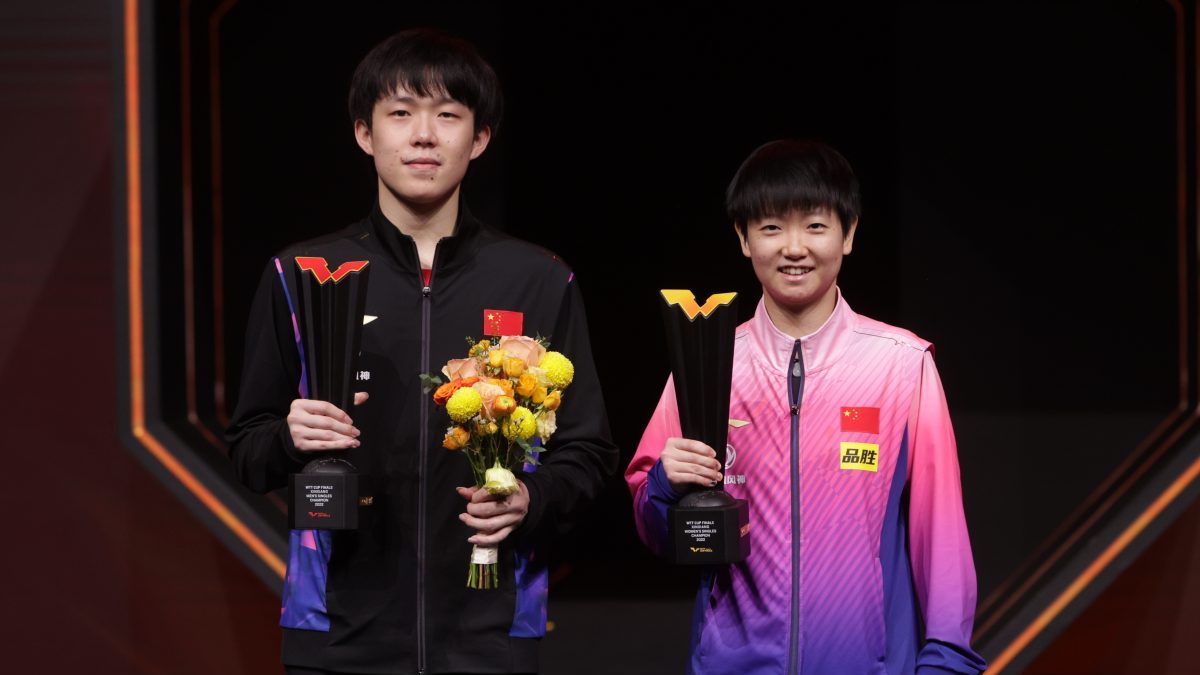 WTT Cup Finals Xinxiang 2022 presented by China Construction Bank has reached its finale on Sunday 30 October as Wang Chuqin (CHN) and Sun Yingsha (CHN) were crowned champions. The marquee event of the WTT Series provided blockbuster entertainment to a sold-out crowd during its four days of action.

It was back-to-back WTT Cup Finals titles for the top seed, having won the inaugural event in Singapore last year. The win caps off a sensational October for Sun Yingsha, with the WTT Cup Finals title adding to the WTT Champions Macao win earlier this month. The victory also further tightens her grip on the World No.1 ranking.

In the Men’s Singles, local favourite Wang Chuqin was crowned champion after beating Tomokazu Harimoto (JPN) with a 4-2 victory (8-11, 11-8, 11-9, 11-8, 8-11, 11-7) in a pulsating match on Infinity∞Arena. Wang Chuqin brings home his third WTT Series title of the year, adding to his successful campaigns at WTT Star Contender European Summer Series and at last week’s WTT Champions Macao. The result also plays a significant part in reshaping the ITTF Table Tennis World Rankings with Wang climbing to a career best position of World No.3.

WTT Cup Finals Xinxiang 2022 was the final marquee event of this year’s WTT Series, the official professional table tennis series of events. Sold out for every session, the event was a complete success setting impressive standards on both TV broadcast and digital platforms, like last year’s event held in Singapore in December 2021.

Liu Guoliang, Chair of World Table Tennis Board, commented, “Located in the heart of China, Xinxiang has a very strong table tennis fan base. The holding of WTT Cup Finals Xinxiang will have a radiating effect on the promotion of table tennis throughout China. However, our goal is to turn table tennis into a truly global sport, and we hope table tennis becomes the bridge connecting the world again.”

Over the past six weeks, World Table Tennis and the International Table Tennis Federation were able to organise the only major events in China since the Beijing 2022 Games: WTT Cup Finals Xinxiang, WTT Champions Macao, and the ITTF World Team Championships Finals Chengdu.

Adriana Diaz, World No.12, who participated in all three events, said, “Not many people can come to China because of the pandemic. We’re just very lucky and I’m just so grateful that I get to play again and represent Puerto Rico.”

With 15 events across four continental federations, 2022 will be remembered as a landmark year for World Table Tennis. Every tier of the pyramid of events has now been successfully delivered, including the first-ever WTT Grand Smash in Singapore in March, the inaugural WTT Champions event in Budapest in July, and the first WTT Series events in China. World Table Tennis has managed to re-imagine and re-energise the sport to match audiences’ needs, creating more touchpoints with fans eager to see the world’s best players facing each other more often.

Steve Dainton, ITTF Group CEO and World Table Tennis Director, commented, “The WTT Series really came to life this year, as we successfully introduced all the marquee events. I would like to thank the Chinese Table Tennis Associations and the Chinese authorities for helping us end the year with such high hopes for the future so that more and more people can love table tennis. We discovered the fully professional platform created for the athletes, exciting events merging sport and entertainment for fans, and the compelling narratives for the sport. We built an amazing launchpad this year, and we will aim even higher in 2023 with even more events.”

Every year, the WTT Series includes:

The WTT Series is complemented by the WTT Feeder Series, a lower tier of events designed for elevating grassroots talent to global stars, and the WTT Youth Series, where the future stars begin their professional journey. This event structure establishes a straightforward journey from Day 1 to World Number 1.