Four years since the World Team Championships was most recently staged, times have changed.

On Tuesday 4th October, as the main draw was conducted for the 2022 ITTF World Team Championships Finals Chengdu presented by China Telecom, eyes focused very much on the teams, who in that period of time, have risen in status. 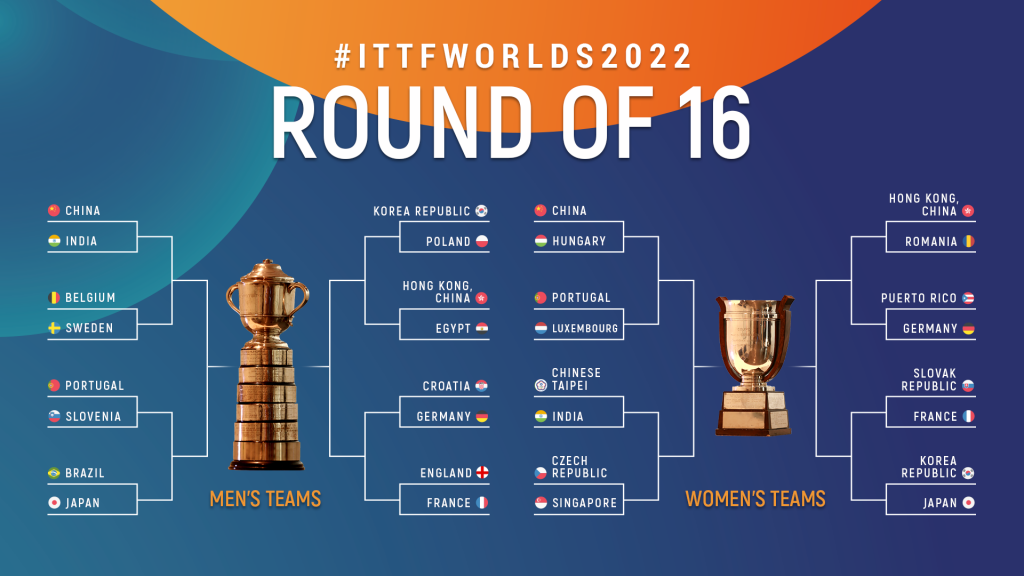 In the men’s event, Slovenia who finished in second place in their men’s team group, behind China, face Portugal in the opening round; for Slovenia, Darko Jorgic, winner of the Europe Top 16 Cup earlier in the year, may well prove pivotal in a fixture too close to call.

Likewise, it was group runners up spot for Brazil who confront Japan; in their concluding group contest they overcame Slovakia. Hugo Calderano remained unbeaten in the group stage, Vitor Ishiy and Eric Jouti provided valuable support.

“We were fighting for the second place in this match”, reflected Ishiy. “It’s nice to go to the last 16 with the victory.”

Similarly, it was second group spot for Egypt behind the Republic of Korea; they oppose Hong Kong, China, a contest Mohamed El-Beiali relishes. “We’re very happy to be in such a big stage, we’re looking forward to the knockout stage. No matter who we meet, we’ll try our best and win.”

Delighted to be breaking new ground, in the women’s team event it is no different; pride of place going the small Caribbean Island of Puerto Rico, second in their group behind China. In round one they face Germany.

Daniely Rios, who against both Malaysia and the United States had been the heroine, on each occasion winning the vital fifth match of the fixture, reflected the mood of Puerto Rico.

“We are in the best 16 in the World Championships, I am so happy for that. I’m really happy that we made it for first time ever; this is history for my team. If my kids see this in the future, they will say ‘she made it!’”

New horizons for Puerto Rico but even if your team has been there before; progress to the last 16 of a World Championships is still very special.

Soo Wai Yam Minnie underlined the importance for Hong Kong, China, in the women’s event; a team bolstered by their bronze medal at the Tokyo 2020 Olympic Games.

“It’s my second time participating a World Championships”, said Soo who four years ago in Halmstad beat the redoubtable Ding Ning, at time Olympic champion, in the semi-final encounter against China. “I really enjoy working together with my teammates,” she added. “We will try our best no matter what opponents we play against in the future.”

Hong Kong, China, faces Romania in round one, a nation who excellence in the sport dates back to the very beginnings of the sport.

Buoyant players, but the example is set by China, in the men’s event India provides the opening round adversary; in the women’s it is Hungary. They are the clear favourites to retain their titles but as Wang Manyu explained there is no complacency.

“We believe that we will face many difficulties in the second stage, and we will be fully prepared”, explained Wang. “Most importantly, all the team members will stay united and play even better.”

Play the opening round of both the men’s and women’s events commences on Wednesday 5th October.

The schedule for round of 16 for both the men’s and women’s events is available here. Follow all the action here, access key info in the media guide here, and obtain free photos for editorial use here.