Eyes focused on host nation's initial opponents, with a return to the era of Ping Pong Diplomacy 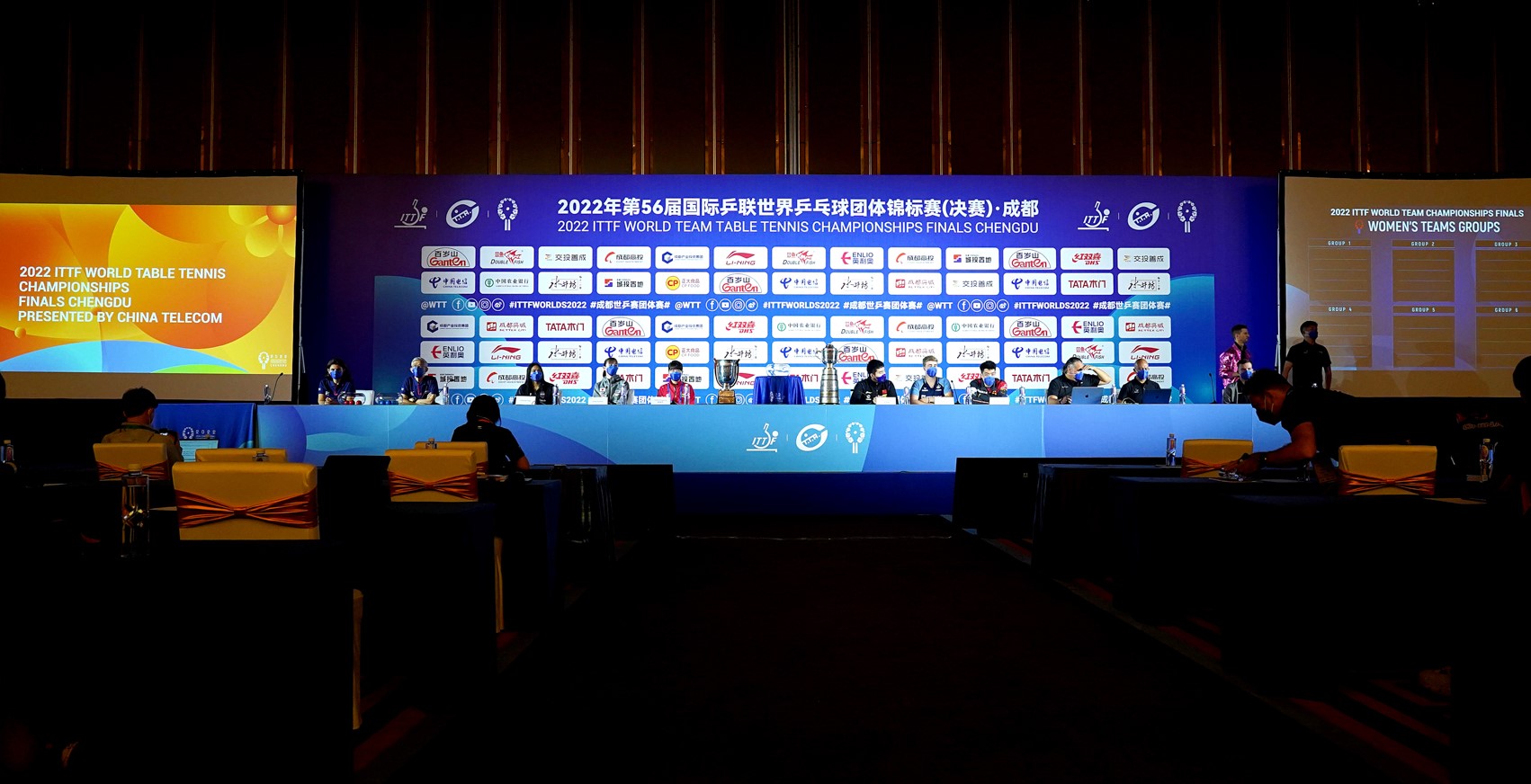 Defending champions China occupy the top seeded positions in both the men’s and women’s team events at the 2022 ITTF World Team Table Tennis Championships Finals Presented by China Telecom; the initial stage groups being determined at the draw ceremony on Wednesday 28th September.

Overall, 32 teams compete in the men’s event, 28 in the women’s competition.

Notably for both Chinese teams, there is a sense of history, a return to the era of Ping Pong Diplomacy. It is just over 50 years ago since a Chinese team landed in Detroit; in both the men’s and women’s events China is drawn in the same group as the United States.

China with an abundance of riches starts as clear favourites; seasoned players such as Ma Long and Fan Zhendong form the backbone of the men’s team, for the women, Chen Meng, Sun Yingsha and Wang Manyu are no strangers to the biggest stage of all.

The burning question is how young players will respond.

In the men’s team event Germany, the second seeds, are in the same group as France; for Germany Dang Qiu, the recently crowned European champion, leads the line. Brothers Alexis and Felix Lebrun appear for France. None were under serious first team consideration four years ago in Halmstad.

Similarly, at the Liebherr 2018 World Team Championships, Truls Moregard played just one match; he is now a key player for Sweden, the fifth seeds. In their group the next rated outfit is England; the team Sweden beat in Halmstad to gain a semi-final place.

Undoubtedly, Mattias Falck is pivotal to Swedish success as is Tomokazu Harimoto for Japan. They are in the same group as Hong Kong, China, and Romania.

Promoting youth, Eduard Ionescu, winner of the Under 19 Boys’ Singles title at the European Youth Championships, appears in the Romanian squad.

Crucial players, it is the same for the Republic of Korea, the fourth seeds and Brazil, the sixth seeds. Jang Woojin and Hugo Calderano are the respective team leaders.

For the Republic of Korea, Egypt and the Czech Republic comprise the main rivals; for Brazil next in line is Portugal, the team they beat in the group stage in Halmstad, on that occasion against the odds.

Meanwhile, in the women’s team event, Japan, the second seeds, face European opposition in the guise of Hungary, Poland and Slovakia. The Land of the Rising Sun includes Hina Hayata, Miyuu Kihara and Miyu Nagasaki, all players born this century, they make their World Team Championships debuts.

Only Mima Ito remains from the silver medal winning team at the Tokyo 2020 Olympic Games; for Hong Kong, China, the bronze medallists it is very different.

Once again the names of Doo Hoi Kem, Lee Ho Ching and Minnie Soo Wai Yam appear on the team list. The third seeds, Brazil, with sisters Bruna and Giulia Takahashi on duty are their main rivals.

Much will depend on Bruna Takahashi, as it will for the Republic of Korea, the fourth seeds, spearheaded by Jeon Jihee, she is the player with the greatest experience in the selection.

Meanwhile, Germany, the fifth seeds, the staunch defensive skills of Han Ying at the head of the order, are drawn in the same group as teams that in recent years have made immense progress. It is a chance for Egypt and India to shine.

Dina Meshref and Hana Goda feature in the Egyptian line-up; the Indian squad is spearheaded by Manika Batra, the 2018 Commonwealth Games champion.

Overall, 16 teams in each of the men’s and women’s events qualify for the knockout stage; play starting on Wednesday 5 October. Teams finishing in first position in each group will be drawn in the seeded positions; second placed team will be drawn randomly against a group winner or into unfilled seeded positions; additional places will be filled by the highest-ranked third-place group finishers.

In the men’s event the highest rated teams were allocated the top seeded position in each of the seven groups according to their world ranking; immediately following teams ranked no.8 to no.10 were drawn randomly in groups no.5 to no.7; teams ranked no.11 to no.14 randomly to groups no.1 to no.4.

Teams ranked no.15 to no.28 were drawn using the snake system, the remaining four teams to groups no.1 to no.4.

In the women’s event the highest rated teams were allocated the top seeded position in each of the six groups according to their world ranking. Teams ranked no.7 to no.9 were drawn to groups no.4 to no.6; teams ranked no.10 to no.12 to groups no.1 to no.3.

Teams ranked no.13 to no.24 were drawn using the snake system, the remaining four teams to groups no.1 to no.4.