The historical Singapore Smash drew to a close with a sold-out crowd celebrating the success of Chen Meng and Fan Zhendong. The two-week table tennis spectacle has indeed captivated the imagination of the local crowd and a global television audience.

The first-ever Singapore Smash marked the start of a grand new legacy for table tennis, and the rousing success of the recently-concluded event ushers in a new era that augurs well for the sport. The players competed in front of a sell-out crowd, with the newly-introduced hospitality packages a hot ticket and favourite among fans during the later stages of the event.

Singapore Smash came to a magnificent conclusion on Sunday 20 March as Olympic gold medallist Chen Meng and men’s world No. 1 Fan Zhendong were crowned the singles champions in front of a packed Infinity Arena.

Said Chen Meng, who will regain the world No. 1 spot next week: “This is the first ever WTT Grand Smash, so we both really wanted to win it. Manyu was trailing at some points but she was constantly looking for solutions and putting pressure on me. I value this title very much; it’s my first title after the Tokyo Olympics, so this is very encouraging for me. I’ve trained hard and prepared well for this event, and I’m really glad my effort has paid off.”

Wang Chuqin and Sun Yingsha took the Mixed Double title. Both of them also won the Men’s and Women’s double, with Fan Zhendong and Wang Manyu respectively.

Steve Dainton, ITTF Group CEO, said: “We’ve witnessed history here, and I would like to congratulate the first-ever winners of Singapore Smash. This is indeed the dawn of a grand new legacy for table tennis. As host of the first-ever WTT Grand Smash, Singapore has truly lived up to its status as a world-class venue for top international sport and entertainment events. In the next few years, Singapore Smash will be the iconic extravaganza that signals the start of the annual table tennis season. Our hope is for the Singapore Smash to establish its position as one of the key highlights of Singapore’s sporting calendar.” 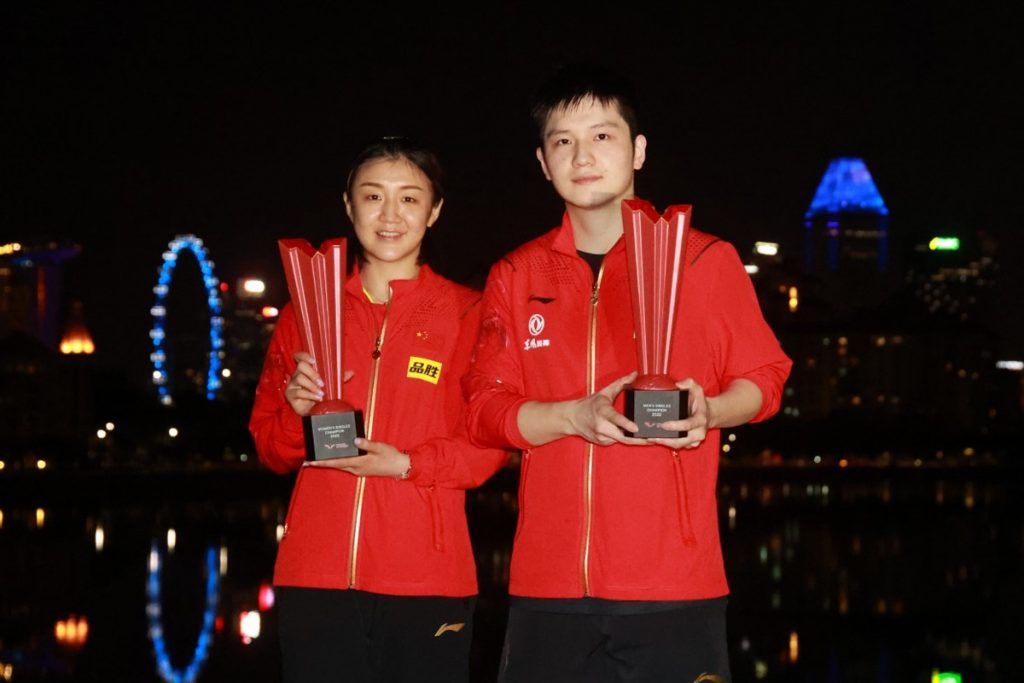 The WTT Grand Smashes form the foundation of the WTT Series and the Singapore Smash is the first of the four new pillars of professional table tennis. The singles finals rounded off two weeks of exciting table tennis action taking place within the halls of the OCBC Arena at the Singapore Sports Hub. The March 7-20 Singapore Smash featured a star-studded line-up that included women’s world No. 1 Sun Yingsha and two-time Olympic singles champion Ma Long, as well as men’s doubles world champions Mattias Falck and Kristian Karlsson. In addition to the sport’s biggest names, the next generation of rising stars were also in attendance, including world youth champions Xiang Peng and Kuai Man.

Local fans had plenty to cheer for as well, with Singapore men’s doubles pair Clarence Chew and Ethan Poh beat the 2019 World Championship finalists, Spaniard Alvaro Robles and Romanian Ovidiu Ionescu, en route to the quarter-finals. They put up a valiant fight before falling to Chinese pair Fan Zhendong, the men’s singles world No. 1, and Wang Chuqin.

Spectator Benny Tan, 35, said: “Overall, I had an amazing time at the WTT Singapore Smash as the event was very well-organised and had an electrifying atmosphere while I was there. As a sports enthusiast, I couldn’t pass up the opportunity to attend a world-class sporting event live in person and watch top table tennis players like Fan Zhendong and Ma Long battle it out in the arena.”

The event also saw the launch of the Infinity Arena, which will be present at all WTT Grand Smashes, as well as WTT Cup Finals and WTT Champions events. As the main show court for Singapore Smash, the Infinity Arena signifies the limitless possibilities that await the sport of table tennis.

Singapore Smash players were full of praise for the event, with men’s singles quarter-finalist Qiu Dang saying: “The event is very nice, it’s very organised and structured. Everything is done well here — the complex, the hall, the food also the hotel is very beautiful. It’s very good for the players to play and participate. The halls are optically different and also beautiful.”

Fan favourite Ni Xia Lian of Luxembourg, who reached the women’s doubles semi-finals with compatriot Sarah De Nutte, added: “We are very happy to be here and we’re very appreciative that this event is happening during such a difficult period. Everybody has worked so hard and spent time and energy, and we’ve received so much help. People in Singapore are so warm and we are always moved. I just feel sorry we don’t have much time to return the warmth to the people, but what we can do is we play our best to show our appreciation, and we hope people love our game.” 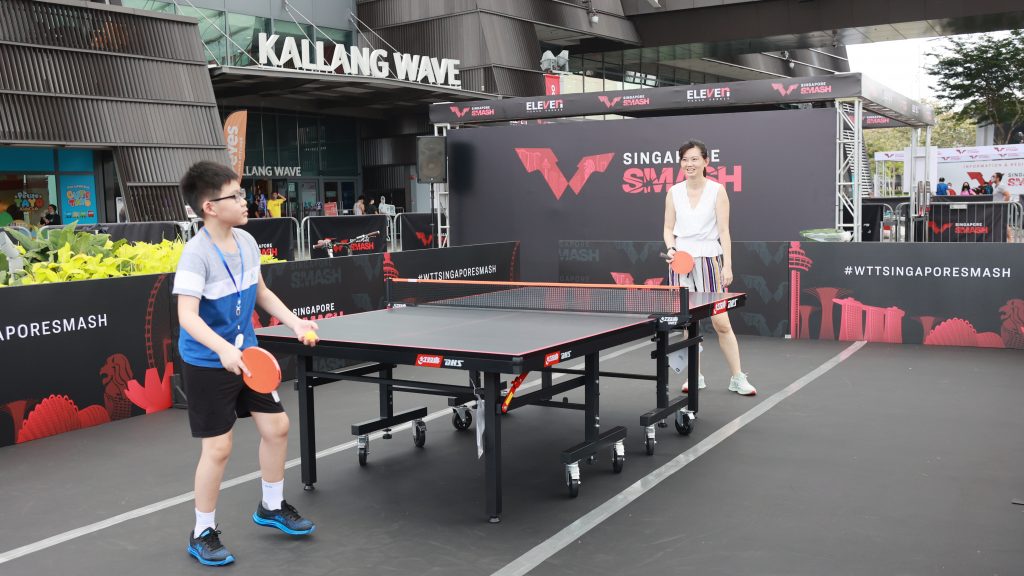 Outside of the competitive arena, meaningful community programmes were organised for the public to try their hand at table tennis and to learn more about the sport. These include a Smash Zone community challenge for recreational paddlers who were inspired by the thrilling battles in the Infinity Arena and a virtual meet and greet session between young table tennis players and Singapore Smash stars. Local non-profit organisation Table Tennis 4 Good was also given the spotlight at Singapore Smash, with its “Beat Dementia And Parkinson’s” and “Table Tennis for the Elderly” programmes on display at the Singapore Smash Zone at the OCBC Square.

Singapore Smash also cemented its status as an event for all to enjoy, whether or not they are followers of table tennis. In addition to the enthralling battles at the tables, the audience also enjoyed entertaining pre-match performances by the likes of top local artists ShiGGa Shay and Shye. Other acts included Singapore’s first acrobatic circus company, Circus of Altrades, and Singapore’s first innovated recycled percussion group, Green Drumming – an indication of bringing together world-class sporting action and top-notch entertainment.

“We hope we have uplifted the local table tennis community and bringing enjoyment to all who attended the event – whether through being entertained by the high-quality table tennis action, or by learning a little more about the sport through our community engagement initiatives. We thank Sport Singapore for their support in delivering a world-class event. We are grateful to all players, officials, partners, event staff and volunteers for their hard work in ensuring the success of the Singapore Smash. Our work for Singapore Smash 2023 has already started. We will continue to work with the relevant authorities, stakeholders and local partners, and we look forward to staging a bigger and better event next year.”

Sport Singapore chief executive officer Lim Teck Yin said: “The Singapore Smash brought two weeks of world class table tennis action and thrilled players and fans alike. We look forward to working with WTT, ITTF and STTA to bring more exciting table tennis action and growing the sport here. Kudos to our Team Singapore paddlers who put up a good showing. I would also like to commend our Singapore officials for representing us well in this inaugural world class event.”