Staged on Saturday 26th and Sunday 27th February, Montreux is the home for the 2022 CCB Europe Top 16 Cup, the fourth time the Swiss city has played host, twice the number of any other destination.

A quite significant feat, especially when the most pertinent fact of all is considered. It will be the 50th time the celebrated tournament has been staged.

The event was first held in 1971 in Zadar, Croatia, in those days part of the country known as Yugoslavia; a total of 12 men and six women competed, Hungary enjoying success. Istvan Jonyer and Beatrix Kishazi emerged the respective winners.

Jonyer was to succeed again in 1974, Beatrix Kishazi on the next three occasions and again in 1977 to make the total four; to this day the only female players that can match the record are Li Xiao of the Netherlands and Luxembourg’s Ni Xialian.

Meanwhile, for the men, with seven wins apiece, Germany’s Timo Boll and Sweden’s Jan-Ove Waldner top the list but neither owns three in a row; the only male player with that distinction is Boll’s colleague, Dimitrij Ovtcharov (2015, 2016, 2017).

Familiar faces over the years at the tournament steeped in history but the most familiar of all is Vladimir Samsonov of Belarus; he competed no less than 23 times, owning a somewhat unwanted record. He won on four occasions but was the runner up on nine appearances, five more silver medals than his nearest silver medal rival Jan-Ove Waldner.

However, Nemes has another claim to fame; she is the only player to have represented three countries – Romania, Federal Germany, Germany. Also, she is the youngest ever winner. She prevailed in 1983 in Cleveland when only 14 years old.

An entry of 12 players in each discipline, all play all was the format until 1990, when the schedule changed to groups of six players; first and second advancing to the semi-finals. Later, in 2001, there was a further change, four groups in the first stage, first place advancing to the main draw; one year later that was amended to first and second positions progressing to the quarter-finals.

In 2015, the tournament numbers increased, thus the Europe Top 16 was born. Initially, play was in two stages, four groups in the first phase, first and second advancing to the quarter-finals where a progressive knock-out system determined the top eight places.

Later in 2018, the first occasion when the tournament was staged in Montreux, the group concept was abandoned, straight knock-out the formula, a system that exists to the present day.

Firmly established, held every year except in 2013, the tournament was one of the few that did not have to be cancelled or postponed owing to the pandemic; overall 25 men have been crowned champions, for the women it is 29 in number. 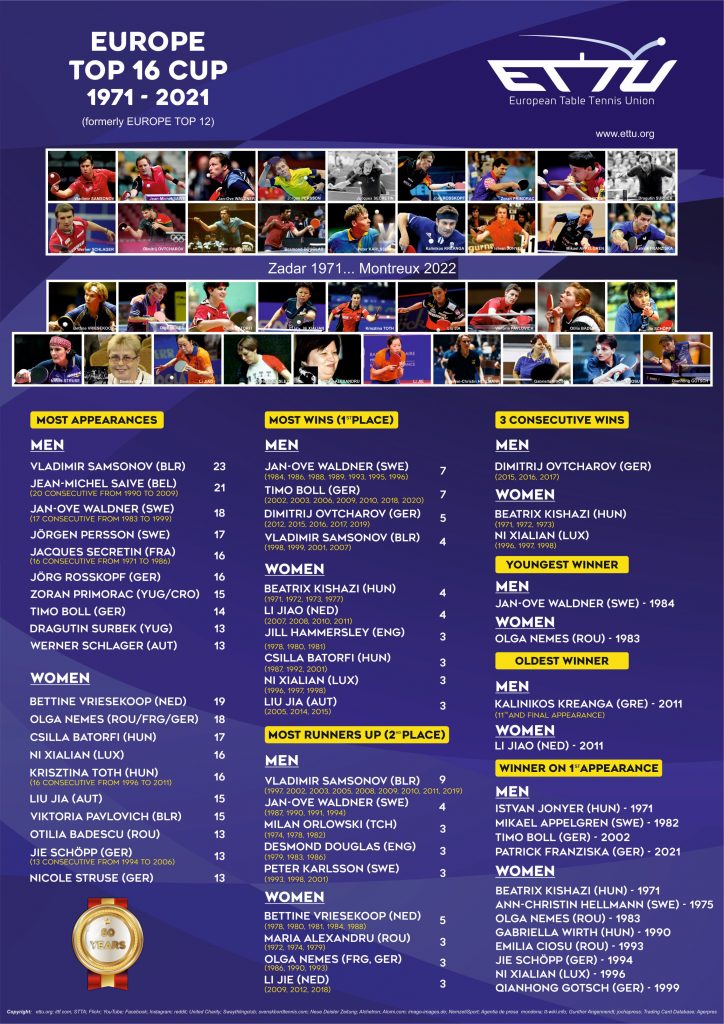 Created in 1931, Swiss Table Tennis will use the opportunity to celebrate its 90th anniversary with the table tennis family. The ITTF President Petra Sörling will attend the gala dinner “90 years Swiss Table Tennis” on the invitation of the Member Association.