Splendid premises in the Princess Sumaya Hall, located in Amman’s King Hussein Sports Centre, but that was not necessarily the most striking aspect as eight days of action concluded on Tuesday 14th December at the 2021 ITTF Hopes and Challenge.

The key factor was the splendid atmosphere, everybody whether players, coaches, or officials in unison, positive, well aware that a most valuable event had been staged.

Great credit must go to the Jordan Table Tennis Federation led by the President, Tarek Al Zouby. Earlier in the year at the 2021 Arab Championships staged at the Al-Ahliyya Amman University, new standards of presentation for the annual tournament had been set.

At the ITTF Hopes and Challenge, those standards were maintained. 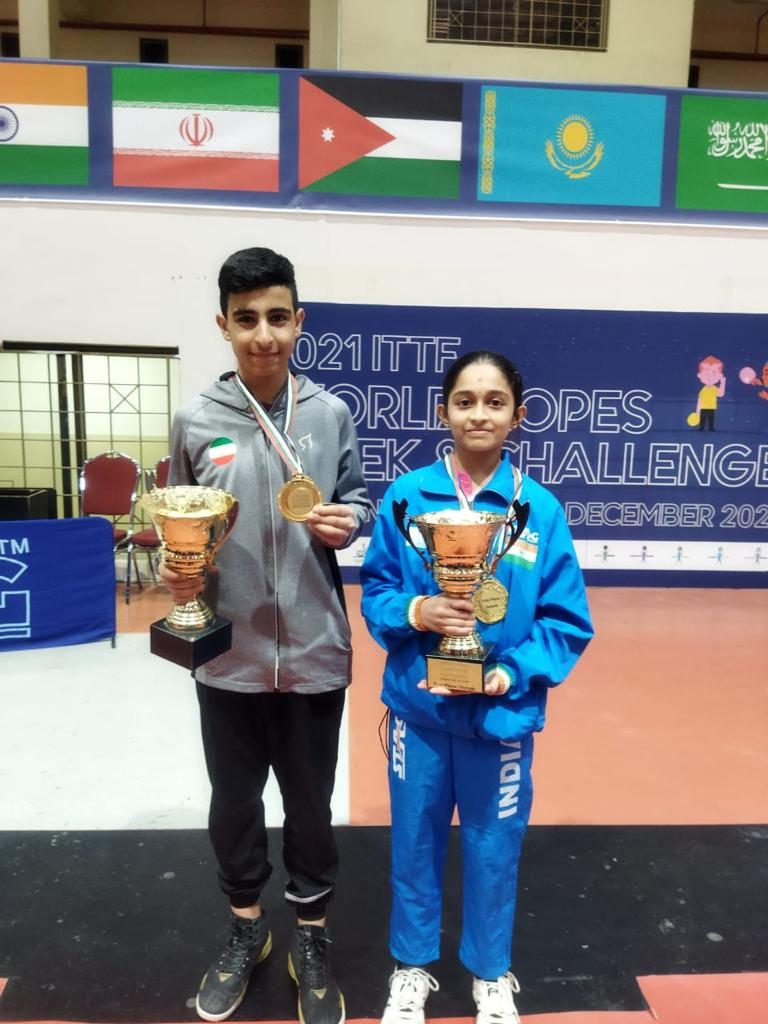 Quite simply those facts relate the value of the week; players from countries that have no great history of winning Olympic or World titles succeeded.

It was a fact that very much attracted the attention of Hungary’s Zoltan Batorfi, the head coach for the girls.

“The level is rising, there is a wider spread of talent, players from countries with no great tradition of success on the world scene are now producing players who can compete at a high level. Here, players and especially coaches have learnt from each other. They take home a good experience.” Zoltan Batorfi

A good experience, most certainly, one that no classroom can produce; young people making friends, overcoming language barriers; in fact, becoming aware that in the table tennis hall there are no such things as barriers.

Equally, despite the fact that masks were worn, a fist pump replaced a handshake and Covid-19 tests were conducted, the atmosphere was relaxed; you did not have keep a sword’s length from your colleague.

It was a step back to what one might determine normality, a fact Eva Jeler, the head coach for the boys, acknowledged.

“For most it’s the first time out of lockdown, people are socializing once again; it’s back to life. In recent times players and coaches have met in small groups, maybe just with father and mother helping. At the Hopes Week, we had the chance not only to help the players but to enable coaches to move to a higher level; in that way it is possible for more talented players to appear, not have a downturn after one such promising name has emerged.” Eva Jeler

Most certainly the young players responded, and all realized they had been afforded a special opportunity; one that had been made possible thanks to the excellent organisation and co-operation of all concerned.

Proceedings concluded with Princess Zeina Rashid, who represented Jordan in the table tennis events at both the Athens 2004 and Beijing 2008 Olympic Games, alongside Khali Al-Mohannadi, President of the Asian Table Tennis Union and Executive Vice President of the International Table Tennis Federation, presenting the awards.

The ITTF Hopes Week and Challenge brought the old year to an end, now we look forward to the new, the message from Amman: challenges ahead but a year full of hope.

The coaching team will now select those players chosen for the Hopes Squad, which will offer a qualification pathway for the 2022 ITTF Hopes Team, by evaluating certain criteria witnessed in the participating players throughout training and competition. Komeil Niknejad Divshali and Hansini Mathan Rajan as winners of the Wold Hopes Challenge receive automatic placement in the Hopes Squad.