Chinese Taipei takes its place in the Women’s Team quarter-finals following a convincing 3-0 win over United States. Seeded fifth, Chinese Taipei came close to defeat in the opening doubles match as Cheng Hsien-Tzu and Chen Szu-Yu recovered from 1-2 down to beat Lily Zhang and Liu Juan 3-2. Cheng I-Ching put clear water between the two teams with her 3-0 victory over Wang Huijing, and an inspired Chen also delivered success as she came out on top 3-1 against Liu.

“Obviously, it’s disappointing that we lost this match. I think we had some really good chances, especially in the doubles, which was quite important to come out of with a lead. We had match point, so it was heartbreaking that we lost that one. As a team, we really supported each other, and I’m proud that we gave everything that we had,” said Zhang 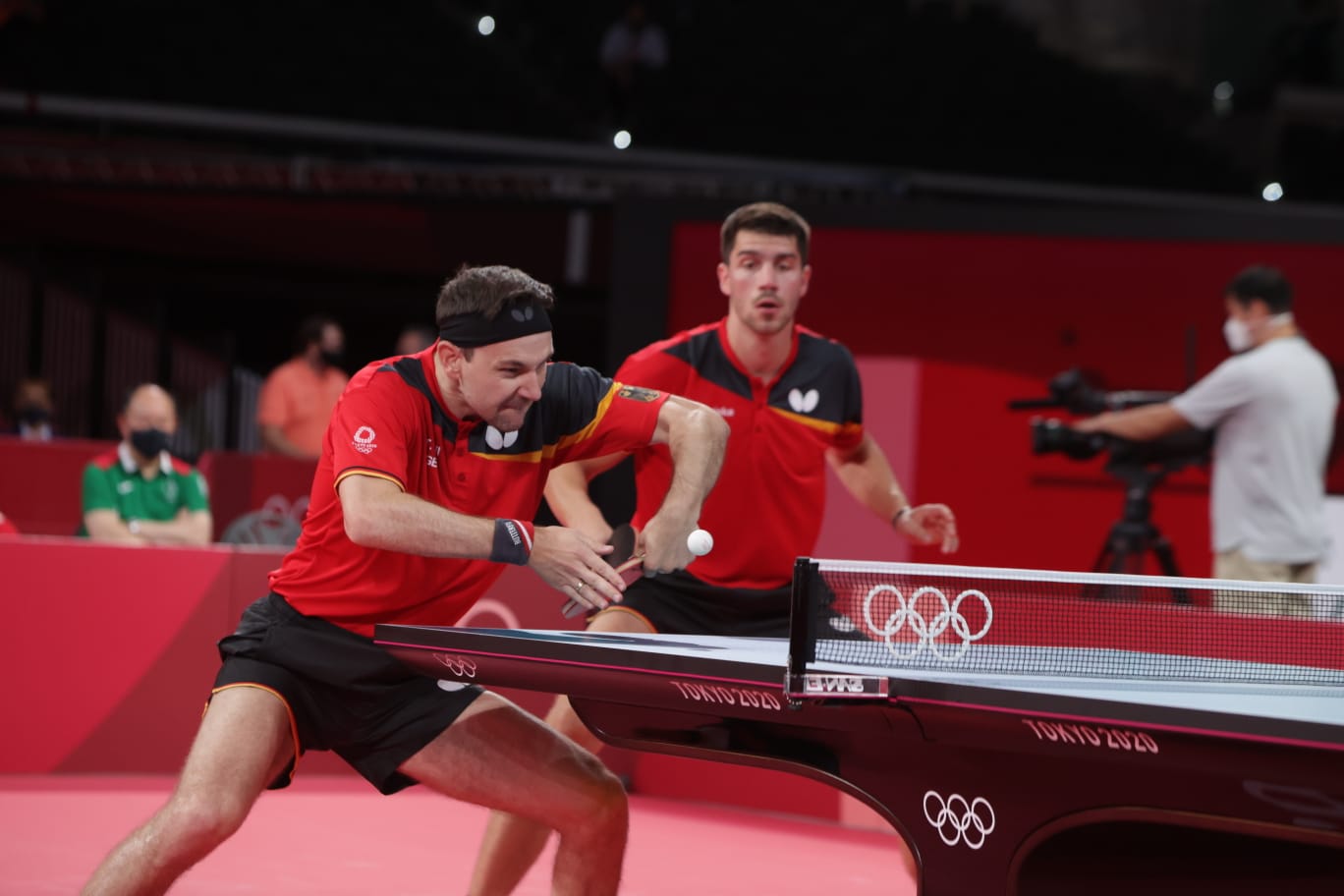 Meeting a dangerous opponent in Portugal, Rio 2016 bronze medallists Germany performed well in the face of pressure to make the Men’s Team quarter-final draw. Fighting back from 2-10 down in the opening game of the doubles, Patrick Franziska and Timo Boll combined to perfection as they took down Tiago Apolonia and Joao Monteiro in straight games. Dimitrij Ovtcharov produced another exceptional effort at the table, beating Marcos Freitas with little difficulty before Boll finished the job against Apolonia with Germany’s third 3-0 win of the match. 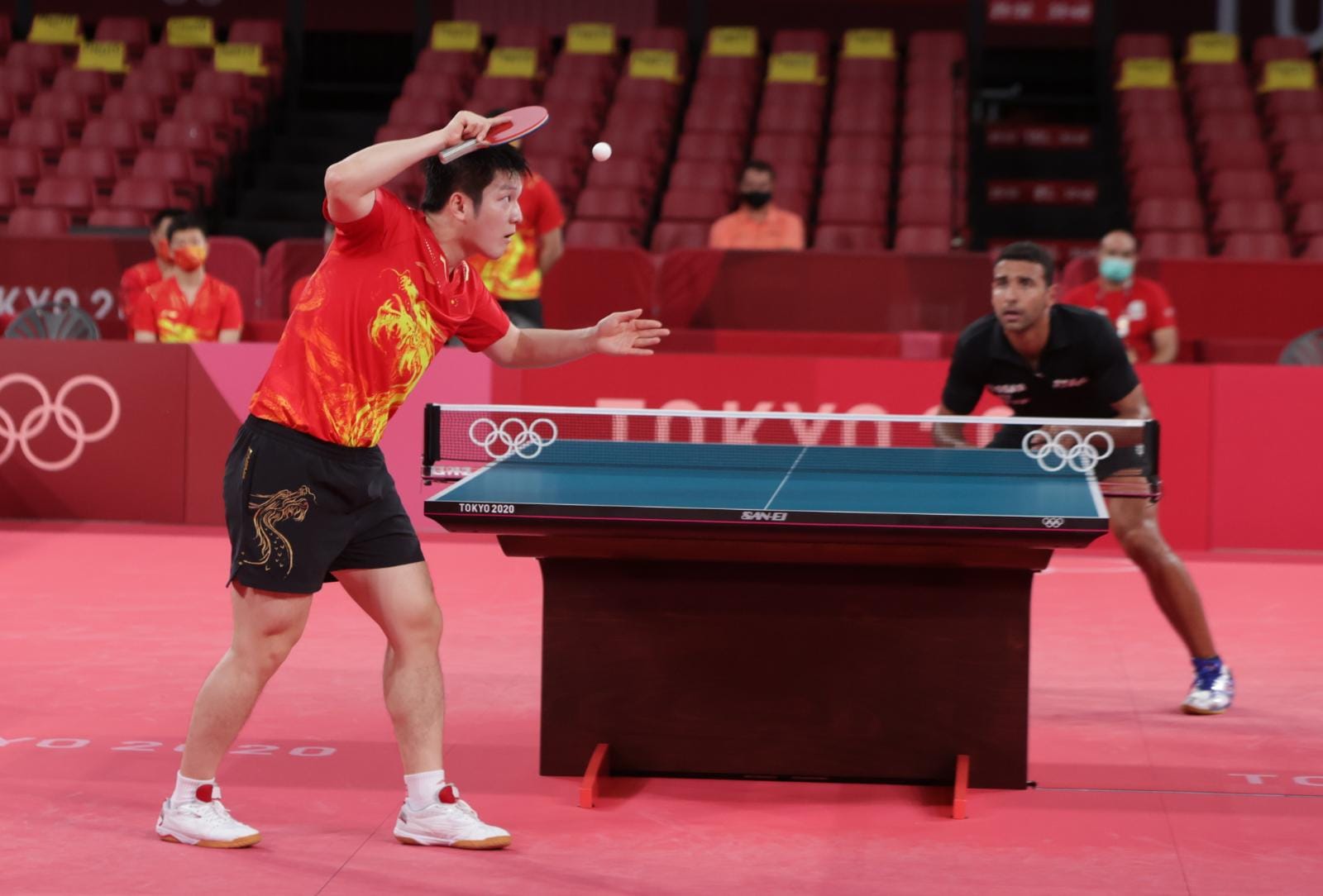 China off to perfect start

Team China couldn’t have asked for a better start to the Men’s Team event after completing a 3-0 win against Africa’s sole representative in Egypt. Ma Long and Xu Xin combined to deadly effect in opposition to Ahmed Saleh and Khalid Assar, before Fan Zhendong accounted for Omar Assar in the first singles encounter of the match. Khalid Assar displayed great courage but was simply outclassed by Xu Xin in the third fixture to send China through without dropping a game. 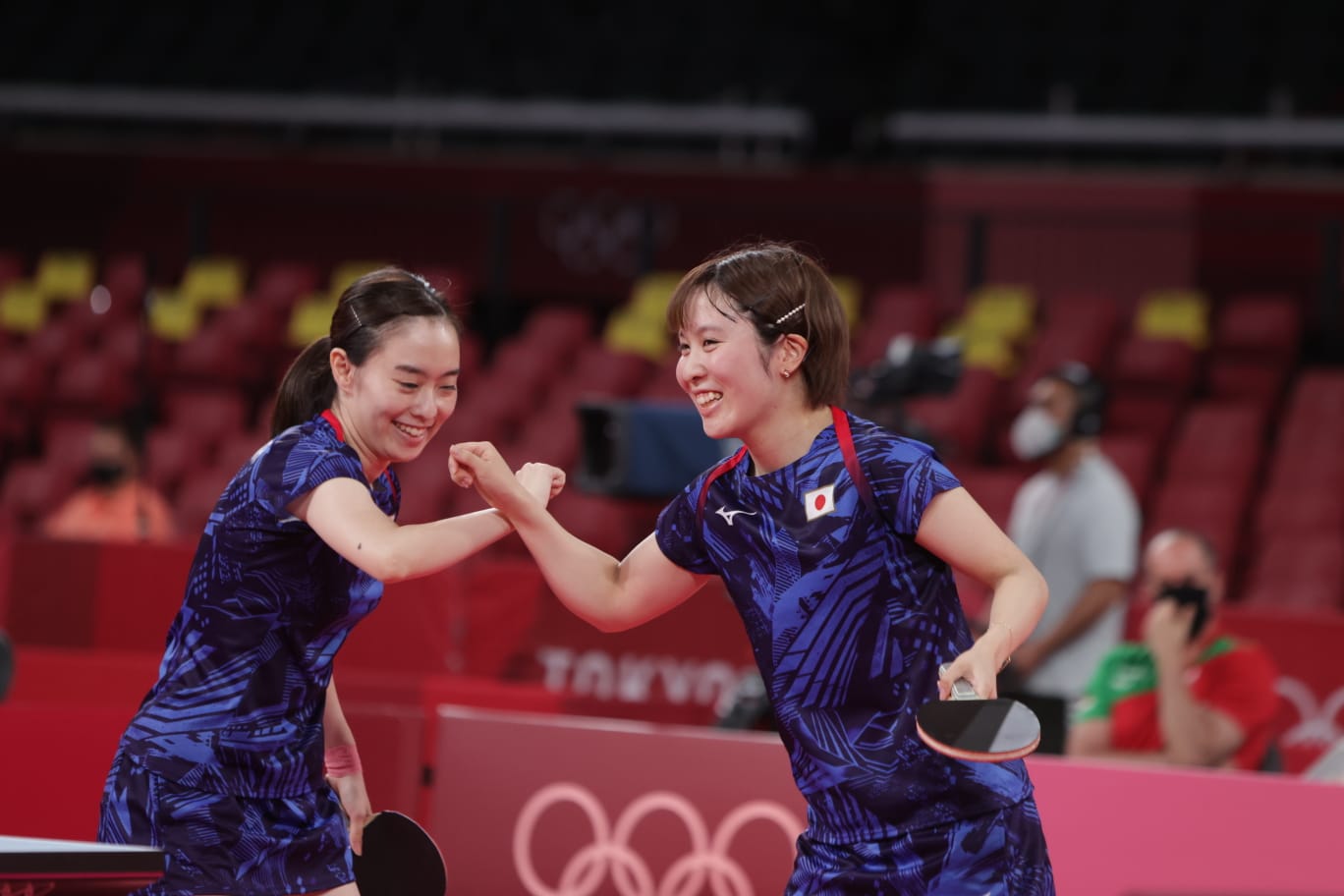 There was no stopping hosts Japan in the opening round of the Women’s Team competition, with the number two seeds cruising to a 3-0 victory over Hungary. A straight games win for Japan’s Kasumi Ishikawa and Miu Hirano over Maria Fazekas and Szandra Pergel put the European side on the back foot, and they ultimately couldn’t recover. Mima Ito needed less than 20 minutes to overcome Dora Madarasz 3-0 in the second fixture, while Hirano posted the same margin of victory over Pergel to put the result beyond any doubt.

“Today we played very well, and we won 3-0, which was great. The doubles was especially nice, and we won each individual match as well, so this is good momentum for us, and we want to carry this on to the next match,” said Ishikawa 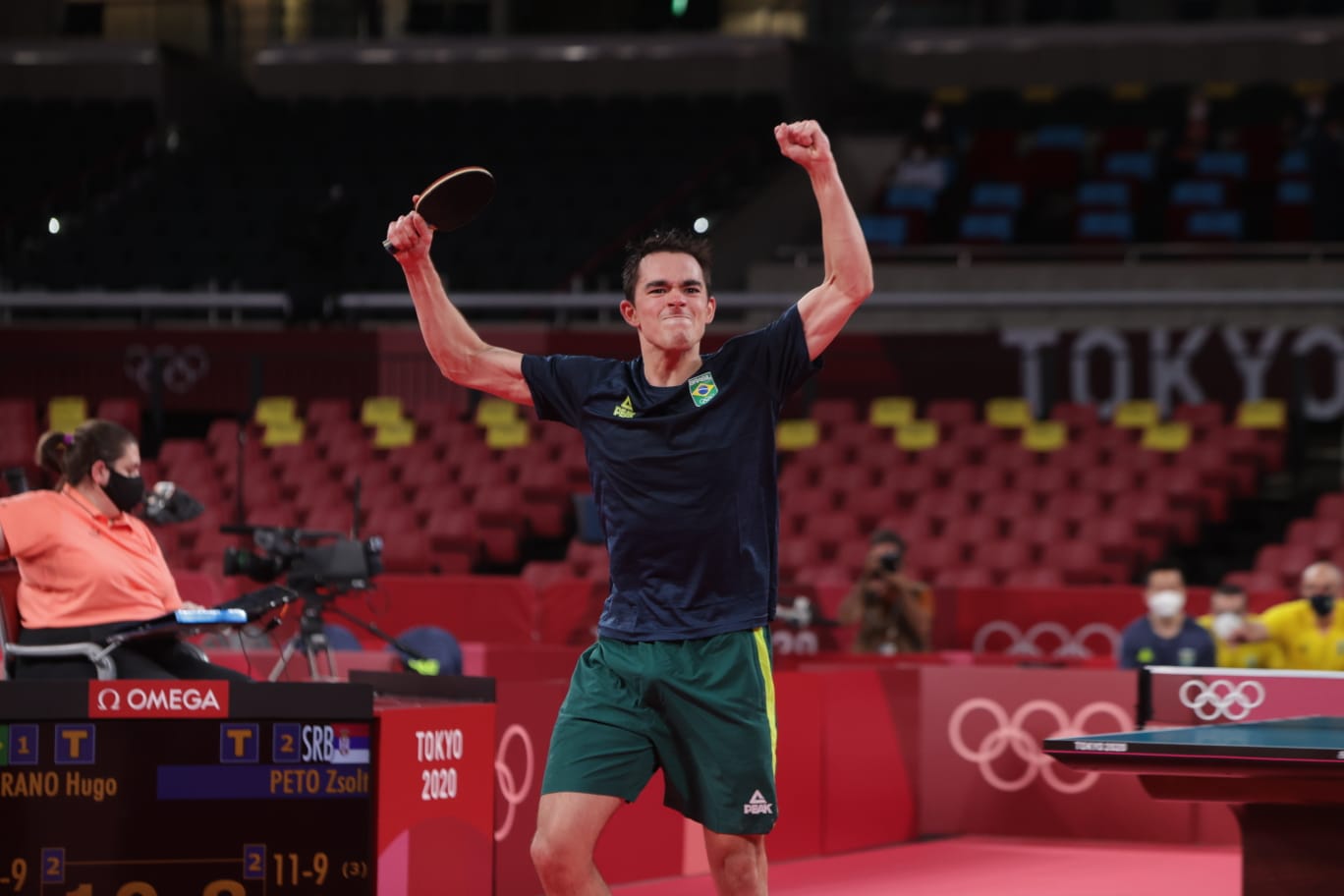 Brazil fights back to squeeze through

Brazil, seeded sixth, live to fight another day in the Men’s Team event following a tense full-distance round of 16 affair with Serbia. Zsolt Peto and Marko Jevtovic handed the European side the best possible start with a 3-1 win over Vitor Ishiy and Gustavo Tsuboi in the doubles. Hugo Calderano levelled the scores soon after, narrowly seeing off Dimitrije Levajac 3-2, only for Jevtovic to put Serbia in front once again following his stunning 3-2 victory over Tsuboi. No more margin for error; Brazil had to win the two remaining fixtures. Up stepped Calderano to beat Peto 3-2, before Ishiy’s 3-0 success against Levajac secured the team’s place in the quarter-finals.

“It was a very hard match against Serbia, especially very tough for Gustavo and me after coming back from the singles event. Personally, it was very hard to play at my best level. I was still tired from the singles, but I did my best, and I think mentally I was okay even if I wasn’t physically fit. I’m very proud of how the team fought. Vitor was amazing in the last match, so I’m very proud of him too,” said Calderano 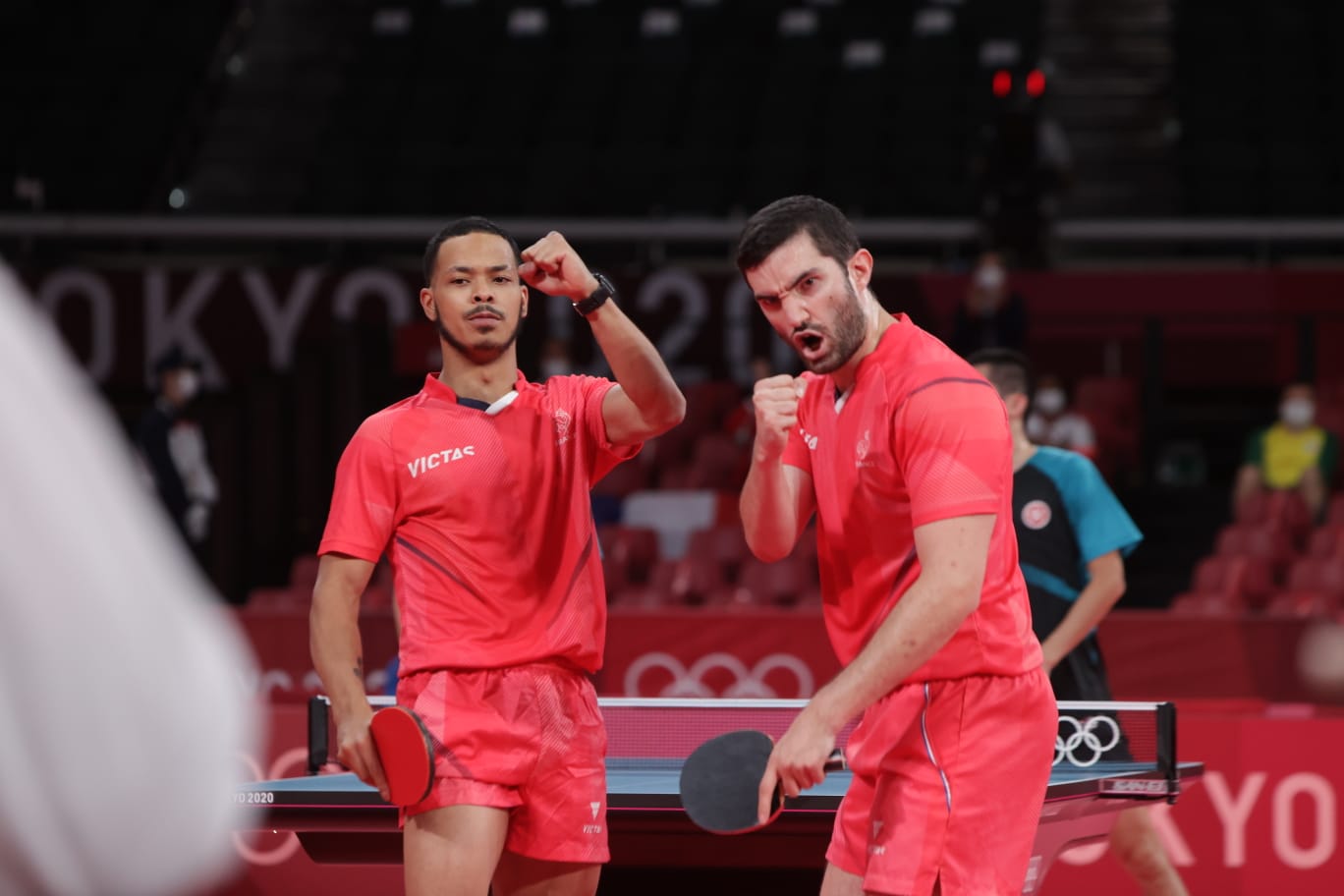 Hong Kong, China could not find an answer to counter France’s aggression as they fell 3-0 in their round of 16 Men’s Teams clash. Emmanuel Lebesson and Alexandre Cassin fired the opening salvo as they won the first match 3-0 against Lam Siu Hang and Ho Kwan Kit before Simon Gauzy continued France’s dominance by taking the second match 3-1 against Wong Chun Ting. Any hope of a comeback by Hong Kong, China in the third match was dashed as Lebesson came out strongly against Ho again by beating him 3-0.

“I had never beaten Wong Chun Ting before in my career. I watched many videos of him over the past few days and knew I would face him today because we are both number one in our countries, so I was ready to face him and tried to disturb his rhythm. Today was tough, I was 6-1 down in the third game but managed to come back, and I’m just really happy for the team,” said Gauzy

Germany proved too strong for Australia as they clinched a decisive 3-0 win to progress to the quarter-final of the Women’s Team event. Reigning European women’s doubles champions Shan Xiaona and Petrissa Solja showed their formidable partnership, securing Germany’s first point with a 3-0 win over Melissa Tapper and Michelle Bromley in 15 minutes. Han Ying then clinched a morale-boosting 3-2 win over Lay Jian Fang before Shan ensured Germany’s advancement by dispatching Bromley 3-0 in their singles encounter. 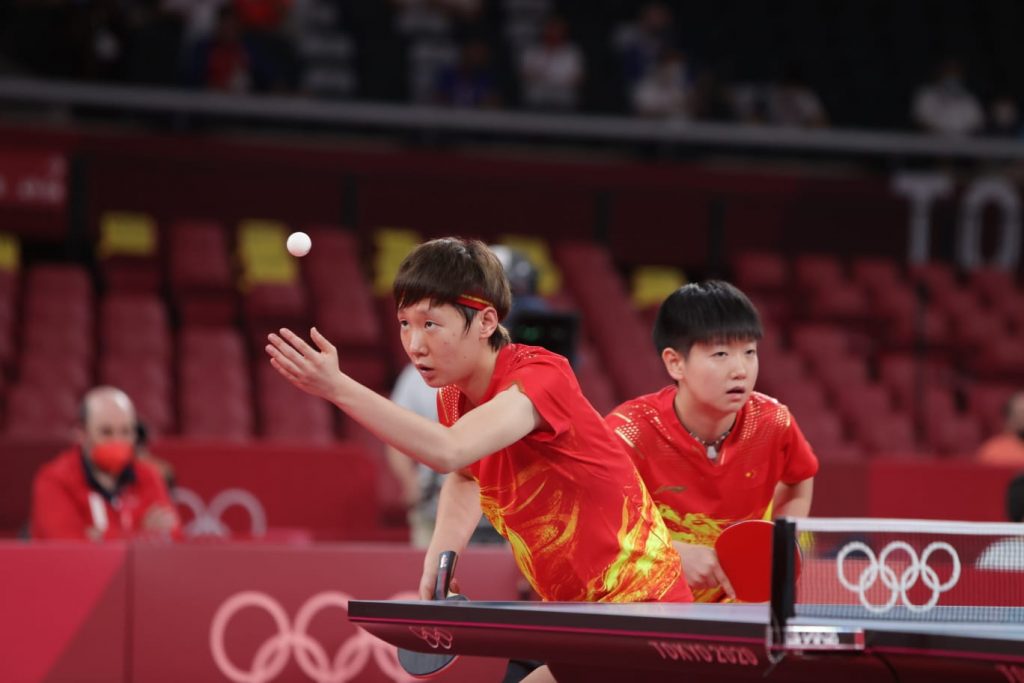 China started their defence of their Women’s Team well by beating Austria comprehensively 3-0. Sun Yingsha, together with Wang Manyu kickstarted their campaign with a 3-0 straight games victory over Liu Jia and Liu Yuan. Women’s Singles gold medallist Chen Meng then clinched the second match with another 3-0 victory over Sofia Polcanova to extend China’s advantage. Wang, who replaced the injured Liu Shiwen for the Women’s Team event, made her immediate impact with another 3-0 win over Liu Yuan in their singles match that was over in 16 minutes. 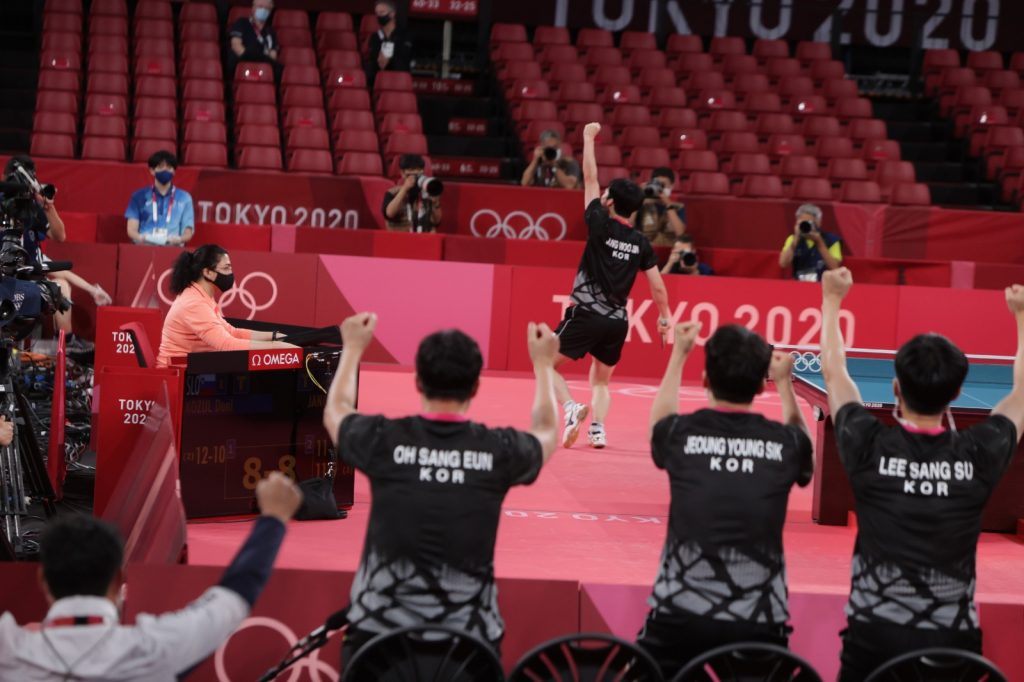 The Republic of Korea, who are seeded fourth in the Men’s Team, underlined their credentials with a 3-1 victory over Slovenia as they kickstarted their campaign in the table tennis Men’s Team event. Lee Sangsu and Jeoung Youngsik won their opening match 3-0 convincingly against the Slovenian pair of Deni Kozul and Bojan Tokic. Jang Woojin was pushed to the distance by Darko Jorgic but managed to close out the fifth game 11-5 to give the Republic of Korea a 2-0 lead. Tokic gave Slovenia a brief reprieve as he won the third match 3-1 against Jeoung, but it was the Koreans who will advance to the quarter-final after Jang dispatched Kozul 3-1 in the fourth match.

“The first game was really important for us. We prepared ourselves and we did well. This is not over yet and we’ll continue to do our best and take each match as they come,” said  Jeoung. 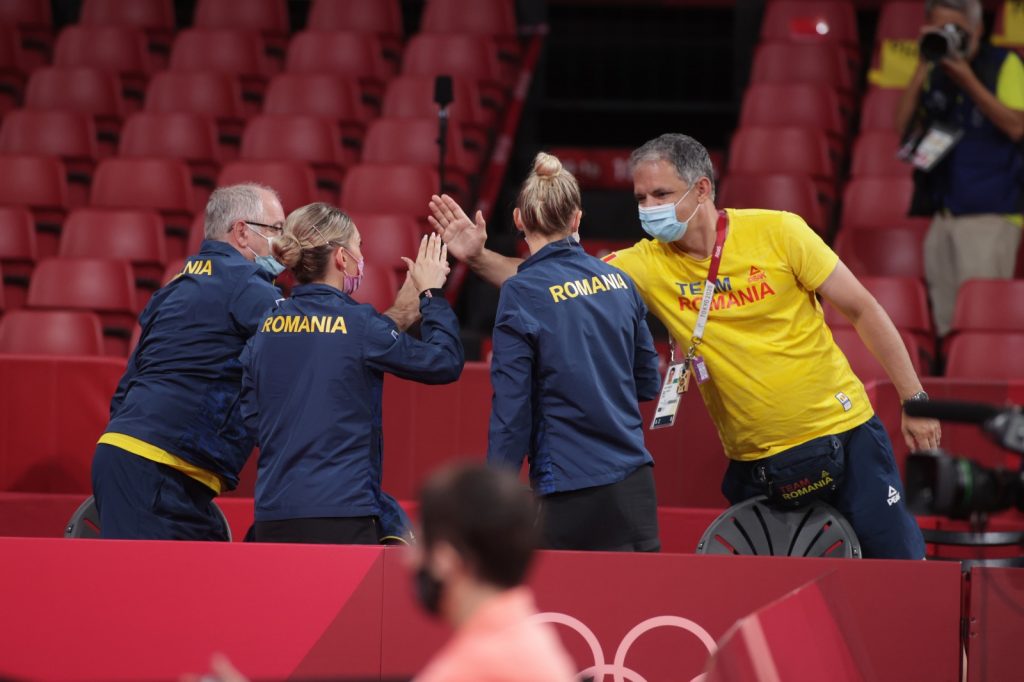 Romania off to a winning start

Romania started their medal quest for the Women’s Team event by beating Egypt 3-0, where a stiffer test against Hong Kong, China awaits in the quarter-final. Daniela Dodean and Elizabeta Samara secured the early points for Romania when they beat Yousra Helmy and Farah Abdelaziz 3-0 in the first doubles match. Bernadette Szocs then took down Dina Meshref in a five-game thriller that Szocs eventually triumphed 3-2. Samara returned to action in the next singles match where she outplayed Abdelaziz again, winning 3-1.

“We trust each other and we are a good team. If one of us is not in good shape, the other partner will makeup and we will always try to win every match,” said Szocs. 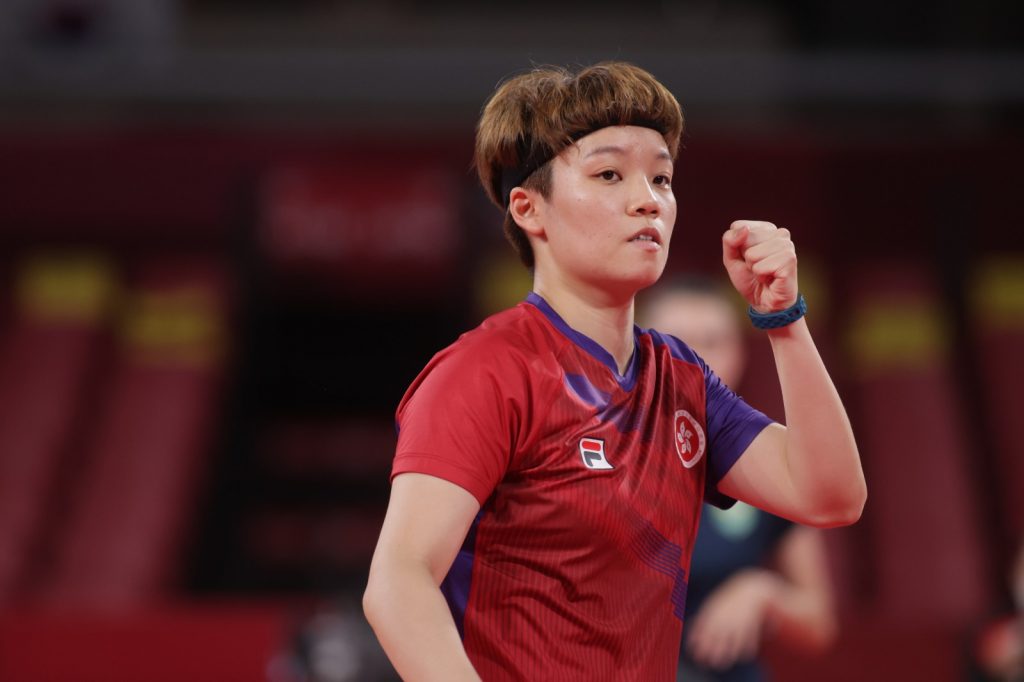 Brazil made an early exit in the Women’s Team event after losing 3-1 to Hong Kong, China. Soo Wai Yam Minnie and Lee Ho Ching proved too strong for Jessica Yamada and Caroline Kumahara as they seized the early initiative 3-0 in 27 minutes. Doo Hoi Kem continued to give Hong Kong, China the advantage with a 3-0 victory over Bruna Takahashi before Kumahara reduced the deficit for Brazil with a 3-2 win over Lee. Doo then returned to action in the fourth match to defeat Yamada 3-1, sealing Hong Kong, China’s passage to the quarter-final where they will meet Romania. 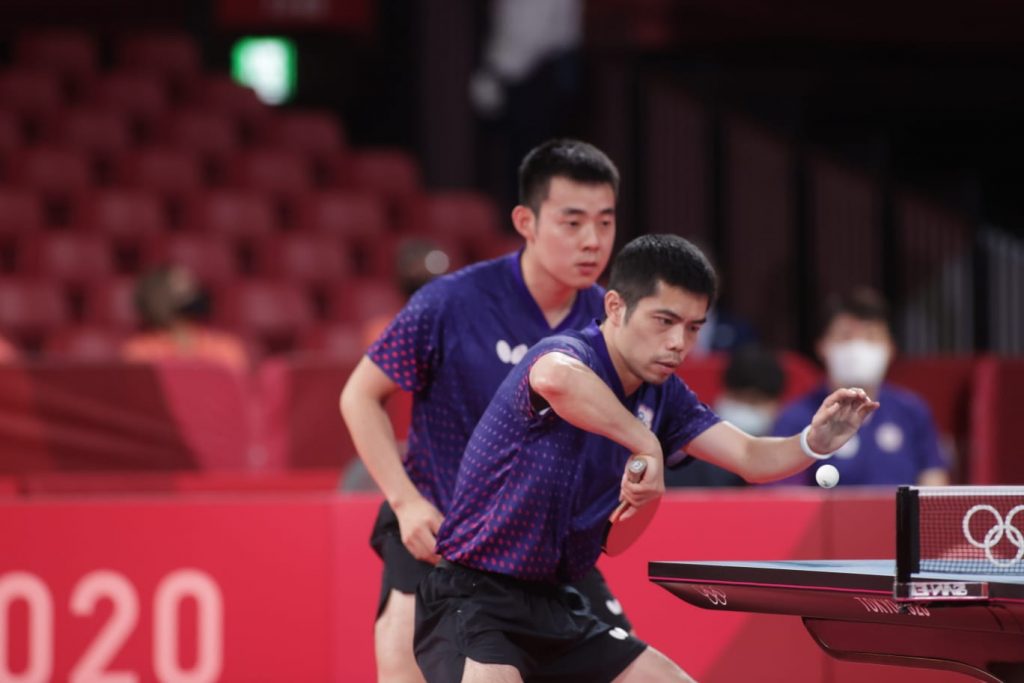 Seventh-seed Chinese Taipei steamrolled past Croatia 3-0 in their opening Men’s Team event. Croatia, who are seeded three places below them, put up a gallant fight in their opening match, but Tomislav Frane and Andrej Gacina still went down 3-2 to Chen Chien-An and Chuang Chih-Yuan. Mixed Doubles gold medallist Lin Yun-Ju then made light work of Tomislav Pucar as he comfortably won their match 3-0 in 21 minutes. Chuang ensured Chinese Tapei’s progress to the quarter-final when he dispatched Gacina with a similar 3-0 scoreline in the third match.