Ovtchaorv fights back to extend his stay

Seventh seed Dimitrij Ovtcharov, Germany, has survived a gruelling six-game contest against Brazil’s Hugo Calderano, seeded fourth. A despondent Ovtcharov was forced to come back from two games down before overturning a six-point deficit in game five to take the lead for the first time. Calderano kept up the fight, but the momentum was overwhelmingly with Ovtcharov, who powered over the finish line to qualify for the semi-finals (7-11, 5-11, 11-8, 11-7, 11-8, 11-2).

“Well, he played extremely strong in the first two games, hitting every ball and missing nothing. He put a lot of pressure on me, and I couldn’t find my game, but I just told myself to stay in it and wait for my chance which eventually came. I could tell he really wanted to close out the third game, and I started to spot the pressure on him, using it to my advantage. Suddenly, something shifted in the game and I was on top. I’m feeling tired after this match, but I’m excited for tomorrow, so I’ll rest, sleep and give my all tomorrow,” said Ovtcharov 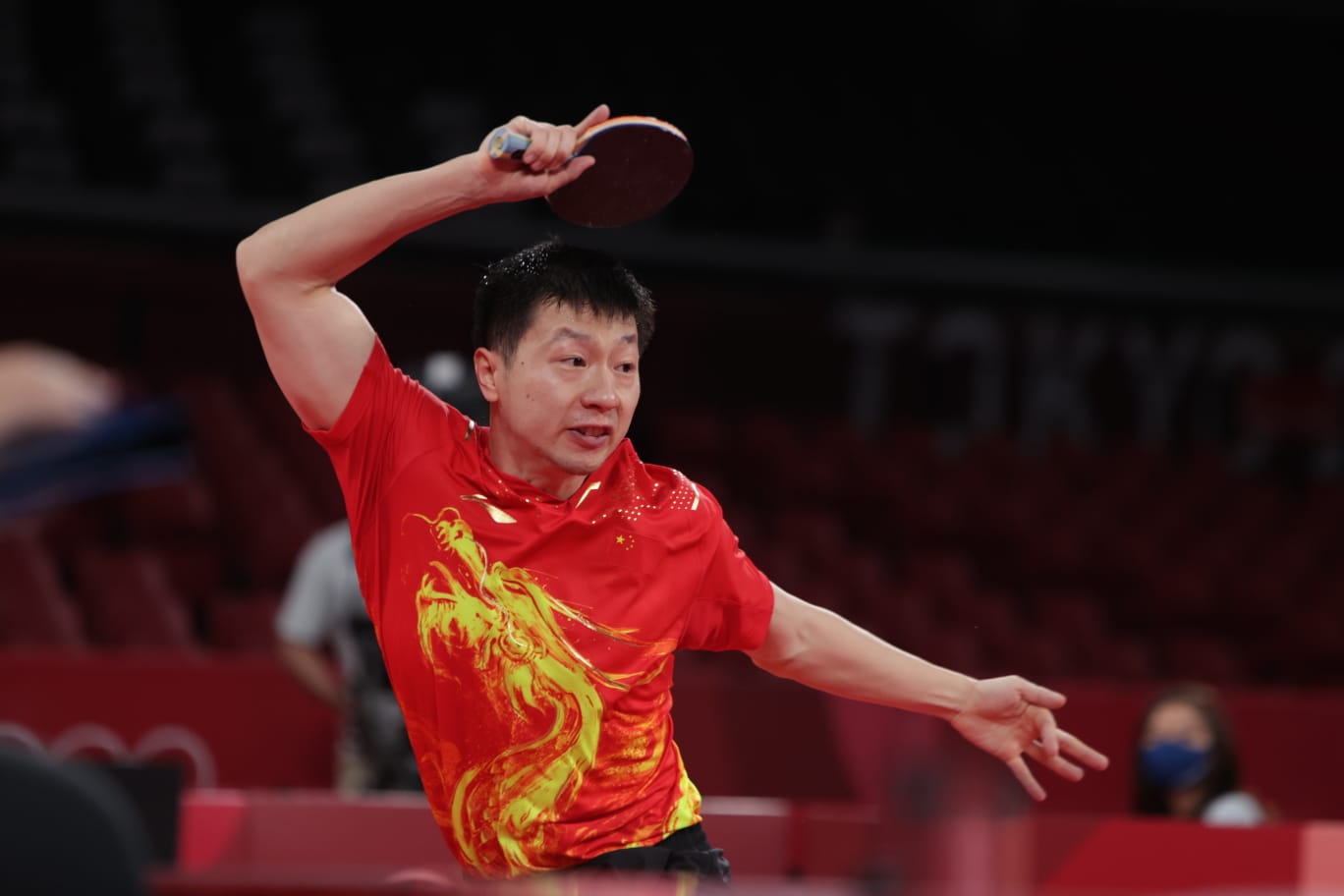 Ma powers through to the semi-finals

Defending Olympic champion Ma Long, China, laid down his marker in the penultimate Men’s Singles quarter-final, posting a commanding victory over Egypt’s Omar Assar. Both players produced fantastic attacking table tennis with Assar offering up another compelling display, but it was enough to stop second seed Ma, who sails through to the next round (11-7, 11-9, 11-6, 11-13, 11-6).

“He’s always improving and one of the best players from Africa. You can tell from his results so far that he is a very solid player. In my last two encounters with him, I’ve beaten him 4-1, but it’s a new game each time we meet and I have to be mentally strong all the time. Looking ahead to the rest of the competition, I hope to get better and better, to fight for every point and win every game,” said Ma Long 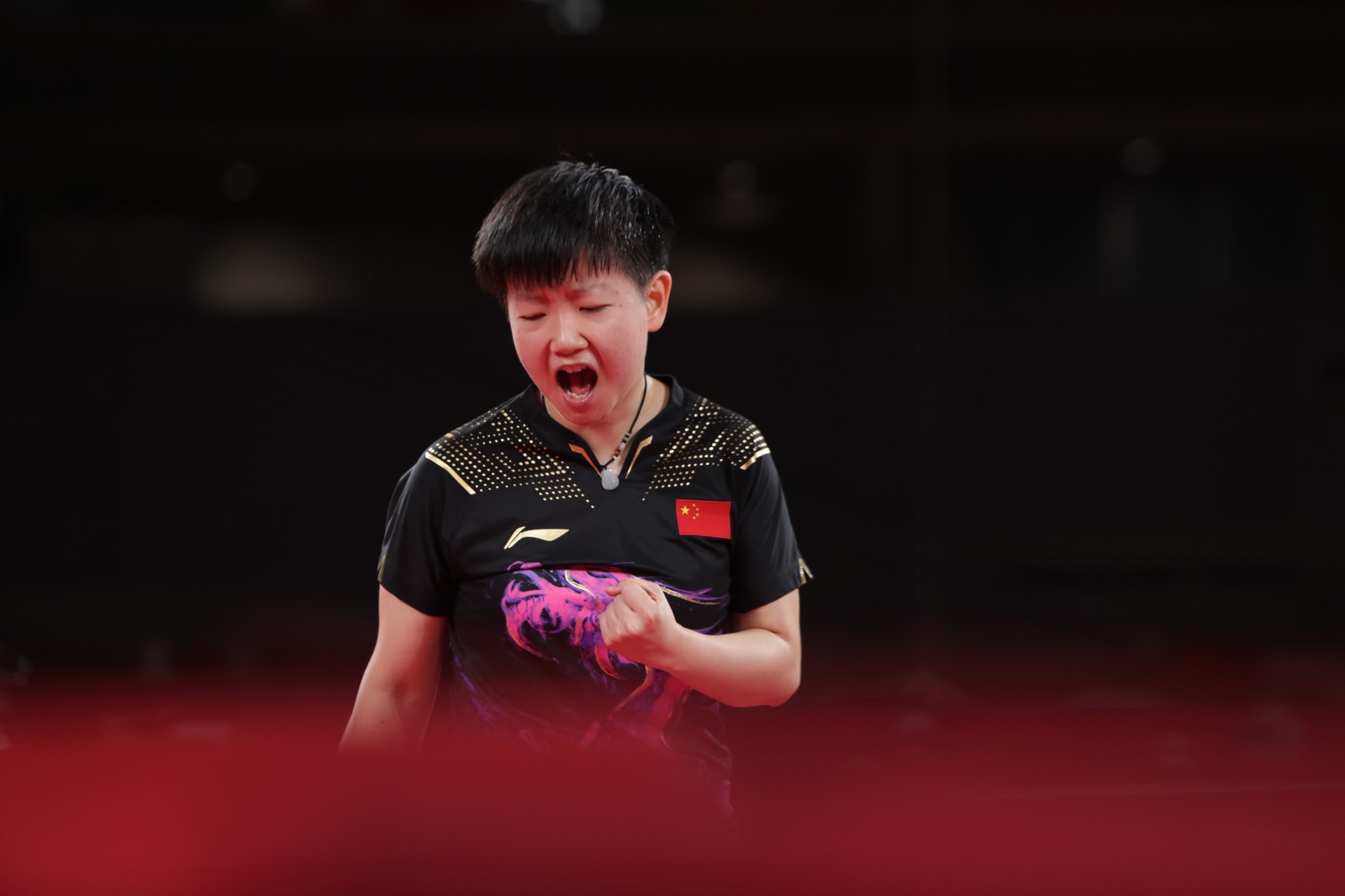 Brave effort but Han’s journey comes to a halt

It’s the end of the line for Han Ying, with the number 12 seed from Germany tasting defeat at the Women’s Singles quarter-final hurdle. Facing an uphill battle from the start, Han tried every trick in the book, but second-seeded opponent Sun Yingsha, China, was ready for whatever came her way. Sun needed just four of the seven games on offer to complete the victory (11-8, 11-3, 11-8, 11-6) to set up an epic semi-final clash with the host nation’s Mima Ito.

“This is probably first time I’ve gone head-to-head with Han Ying. It was a tough match although the 4-0 score might not really reflect that. She was playing very aggressively and I told myself to focus and just fight for every point. I’ve played against Mima Ito on many several occasions but this is the first time we are facing off at the Olympics and it’s important to stay calm and do my best,” said Sun 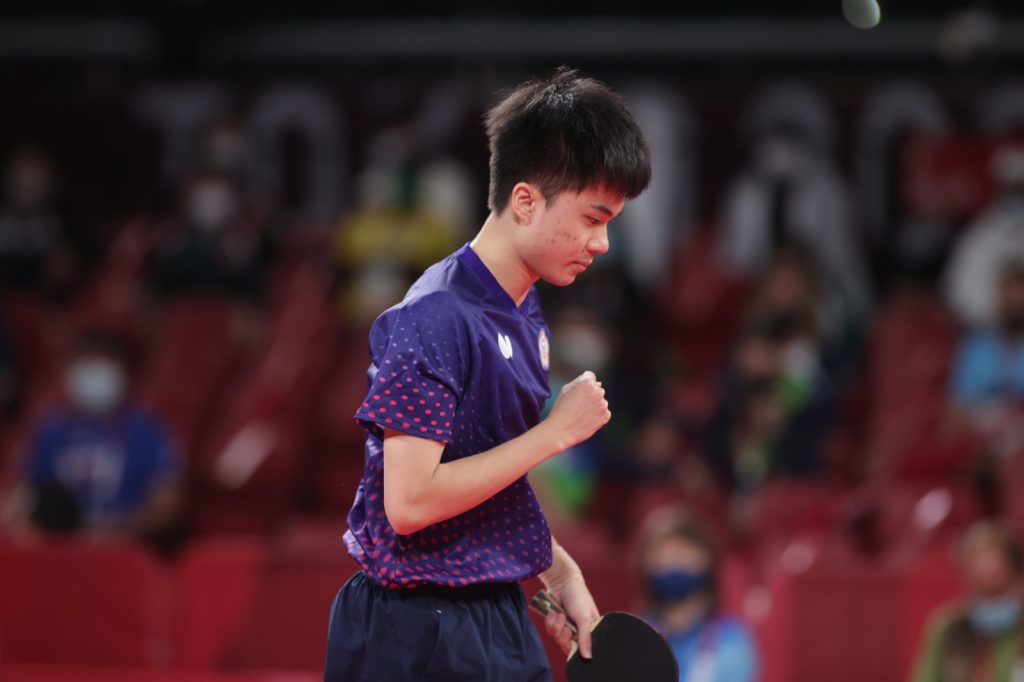 Chinese Taipei’s Lin Yun Ju needed only 25 minutes to dispatch Slovenia’s Darko Jorgic 4-0 (11-4, 11-7, 11-4, 11-6) to book his place in the Men’s Singles semi-final. Jorgic, who created one of the biggest upsets when he stunned hot favourite Tomokazu Harimoto in the round of 16 last night, could not produce another giant slaying performance as the 19-year-old teenager simply proved to be in a class of his own. Lin had earlier won the Mixed Doubles bronze medal with compatriot Cheng I-Ching. He took the early initiative quickly by winning the first game in five minutes before seizing control of the second and third game where he was always in the lead. Jorgic staged a brief comeback by winning the first two points in the fourth game, but Lin reduced the deficit to 2-2 immediately and never looked back as he stormed to a 11-6 victory in the final game.

“I played against Darko five years ago and lost 4-3 to him then. He’s a very good player but I did not give him many chances today as I prepared myself well. He’s probably also too tired after yesterday’s match. I tried not to think too much about the outcome of the match. Instead, I played without any expectations as I didn’t want to put too much pressure on myself,” said Lin. 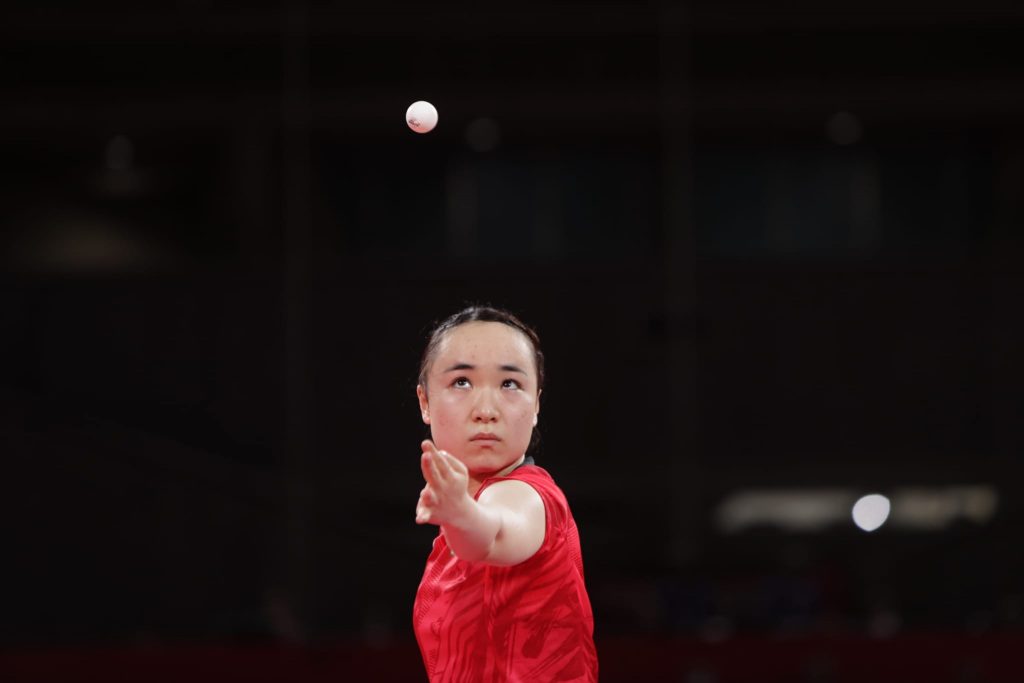 Jihee Jeon from the Republic of Korea fell in straight games 4-0 (11-5, 11-1, 12-10, 11-6) to Mima Ito as the Japanese continues her amazing run at the Tokyo 2020 Olympic Games. After winning the historic table tennis gold medal for Japan in the Mixed Doubles event on Monday evening, Ito extended her swashbuckling form to the Women’s Singles event, where she took down Portugal’s Yu Fan in the third round, followed by Thailand’s Suthasini Sawettabut in the round of 16. Ito won all four of her previous meetings with Jeon and proved too strong for Jeon again as she won their quarter-final clash in 36 minutes.

“I got off to a very good start and I was very focused throughout the match. Jeon is a very powerful player, but I just told myself to play my own game. And that’s what I did today,” said Ito. 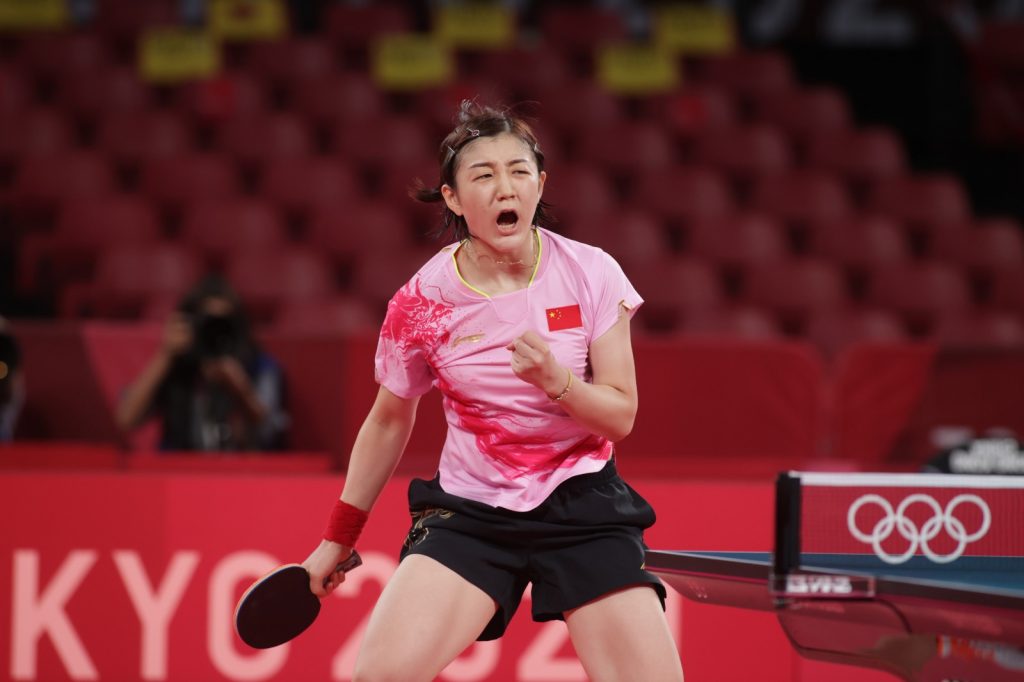 China’s Chen Meng fought back from two games down to defeat Doo Hoi Kem from Hong Kong, China 4-2 (6-11, 6-11, 11-6, 11-9, 1-1, 11-8), setting up a semi-final clash with Singapore’s Yu Mengyu. It was a tussle between the first and eighth seed in the quarter-final where Doo started strongly by winning the first two games against her higher-ranked opponent. But Chen staged her comeback by taking the third game 11-6 and continued to assert herself in the fourth game before steamrolling past Doo 11-1 in just seven minutes in the fifth game. She then closed out the match 11-8 to dash Doo’s medal’s hopes.

“Anything can happen at the Olympics and I was more focused on winning every point. I was feeling quite nervous as this is after all the Olympics where everyone wants to do their best. I felt more assured after winning the third followed by the fourth game. Looking ahead to semi-final, I want to go all out and win those first few points quickly to settle the nerves and slowly battle for each point again like what I’ve been doing all the time,” said Chen. 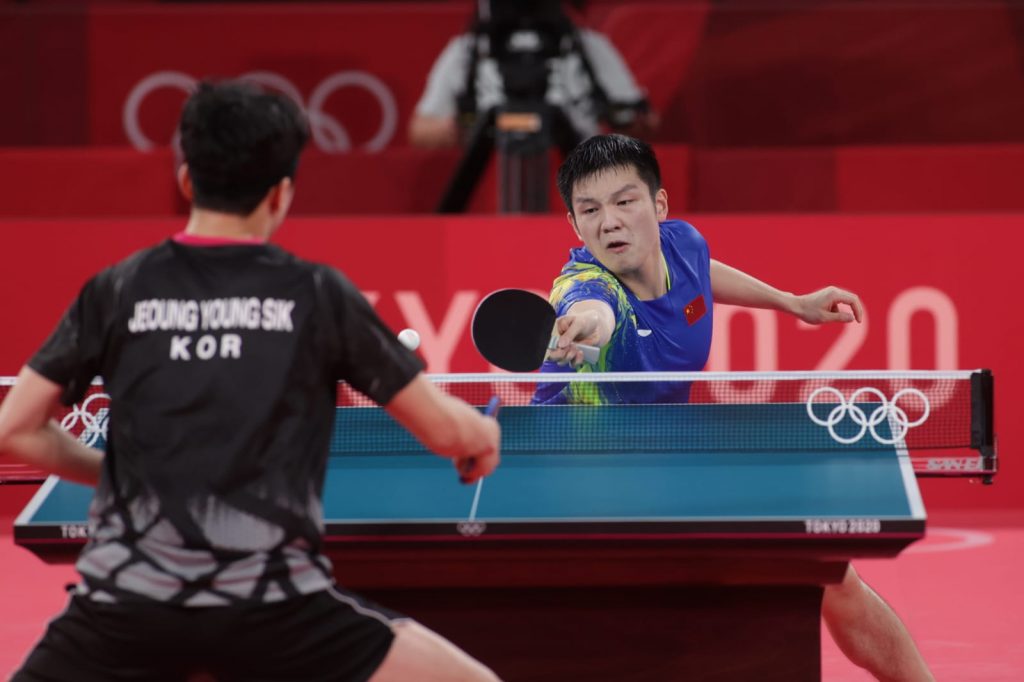 Republic of Korea’s Jeoung Youngsik’s brave run at the Tokyo 2020 Olympic Games came to an end after he lost 4-0 (12-10, 11-9, 11-6, 11-5) to world number one Fan Zhendong of China in the Men’s Singles Final. Jeoung had earlier dispatched Greece’s Panagiotis Gionis and Germany’s Timo Boll in the third round and round of 16 respectively. Fan showed why he is the world’s best men’s table tennis player after wrapping up the match in straight games at the Tokyo Metropolitan Gymnasium. The Chinese enjoyed a 9-10 head-to-head record against Jeoung going into the game and extended that record with another dominant performance. Fan was hardly troubled as the greatest deficit he had to overcome was two points throughout their 44 minutes clash.

“It was a good match and I played well. This is the Olympics after all and there will definitely be some form of pressure to deliver the good results. I have been coping well with the pressure so far and hopefully I can continue doing that,” said Fan. 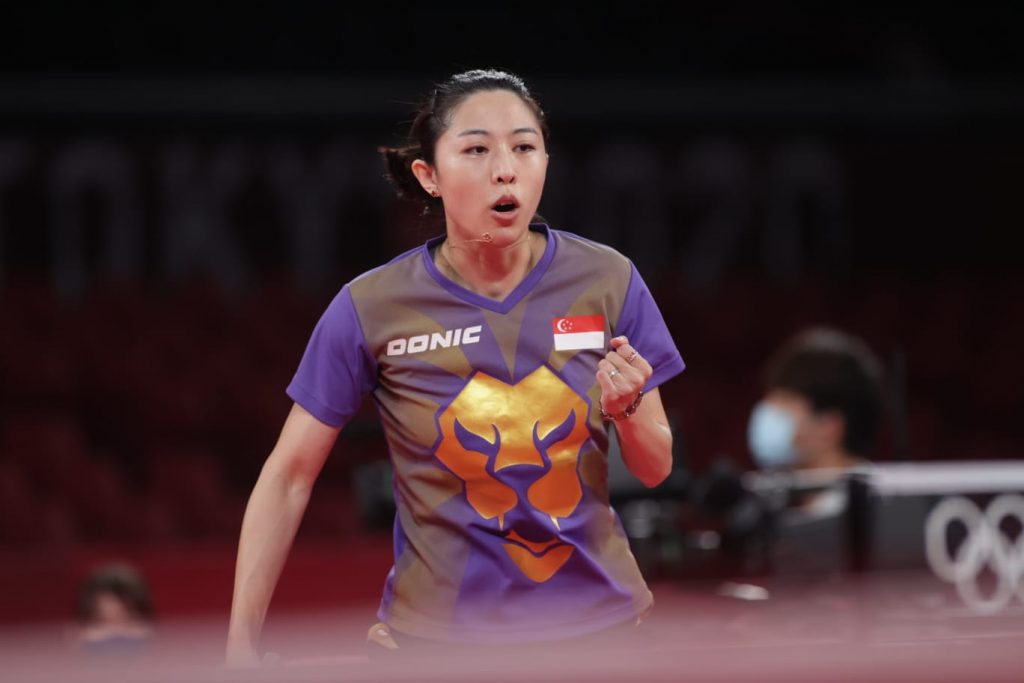 Singapore’s Yu Mengyu took down another home favourite Kasumi Ishikawa of Japan 4-1 (8-11, 11-5, 14-12, 11-6, 11-1) to book her place in the Women’s Singles semi-final. Yu had earlier beaten Mixed Doubles bronze medallist and world number eight Cheng I-Ching of Chinese Taipei in the third round. She followed up that victory with another win over American Liu Juan last night to set up a quarter-final meeting with Ishikawa, who had won eight of their previous 15 encounters. Yu, ranked 47th in the world, showed she was up to the task against the world number 10 Japanese. For the first time in her Tokyo 2020 Olympics Games campaign, Yu lost her opening game. But she fought back gallantly, beginning with a 11-5 win in the second game followed by a battling performance where she overturned a 8-10 deficit to win the third game for a 2-1 lead then. Yu extended her advantage over Ishikawa by taking the fourth game 11-6 before sealing victory with a 11-2 win in the final game to become the first Singaporean to reach the semi-finals of an Olympic Games table tennis Singles event since Feng Tianwei in 2012.

“The turning point in the match came in the third game. After winning that game, I became more confident after that. I’m extremely happy because this is my best result in the Olympics. Trailing 10-8, I managed to save some match points and that gave me the confidence and handed the pressure over to my opponent. I could sense she was nervous and I took advantage of that,” said Yu

Host nation players depart but richer for the experience

Educate and Engage; Japan’s 20-Year Path to Striking Gold On and Off the Table