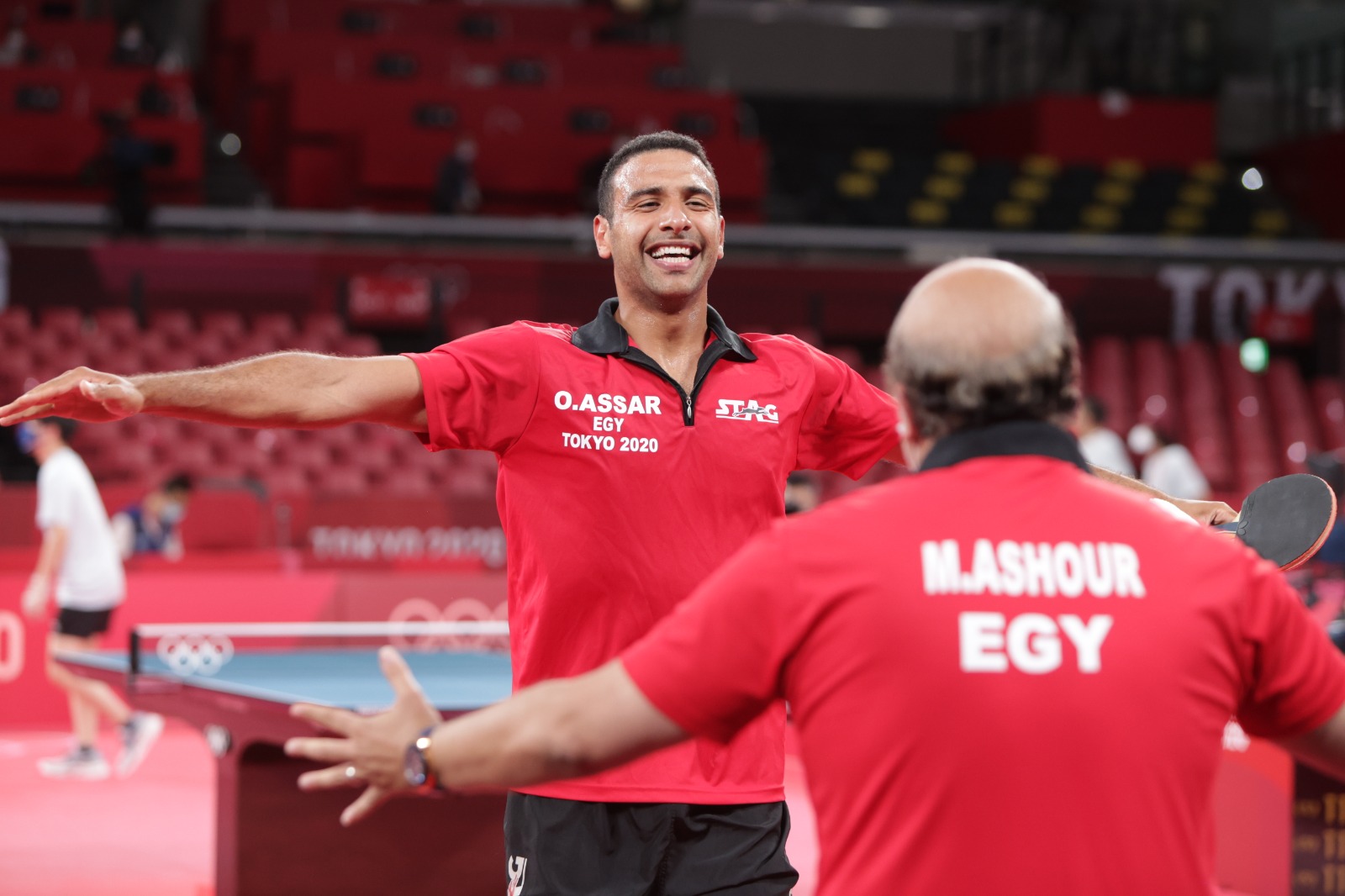 Assar does it again as Chuang exits

Omar Assar has become the first player from an Arab-speaking country to reach the Men’s Singles quarter-finals following another incredible display from the Egyptian. Making headlines earlier in the day with his stunning victory over Sweden’s Mattias Falck, number 28 seed Assar followed up with a 4-3 win over Chinese Taipei’s Chuang Chih-Yuan (11-8, 6-11, 11-8, 7-11, 11-9, 5-11, 11-7).

“I’m very honoured with my performance today. I’m very proud of myself and also happy with the support I got from my family. They woke up so early in Egypt and Germany. Making my son wear a shirt with the logo of Egypt. It is really nice, to be able to play in the quarter-final is a very big thing for me. It was a very long day. After beating Mattias Falck, I had to go back to prepare, take a shower and wish for another good performance. We missed the car and we were very late. We only had 15 minutes to practise but I was really lucky I was able to do well. I have to give credit to Chuang Chih-Yuan, he’s a world class player. We played for the same club before in France and I have huge respect for him. I wish for a very good performance and I play point by point. Ma Long is the greatest player of all time, an amazing player. But I’m playing well here and I’ll do my best and fight for every point. And then we see how it goes,” said Assar 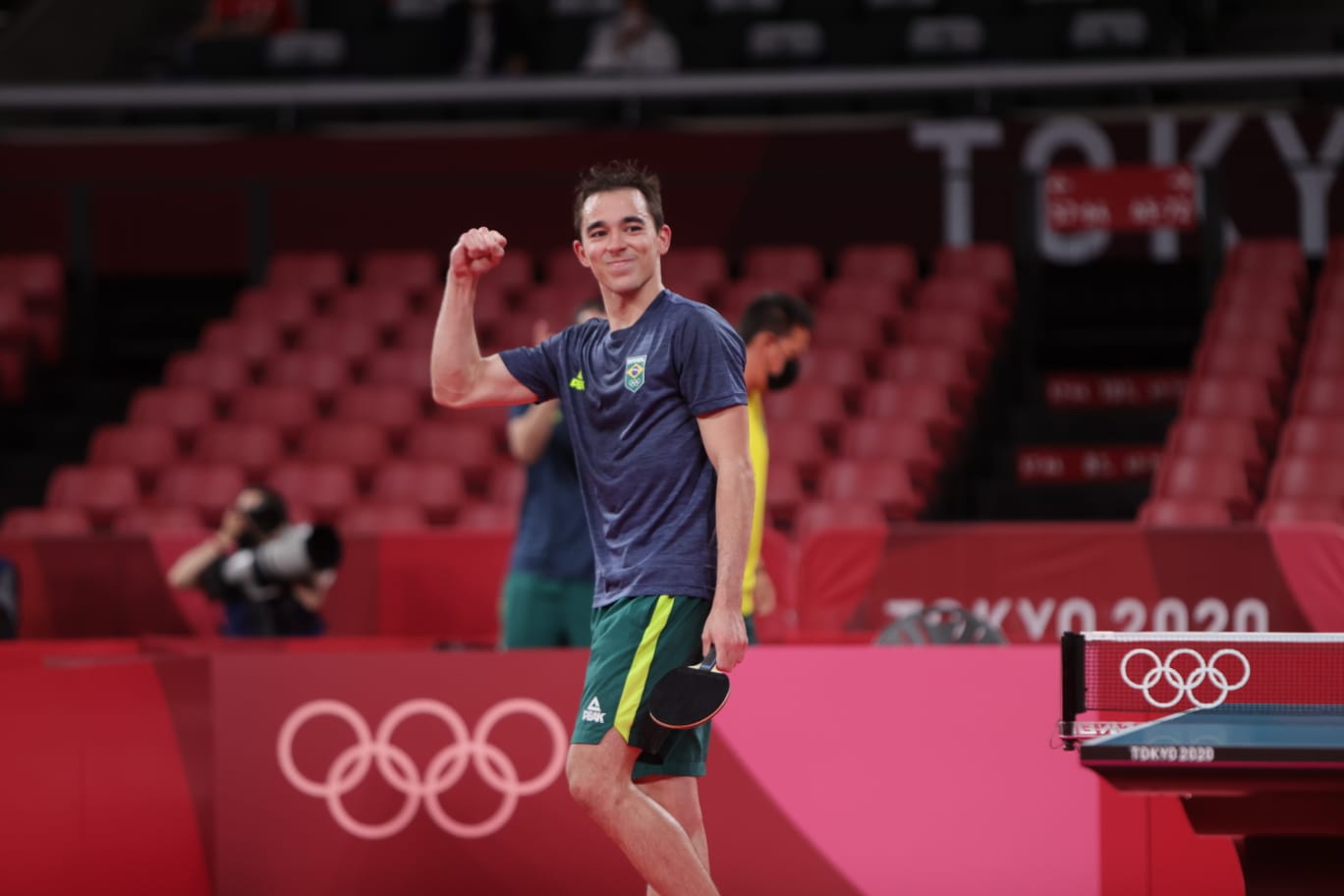 Brazilian star Hugo Calderano is through to the Men’s Singles quarter-finals for the first time on the Olympic Games stage after successfully negotiating a tense meeting with Korea Republic’s Jang Woojin. Fourth seed Calderano fought back from a losing position twice after games three and five before putting together back-to-back game wins to squeeze through (11-7, 9-11, 6-11, 11-9, 4-11, 11-5, 11-6). 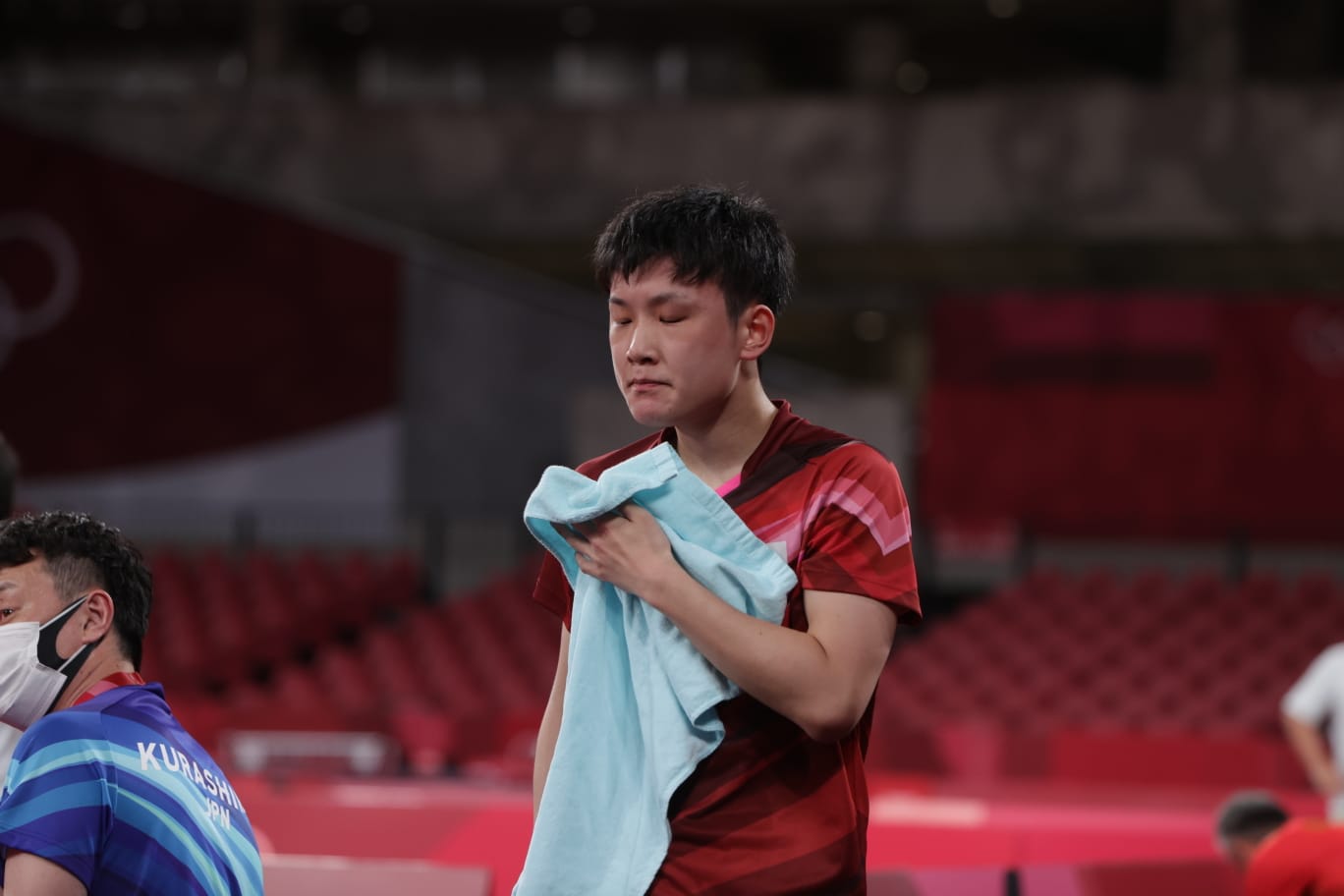 Japanese favourite and teenage sensation Tomokazu Harimoto has been eliminated in the Men’s Singles round of 16 following a heartbreaking seven-game defeat. The 18-year-old, seeded third in Tokyo, held the lead after games one and five but struggled to keep Slovenia’s Darko Jorgic at bay. Down to the final game, number 18 seed Jorgic could see the finish line, and he grabbed the opportunity with both hands, crushing Harimoto’s dreams of a medal finish on home soil (10-12, 11-9, 11-3, 10-12, 8-11, 11-7, 11-7).

“It’s just an amazing feeling for me to beat Harimoto in his own country and be in the quarter-final. I prepared well with my coach, I was strong mentally today and didn’t show any signs of nerves. I was fighting for every point and this was my goal. If you play top 10 players then you have to be aggressive, if you play safe then they will punish you. I don’t think he was expecting this from me today, it’s just amazing!” said Darko Jorgic 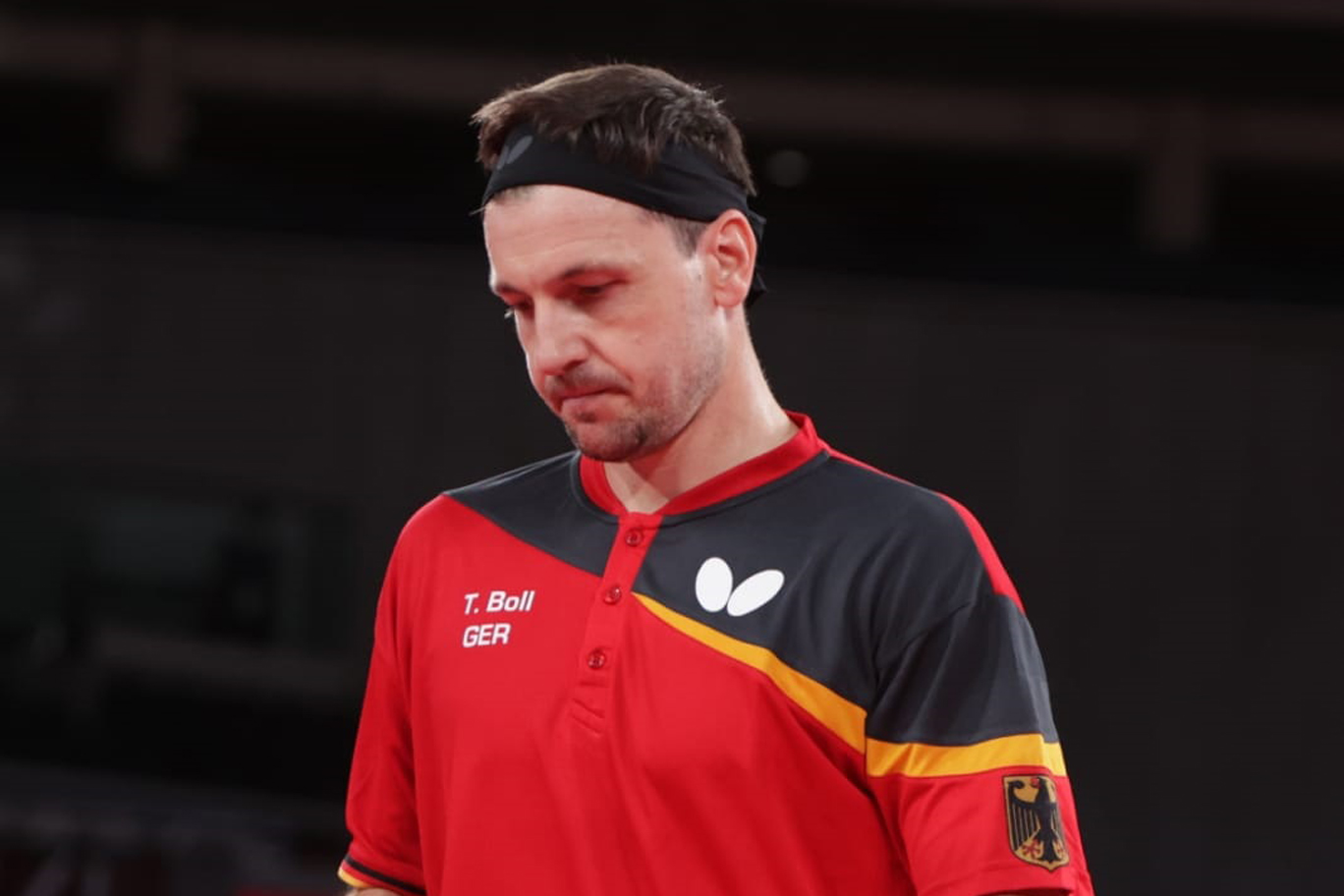 The upsets continue to fly in thick and fast with Germany’s Timo Boll the latest high-profile player to fall earlier than anticipated. Number eight seed Boll lost out to Korea Republic’s Jeoung Youngsik across five games (11-8, 7-11, 11-7, 11-9, 11-4), ending any hopes of a first singles medal in Tokyo. Boll’s defeat sees him fall at the round of 16 hurdle yet again having done so in 2008, 2012 and 2016.

“I thought I made a good start at the beginning, but then he found his rhythm and he started to resemble a wall. Even from difficult positions he had good answers, normally my positioning causes other players problems but for him it actually proved to be one of his strengths. Overall, he played really well so congratulations to him. It’s still a long wait for the next Olympic, I’m physically fit and if I’m still good enough by then to be a part of the German team then why not,” said Boll 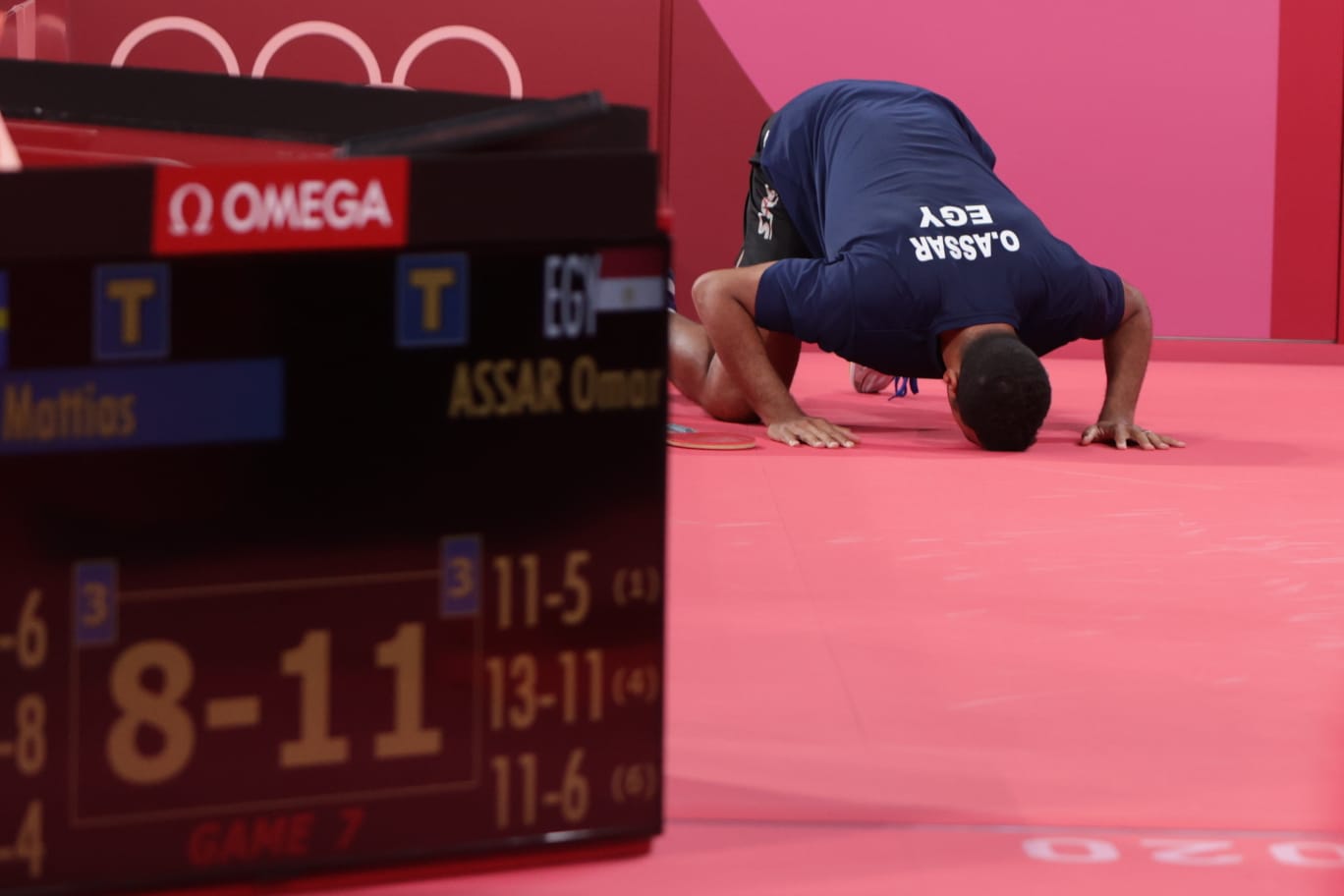 Egypt’s Omar Assar stunned Sweden’s Mattias Falck by beating the world number eight 4-3 (11-5, 6-11, 8-11, 13-11, 4-11, 11-6, 11-8) in a seven-game thriller to seal his passage into the Men’s Singles round of 16. The Egyptian, who is ranked 33 spots below Falck in 41st position, produced another Goliath performance and took the game to his much-fancied opponent. The enthralling battle saw the lead change hands all through six games before Assar eventually closed out the match in an hour and five minutes with a 11-8 victory in the decider. 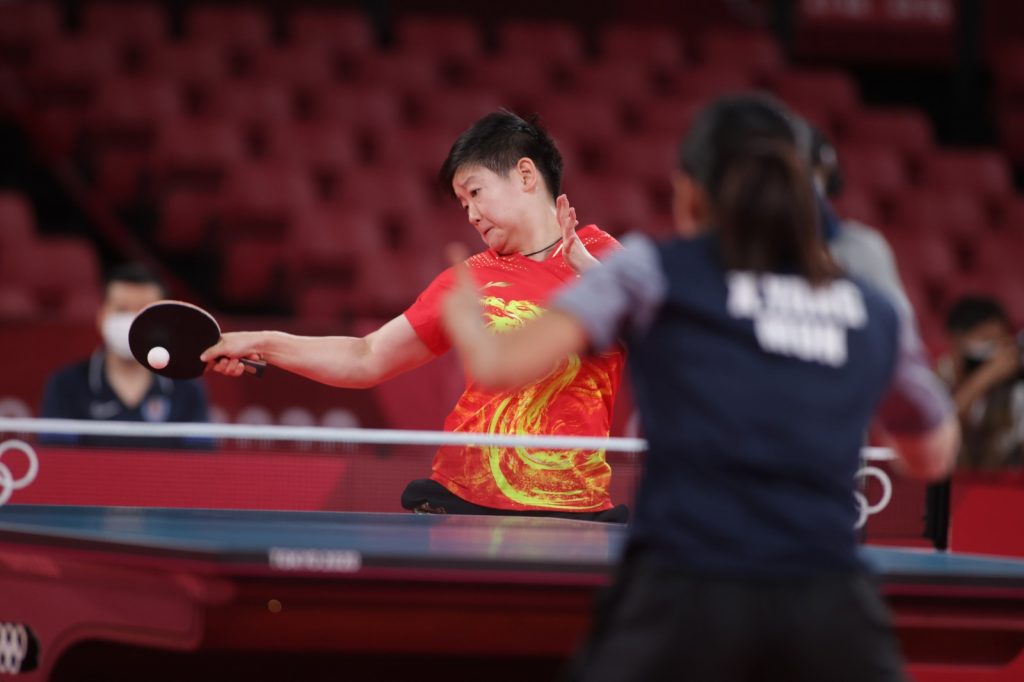 China’s Sun Yingsha took just 29 minutes to beat Monaco’s Yang Xiaoxin 4-0 (11-6, 11-5, 11-5, 11-3) in her senior Olympic Games debut. The 2018 Youth Olympic Champion showed no signs of nerve as she outclassed Yang in straight games. Sun’s dominance over Yang was evidence as the Monegasque only held the lead twice- once at 5-4 in the first game and second when she won the opening point in the third game. 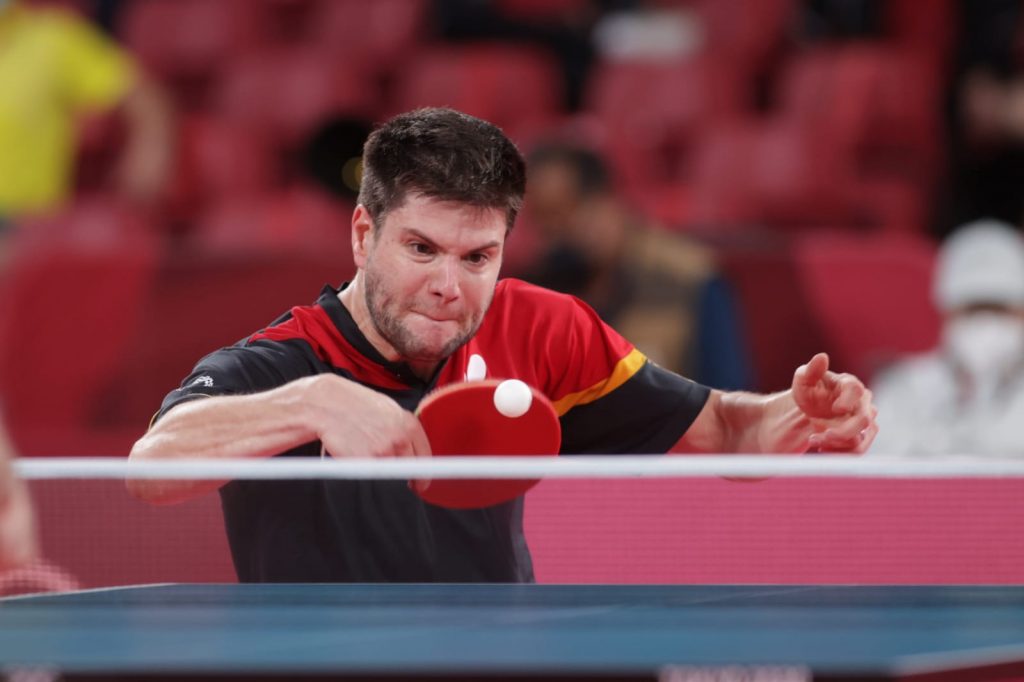 Germany’s Dimitrij Ovtcharov was in imperious form as he swept past Kirill Skachkov from the Russian Olympic Committee 4-0 (13-11, 11-3, 13-11, 11-4) to book his place in the Men’s Singles round of 16. Ovtcharov took the first game 13-11 before cruising to a 11-3 victory in the second game in six minutes. Skachkov put up a stiffer challenge in the third game but went down 11-13 before the German wrapped up proceedings with a 11-4 win in the fourth game. 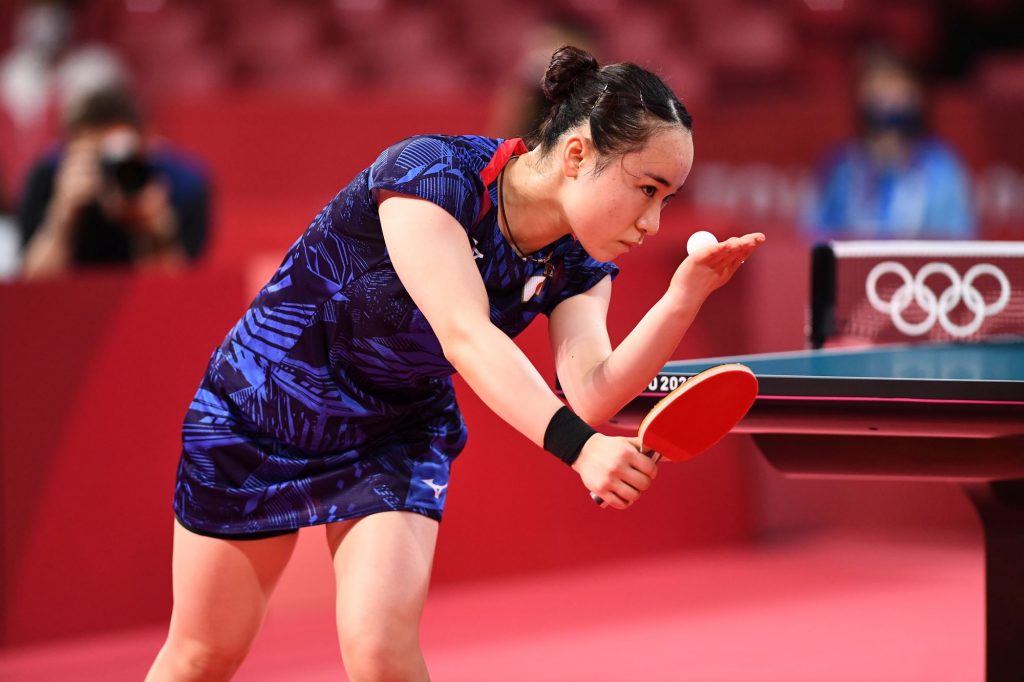 Fresh off her historic Mixed Doubles victory last night, Japan’s Mima Ito continued where she left off by winning her third round Women’s Singles match against Portugal’s Yu Fu 4-1 (11-9, 5-11, 11-5, 11-4, 11-5). The Japanese won the first game 11-9, and her medal hopes were briefly threatened when she lost the second game 5-11. However, the contest was over in the next 19 minutes, with the 20-year-old Ito winning the next three games to advance to the next round of 16 where she will take on Thailand’s Suthasini Sawettabut. 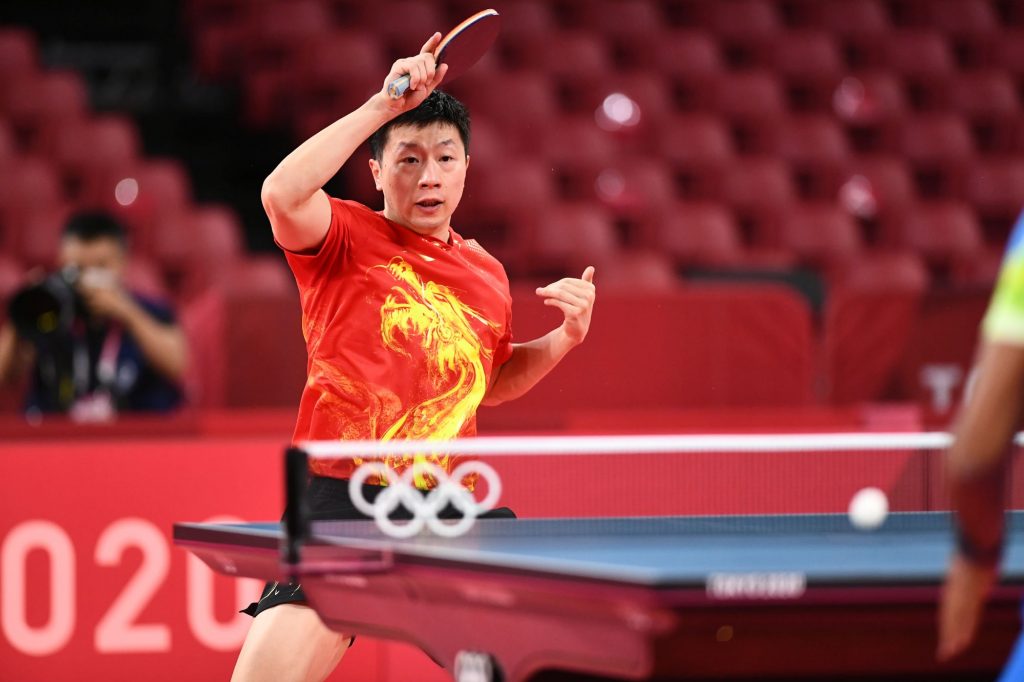 China’s Ma Long started his Olympics defence well by beating India’s Achantha Sharath Kamal 4-1 in the third round of the Men’s Singles competition at the Tokyo Metropolitan Gymnasium. Sharath lost the first game 7-11 but raced to an 8-4 lead in the second before Ma levelled it to 8-8. The Indian won two consecutive points to reach two game points and took the second game 11-8. Ma then came out with all guns blazing and won the next three games in 26 minutes to underline his status as one of the world’s best table tennis players. 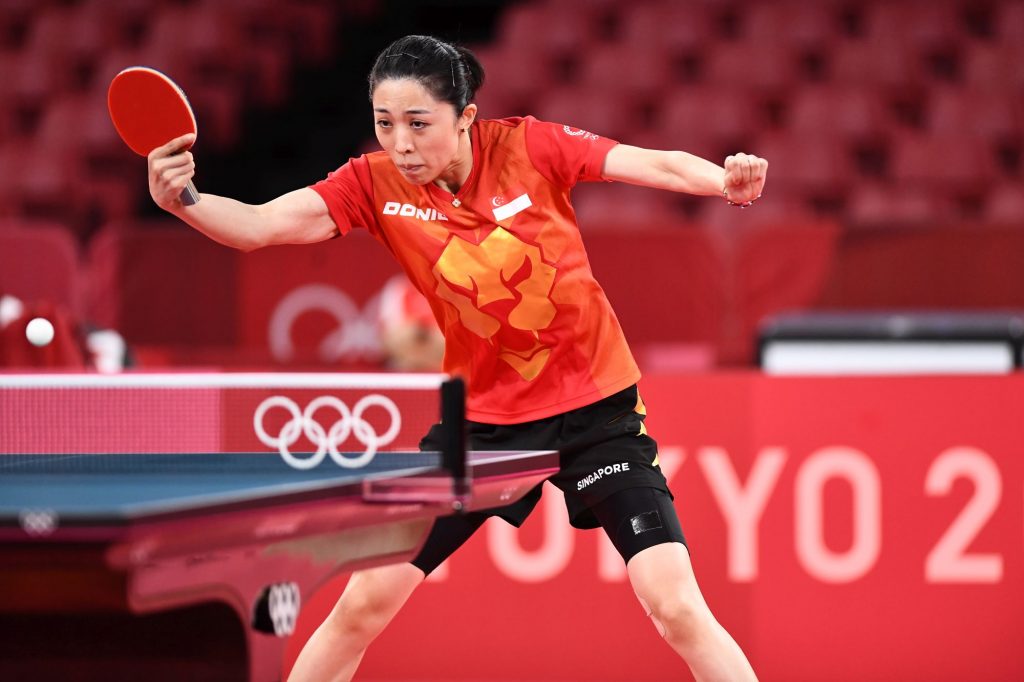 Yu proves too strong for Cheng

Singapore’s Yu Mengyu took down Mixed Doubles bronze medallist, Cheng I-Ching in straight games, winning 4-0 (11-5, 11-9, 12-10, 11-6) to advance into the round of 16. Yu and Cheng have met 13 times on the world stage before, with the Singaporean winning 10 out of 13 of their previous encounters. The Singaporean, who is seeded 26th, gained the upper hand over fourth seed Cheng again by beating her in 39 minutes despite nursing a chronic back injury. Yu has not dropped a single game so far. She received a bye into the second round when she beat Shao Jieni of Portugal by a similar 4-0 scoreline. 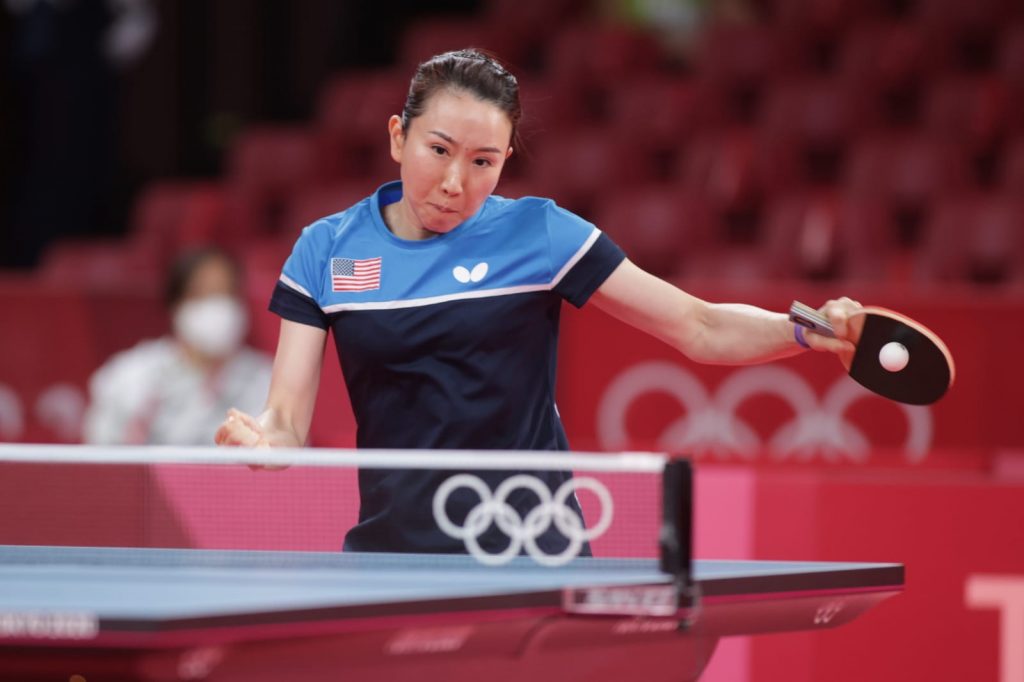 American Liu Juan, ranked 450th in the world and seeded 68 at the Tokyo 2020 Olympic Games, took down Romania’s 14th seed Bernadette Szocs and the world number 26 in an absorbing contest that saw the Romanian make her exit from the Women’s Singles after receiving a bye into the third round. Liu seized the early initiative by taking the first game 11-4 before Szocs rallied back by winning the next two games. Liu regained her advantage when she outplayed Szocs in the fourth and fifth game before closing out the match in the sixth game 11-3 in five minutes to win 4-2 (11-4, 6-11, 6-11, 11-9, 11-8, 11-3). 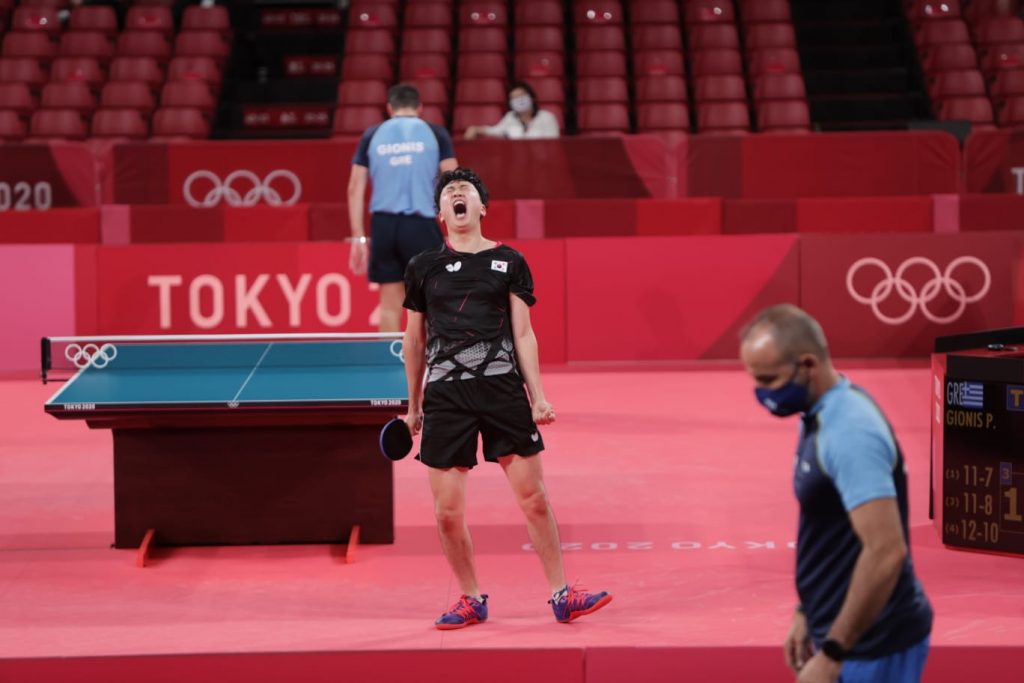 Republic of Korea’s Jeoung Youngsik came back from the brink of defeat by saving seven match points in the fifth game in his clash with Greek opponent Panagiotis Gionis to eventually win 4-3 (7-11, 11-7, 8-11, 10-12, 12-10, 11-6, 14-12). It took 88 minutes and 47 shots in rallies before the Korean finally emerged victorious, having stared at defeat in the fifth game at 4-10 down. The final game went down the wire with Jeoung and Gionis battling tooth and nail before the Korean put up an amazing show of steel to win the decider 14-12. Jeoung will have another titanic task at hand as he goes on to meet Germany’s Timo Boll in the next round of 16 of the Men’s Singles.