Would you believe it!? Japan has won its first-ever gold medal at the Olympic Games following a remarkable performance from Jun Mizutani and Mima Ito in the Mixed Doubles final!

A simply incredible affair, Chinese top seeds Xu Xin and Liu Shiwen looked well on course for an expected victory after taking the opening two games in comfortable fashion, but out of nowhere, second seeds Mizutani and Ito hit back. Back-to-back game wins drew the Japanese pair level before edging ahead with another success in game five. Xu and Liu managed to force a decider, but it wasn’t enough as Mizutani and Ito wrote their names down in history (5-11, 7-11, 11-8, 11-9, 11-9, 6-11, 11-6). 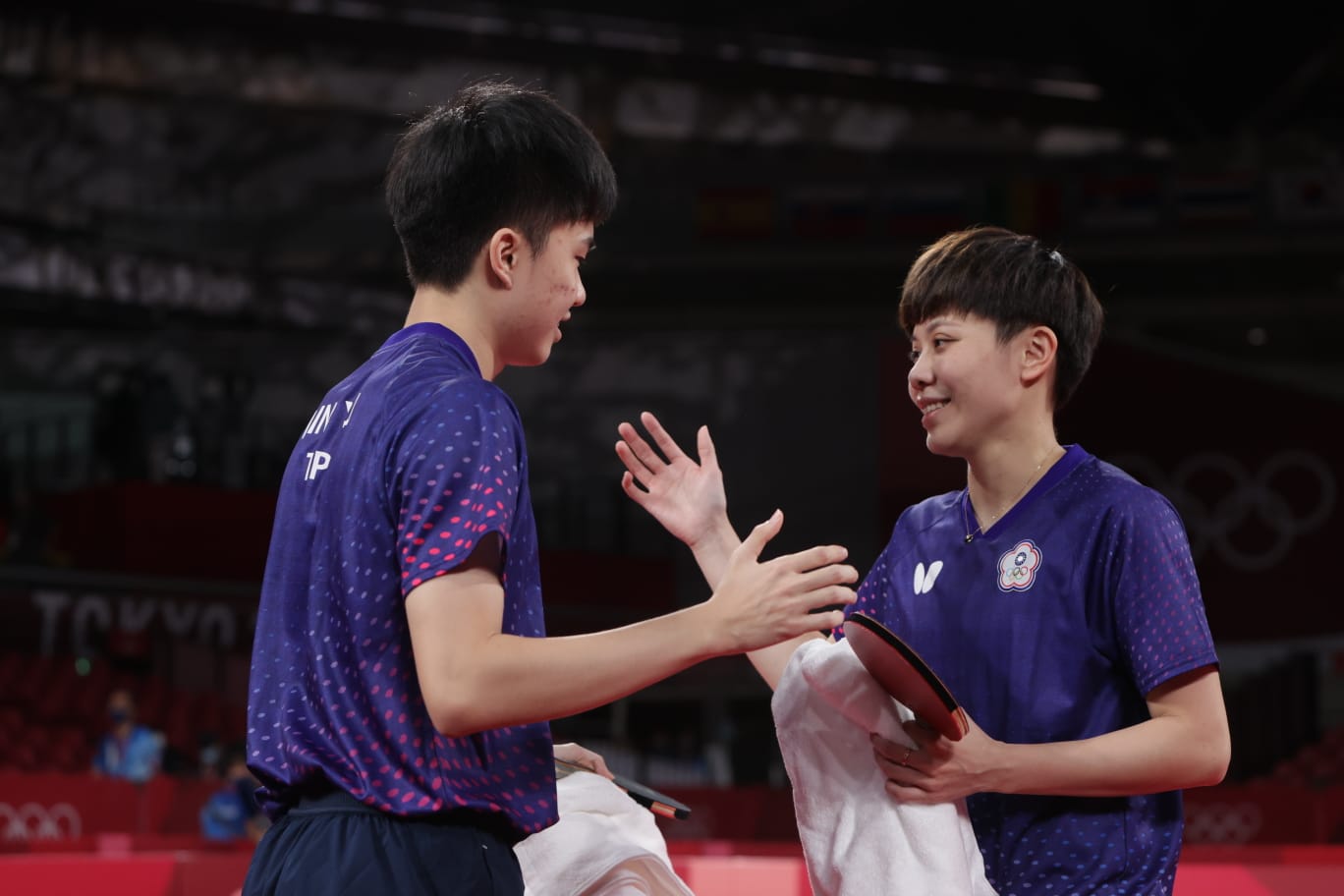 The first medal up for grabs has been awarded to Chinese Taipei’s Lin Yun-Ju and Cheng I-Ching following an exceptional display from the pair in the Mixed Doubles bronze medal match. Third seeds Lin and Cheng only needed the four games to see off French number eight seeds Emmanuel Lebesson and Yuan Jia Nan (11-8, 11-7, 11-8, 11-5), earning Chinese Taipei’s third medal at the Olympic Games in the process.

Carrying the hopes of a nation on his young shoulders, Japan’s Tomokazu Harimoto is off to a strong start at the Tokyo Metropolitan Gymnasium after securing his passage to round four with little difficulty. The 18-year-old held the upper hand over Hong Kong, China’s Lam Siu Hang by a decisive 4-1 score-line (11-9, 13-11, 8-11, 12-10, 12-10), but with four of the five games decided by a two-point margin, the outcome could very well have been different on another day. 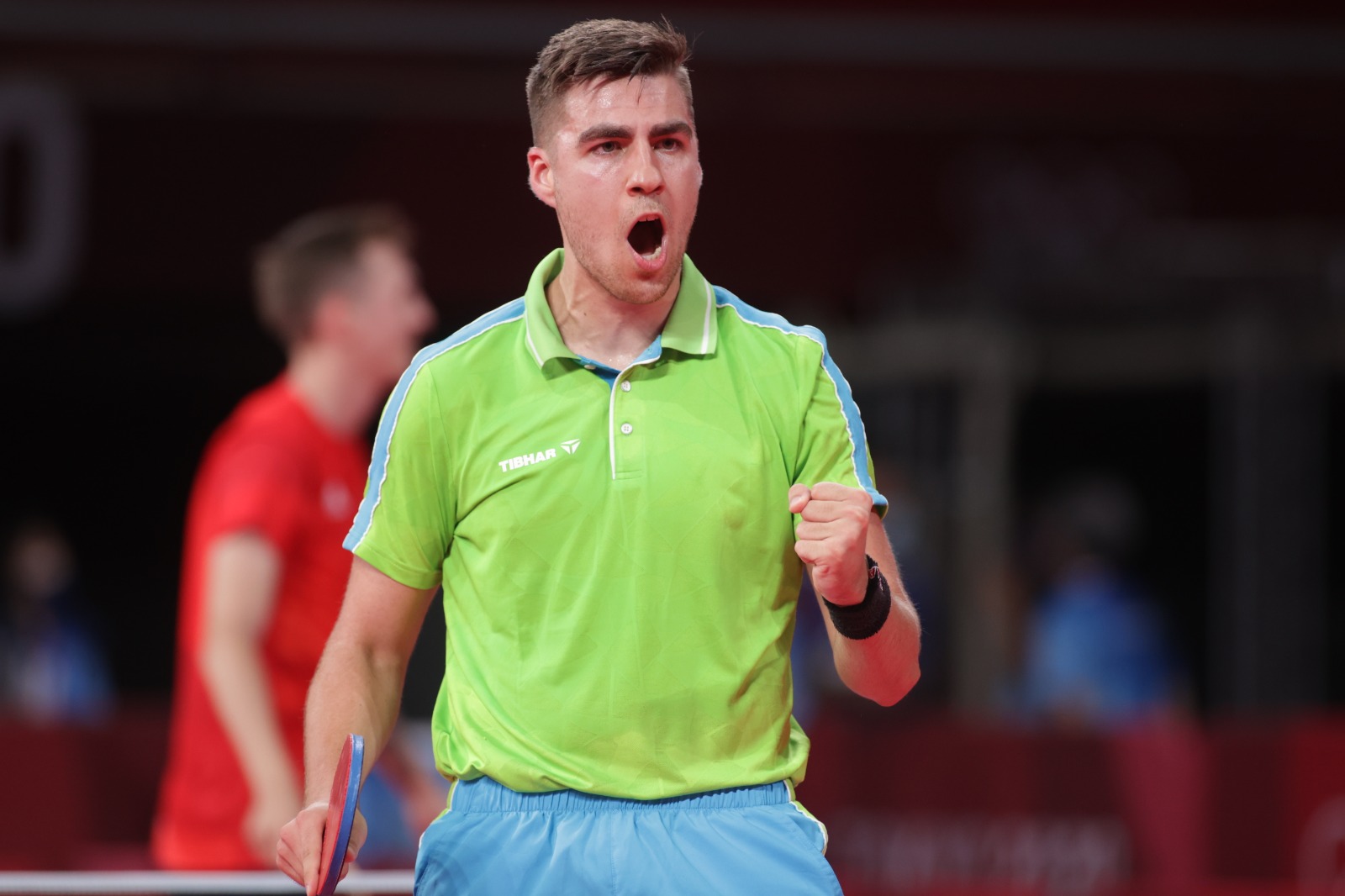 Number 11 seed Liam Pitchford has suffered defeat in his opening Men’s Singles encounter at Tokyo 2020, losing out to Slovenia’s Darko Jorgic, seeded 18th. Decided across six games, the match was predictably tight, with both players still level by the close of game four. Claiming the following two games by the narrowest of margins, it was Jorgic who rose to the occasion (11-8, 7-11, 12-10, 11-13, 11-9, 12-10) and now moves through to round four. 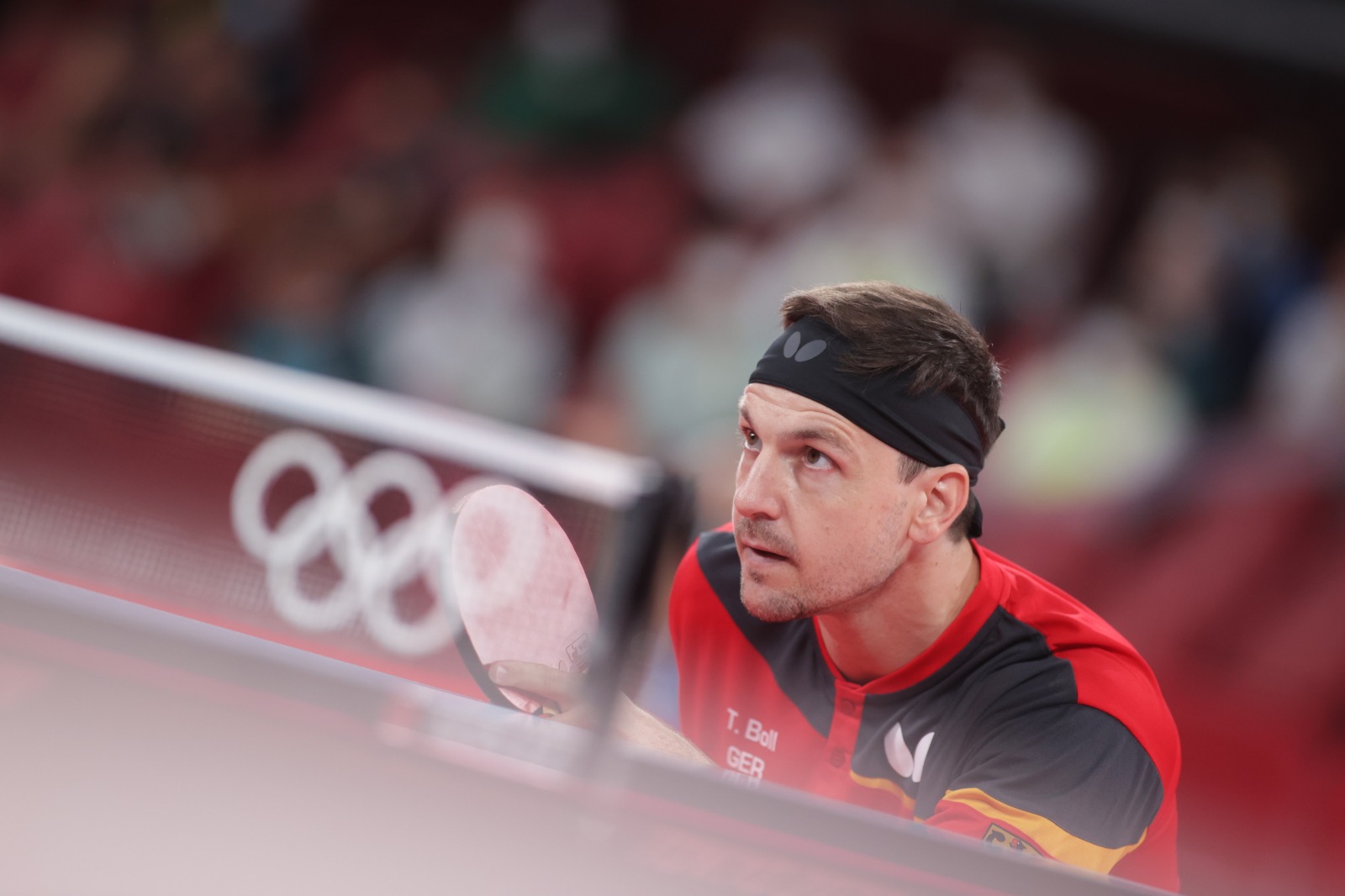 Germany’s 40-year-old Timo Boll lived up to his billing as one of table tennis greats when he defeated Kazakhstan’s Kirill Gerassimenko 4-1 to progress to the round of 16. It was not a straightforward affair for Boll as Gerassimenko was on fire in the opening game, stunning the German legend 11-7. But Boll turned the tables on the Kazakhstani when he won the next four games convincingly 11-6, 11-7, 11-2, 11-1, setting himself up for another potential medal finish at the Tokyo 2020 Olympic Games. The former world number one made his Olympics debut at the 2000 Sydney Games and has won one silver (2008 Beijing Games) and two bronze medals (2012 London and 2016 Rio De Janeiro) in the Teams event.

“I was put under pressure when I lost the first game. But I’m very happy I was able to turn it around from the second game. I was able to find the solutions, and I believed in myself,” said Boll. 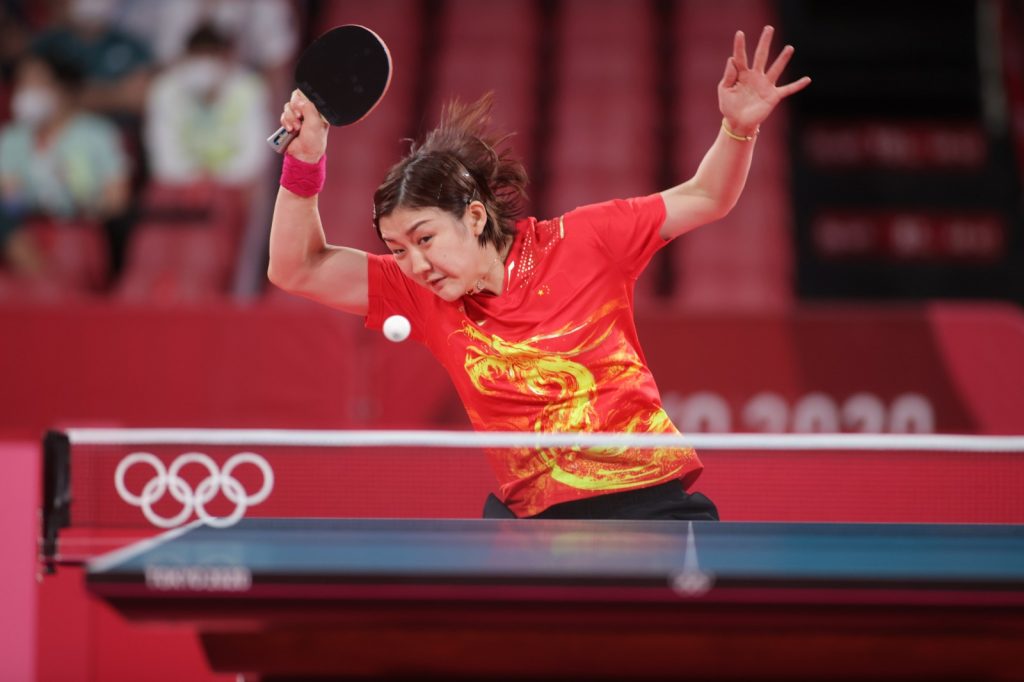 China’s Chen Meng showed why she is the world number one when she dispatched Switzerland’s Rachel Moret quickly with a 4-0 victory in 21 minutes. Cheng, who will spearhead China’s challenge in the Women’s Singles, won the first game 11-3 in just four minutes, and she proved too strong for Moret by steamrolling past her Swiss rival 11-6, 11-2, 11-7 in 14 minutes. The Chinese will face Canada’s Zhang Mo in the round of 16 after the Canadian created one of the Games’ upsets by defeating Germany’s Petrissa Solja, who was regarded as one of the medal favourites at the Tokyo 2020 Olympic Games.

“I felt very calm and relaxed on the court today. I did not give myself too much pressure. The matches will get tougher as we go along, but I do not want to think too far ahead at this point. I want to do my best in every match,” said Chen. 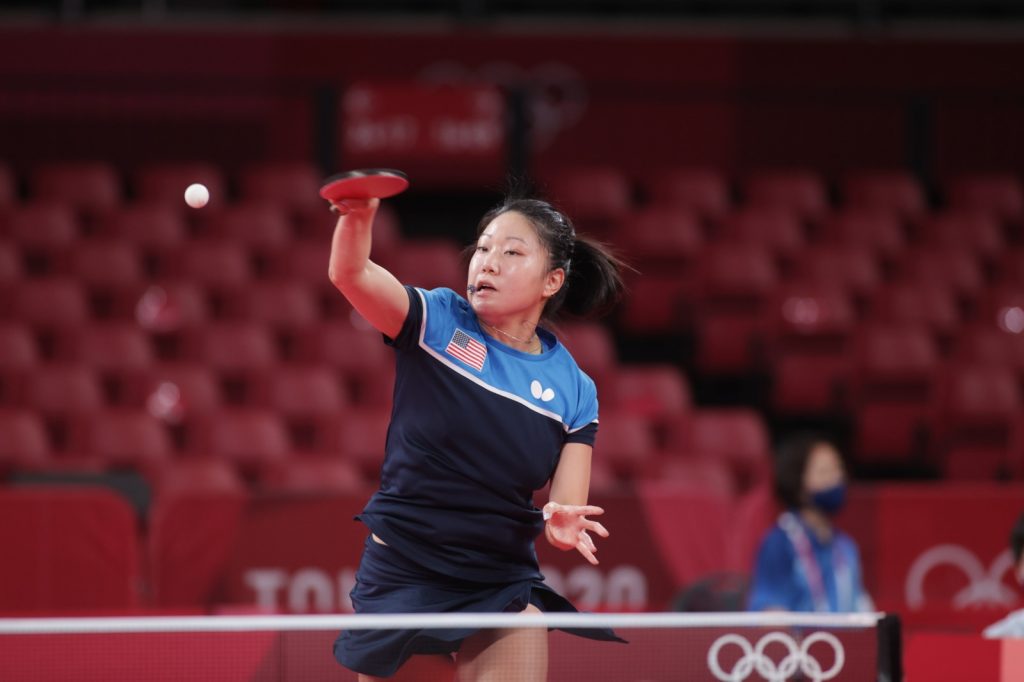 American Lily Zhang endured a nail-biting start to her opening campaign at the Tokyo 2020 Olympic Games but eventually prevailed in her next four games to dispatch Nigeria’s Offiong Edem 4-1 (13-15, 11-2, 11-2, 11-8, 11-6). Edem started strongly by taking the first game in 10 minutes. But Zhang, who made her breakthrough as the youngest-ever member of the U.S. women’s national team at the age of 12, regained her composure quickly by winning her next two games, 11-2, 11-2 in under nine minutes. She proved too strong for the Nigerian, clinching the fourth and fifth game 11-8, 11-6 to advance. 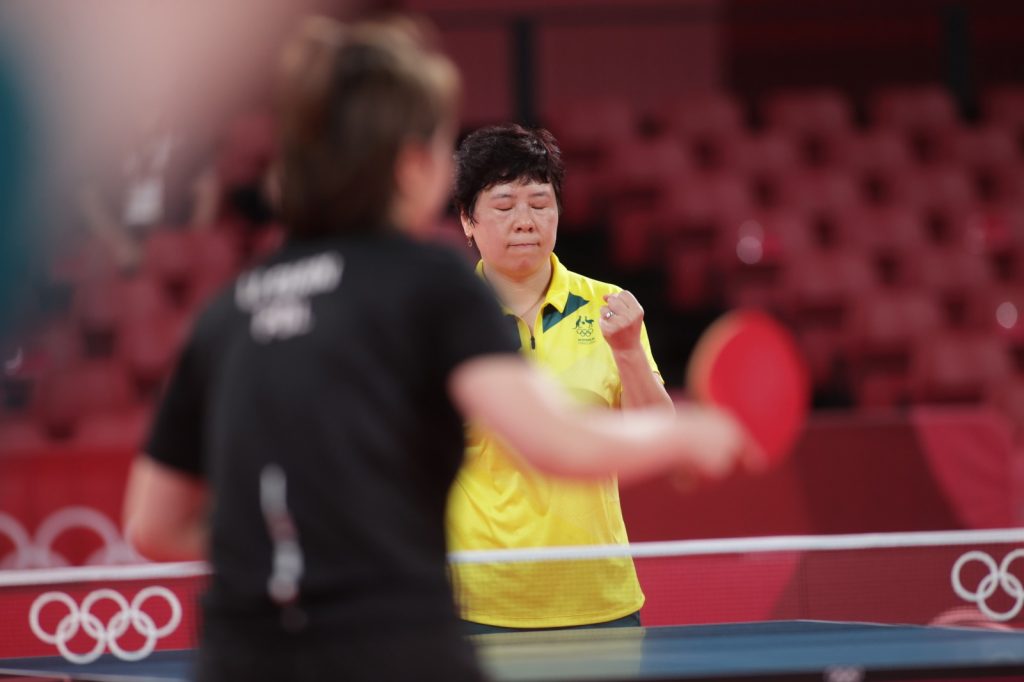 48-year-old Lay Jian Fang continued her brilliant run at the Women’s Singles when she took down Poland’s Li Qian 4-2 to advance to the third round. Lay enjoyed a convincing 4-0 victory over Cuba’s Daniela Fonseca in the preliminary round before notching another win over Italy’s Debora Vivarelli in the first round. The six-time Olympian and a mother of two teenagers would go on to claim another scalp by securing a hard-fought victory over her Polish opponent, more than 10 years her junior. Lay took the first two games 11-7, 11-6 before Li levelled the score by taking the third and fourth games. Lay, however, outplayed Li in the last two games 11-4, 11-4 to secure another morale-boosting win. 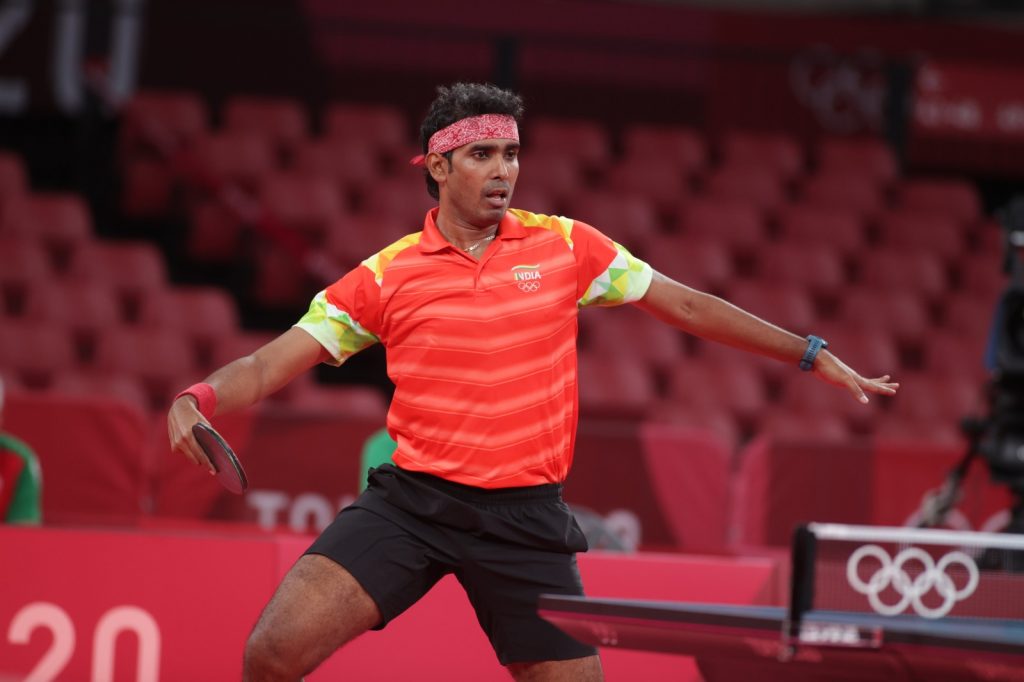 India’s Kamal Achanta enjoyed a promising start to his Men’s Singles campaign by beating Portugal’s Tiago Apolonia 4-2 (2-11, 11-8, 11-5, 9-11, 11-6, 11-9) as the first match of the table tennis competition got underway at the Tokyo 2020 Olympic Games. It was a welcome relief for the 39-year-old Indian as he returned to winning ways after suffering an earlier defeat to Chinese Taipei in the Mixed Doubles on Saturday. Achanta went down early 2-11 in the first game, but the pendulum swung the Indian’s way as he took the second and third game, 11-8, 11-5. Apolonia levelled the score by taking the fourth game 11-9 but, Achanta proved too strong for the Portuguese by winning the fifth and sixth game to progress to the third round, where China’s Ma Long awaits.