The first ITTF High Performance camp in 12 months concluded on Monday 15 March 2021. For 13 days, participants of the WTT Middle East Hub or Olympic qualification tournaments were invited to train twice daily under the watchful eye of ITTF High Performance Elite Coach Massimo Costantini. Oleg Shemet was on site to assist with training as well as organizational requirements from the Qatar Table Tennis Association (QTTA).

The camp was targeted at players of different levels and with different needs. Some players and coaches attended between the two WTT events, some were preparing for the World Singles Qualification tournament, and others again for the Asian Olympic Qualification tournament. “Despite some initial challenges in managing the expectations of widely differing levels and needs, overall we delivered quite good work. The concept of the camp was to understand the players’ needs, and we were successful also thanks to the cooperation with the coaches”, Massimo said.

Part of the biosecure bubble that included the WTT Middle East Hub events and the Olympic qualification tournaments, the camp’s daily schedule was split in two, with the morning session dedicated to one-on-one training and the afternoon focusing on many balls drills. Since the differing levels of play called for different kinds of drills, the schedule also accommodated for individual drills and game-like situations.

“This kind of camp was a good experience and exercise for us”, Massimo said. “Usually we provide our training camps as a preparation for one specific competition. But here, we offered a camp alongside the competitions and an opportunity for players to train in between playing the separate competitions.” As with all ITTF High Performance training camps, it was based on a spirit of cooperation and commitment. 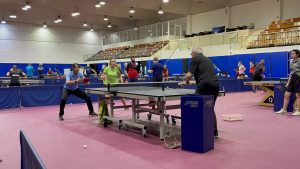 Qatar Table Tennis Association provided an excellent training environment with the Qatar National Table Tennis Center. It was set up with 12 tables, and each table offered a professional setting with enough space to eliminate distractions.

Besides the work at the table, there were also three educational sessions on Anti-Doping, Sleeping Habits and Injury Prevention in High Performance Sport, and an interactive media training session. In addition, the coaches assembled for a round table, discussing the daily work in table tennis centers.

“It was a really great idea and quite a big deal that QTTA and ITTF decided to organize this High Performance Training Camp before the World Singles Qualification Tournament in Doha. Well done players, coaches, organizers and all staff who made this training camp a success”, said Oleg Shemet.

In the following World Singles Olympic Qualification tournament, two of the five qualified players had attended the training camp: Sweden’s Linda Bergström and the Czech Republic’s Lubomir Jancarik, while at the subsequent Asian Olympic Qualification Tournament, Clarence Chew successfully grabbed a spot for Tokyo. Jancarik said: “It was nice to train between the two tournaments, to have a full-fledged training with an overall good atmosphere throughout”.

Coach Petr Nedoma (CZE) added: “During the two tournaments and the world qualification of the individuals, it is difficult to fully train, to be able to imitate the preparation from the home environment to which we are used to. From this point of view, I perceive the participation of the Czech team of women and men in the training camp very positively and we are happy for that.”

Coach Gao Ding (SGP) remarked: “The training camp was very well organised and productive with high quality sessions and planning throughout. I would like to thank ITTF for this opportunity which was greatly beneficial for me as well as my players”

Kostas Vatsaklis (GRE), who joined the camp with his players Panagiotis Gionis, Ioannis Sgouropoulos and Aikaterini Toliou said: “I have to say, that the training camp was what me and my players wanted, and I have to admit that it was well organized and at a really high level”.

Sibel Altinkaya from Turkey mentioned: “In this difficult times for all of us I think that this training camp was very good for all of the players and all the protocol for safety was excellent. I want to say thank you to ITTF for makes this camp possible and to all the coaching staff that worked very hard and tried to take the best from every player.”

ITTF High Performance & Development would like to thank QTTA for their hospitality and support throughout the training camp and Oleg Shemet for his precious assistance. .