Prized possessions, been there, got the shirt

Scan the globe and wherever your compass points, you will find someone who has unbridled enthusiasm for the sport of table tennis. Not because a whole gambit of trophies has been won at local, national or world level, not because of having excelled as a coach or gained high office as a distinguished official but for totally unusual and innovative reasons that stagger the imagination. 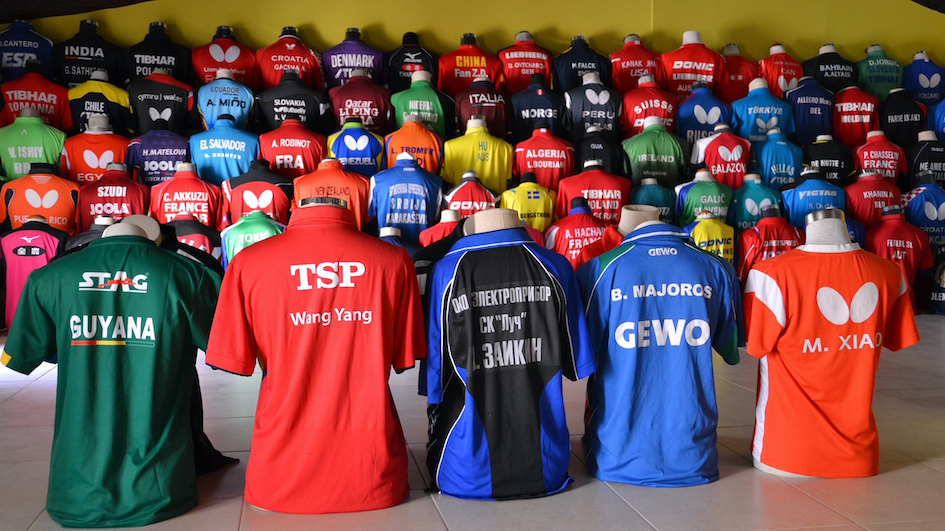 Such a person is Josep Francesch, resident in Vimbodi, a village in Catalonia, Spain; small by any standards, the 2018 census recorded just 917 inhabitants.

He is a player and assistant coach at the local Taula Borges Tennis Club and is most certainly putting his small village on the map; not because his club has gained outstanding success but because of his quite incredible collection, one of which the curator at the Victoria and Albert Museum in London would by proud!

Five years ago, he started to approach players for their shirts, the response has been quite staggering. He makes agreements with players to send them by courier or he travels to major championships, meets fellow collectors or whoever. 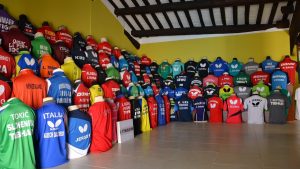 From the start he established the principle that all must be donations, no payments; as the collection grew, he faced the problem of how best to display the shirts, fortunately, he had space in the attic of his home but glass frames or similar were out of the question, too expensive.

Shopping in a local supermarket, his attention was diverted from the mundane tin cans and rows of sparkling drinks, he saw mannequins for sale, he bought 200!

Currently, he has 82 national team shirts, over 300 shirts in total, of which more than 200 are displayed on the mannequins, the shirts of Fan Zhendong and Timo Boll being prized possessions as is that of Jordi Morales, the reigning men’s class 7 Para world champion from Spain. 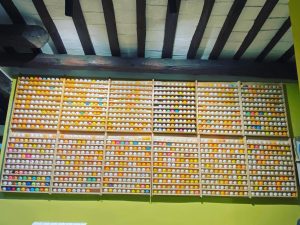 In addition, not just focused on clothing, amongst a host of other memorabilia, he has collected some 1,230 table tennis balls, all carefully displayed carefully on shelving.

“The truth is that the collection is beautiful, and it is a real pleasure for me to have these kits at home.” Josep Francesch

A magnificent collection and a tribute to the sport of table tennis, in September he has attracted the attention of TV3, the Catalan regional television and more recently in January Esport3 and Antena3.

Now he is waiting for a visit from representatives of the Guinness Book of Records but maybe first he needs to visit that supermarket for more mannequins!

It is one way he is contributing to the local economy and there is another; his village has the busiest postman in the whole region!