In addition to his position within the ITTF BoD, Park Docheon was the Chair of the Asian Table Tennis Union’s Technical and Umpires Committee, and he was very much a key figure within the Korea Table Tennis Association. He became the International Director in 1981, an office he held to the present day, also during that period from 2013 to 2016, he fulfilled the role of Vice President.

Most notably at the World Championships in 1991 in Chiba, he was the Public Information Officer for Korea United team, a position to which he was well suited.

On many occasions since that historic tournament, at press conferences, mischievous journalists would pose political questions regarding the situation between the Korea Republic and DPR Korea. Very quickly, Park Docheon would intervene, take to the stage, and make the emphatic well-reasoned comment “We are sportsmen”; any potentially embarrassing situation was quickly diffused.

Present at Asian Games, Olympic Games and World Championships amongst many other international events, Park Docheon played a major role in the organisation of the 2010 ITTF World Tour Grand Finals in Seoul but if there was a tournament which he revered the most, it was arguably the Asian Championships.

Well aware for the need to create competition in a continent where standards of play differ greatly, Park Docheon was deeply involved in major innovations.

In order to create high level competition from the start, in the team events, the six highest ranked outfits advanced directly to the quarter-finals, the remainder competed for the available two places. Equally all matches, including men’s and women’s singles, were best of five games; thus, the possibility of an upset was enhanced, excitement created.

Clearly unwell, he was present at the most recent edition of the tournament, staged in September 2019 in the Indonesian city of Yogyakarta. Just as always, he displayed an immense interest in proceedings; moreover, making sure that he spoke to officials and players alike. It was as though the tournament was his adopted home and he was the host welcoming his guests.

Quiet, reserved, never seeking the limelight, speaking in a gentle and caring manner, Park Docheon gained the respect of all; making decisions he displayed consideration and fairness, his opinions highly valued.

“It is such a big loss to Korea table tennis association and friends in Korea. Mr. Park Docheon had worked as an international director of KTTA for about 40 years and contributed a lot to the development of Korea table tennis. 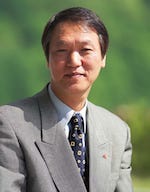 KTTA will always remember his great passion and dedication to Korea table tennis and we will do our best to carry on his noble legacy for our next generation.

Today is such a sad day but we will overcome this sorrow and move forward into a brighter future.”

Those were the words of Ryu Seungmin, IOC member, President of Korea Table Tennis Association and ITTF Executive Committee member in memory of Mr Park.

A man of the greatest integrity, Park Docheon lives in our memory, in our hearts, sadly missed, always remembered, our condolences.