Several world-class athletes have been added to the roster at the WTT Middle East Hub, which takes place between 3 – 13 March 2021 at Lusail Sports Arena in Doha, Qatar.

The level of competition has been raised at the first official events of the WTT era thanks to the introduction of some elite names entering as wildcards in the men’s and women’s singles fields. Meanwhile, the men’s, women’s and mixed doubles categories have also been confirmed. 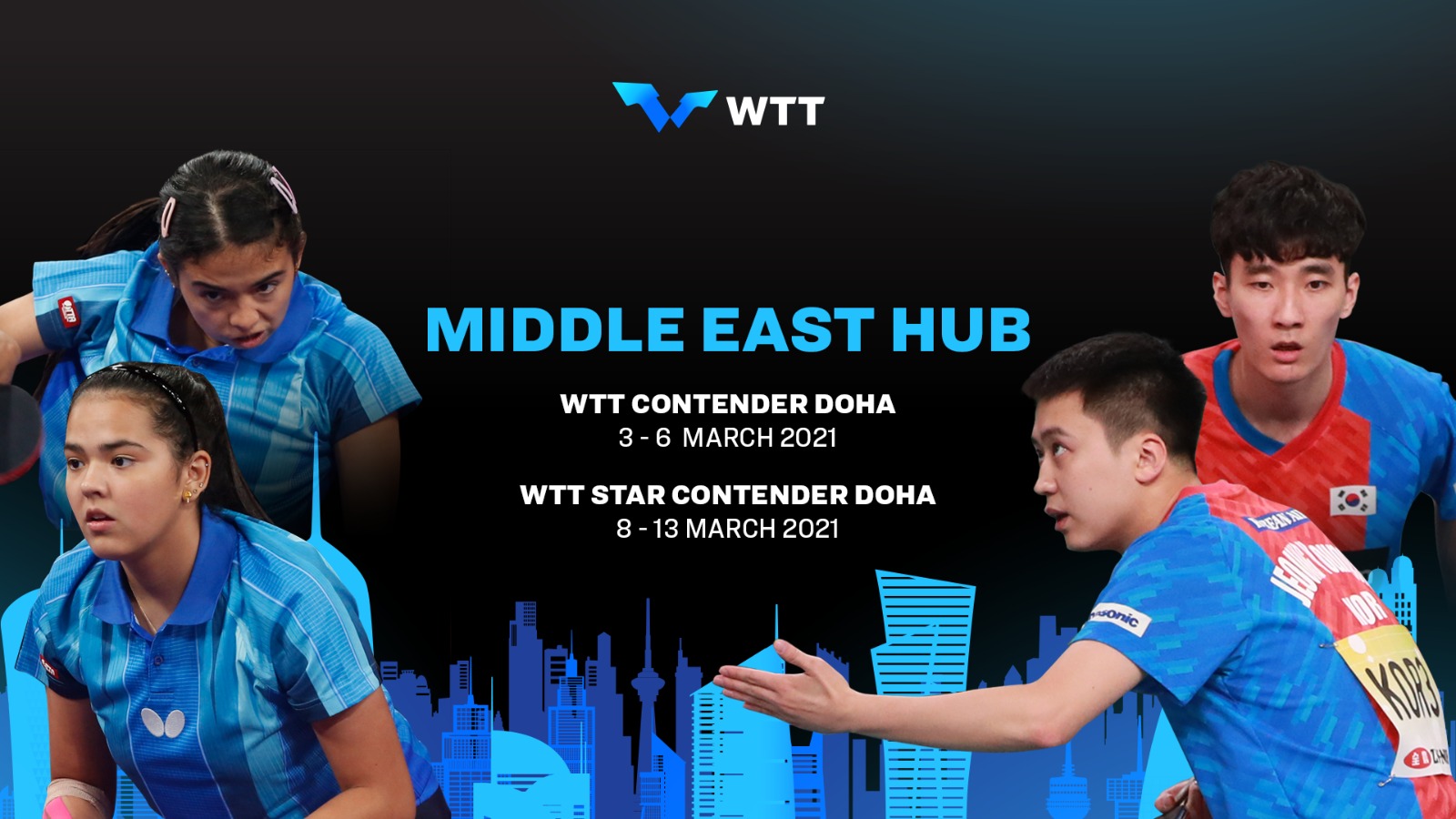 The Middle East Hub will feature two tiers of the new WTT event structure, with a WTT Contender followed by a WTT Star Contender event in consecutive weeks, providing the perfect preparation for some of the world’s leading names to be challenged by the best up-and-coming athletes in table tennis.

The brand-new event series is set to revolutionise the sport of table tennis, with players and fans positioned at the centre of WTT’s mission.

WATCH OUT FOR THE WILDCARDS!

In the men’s and women’s singles fields, the competition has been spiced up with a number of world-class wildcards entering the action from the main draw: 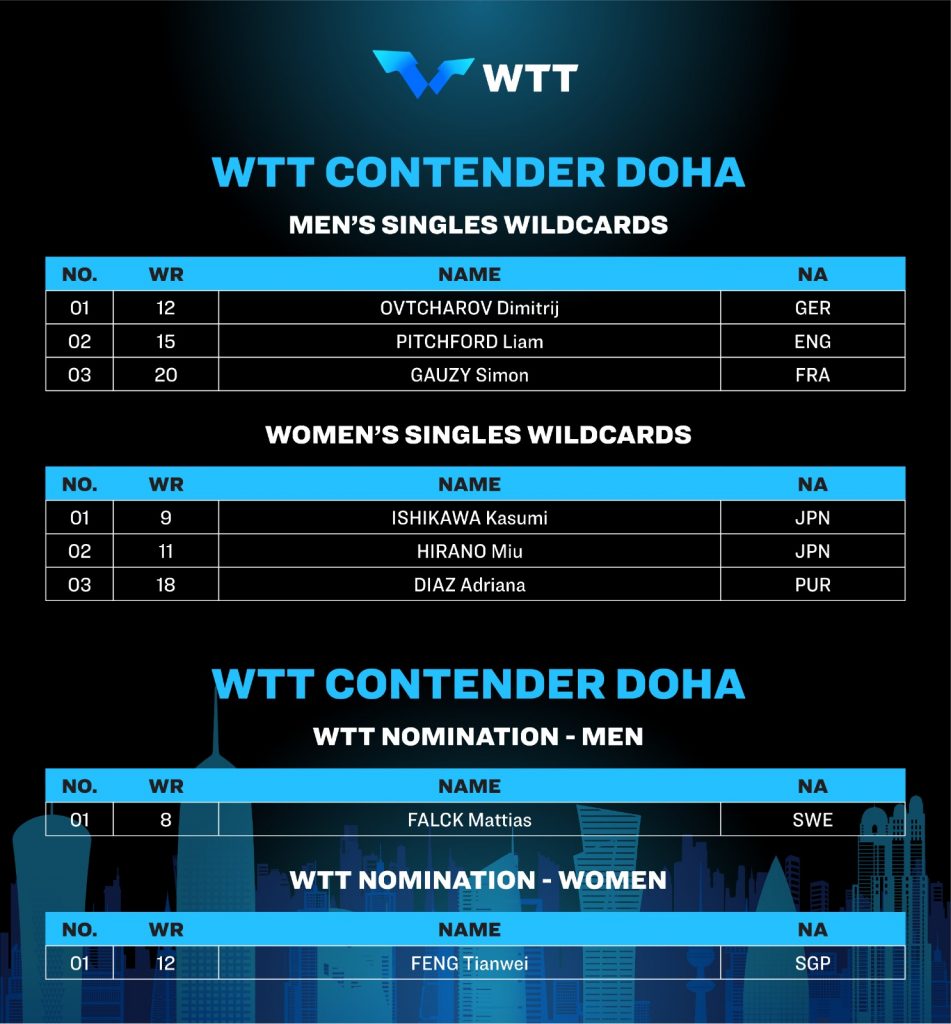 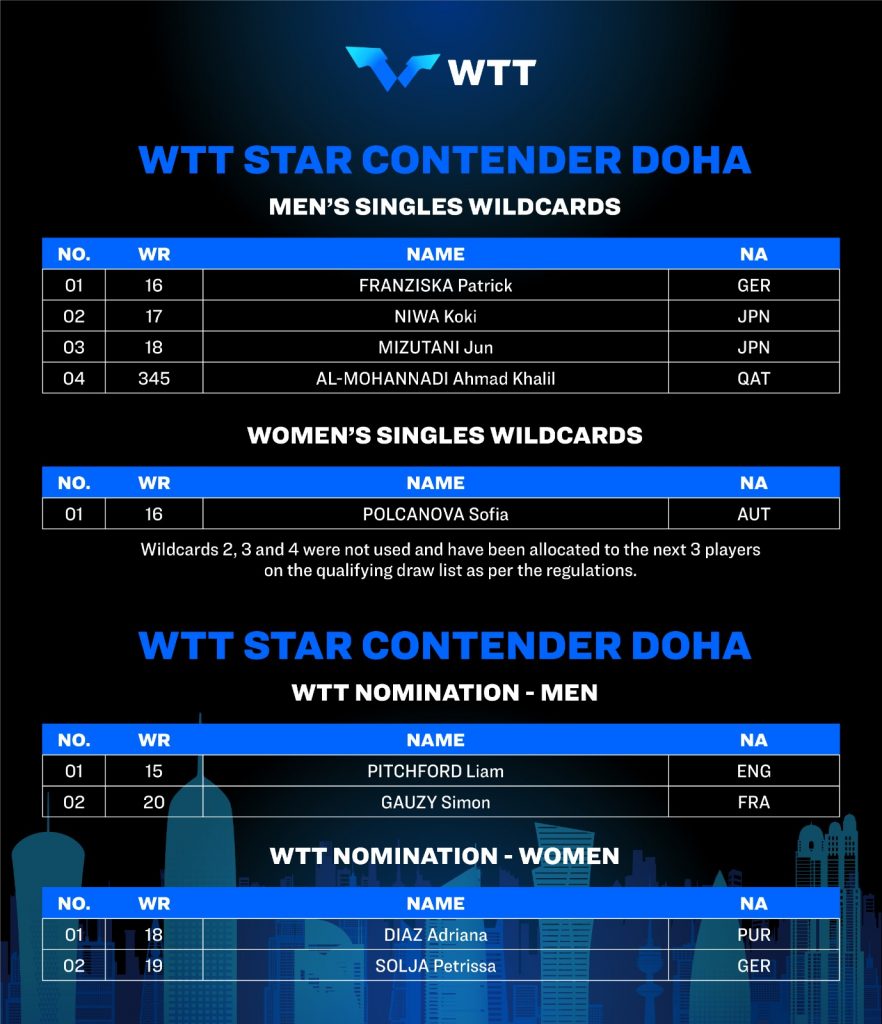 In addition, QTTA, as hosts of the Middle East Hub, have included several local stars as wildcard entries from the qualifying rounds.

Click here to see the full list of singles entries, including all wildcard allocations, for the Middle East Hub.

AT THE DOUBLE IN DOHA!

At WTT Star Contender Doha, Lee Sangsu and Jeoung Youngsik (Korea Republic) headline the men’s doubles field. The dangerous duo, who claimed bronze at the 2017 World Championships, are joined by Patrick Franziska and Qiu Dang (Germany) and Chuang Chih-Yuan and Chen Chien-An (Chinese Taipei) at the top of the order. For the WTT Contender event, Lee Sangsu is joined by Cho Daeseong, while Benedikt Duda will partner Qiu Dang.

Other notable entries across both events include the two-time European champions, Daniel Habesohn and Robert Gardos (Austria), the mixed nationality pairing of Alvaro Robles (Spain) and Ovidiu Ionescu (Romania), runners up at the 2019 World Championships, as well as Horacio Cifuentes and Gaston Alto (Argentina), silver medallists at the 2019 Pan American Championships.

Japan leads the competition in the women’s doubles field, as Kasumi Ishikawa and Miu Hirano are ranked top of both events. The pair were bronze medallists at the 2019 Asian Championships. Also flying the Japanese flag at both events will be Hina Hayata and Miyuu Kihara.

At WTT Star Contender Doha, Japan’s main competitors will be Chen Szu-Yu and Cheng Hsien-Tzu (Chinese Taipei) and Jeon Jihee and Shin Yubin (Korea Republic), while for the WTT Contender event, the top Korean pairing will be that of Jeon Jihee and Yang Haeun, runners up at the 2019 World Tour Grand Finals.

At both events, there will be representation from Pan America, provided by sisters Adriana and Melanie Diaz (Puerto Rico), and Europe, featuring two mixed nationality pairings in the form of Hana Matelova (Czech Republic) and Barbora Balazova (Slovakia) as well as Bernadette Szocs (Romania) and Sofia Polcanova (Austria).

Click here to see the men’s and women’s doubles entries for the Middle East Hub.

In the mixed doubles, the original draw size of 8-pairs has been increased to 16-pairs. Jun Mizutani and Mima Ito (Japan) are highest ranked at WTT Star Contender Doha, followed by the pairings of Lin Yun-Ju and Cheng I-Ching (Chinese Taipei), Xu Xin and Sun Yingsha (China), and Patrick Franziska and Petrissa Solja (Germany), bronze medallists at the 2019 World Championships. At WTT Contender Doha, meanwhile, it is Lin Yun-Ju and Cheng I-Ching who top the order.

Click here to see the mixed doubles entries for the Middle East Hub.

Here is confirmation of the top 10 pairings across all doubles categories at both events: 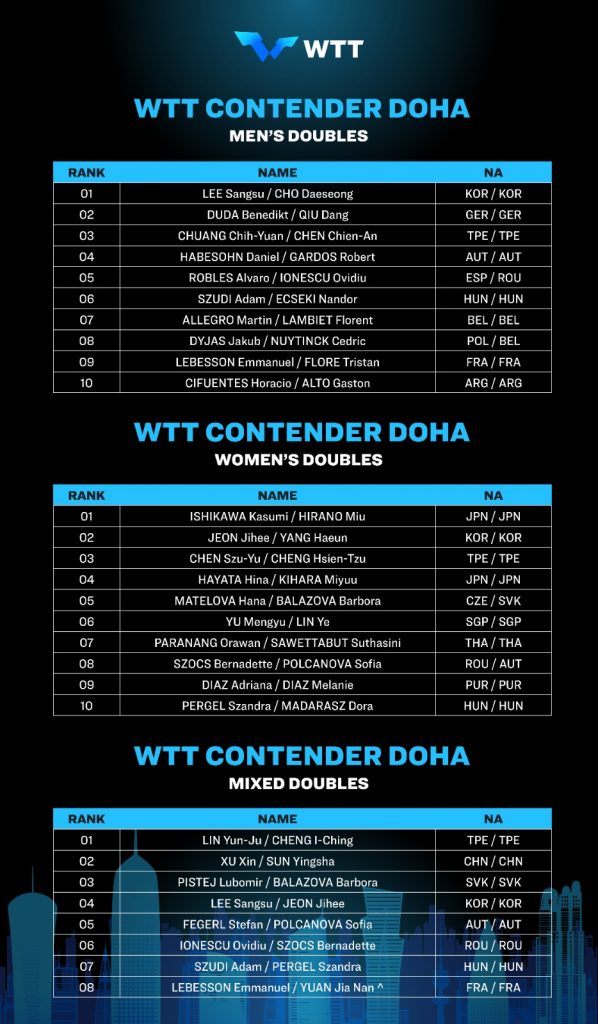 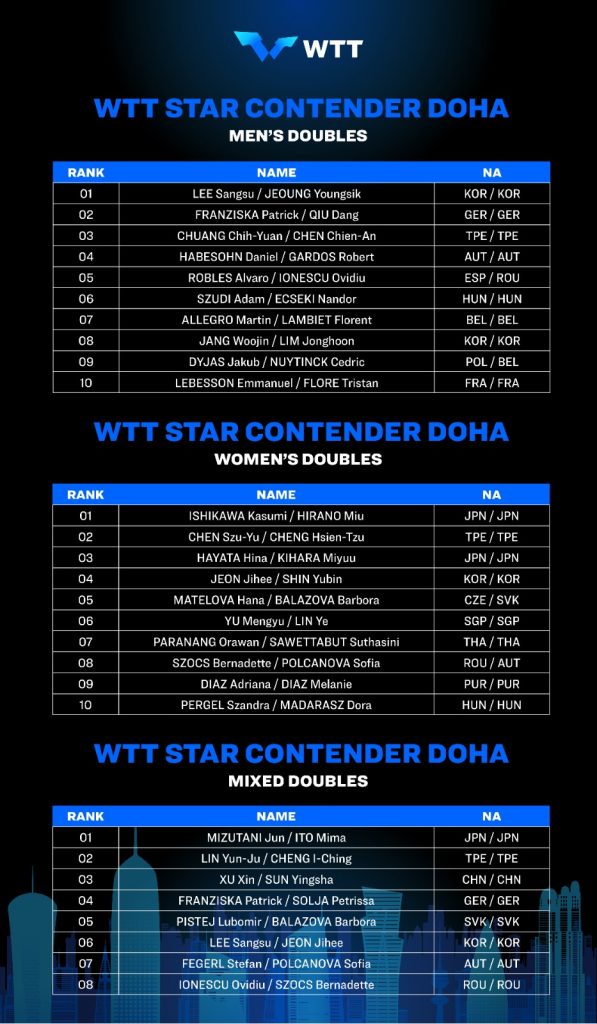 Player safety is at the forefront of all WTT events and strict COVID-19 measures will be implemented at the Middle East Hub in view of the ongoing pandemic.

Click here for more information about WTT events and the Middle East Hub.