In a historic moment for World Table Tennis, Grand Smash events will sit at the top of the new Table Tennis World Rankings after the ITTF Executive Committee approved a new rankings structure for table tennis in 2021.

In a historic moment for World Table Tennis, Grand Smash events will sit at the top of the new Table Tennis World Rankings after the ITTF Executive Committee approved a new rankings structure for table tennis in 2021.

The new Table Tennis World Rankings will play a crucial role in bringing WTT events to life while acknowledging the tradition and importance of ITTF events.

Grand Smashes will join the ITTF World Championships and the Olympic Games as the three events at the top of the rankings pyramid and will each award 2000 points for the winners.

With up to four Grand Smashes planned each year, performance at these events will become the most critical in determining a player’s Table Tennis World Ranking.

“The Grand Smashes are the cornerstone of what we promised we would deliver for table tennis. This is a momentous occasion for WTT and the sport, as the ratification of the new Table Tennis World Rankings lays the foundation for these events to become the future of the sport for our elite athletes and entertain our fans for decades to come.” – Liu Guoliang, WTT Council Chair

“Grand Smashes as our marquee events will unlock the potential of table tennis and help further grow the industry of the sport. It will have a tremendous impact on the overall development of table tennis worldwide, ultimately bringing benefit to all stakeholders, not just our players and fans, but to our member associations as well.” – Steve Dainton, WTT Director and ITTF CEO

Grand Smashes will debut in 2021 and grow into the pinnacle of Table Tennis. Since the announcement of our Grand Smash initiative, marquee cities around the world have shown their interest in securing the long-term hosting contracts. Announcements of the inaugural two Grand Smash cities for 2021 will be made shortly.

The new ranking structure has been established to create a fairer, progressive and more dynamic system that will contribute to greater fluctuation for players, while making it clearer for fans, media broadcasters and sponsors to understand where each event fits and allow WTT to tell the story of each season.

The full Table Tennis World Ranking points for event champions is as follows: 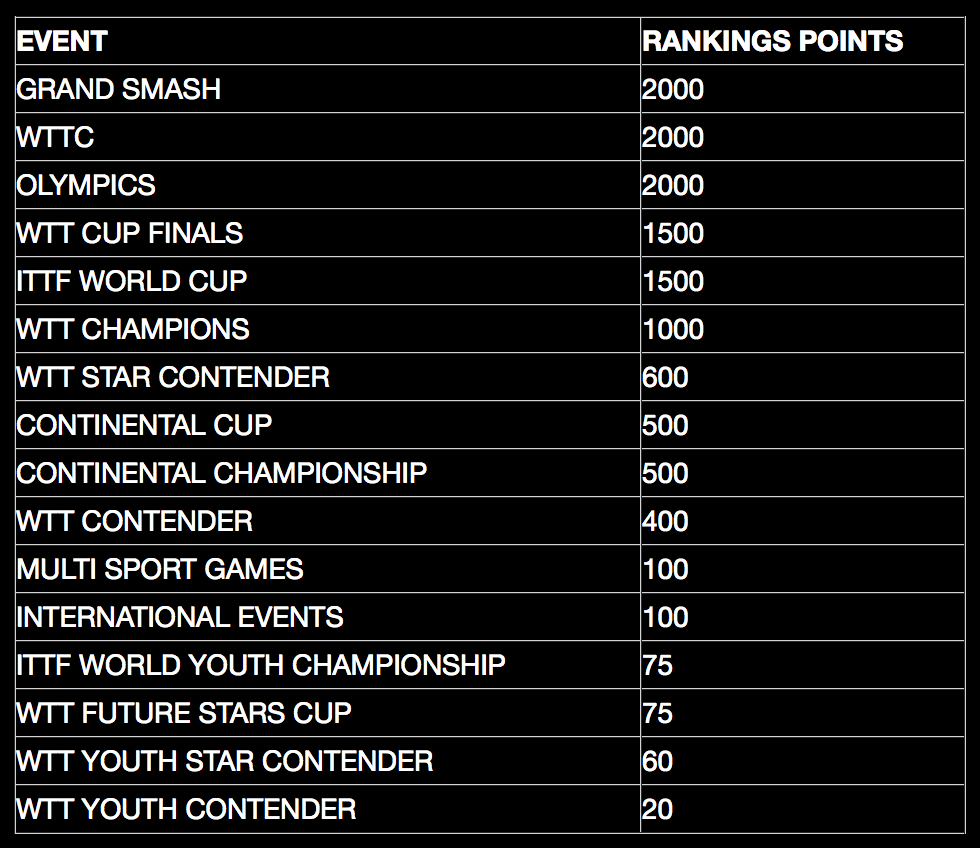 The structure also re-establishes the pathway from Youth to Senior with Table Tennis World rankings points offered for players participating in the U/19 age category of the WTT Youth Series and ensuring that the WTT journey for players is clearly mapped out from day one of their playing career.

Separate WTT Youth Series rankings will be announced in early 2021.

The proposal also introduces a number of new rankings initiatives to reinforce the ITTF and WTT’s desire to present a more player and fan friendly structure.

The full 2021 rankings structure, points allocations and final regulations will be published on the ITTF website commencing 29 December 2020.