Player safety at the forefront of #RESTART

Bringing about the much-anticipated return of international table tennis, the #RESTART series offers fans the opportunity to see their favourite stars meeting in fierce rivalry once again. However, all of this is only made possible thanks to months of hard work and planning behind the scenes.

Following in-depth consultations with experts, the International Table Tennis Federation (ITTF) compiled a list of effective measures to ensure a COVID secure environment for all parties involved in bringing the action to life, leaving players feeling safe and secure throughout their stay in China. 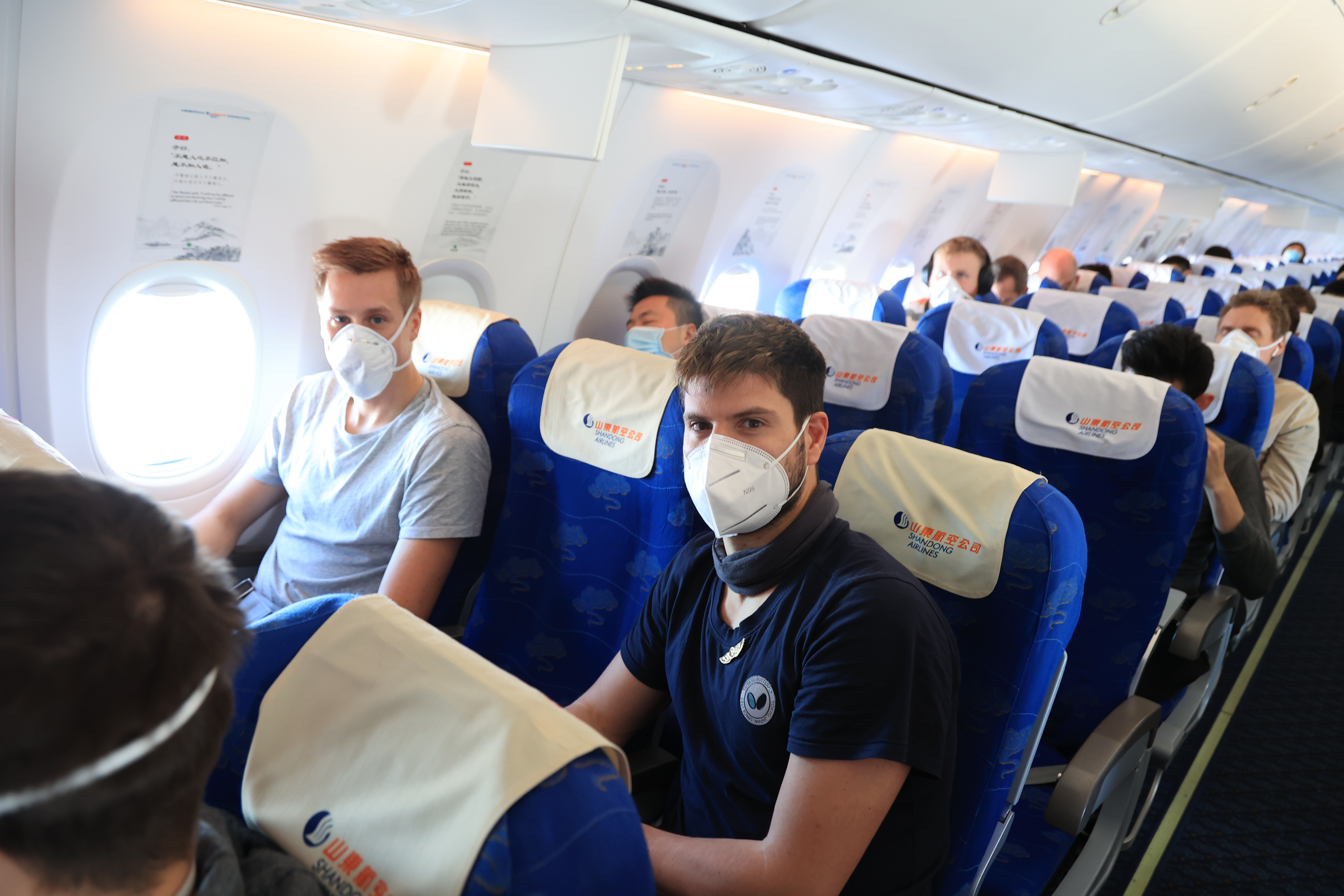 Putting the safety of all involved with #RESTART atop the list of priorities, strict guidelines were put in place to ensure the smoothest possible journey, from different locations all over the world, to the playing facilities in China.

Required to return a negative COVID-19 test result up to three days prior to departure, upwards of 170 people, including players, coaches, officials and staff arrived at Shanghai Pudong International Airport two weeks in advance of the #RESTART series, allowing sufficient time for China’s mandatory isolation requirements.

Upon arrival at the airport, all passengers were then required to undergo a further test before being directed to the Gleetour Hotel Shanghai where three days of isolation were spent. All guests submitted a further test on day three with those returning negative results given the green light to make the journey to Weihai, the destination of the Dishang 2020 ITTF Women’s and Men’s World Cups.

Transportation to Weihai, the home of the 2020 ITTF World Cups

All players were provided with COVID secure transportation from Shanghai to Weihai, allowing for full isolation from external parties throughout the journey. Everyone making the trip received VIP treatment, including a fully catered experience. 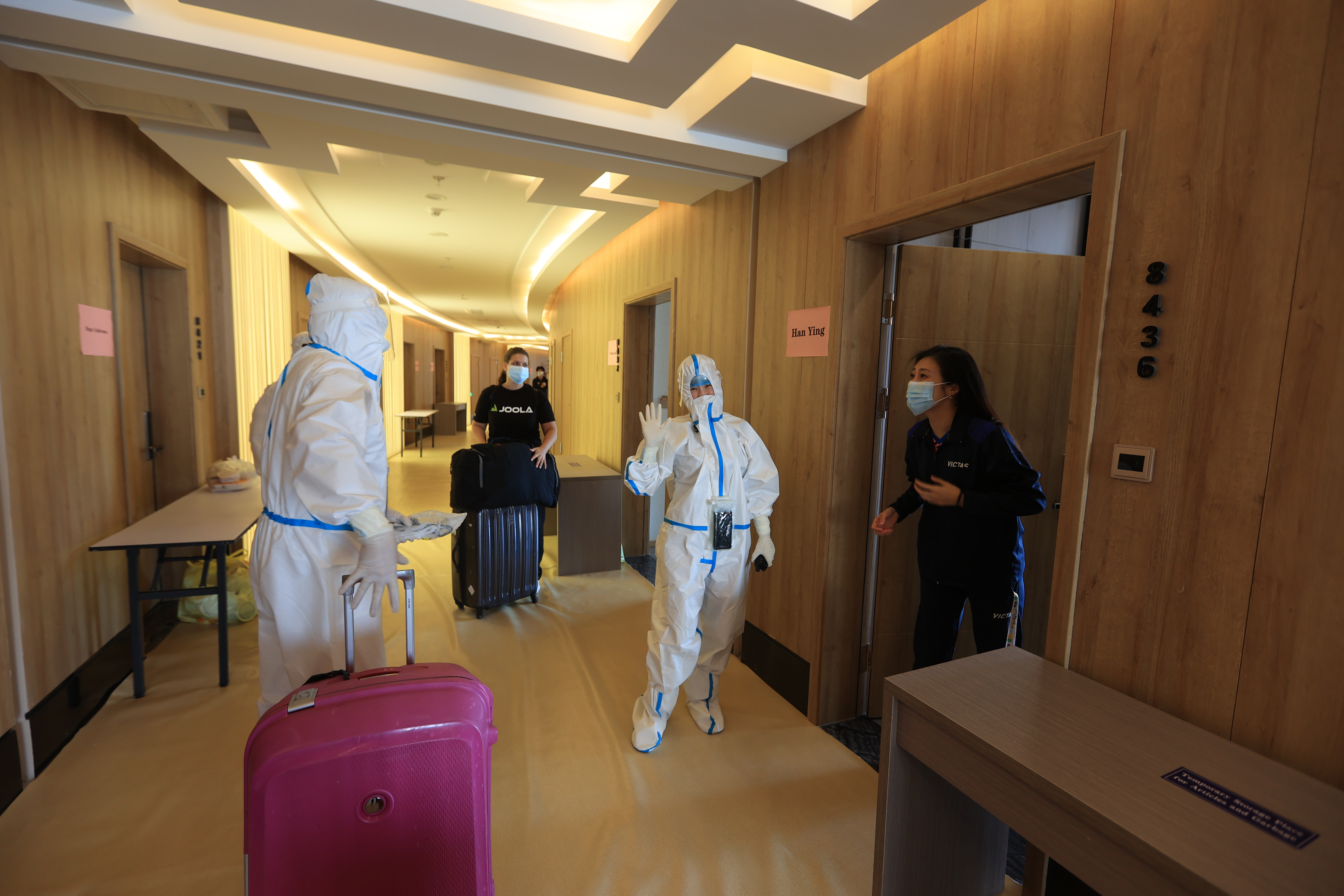 Mandatory tests were carried out on the day of arrival in Weihai, where everyone would serve the remainder of their quarantine restrictions at the hotel facility attached to the Weihai Nanhai Olympic Center, the designated venue for the launch of #RESTART.

Cleared to leave their rooms upon successful completion of the isolation period, players were escorted to the training hall by epidemic prevention experts to ensure full safety. Each player had two training sessions per day, with each session lasting three hours.

Entering a contained training environment walled off from the outside world, players were paired up in groups of up to eight with those who either shared the same flight or hailed from the same national association. In situations where this was not possible to accommodate, some players including Germany’s Han Ying, benefitted from the presence of a training robot to avoid missing out on crucial event preparation. 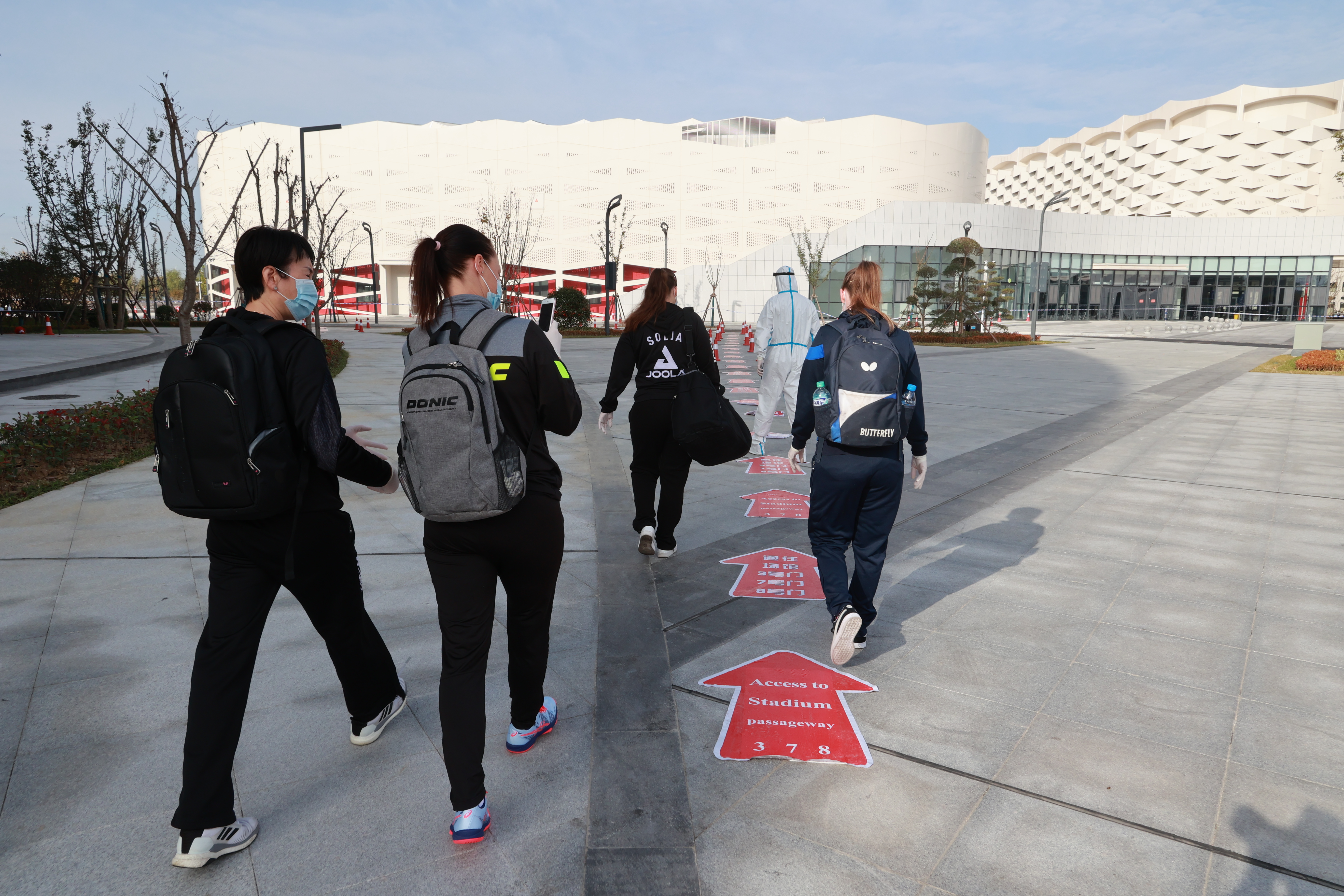 With the greatest possible care being taken to minimise risk, mask wearing at all time was a mandatory requirement for anyone leaving their hotel room. In addition, the entire playing hall, all rooms and equipment were sprayed with disinfectant on a daily basis, while the use of a special robot emitting UV light over a 360 degree radius was also put into operation at venue and official hotel.

Travelling to Zhengzhou for the 2020 ITTF Finals

Following the conclusion of play in Weihai, players travelled to Zhengzhou for the Bank of Communications 2020 ITTF Finals. The OC was able to secure high level services for players, accompanying members, ITTF officials and staff as well as CTTA staff to travel all together, a truly unique experience where the airlines called it a “table tennis All-Star flight”. Touching down at Zhengzhou Xinzheng International Airport, everyone departing the plane was then required to submit another test before a short bus journey to the JW Marriot Hotel in Zhengzhou.

Thanks to the efforts of the OC, the hotel offers a truly contained environment for all. Upwards of five floors have been exclusively reserved for everyone involved with #RESTART, with access to special designated elevators, a fully cordoned off restaurant area away from other guests and a dedicated entrance offering transportation to the playing venue. 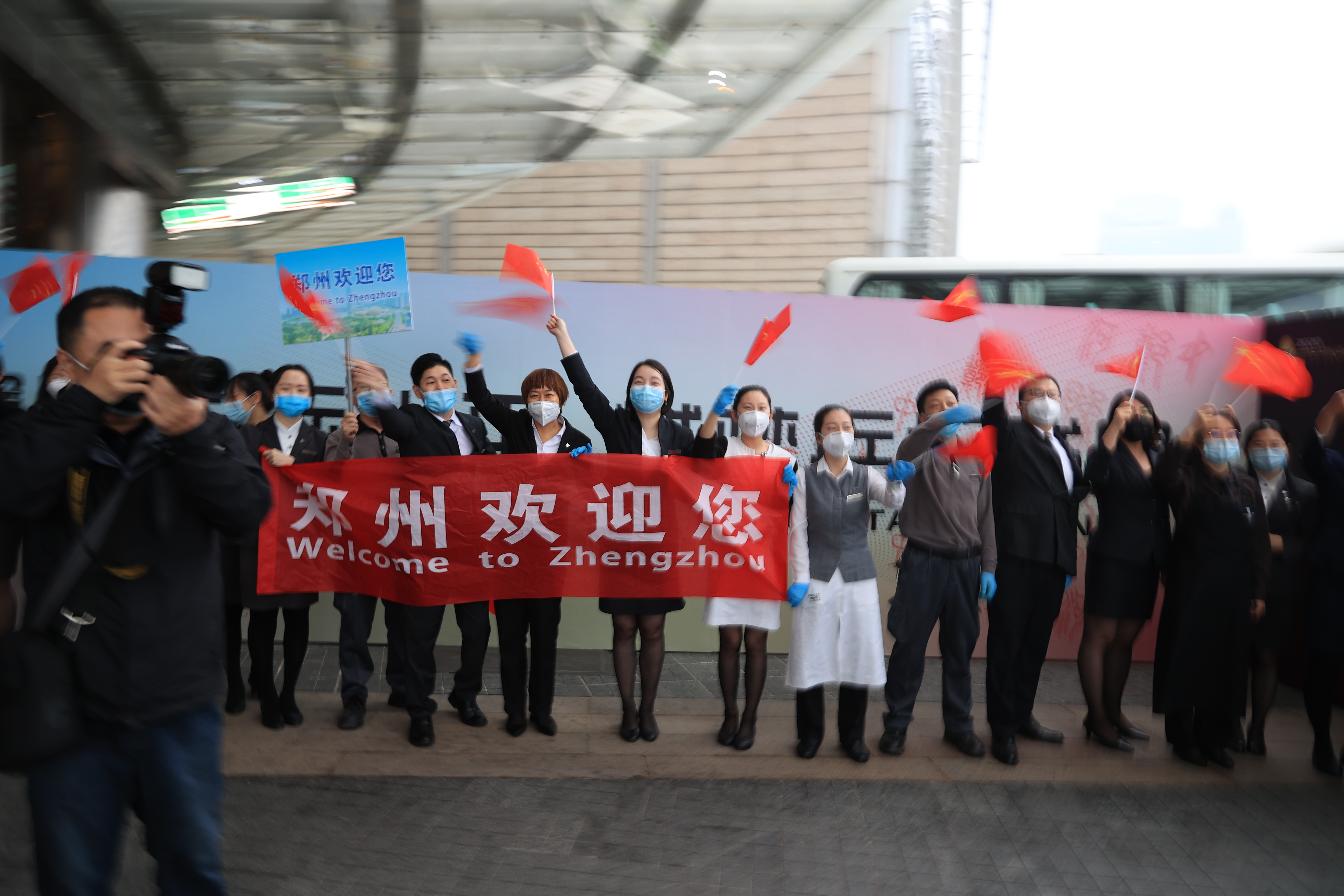 Just as was the case in Shanghai and Weihai, entrance to the playing hall is only permitted upon the return of a negative test.

This is but a small glance into the strict guidelines being closely followed to make #RESTART possible, allowing the world’s biggest table tennis stars to compete for prestigious honours, whilst promoting safety at the heart of it.

“The #RESTART series has successfully brought about the return of international table tennis through an ambitious new set of player safety guidelines in the face of the worldwide pandemic, crafting a secure environment for all participants to compete. All of this was only made possible thanks to the collective efforts put in behind the scenes by the CTTA, COC and the local organising committees in Shanghai, Weihai and Zhengzhou.” Gabor Felegyi, ITTF Competitions Director 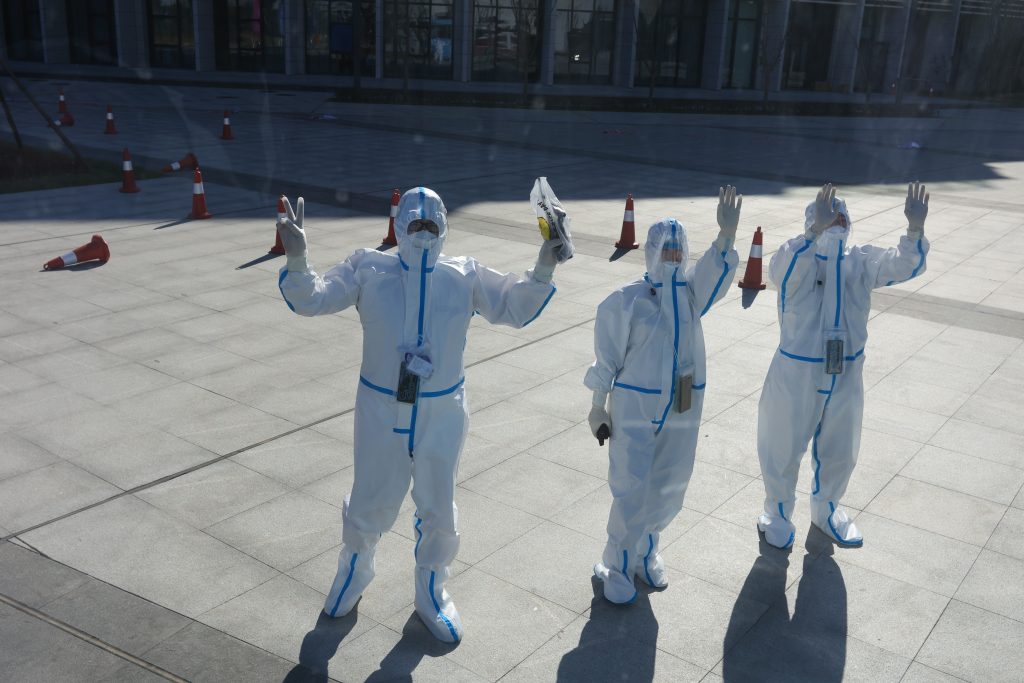 A Year of Hope