The third and final stop on the #RESTART series, the Bank of Communications 2020 ITTF Finals is taking place between 19-22 November in Zhengzhou, China.

The ITTF Finals will see 32 of the world’s best players – 16 in the men’s singles and a further 16 in the women’s singles – battle it out for glory at one of the most prestigious international table tennis events.

On Sunday 15 November, Fan Zhendong and Ma Long met in the final of the Dishang 2020 ITTF Men’s World Cup in Weihai. This Sunday, there is a chance that the legendary Chinese pair (no.1 and no.3 seeds respectively) could lock horns again in another title-decider in Zhengzhou.

Fresh off the back of clinching his third consecutive Men’s World Cup, Fan is looking to defend his men’s singles crown at the ITTF Finals, having triumphed last year in Zhengzhou. That was his second success at the event after winning in 2017 in Astana. Meanwhile, Ma Long has his sights set on what would be a sixth men’s singles title at the ITTF Finals.

Xu Xin (no.2 seed) is drawn in the same half as Ma Long. The fellow Chinese star won men’s singles gold at the ITTF Finals in 2012 and 2013. In the opening round, Xu faces Nigeria’s Quadri Aruna (no.16 seed) with a potential quarter-final in store against either Chinese Taipei’s Lin Yun-Ju (no.7 seed) or Germany’s Dimitrij Ovtcharov (no.9 seed). Lin has defeated Ovtcharov in their three most recent encounters.

Ma meets Germany’s Patrick Franziska (no.13 seed) at the first hurdle. Pass that test and the reigning World and Olympic champion would line up against the winner between France’s Simon Gauzy (no.15 seed) and Sweden’s Mattias Falck (no.8 seed). Falck famously battled with Ma at the men’s singles final of the Liebherr 2019 World Championships in Budapest, in which he won silver and became the first Swede to achieve the feat since 1997. Incidentally, Gauzy had fallen to defeat against Falck in the third round of last year’s World Championships and will be looking for revenge in Zhengzhou.

In the other half of the draw, Fan Zhendong begins his title defence against Korea Republic’s Jeoung Youngsik (no.11 seed). Lying in wait in the next round is the winner between Brazil’s Hugo Calderano (no.6 seed) and England’s Liam Pitchford (no.12 seed). Pitchford has won all three of his meetings against Calderano.

Japan’s Tomokazu Harimoto (no.4 seed) crosses paths again with Jang Woojin (no.14 seed) in what is a repeat of their third-place playoff at last week’s Men’s World Cup, in which Harimoto claimed bronze.

An all-Japanese quarter-final is possible if Harimoto and Koki Niwa (no.10 seed) both progress. In the first round, Niwa opposes China’s Lin Gaoyuan (no.5 seed), a player he has not beaten in three encounters since succeeding in the boys’ singles final at the 2011 World Junior Championships. 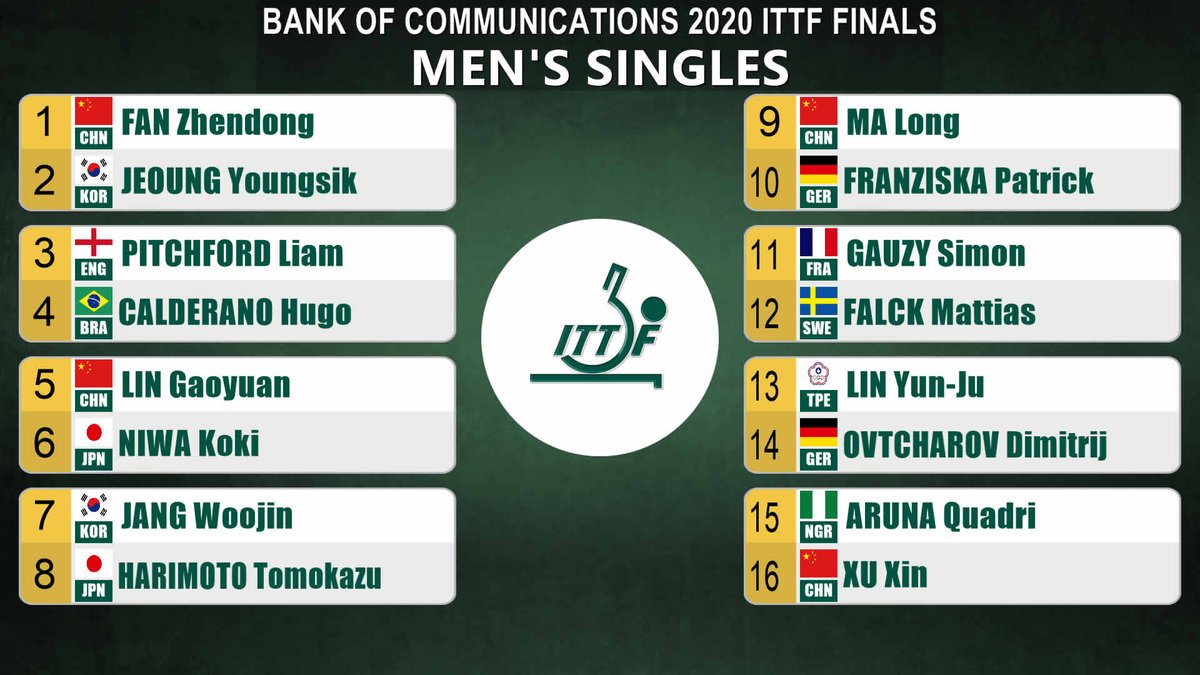 Chen Meng (no.1 seed) is aiming for her second title in less than two weeks following her gold medal showing at the Dishang 2020 ITTF Women’s World Cup. Furthermore, success in Zhengzhou would see Chen rewrite the history books. No player has ever won the ITTF Finals for four consecutive years in either the women’s singles or men’s singles competition.

Chen is drawn in the same half as Sun Yingsha (no.3 seed), her Chinese compatriot and opponent in the final in Weihai. Chen kicks off against Japan’s Miyu Kato (no.15 seed), with a possible quarter-final against Singapore’s Feng Tianwei (no.6 seed) or Germany’s Petrissa Solja (no.14 seed).

Sun starts her campaign against Korea Republic’s Jeon Jihee (no.11 seed), against whom Sun enjoys a 100% record in world ranking events. For the winner of that match, Japan’s Kasumi Ishikawa (no.7 seed), a women’s singles champion at the 2014 ITTF Finals, or Korea Republic’s Suh Hyowon (no.16 seed) will lie in wait.

Japan’s Mima Ito (no.2 seed) and China’s Wang Manyu (no.4 seed) could be set for a semi-final showing in the other half of the draw. Ito faces the challenge of an opening round clash with Hong Kong China’s Doo Hoi Kem (no.10 seed). Bronze medallist at the 2020 Women’s World Cup, Ito enters the tie as favourite, but they have each won four times across their eight meetings to date.

Wang Manyu is drawn against Japan’s Hitomi Sato (no.12 seed) in the first round, with a possible quarter-final against Chinese Taipei’s Cheng I-Ching (no.5 seed) or Puerto Rico’s Adriana Diaz (no.13 seed), a debutant at the ITTF Finals. In their only previous match, it was Cheng who prevailed at the 2015 World Championships. Meanwhile, Austria’s Sofia Polcanova (no.9 seed) takes on China’s Wang Yidi (no.8 seed) in a first-ever encounter between the pair. 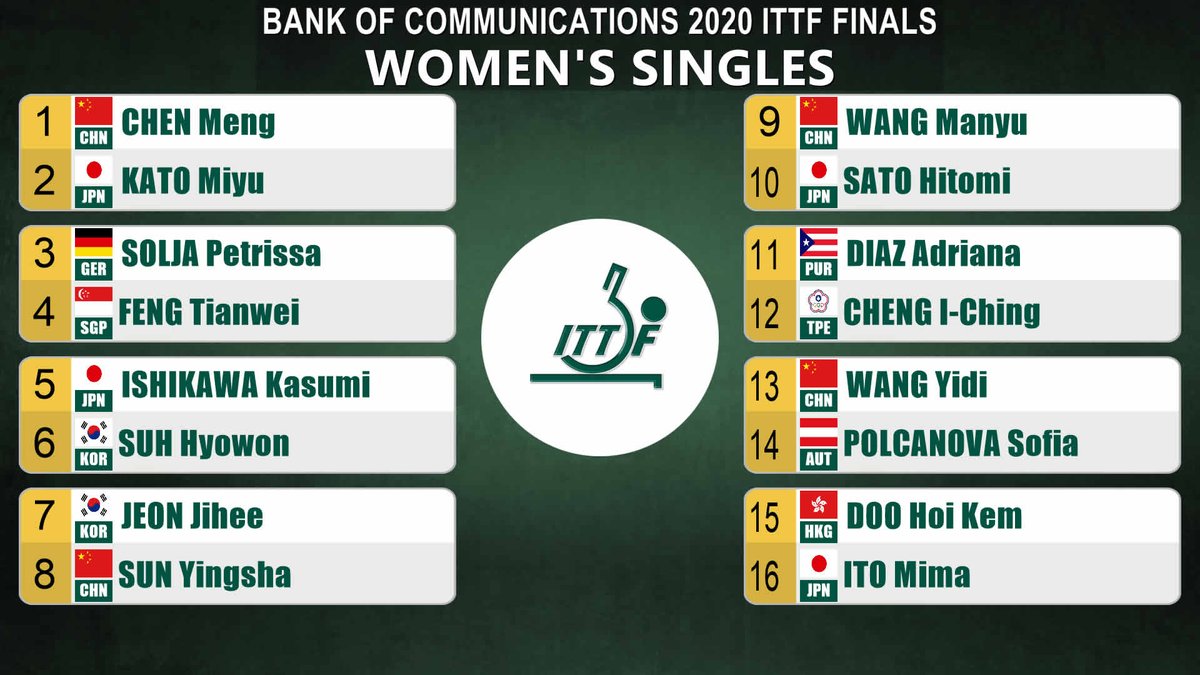