Focus on knowledge and the sharing of experiences was a key theme in September, not only through the ITTF’s six video conferences leading up to the first virtual Annual General Meeting (AGM) on 28th September, but also via the International Federations (IFs) Gender Equality Webinar series, held online on 7th, 14th and 23rd September in lieu of the IOC’s (International Olympic Committee) annual Gender Equality forum. 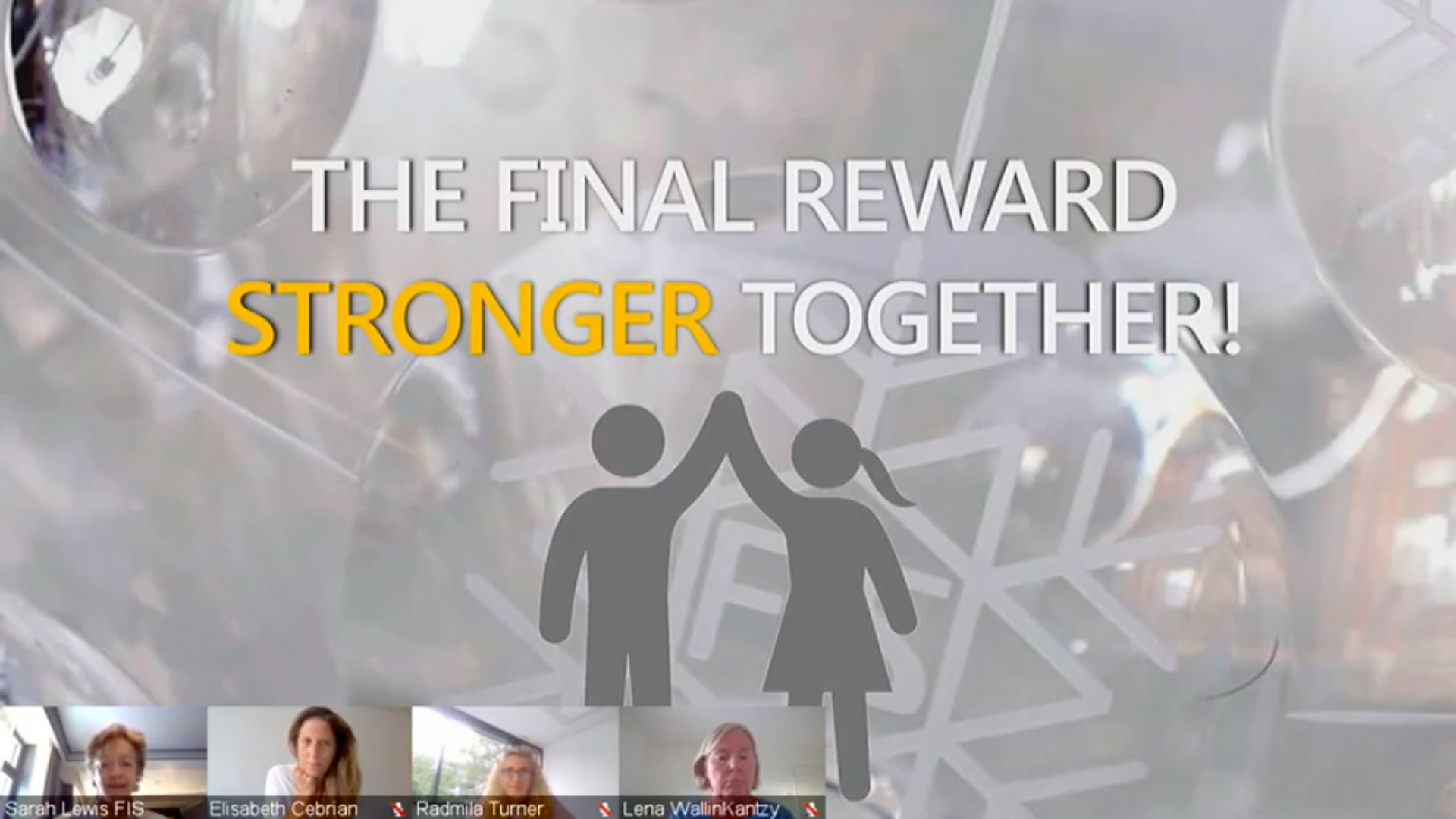 Continuing its efforts to close the gender gap in female participation in sport on and off the field of play, the IOC shifted its plans for the 5th IF Gender Equality Forum, initially scheduled for April 2020, replacing the event with six online webinars open to International as well as National Federations and National Olympic Committees.

The main objectives of the webinar series was to share examples of concrete initiatives and toolkits that can be adapted and implemented by IFs, but also to inspire and encourage IFs in particular to embrace change and develop action plans to address Gender Equality in sport, while supporting IFs to reach the 30% target for female representation in their governing bodies. Each of the sessions was enriched with attendance of representatives from various IFs presenting their best practices from the field, presenting a collection of interesting case studies. Participants had the opportunity to ask questions and connect with like-minded individuals working to advance gender equality in sport.

Each case study was welcomed by the audience and sparked great discussions.

“I encourage you to participate with an open mind and take time to reflect on how you can have a positive impact on Gender Equality in your organisation. I want to be very clear. Sport organisations need women in power in order to be balanced and therefore to have balanced decisions. Together, we can achieve our common goal of gender equality in sport.”

A series of six online webinars began with the first two, which are intended to increase female representation in governing bodies and improve women’s representation in decision-making positions. It is still a common challenge for many organisations on an international and national level to have a higher number of female leaders.

The first webinar session, exploring the topic “Entrenching Gender Equality in Electoral Processes” was enhanced by the attendance of two panellists, presenting case studies of International Federations that have successfully implemented gender equality in their policies and statutes.

Stephanie Hightower, Gender Leadership Taskforce Chair at World Athletics, recounted the development and implementation of the “Time for Change” initiative, which led to an increase of gender targets in the World Athletics constitution in order to achieve gender-equal representation by 2027.

FIS (International Ski Federation) Secretary General Sarah Lewis presented how the organisation introduced gender-balance targets for its committees, highlighting how workshops can strengthen and empower emerging female leaders and create a network for like-minded women within the organisation. The progress that has been made is also thanks to the Gender Equity Working Group appointed by FIS in 2018 to address gender balance, review FIS policies, regulations and rules, and propose areas where promotion of gender equity should take place.

Ms. Lewis strongly highlighted the importance of the support that FIS is providing to National Ski Associations towards their initiatives and events. However, as she noted:

“They have to show that they are taking initiative. The more effort they put in, the more support they are going to get.”

Ms. Lewis also advised NAs (National Associations) to look for resources which are available through national governments and institutions working towards Gender Equality.

The other guests to feature were Elisabeth Cebrian-Scheurer, Head of Women in Basketball and Special Projects at FIBA (International Basketball Federation), and Radmila Turner, the IF’s Head of National Federations and Sport, as well as Youth and Anti-Doping for Europe. Their presentation focused on the “Time-Out Europe Career Transition Programme”. The initiative is a leadership and business programme focused on integrating elite basketball players, who are mostly at the end of their sporting career, into the job market. The opportunity has been offered to one female and one male participant from each member federation in Europe. The programme aims to support elite athletes through opportunity for education and training, in order to open new opportunities and pathways in the lives of players who would like to remain in basketball after retirement.

The third and fourth sessions identified two important target groups in sport in the field: coaches and match officials. The truth is that usually the higher the competition level, the fewer female coaches are present.

The first guest of the “Developing the pool of female coaches” session, Sheilagh Croxon, spoke on behalf of the Commonwealth Games Federations. She was appointed to run the Women’s Coach Internship Programme which was held on the occasion of the Gold Coast 2018 Commonwealth Games. The concept of the program was to keep 20-30 additional quota spots, which were made available specifically for developing female coaches, providing real game time and coaching exposure on the international level.

The next speaker was Katie Sadleir, General Manager of Women’s Rugby at World Rugby, who explained their strategy to grow the pool of women coaches, particularly at high performance level through comprehensive solutions aiming to promote diversity in coaching. These solutions focused on 10 recommendations, which include a database of coaches, a partnership with NFs, and various programmes they introduced. The milestone was the production of the global transformation strategy to Accelerate the Global Development of Women In Rugby with five main pillars: Participation, Performance, Profile, Investment and Leadership.

The fourth session “Developing the pool of female technical officials” opened with the presentation of Morgane Gaultier speaking on behalf of the International Cycling Union (UCI).

Ms. Gaultier emphasised the main objectives of their strategy in order to increase female match officials, setting up quotas for courses, quotas for National Federations to participate in the training of International Match Officials, and specific courses for women.

Sharon Springer, Senior Educational Manager from the Badminton World Federation (BWF) presented strategies the organisation has set up, which highlight the importance of visual representation following the motto “if you can see it, you can be it”. The presentation also touched on the importance of collaboration with Continental Confederations and Member Associations, Gender Equity Grants which are available for each continent, the involvement of women in the Assessor’s Panel, and a Mentorship Programme.

Initiated by Nadya Bonjour, co-author of the IOC Portrayal Guidance, the fifth session highlighted the importance of language use and images chosen when presenting women in sport, and its influences on our perception of others. The IOC has realised that there has been a lack of representation and diversity when it comes to women in sport, meaning more work has to be done in cooperation with stakeholders, including the media, on meaningful change in this matter.

Barbara Slater, Director of Sport at the BBC (British Broadcasting Corporation), member of the IOC Women’s in Sport Commission and the IOC Press Committee, shared the lessons the BBC has learnt in increasing its commitment towards women’s sport. An important step taken was to run its #ChangeTheGame campaign, ensuring that the BBC challenged some of the perceptions held surrounding women’s sport and break stereotypes. Another one is the new policy in relation to the BBC’s social media platforms which serve to be a place for respectful discussions, constructive criticism, debate and opinion.

In addition, their take away from recent experience is the importance of working in conjunction with governing bodies on gender portrayal.

The next guest was Katrina Adams, Chair of the International Tennis Federation’s (ITF) Gender Equality in Tennis Committee. She highlighted ITF’s Advantage All Gender Equality Strategy which is built on five pillars: Empower, Balance, Culture, Value and Voice. She explained what actions ITF is taking to achieve the main aim of growing value, which is to raise the commercial appeal of the women’s game and aim towards growing its voice, including raising awareness and managing the media’s image of women’s tennis.

“Developing policies and procedures” was the topic for the sixth and final session, featuring presentations on the role of investigations and case management in safeguarding athletes from harassment and abuse in sport. The two presenters were Ingrid Beutler, founder of Beutler International Sports Advisory, and Harvard Ovregard, Senior Advisor at the Norway Olympic and Paralympic Committee, Federation of Sports and Confederation of Sport.

Beutler focused specifically on investigations, breaking the topic down in three stages: the ethical imperative to investigate wrongdoing, intelligence gathering, and the investigation itself. The ethical imperatives serve to protect victims, prosecute wrongdoing and reduce harm. She also emphasised the necessity of having a safeguarding policy. In regard to intelligence gatherings, Beutler also highlighted the importance of reporting mechanisms in sport and their principles: protection, confidentiality, commitment, trustworthiness and impartiality.

Ovregard’s presentation on case management opened with a quote: “Intentions and policies might be good, but what defines you is how you treat people”. This was supported by the Guideline to Prevent Sexual Harassment and Abuse in Sport. The main factors influencing case management are: policies in the organisation, rules defining unwanted actions, education in policies and rules, procedures for case management and help and advice in case management. Ovregard stated:

Despite the fact that we were unable to meet in person for this year’s IFs Gender Equality Forum, and in spite of the world of sport having been quite heavily impacted by the global crisis, it was an outstanding opportunity for International Federations and National Federations to “e-meet” and share best practices which have certainly stimulated new ideas and initiatives towards gender balance within sports organisations.

2022 With The Future In Mind scholarship holders announced