Six years ago, on Sunday 28th September, 2014, Portugal and Germany were crowned respective men's and women's champions at the European Team Championships held in Lisbon.

Join us as we look back at the 2014 European Championships team event finals.

There are fewer victories sweeter than the ones at home, as Portugal found out when they defeated top seeds Germany in the European Team Championships final, held in Lisbon. By contrast, it was a tournament to forget for the German men’s team as little turned out in their favour.

Prior to the final, all three pillars of the German roster had various issues: Patrick Franziska had damaged his ankle in the earlier rounds and could not continue, while then Dimitrij Ovtcharov needed to have his wisdom tooth removed during the tournament. Even Timo Boll was not in the best of fitness or form.

However, while playing at the famous Meo Arena, it came down to the performances of the Portuguese poster boy, Marcos Freitas who won the decisive match against arguably Germany’s finest player in Timo Boll. The combined effort of Freitas and his teammates, Tiago Apolónia and João Monteiro denied Germany what would have been a seventh consecutive men’s team title.

Starting things off was the Madeiran himself, as Marcos Freitas took on Steffen Mengel, winning the contest in straight games (11-8, 11-8, 11-8). The Germans formed a swift response, as Timo Boll saw off the challenge of João Monteiro in the same fashion (11-7, 11-1, 11-8).

The third match proved to be critical in changing the direction of the match, as Tiago Apolónia managed to break through the tough defence of Dimitrij Ovtcharov, European no.1 at the time, in a strong 3-1 (11-7, 11-2, 11-13, 11-9) win – handing Portugal the lead, and his compatriot Freitas a job to finish.

The ‘Freight Train’ was in full motion against Boll in what proved to be the victory clincher, as Freitas steamrolled to a 3-1 (12-10, 5-11, 11-6, 11-9) win, bringing the crowd to its feet and tears of joy, as his home nation celebrated glory like never before.

Engaged in a typical final where the score did not tell the full story against Austria, Germany emerged 3-0 overall winners, following a tense and difficult final. 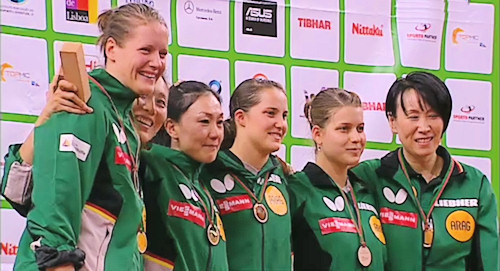 The first two matches put that evidence on display with Shan Xiaona and Han Ying both needing a full set of five games to see off their respective opponents, Sofia Polcanova and Liu Jia.

Finally, it came down to Petrissa Solja to complete the task, meeting Austrian counterpart in Li Qiangbing. Winning 3-0 (11-4, 11-3, 11-9), Solja secured the crown for Germany in style, knowing full well the final could have turned on it’s head at any moment during the first two matches. Success on her European Championships debut for Jie Schöpp, who had just been appointed women’s team coach:

“First match between Shan and Polcanova was very important for us. Both players were very nervous, but Shan played at a top level. In the second, Han found herself in a new situation at this tournament. She lost two games! Liu played very well today. Solja gave another solid performance. Our team proved they are in top shape. Throughout the tournament they were at the top of the game.”Jie Schöpp, Germany women’s team coach