2021 marks the dawn of an exciting new era for our sport as World Table Tennis (WTT) brings its keenly awaited, cutting-edge events to life!

In light of the persisting COVID-19 pandemic, WTT is organising its inaugural event calendar in the best possible way to overcome the challenges that continue to face the sports industry and the world at large. 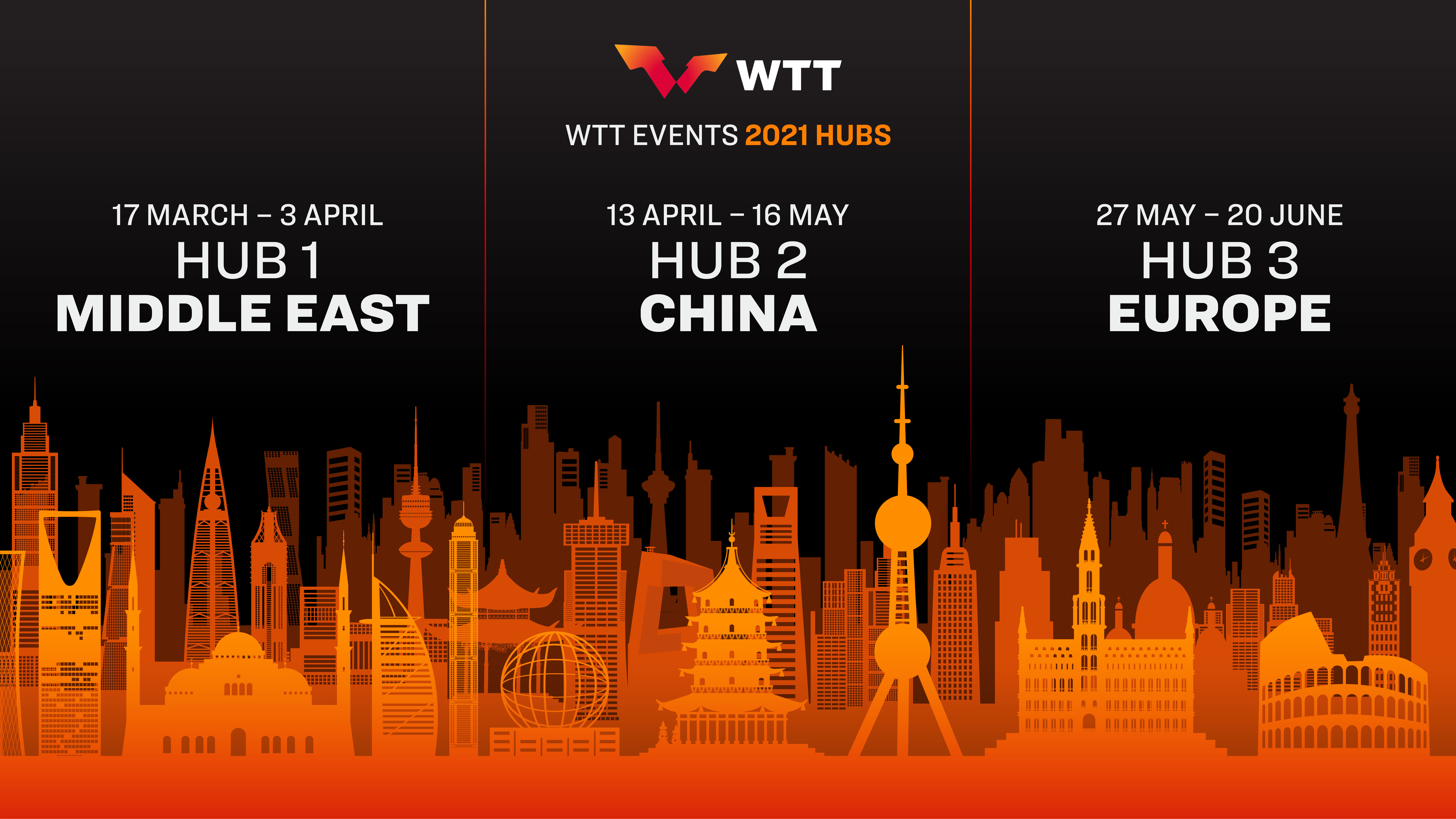 The first half of the 2021 WTT calendar will adopt the pragmatic approach of grouping events in three separate “Hubs” to be staged in Middle East, China and Europe:

The Hubs will showcase the new WTT event structure and the China Hub will feature the very first Grand Smash, the top tier in professional table tennis.

The WTT Champions Series will also see players battling it out for lucrative prize money and all-important points in their bid to reach the WTT Cup Finals, two separate end-of-year showpiece events contested by the top men’s and women’s players.

The Hubs in Middle East and Europe will focus on WTT Contender Series events, which provide the perfect setting for up-and-coming stars to test themselves against some of the world’s leading athletes.

The proposed Hub format will create the best possible environment for WTT events to be held, ensure better logistics for meeting COVID-19 health and safety guidelines and a manageable travel schedule for players, while the representation of three different regions reflects the globality of WTT.

Furthermore, the journey from continent to continent in structured time-blocks will help to tell the story of the WTT season, making it more compelling for the fans and a captive global audience to follow and engage with.

“Despite the difficulties caused by COVID-19, WTT is being proactive to ensure that international table tennis events are able to take place in 2021, acknowledging that this first calendar year will act as a stepping-stone towards a full event schedule, to be implemented in subsequent years.

“2021 is a landmark year for the sport and we remain committed to offering our fans, both old and new, the opportunity to watch world-class table tennis that is refreshed, re-energised and redefined.” – Stephen Duckitt, WTT Event Strategy Director

Following the three Hubs in Middle East, China and Europe, the WTT calendar will take a break to accommodate the rescheduled Tokyo Olympic Games to be held between 23rd July and 8th August 2021. The break will provide the opportunity for players to train and prepare for a tilt at becoming Olympic Champions.

After the Olympic Games, WTT intends to return to a modified calendar of events that reflects its desired event calendar and discussions with host bid candidates are continuing. WTT will continue to be guided by government and medical advice around the COVID-19 pandemic before making further announcements.

BE A PART OF THE JOURNEY!

Bidding is open for cities, countries, promoters, national associations or organisations interested in hosting the events scheduled for the Hubs in Middle East, China and Europe.

WTT also welcomes applications to host events after the Olympic Games in 2021 or to become part of the full WTT event structure in 2022.

Please note that WTT reserves the right to change the event schedule.