After two days of action at the ARAG Centre; on Tuesday 2nd June, Timo Boll won the Düsseldorf Masters.

The was win somewhat as anticipated, listed at no.10 on the most recently published men’s world rankings, the now 39 year old was the highest rated player in action.

“It was a good final, Menzi put up a lot of resistance. There was a good level and some really top class rallies. I really had to work hard to bring the game home. I’m really very happy with the first competition in a long time.” Timo Boll

A most worthy final adversary; one that underlines the current German strength in depth. A no.140 world ranking belies the quality of Steffen Mengel; more than once he has been called to national team duty when injury has hit.

“Timo played well, I think the match was nice to watch. All in all I had my chance in the first game when Timo was down and changed hands. There were one or two points that could have been mine. In the end Timo played really strong and deserved to win.” Steffen Mengel 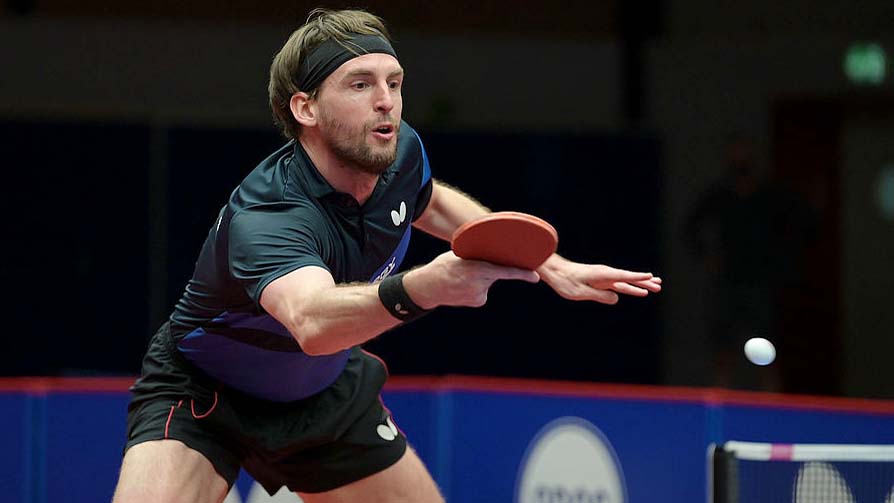 Organised by the Borussia Düsseldorf Table Tennis Club in conjunction with the German Table Tennis Association (DTTB), it was success for Timo Boll and in an impressive return to competitive action.

He progressed without ever being extended the full five games distance; an opening round win against 19 year old Kirill Fadeev (11-4, 11-5, 11-7) wiped off the cobwebs.

“It was a strange feeling to play a competition like this, without spectators, without atmosphere. But I am glad that Borussia and the DTTB created the chance to get real match practice again. I am satisfied with my performance.” Timo Boll

Imposing in his opening contest, in his quarter-final encounter facing Anton Källberg, life was more testing, the outcome, the loss of the opening game before asserting himself on proceedings (11-5, 7-11, 11-5, 11-9)

“My last match I played was on my birthday in a league match against Ochsenhausen. So it’s quite different whether you play a training match or the tournament now; it puts you under stress in a completely different way. Therefore we are all very happy that we can finally play a match again. I’m in the semi-finals after a good duel with Anton, but I also saw what I still have to work on.” Timo Boll

A four games win against one Swedish colleague, it was the same in opposition to another. He beat Kristian Karlsson (11-4, 6-11, 11-5, 11-6) to reserve his place in the final against the quickly in form Steffen Mengel.


Closest match of all

“I definitely played very well. It was difficult for both of us: We both know each other very well and also train together a lot. There is little to hide, which plays into my cards, because he’s actually a little better.” Qiu Dang

Naturally disappointed with the defeat by Dimitrij Ovtcharov is a seasond player and kept matters in perspective.

“In any case, it was a close and good match. I didn’t start so well into the match. I’m still lacking my usual rhythm in a competition, but there is still enough time left to get into shape. These competitions are definitely good for me, to improve even more.” Dimitrij Ovtcharov

Overall a successful endeavour, one which after the opening day of play met with the approval of Jörg Rosskopf, the national coach.

“Of course it is not so easy for the players without spectators but they have to get used to it in this tournament. They were good matches. The players have been quite hot. I’m happy with this first day and I think the players are.” Jörg Rosskopf

It is proposed to hold the tournament each week until August when an event comprising eight players will be staged; in June the matches will be played on Mondays and Tuesdays but in July is subject to change.

After the first edition Timo Boll leads the overall standings with 50 points. Steffen Mengel is in second place with 30 points; semi-finalists Qiu Dang and Kristian Karlsson each receive 20 points, for the quarter-finalists it is 10 points, five points for first round losers.