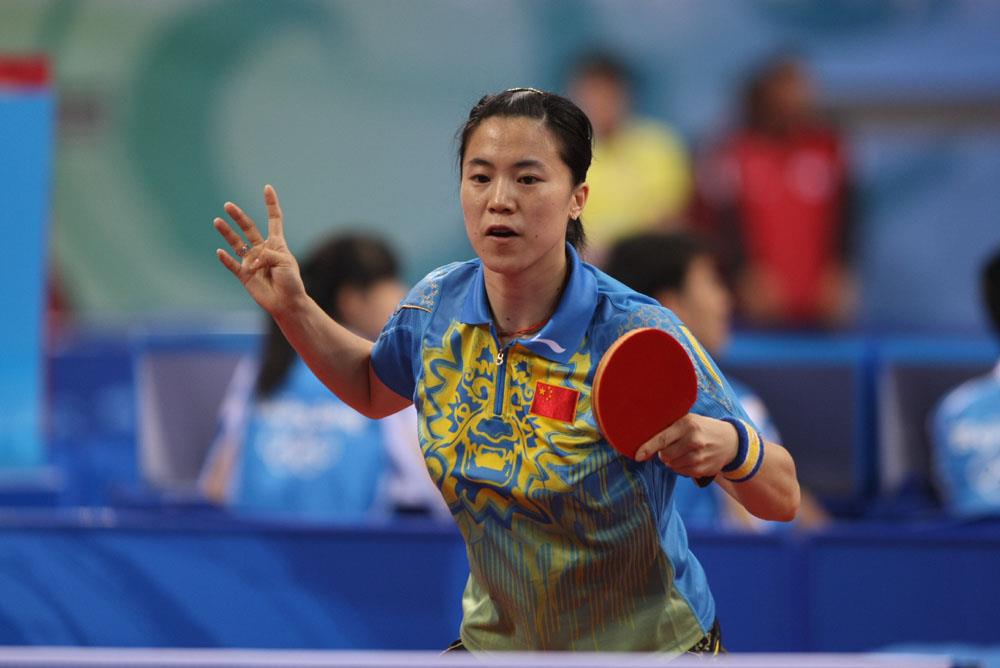 14-year-old Guo Yue made some new fans today in Paris, after her brave effort against Chinese compatriot Wang Nan ended in defeat.

The veteran of many championships was clearly surprised by the pace and strength of the teenager, so much so that Wang lost the opening game to Guo. It was eventually, to be in vain, as Wang wrapped up a clinical 4-2 (8-11, 11-4, 11-8, 11-3, 8-11, 11-2) win but at no point during the match did it look to be a certainty – and for that the credit must go to Guo’s fighting spirit.

The Greece international Kreanga pulled out all his defensive tricks to eliminate the 1997 World Championship runner-up, despite losing the first game of the contest! Kreanga eventually turned the tables from the fifth game onwards and never let the pressure subside, and make his way to the quarter-finals.

What a crazy start to proceedings we have had today! After the upsets in men’s singles, there is a major one to note in the women’s as Ai Fukuhara was eliminated by the upcoming star Daniela Dodean!

The 19-year-old Romanian star Dodean cruised through her match against the Singaporean leading lady, winning 4-0 (12-10, 11-9, 11-8, 11-9). It was a remarkable show of force by Dodean which kept the usually fast on the return Fukuhara on the backfoot. How far will this youngster go??

Exciting stuff from the first round! (2007 Zagreb)

The world Championships here in Zagreb have kicked off in much style and poise, as we just experienced a seven-game thriller between Kenta Matsudaira and Chu Yan Leung!

A youngster from Japan, Matsudaira showcased his tomhawk service for everyone to enjoy but it caused much problems to the double Olympian from Hong Kong China, Leung! After Matsudaira took the first game, it was evident this would not be a short match – and it went on late into the seventh game to decide the winner. Leung’s experience came to play as he clinched a 4-3 (7-11, 11-9, 13-11, 11-8, 10-12, 5-11, 11-4) win, but Matsudaira should be proud of his exploits – something we must get used to seeing in the future!

This means that Gatien is now the first Frenchman ever to win the title, and this sees three different World champions being crowned in three years – after Jan Ove-Waldner won in 1989, John Persson in 1991 and now Gatien in 1993 – all three Europeans!

Tight start in the final (1993 Gothenburg)

For Saive, the second game was clearly a sign of his strength on the table and that he is not out of this just yet. Winning that game 21-17, the Belgian pushed Gatien back with a set of stunning back hands… Who claims the gold??

It’s time for the most awaited game of the day here in Gothenburg, as Jean-Philippe Gatien takes on Jean-Michel Saive in the men’s singles’ final of the World Championships.

Having seen off Jan-Ove Waldner in the semi-finals, Belgian Saive will be hoping to claim his second title. He will of course, find it tough against Frenchman Gatien who himself saw off Zoran Primorac in the other semi-final.

China’s two pairings in the final had already assured their country of a third consecutive World Championship, but it came in an exciting fashion. Deng and Qiao were touted to take home their second title, but it was not to be curtsy colleagues Liu and Qiao – who showed off their classy shot making to keep the former World Champions at bay.