The moment is here – Team China conclude an intense battle in the men’s team finale with a a swift 3-0 overall victory over Team Korea Republic as Ma Lin beat Lee Jungwoo in straight games to wrap up the win (11-9, 11-7, 11-7).

It was a strong and without complications match, as Ma went from point to point gaining an inch of confidence over his opponent. Lee’s best efforts to push the match into a decider in each of the three games was visible, but Ma had that covered very well. It’s another major team event win for China, and a very valiant silver medal for the first time finalists, Korea Republic! 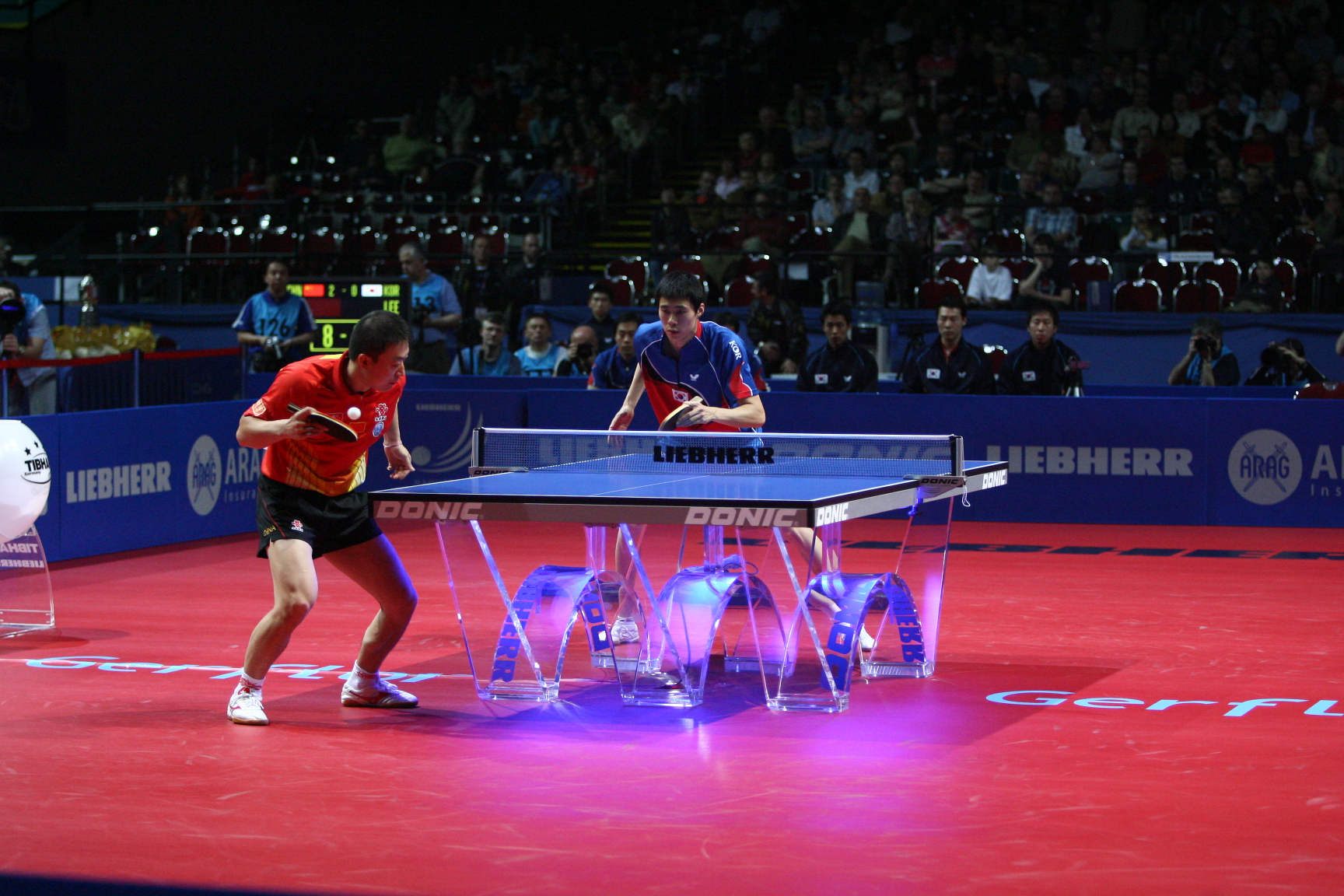 It’s getting decisively cagey in Bremen as Wang Liqin is made to work by Ryu Seungmin, as the Korea Republican nearly manages to turn the tide in his team’s favor. There was a moment of humor in the match, with the ball seemingly lost beneath the table – but the momentum for Wang was not to be paused!

The first match of the final goes to China – and how! Wang Hao playing against Oh Sanguen took no prisoners in his straight games win over the Korea Republic international.

Wang got the first game going with intent, driving his shots with ferocious pace and giving Oh no time to respond. Winning 3-0 (11-6, 11-8, 11-4), it felt Wang was getting better with each passing game. Can the Korea Republic team respond?

Welcome to the 2006 World Table Tennis Championships men’s team final here in Bremen! It’s a momentous occasion for the Korea Republic fans in the crowd as their side has reached the first-ever World Championships team final!

Facing them will be the defending champions, Team China, who have come through a powerful campaign and seen off the likes of teams Germany, France, Italy et al. For Korea Republic, the ride has been no less engaging, as they defeated Team Czech Republic in the quarter-final, followed by their win over Hong Kong in the semi-finals.

The Queen of Hearts has just escaped what would have been a major upset. As her fans now check their own heartbeats, it was a collective sigh at the end of that epic battle between Ding Ning and Wu Yang!

The two Chinese athletes could not have started with more intensity on the table, as the ball found itself shuffling across all directions on the table. First, Ding took a strong 3-0 lead which looked set to give her a straight games victory, only for her compatriot to come roaring back into the match with three games of her own! In the decider, the match was finely poised before Ding showed her class to claim a deserved, and exhausting win (11-8, 11-7, 11-5, 7-11, 6-11, 8-11, 11-8).

An all-Asian battle of top quality concludes with a gigantic shock for all present here in Suzhou – as the 25 year old Mu Zi has all but ended Singapore’s hopes of a medal in the women’s singles.

Taking on the Olympian Feng Tianwei, who claimed an important win over compatriot Yu Mengyu in the previous round, China’s Mu was in top gear throughout the match. Winning 4-0 (11-5, 11-2, 11-9, 11-5) just like in her last match against Sweden’s Matilda Ekholm, Mu gave Feng no space to work with and found her rhythm from the get-go.

For the first time ever China and Korea Republic have combined to win a World Championships title with Xu Xin and Yang Hauen partnering one another to mixed doubles glory in Suzhou.

Two of the most recognisable names on the professional table tennis scene, Zhang Jike and Vladimir Samsonov have played out a giant clash in the race for quarter-final places in Suzhou.

Spectators are treated to a sensational opening to the tie as Samsonov saved a combined total of four game points to force his opponent down to the wire, however, Zhang eventually converts. Both players continue to trade blows, producing a number of mouthwatering rallies in the process. But, there could only be one winner and that turned out to be two-time World champion Zhang (16-14, 11-8, 11-6, 5-11, 11-3).

Drama in the men’s singles draw as Fang Bo adds a huge scalp to the list of upsets in Suzhou with his elimination of Xu Xin!

Making a blistering start Xu took full advantage of the width of the table, forcing his fellow compatriot into uncomfortable positions throughout the course of the opening two games. But, Fang is a fighter and before long it is he who holds the lead with three consecutive game wins. Then, in game six disaster strikes for Xu, who requires medical attention to address a leg related injury – Fang shows no mercy and claims his ticket to the quarter-finals (7-11, 8-11, 11-8, 11-6, 11-9, 11-8).

A simply incredible effort from Japanese teenager Mima Ito, who continues to defy expectations with another exceptional performance at the 2015 World Championships in Suzhou.