Meet your Dream Men’s Team of the 21st Century!

The results are in after fans voted for their top five picks to make the Dream Men’s Team of the 21st century! 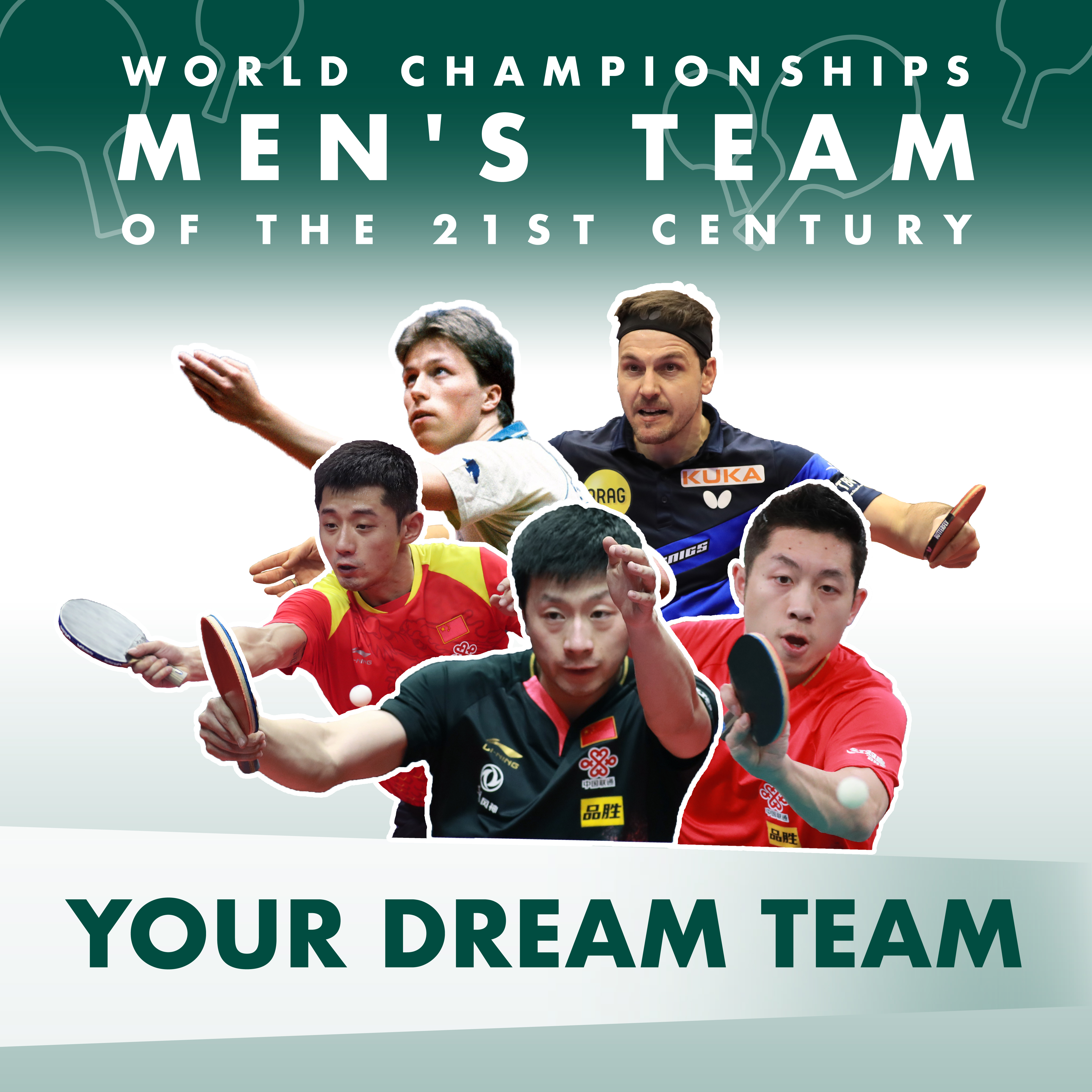 How the voting worked

Over the last month, you may have seen posts on the ITTF’s social media channels asking fans to carry out the simple yet extremely difficult task of listing their top five players for the Dream Men’s Team of the 21st century.

The responses came in their thousands, producing fascinating results, as we have tallied up all the numbers to reveal the five chosen male stars of the last two decades:

One name appeared a constant throughout the list of teams with Ma Long bringing in a whopping 15.4 per cent of the vote.

Ma’s record speaks for itself: the reigning World and Olympic champion, Ma has surpassed Vladimir Samsonov’s seemingly uncatchable number of 27 ITTF World Tour singles titles with 28 of his own. The 31-year-old has also won the World Tour Grand Finals title five times and lifted the Men’s World Cup twice. Nicknamed the Dragon and the Dictator, it seemed inevitable that Ma would be in with a shout in the race for top spot and he has accomplished it!

Few players command a legendary status, it’s fair to say Jan-Ove Waldner is very much amongst that exclusive group and it seems you agree with that statement too with the now retired Swede claiming the second largest amount of votes with 12.2 per cent.

Boasting a breath-taking longevity in the sport with his professional career spanning over three decades, Waldner to this day remains the sole European to win Olympic table tennis gold with his success at Barcelona 1992 and is one of only five male players to win a Grand Slam. A name that has been immortalised in the history books, it’s no surprise to see Waldner take his place in the Dream Team.

A second star from European shores also makes the team with Germany’s Timo Boll accruing 10.0 per cent of your backing.

The first player from his country to achieve World no.1 status in January 2003, Boll is a seven-time European singles champion and Europe Top 16 Cup winner, twice a Men’s World Cup gold medallist and has collected 19 singles titles on the ITTF World Tour. Recognised worldwide for his magnificent career, Boll’s spot in the team is well deserved.

If you thought the team already looked mighty it’s about to get even stronger with 8.9 per cent of the vote seeing Xuperman himself fly into fourth position.

18 men’s singles successes on the World Tour, Xu’s trophy collection includes Olympic, World Cup and World Tour Grand Finals medals to mention just a few and has proven a most useful doubles player in his time both on the men’s and mixed doubles fronts. A master of the art of penhold, Xu’s spot in the top five will go down well with the specialised grip’s fanbase.

The final position up for grabs in the Dream Team goes to big-time fan favourite Zhang Jike with 7.7 per cent in his corner.

The third Grand Slam winner in the top five, Zhang achieved his in just 445 days making him the fastest to do so. Zhang is one of only two players in the history of the sport to hold the Olympic, World Championships and World Cup titles all at the same time – Ma Long is the other. Superstar status and a huge celebrity presence back home in China, Zhang has clearly had a big impact on the world of table tennis. Making the top five of a simply incredible field is a fine feat indeed.

Ma Long, Jan-Ove Waldner, Timo Boll, Xu Xin and Zhang Jike would undeniably form quite the team, but there are some huge names who narrowly missed out on the top five.

Taking sixth position in the poll with 6.4 per cent of the vote is Beijing 2008 Olympic champion Ma Lin while three-time Men’s World Cup winner Fan Zhendong claims seventh with 5.4 per cent.Gold medallist at the World Championships in 2001, 2005 and 2007, Wang Liqin rounds out the top eight with 5.3%.