Meet your Dream Women’s Team of the 21st Century!

The results are in after fans voted for their top five picks to make the Dream Women’s Team of the 21st Century! 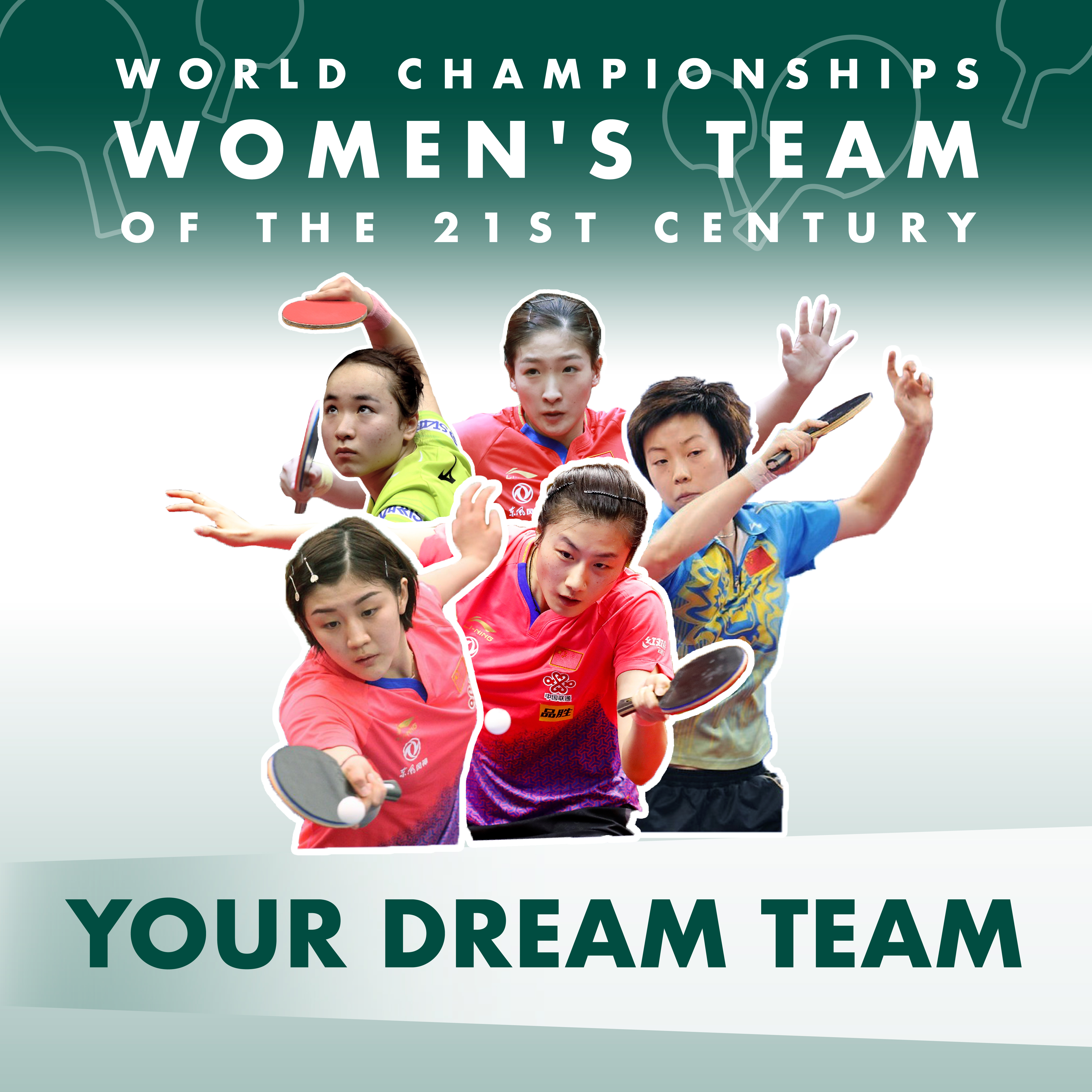 How the voting worked

Over the last month, you may have seen posts on the ITTF’s social media channels asking fans to carry out the simple yet extremely difficult task of listing their top five players for the Dream Women’s Team of the 21st Century.

The responses came in their thousands, producing fascinating results, as we have tallied up all the numbers to reveal the five chosen women’s stars of the last two decades:

Coming in at number one with an impressive 15.5 per cent of the vote is none other than the “Queen of Hearts” herself, Ding Ning.

Three-time world champion, Rio 2016 gold medallist and a holder of three Women’s World Cup titles, recording a 100% win ratio with her participation at the latter event, Ding has won it all on the singles front. Her team record is also stunning winning four World Championships and six Team World Cups with China. Ding’s list of accomplishments go on and on and is a leader befitting of any dream team.

Following on from Ding is one of the Land of the Rising Sun’s most exciting young talents in Mima Ito, who accumulated 13.4 per cent of the vote.

A persistent record-breaker from a young age, perhaps Ito’s standout moment came at Rio 2016 when she became the youngest-ever table tennis player to claim a medal on the Olympic stage aged 15! Eight ITTF World Tour singles titles to her name, analysing the results of the poll it appears Ito has already captured the hearts of the worldwide table tennis community.

Hot on Ito’s tail in a very tight race, Liu Shiwen finished just 0.2 per cent off the Japanese teenager with 13.2 per cent.

2019 was a special year for Liu who collected a record fifth Women’s World Cup, but the standout moment came earlier in the year as Liu won gold at the 2019 World Championships in Budapest. Victorious in the Hungarian capital, Liu had achieved her lifelong dream – it seems rather fitting to see her make the Dream Team cut.

Gathering 11.5 per cent of the vote, Zhang Yining joins the Dream Team cast in the number four spot.

Zhang’s record speaks for itself: ten World Championships titles to her name, Zhang also acquired four Olympic Games gold medals without losing a single match! Zhang also collected a record 29 singles titles on the Pro Tour, now known as the World Tour, lifted the Women’s World Cup four times and held the World no.1 spot for all but two months of an incredible era from 2003 to 2009. A true legend of the sport, Zhang takes her rightful place in the line-up.

Finally, rounding out the top five is current World no.1 Chen Meng who came away with 9.9 per cent of the vote.

Enjoying the majority of her success on the ITTF World Tour, Chen has won 15 singles titles on the Tour and was crowned World Tour Grand Finals champion for a third year in a row in December 2019. Leading the world rankings list since June 2019, it would have been very difficult to leave Chen out of the picture.

Obviously with the sport having produced so many great players over the years, missing out on the top five was always going to be harsh and there were some big-name stars who deserve an honourable mention.

2000 World Championships hero Wang Nan received the sixth-highest numbers of votes with 5.9 per cent. Next up was Japanese star Ai Fukuhara who picked up 3.4 per cent, finishing narrowly ahead of former World and Olympic champion Li Xiaoxia on 3.2%.