The city was Wuxi, on this day three years ago, Saturday 15th April at the 2017 Asian Championships, Japan's Miu Hirano caused an absolute sensation.

Contrary to all expectations, one day after her 17th birthday, she won the women's singles title.

Playing in a totally uninhibited manner, in an event where throughout matches were best of five games, she reached the quarter-final stage without the loss of a single game.

Matters appeared to be progressing as anticipated, Ding Ning won the first two games but then the tide turned. Focusing very much on directing her attacking strokes down-the-line, Miu Hirano secured the third, then the fourth after saving no less than five match points. In the fifth she led 10-8, Ding Ning saved both match points but at 11-10 could not saved a third. Miu Hirano had secured a sensational victory (3-11, 12-14, 11-9, 16-14, 12-10).

The match took place on the penultimate day of action, it was some birthday present!

“My overall level has improved a lot recently, I just try to play my best form on court. Last year on my birthday, Mima Ito beat Ding Ning at the Olympic Games Qualifications as well, so I think my birthday is rather special. It’s a very memorable birthday for me today.” Miu Hirano

A major boost of confidence, one day later, Miu Hirano playing without a care in the world, relishing every second, caused China further heartaches. 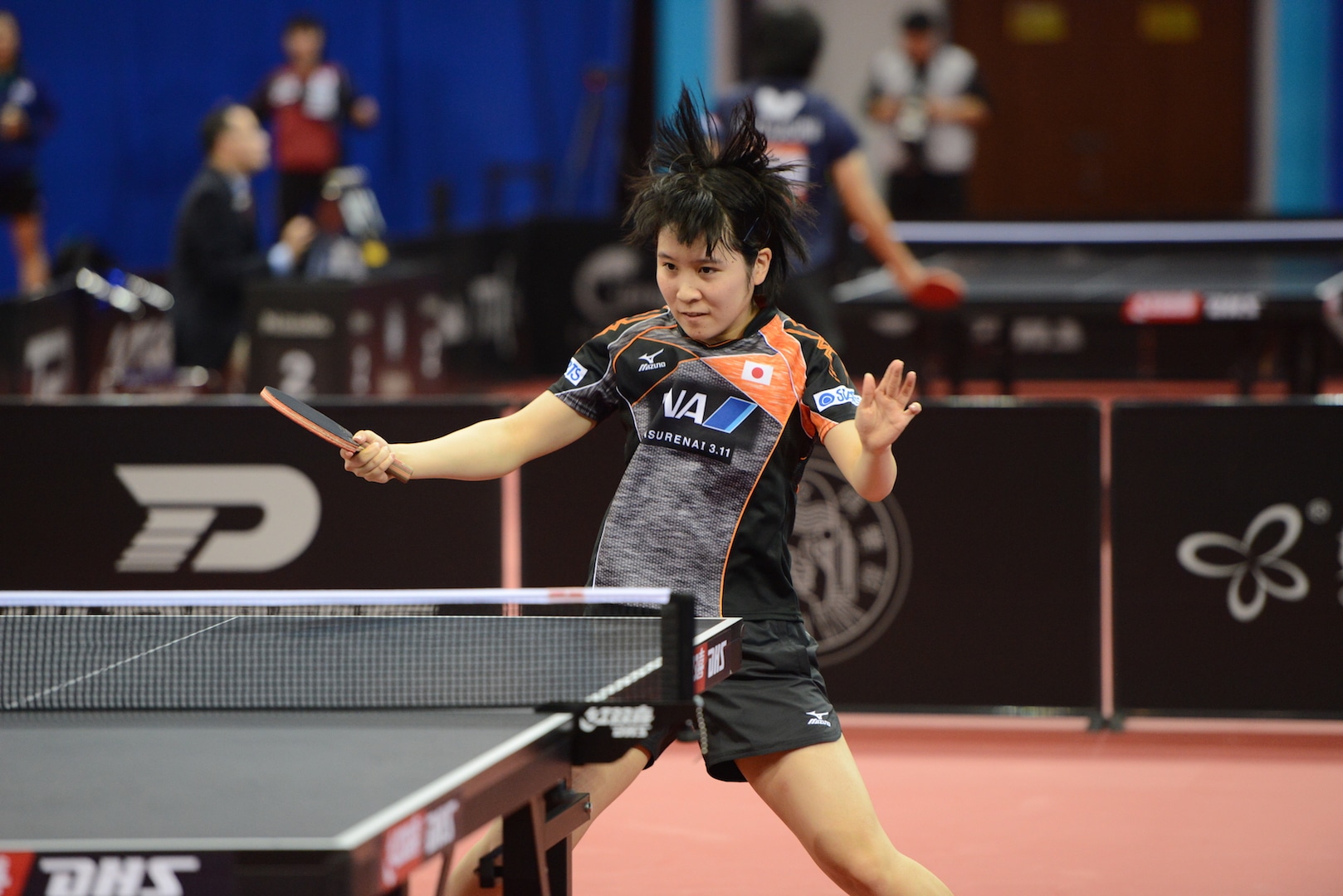 Unstoppable Miu Hirano, on her way to the final. (Photo:Zhao Chunsheng)

The speed at which Miu Hirano played was a key factor, she gave her opponents minimal time to react. Also her services caused problems; especially for Zhu Yuling.

“It’s the serve that caused me troubles when I led 8-4, 9-7 in the second game. We have to go back and study more on Hirano’s serves, I made several errors while trying to receive her serves; that disturbed my rhythm.” Zhu Yuling

China had been hit by a player executing her skills at breakneck speed. “Hurricane Hirano” had ended a drought. Since 1972 when the Asian Championships had been organised by the Asian Table Tennis Union, it was only the third third time when a player representing Japan, had won the women’s singles title.

In Kallang in 1996 Chire Koyama, the former He Zhili who had been crowned  world champion in 1987 in New Delhi before changing allegiance to Japan, had emerged successful.

Prior to that success, the only other occasion when the Land of the Rising Sun had struck gold was in 1974 in Yokohama. On that occasion Japan occupied all three steps of the podium. Tomie Edano was the winner, Tazuko Abe the runner up, the losing semi-finalists Yukie Oseki and Sachiko Yokota.

Thus Miu Hirano joined the illustrious group of players who had secured the top step of the podium representing a national association other than China. The only other player on the list is Lin Ling. She won in 2005 in Jejudo when on duty for Hong Kong China, having five years earlier in 2000 succeeded in Chinese colours in Doha.

Moreover, not only had Miu Hirano won the title, she had secured success the hard way. She had beaten three elite members of the Chinese team in succession.

“I’m very happy and surprised with the victory. I had never thought that I could defeat the Chinese players, let alone upsetting three in a row. Previously against Ding Ning, I have never won, not a game off her.” Miu Hirano

In elite company and in very elite company; Miu Hirano shares the same birthday as Diane Schöler, the former Diane Rowe, the current President of the Swaythling Club International; she is the oldest living world champion.

Miu Hirano has done it! The 17 year old has made history by becoming only the 3rd ever non Chinese player to become the Asian Champions, beating 3 Chinese players along the way. #Congratulations #ITTFAsianChamps