Pick your Dream Men's Team of the 21st Century!

Rewind the major events from 2000 to 2018; who have been the star names, the headline makers?

Which men would gain places in your #DreamTeam? 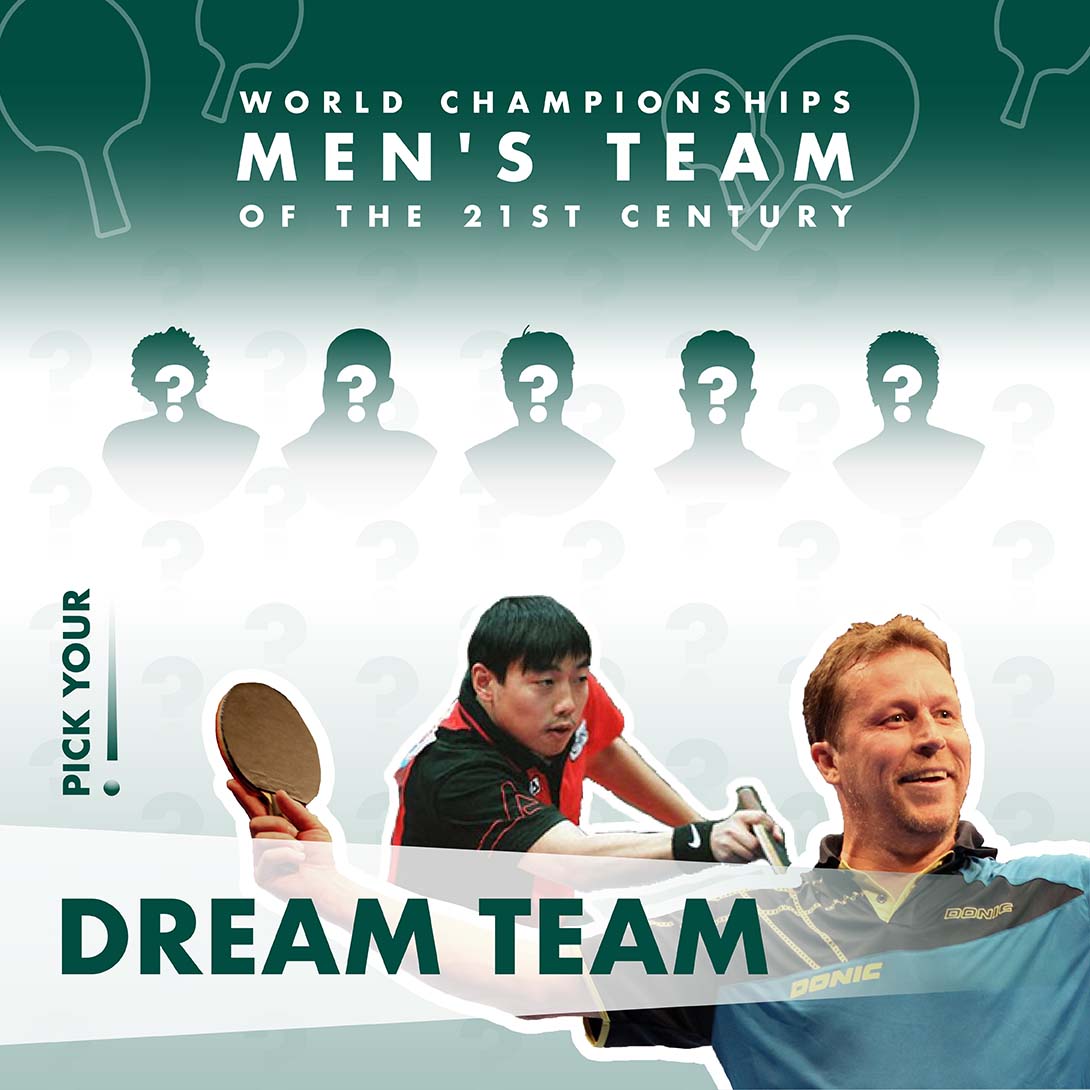 At the dawn of the new millennium, both left handers Jean-Philippe Gatien and Patrick Chila made a combination work that at international level had never previously secured the highest honours. They proved that two lefts can make everything right. They secured bronze at the Sydney 2000 Olympic Games and gold and in the same year gold at the European Championships in Bremen.

A player from the era when the balance changed and European men dominated the scene. Always known as “Rossi”, the German set standards for young players to follow. He won bronze at the 2001 Men’s World Cup in Courmayeur and was a member of the outfit that reached the semi-finals of the Liebherr 2006 World Team Championships in Bremen. Rosskopf was a formidable opponent even in the twilight of his career.

At the 2000 World Team Championships in Kuala Lumpur, Jan-Ove Waldner recorded the first win of his career over Liu Guoliang to set Sweden en route to victory in the men’s final against China. Later at the Athens 2004 Olympic Games, wins over Germany’s Timo Boll and China’s Ma Lin brought Swedish fans to their feet, the king and queen of Sweden being present to offer their congratulations. Eventually he finished in fourth place losing to Korea Republic’s Ryu Seungmin in the semi-finals and China’s Wang Liqin in the bronze medal match. He made his farewell to international play at the Liebherr 2006 World Team Championships in Bremen; significantly the tournament when Ma Long made his debut.

Alongside Waldner was Persson, with his wins over Kong Linghui and Liu Guoliang proved to be the backbone on Sweden’s success in the 2000 World Team Championships final against China. He went on to secure bronze the very next year at the 2001 World Team Championships. In 2005 he announced his retirement but the lure of trying to win an Olympic medal proved too great. He returned to action but it was not to be the outcome. At the Beijing 2008 Olympic Games he finished in fourth place in the men’s singles event.

Alongside younger brother Philippe, Jean-Michel Saive lifted their team from a third division outfit at the World Championships to runners up spot in 2001. Setting whole new standards for the small European nation, Saive was the rallying call for all Belgian fans. Later he secured men’s singles silver at the 2005 European Championships in Aarhus and the same colour medal at the end of the year at the ITTF World Tour Grand Finals in Fuzhou.

The greatest moment in the career of Liu Guozheng came at the 2001 World Championships when he kept Chinese hopes alive. Playing in the crucial fifth match of the semi-final contest against Korea Republic, he saved seven match points against Kim Taeksoo to book a place in the final. Lining up alongside Kong Linghui and Ma Lin, a 3-0 win was recorded in the final against Belgium. Later in 2004 in Doha, he was a member of the successful outfit at the World Team Championships.

At the Sydney 2000 Olympic Games, Liu Guoliang proved he was still a major force. He was a men’s singles bronze medallist, losing to Jan-Ove Waldner in the semi-finals before overcoming Jörgen Persson in the third place contest. Additionally he partnered Kong Linghui to men’s doubles silver, the pair losing to colleagues Wang Liqin and Yan Sen. A master in the art of service and first attack, he was a member of the team that lifted gold at the 2001 World Championships in Osaka.  Moreover, the example he set is respected to the present day.

Patriotic to the hilt and one of the most well-known sportsmen in the whole of Croatia, Zoran Primorac seemed to have a liking for Qatar. In 2000 he won the men’s singles title in Doha for a third consecutive year. It was also the year when he secured the silver medal at the European Championships, before winning bronze at the 2002 Men’s World Cup. Most notably like Jean-Michel Saive and Jörgen Persson, he competed in seven consecutive Olympic Games.

The name that rang across stadiums in 2003, Werner Schlager caused a sensation when he won the men’s singles title at the Liebherr World Championships beating Joo Saehyuk in the final. Overall in world ranking events, they met six times; it was the only time the Austrian won! A double Europe Top 12 winner (2000, 2008) Schlager was part of Austria’s 2005 European Championships silver medal team in Aarhus alongside Karl Jindrak, Robert Gardos, Chen Weixing, and Konstandin Lengerov.

The man who broke the mould, Joo Saehyuk was Korea Republic’s first male modern day style defender possessing a strong forehand top spin. A bronze medallist with Kim Taeksoo, Lee Chulseung, Oh Sangeun and Ryu Seungmin at the 2001 World Team Championships, he was crucial for his country reaching their first ever final in a men’s team event at World Championships when they finished runners up in 2006 in Bremen. In total, he secured four bronze medals and two silver medals at World Team Championships as well as the 2012 Olympic Games men’s team silver.

Ma Lin won the Men’s World Cup on four occasions, the most successful of all. However, there is another record he holds. He remains the only player to have won the men’s singles, men’s doubles and men’s team titles at an Olympic Games – no other player has won all three. At the World Team Championships, he holds six  gold medals (2001, 2004, 2006, 2008, 2010, 2012) and a solitary silver from the 2000 edition.

A counter topspin player executing his skills a step away from the table, Wang Liqin was very much at the vanguard of a change of thinking for table tennis in China. Winner of the men’s singles title at World Championships on three occasions, he formed a successful doubles partnership with Yan Sen that ruled the men’s doubles stage for several years. Notably they claimed gold at the 2000 Sydney Olympic Games. In the present century, Wang also won 19 ITTF World Tour men’s singles titles and one at the ITTF World Tour Grand Finals.

A three time men’s singles silver medallist at the Olympic Games but equally a three times winner of the Men’s World Cup and crowned World champion in 2009 in Yokohama, Wang Hao proved time and again crucial to China’s men’s team success at both the Olympic Games and World Championships. He secured gold at the 2004 World Team Championships alongside Ma Lin, Wang Liqin, Kong Linghui and Liu Guozheng. Later he succeeded at the 2006, 2008, 2010, 2012 and 2014 editions. Furthermore, he won men’s team gold at the Beijing 2008 and London 2012 Olympic Games.

Against the odds Ryu Seungmin won men’s singles gold at the Athens 2004 Olympic Games when he emulated colleague Yoo Namkyu who had won in 1988. Ryu Seungmin was very much the last of the pen-hold grip players to appear from the Korea Republic and succeed on the international stage. An outstanding example. He won two bronze (2001, 2004) and three silver medals (2006, 2008, 2012) at the World Team Championships.

For someone with ‘Magic’ as his middle name, there’s little else to prove for him to be a legend and on any #DreamTeam. Throughout this century, Timo Boll has been the knight in shining armour for both Germany and Europe. Most notably he won the Men’s World Cup in 2002 on his debut in the event. Sending out warnings for his coming conquests, he went on to win the competition again in 2005, reaching the final six times. At the European Championships he has no less than 19 gold medals to his name, and six silver medals at the World Team Championships.

A trendsetter from the first time he placed his feet at the arena, Zhang Jike is a legendary name in table tennis. Having won gold at four consecutive World Team Championships (2010, 2012, 2014, 2016), he quickly became the most popular name in the sport. In 2011 he had won at the World Championships and the Men’s World Cup. He followed that the next year by winning the men’s singles title at the London 2012 Olympic Games, thus holding all three major titles at the same time.

A stalwart of his national team, Jun Mizutani is the only Japanese player to have won a medal in the men’s singles event at an Olympic Games. A four time fourth place finisher at the Men’s World Cup, he has won four bronze medals at the World Team Championships (2008, 2010, 2012, 2014) and one silver in 2016 with Kenta Matsudaira, Koki Niwa, Yuya Oshima and Maharu Yoshimura. He won the men’s singles title at the ITTF World Tour Grand Finals in 2010 in Seoul and 2014 in Bangkok.

The Dragon himself, Ma Long very much followed in the footsteps of Zhang Jike; when he won the men’s singles title at the Rio 2016 Olympic Games, he held all three major titles at the same time. In 2015 when he was crowned World Champion in Suzhou, later in the year he won the Liebherr Men’s World Cup in Halmstad. The legend of Ma Long is such that he is the first player since Zhuang Zedong in the 1960s to win the men’s singles title at a World Championships on three consecutive occasions. Oh, and add to that his seven consecutive gold medals at the World Team Championships (2006-2018), record-breaking 28 ITTF World Tour titles and you can see why he’s often called the “Best of All Time”.

First crowned World junior champion in 2012 in Hyderabad, India, year by year Fan Zhendong has become a principal player in the Chinese national men’s team. Three times the winner of the Men’s World Cup underlines his quality. The World Team Championships for him have also been exceptionally successful, gold medals in 2014, 2016 and 2018.

Mr Longevity, the most successful player ever at the European Youth Championships, his first title being the cadet mixed doubles in 1988 with Oksana Kush, Vladimir Samsonov continues to be a major force at international level today. Plying his skills in now five decades, he holds a record that cannot be beaten for at least the next 80 years – he is the only player the win the Men’s World Cup in different centuries (1999, 2001, 2009). ‘Vladi’ as he is fondly called, with his 22 ITTF World Tour men’s singles’ titles this century is a true legend.

A fine player in his own right but an expert in doubles. At World Championships he has won five doubles titles but never with the same partner. He won the men’s doubles partnering Ma Long in 2009, Zhang Jike in 2015 and Fan Zhendong in 2017; the mixed with Yang Haeun in 2015 and Liu Shiwen in 2019. At the Rio 2016 Olympic Games, alongside Ma Long and Zhang Jike, he secured men’s team gold. He won the Men’s World Cup in 2013 in Verviers, the ITTF World Tour Grand Finals in 2012 in Hangzhou and the following year in Dubai.