Pick your Dream Women's Team of the 21st Century!

Rewind the ITTF World Team Championships from 2000 to 2018; who have been the star names, the headline makers?

Which women would gain places in your #DreamTeam? 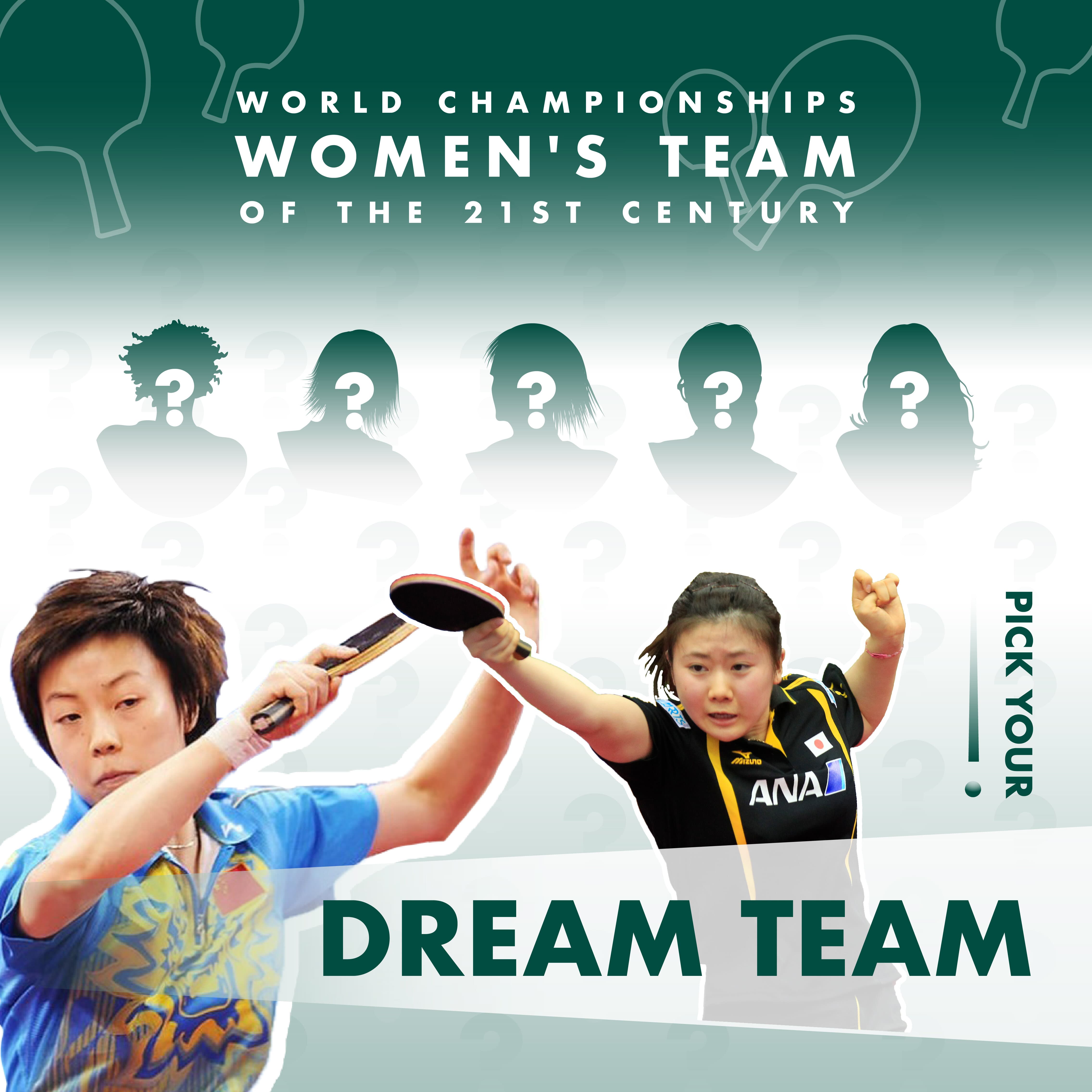 While no dream team will see them separated, Li Ju on her own also was as legendary as her teammates. A leader in her own right, she was the one to always push on the attack when their trio was in danger.

When China beat beat Chinese Taipei’s Chen Jing, Tsui Hsui-Li, Xu Jing 3-1 in the 2000 World Championships final, it was Wang Nan’s rallying cry that truly sounded the alarm for anyone watching for years to come.

The young Chinese at the time was a speed demon and kept up the pressure on her opponents with fierce shot making as well as on time returns, which made her teammates’ job all the much easier.

Such an impressive success for these three was soon followed by victory at the 2001 World Championships in Osaka.

Zhang Yining was at the forefront of that win. She overcame the challenge of DPR Korea’s Kim Hyang Mi, Kim Hyon Hui, Tu Jong Sil in straight games in the final. A team of legends like no other, Zhang and her colleagues certainly opened the World Championships of a new millennium in style.

The 2004 World Team Championships in Doha was one to remember. A different system was introduced and that led to a different set of legends joining the fray.

The win meant that China booked their place in the final, while Japan progressed to face Hong Kong’s Lau Sui Fei, Tie Yana and Zhang Rui in the match to decide a place in the final. They experienced a 3-0 defeat, Hong Kong advanced to the final where they faced China who made a change to their selection.

Thus at 17 years and 231 days old she became the youngest player to strike gold at a World Championships; the record stands to this day and may well stand for many years to come. Later she was a member of the gold medal winning outfit in the women’s team event at the Beijing 2008 and London 2012 Olympic Games.

In late April in Bremen, it was a family affair, twin sisters Veronika and Viktoria Pavlovich secured a place in the semi-final of the women’s event for Belarus at the Liebherr 2016 World Team Championships; both right handed, Veronika was an attacking top spin player, Viktoria the stalwart rock solid defender.

Facing Korea Republic in the quarter-finals, both opposed defenders, Kim Kyungah and Park Miyoung. They recorded a 3-1 win, Viktoria the heroine. She beat Park Miyoung in the opening match of the fixture (11-3, 11-5, 11-6), before in dramatic fashion accounting for Kim Kyungah in the contest that brought play to a conclusion (11-9, 14-12, 11-9). Arguably she had beaten the best two defensive players of the time.

At the semi-final stage Belarus lost 3-0 to China’s Guo Yue, Wang Nan and Zhang Yining but on the podium it was all smiles; the only occasion when Belarus has won a medal in a team event at a World Championships.

At the Liebherr 2010 World Team Championships in Moscow, Feng Tianwei rose the occasion as she enjoyed the best day of her career and Singapore celebrated for months on end. A 3-2 win was the order the day at the final hurdle against China.

Notably all members of the Singapore team were Chinese born; later in search of international play, they had transferred their allegiance to Singapore.

A four-time Olympian, Japan’s Ai Fukuhara has probably played one of the longest matches in the history of the World Team Championships when her side faced Korea Republic in the 2010 edition of the competition; that match, believe it or not, lasted hours!

The future silver-medallist at the 2012 London Games was up against Park Miyoung in the final game of the match that she eventually won 11-5. However, this match itself saw the best of Ai Fukuhara and the way she managed to balance the tie in the favour of her team. It became a blueprint for her performances in the future editions of the competition, leading her to the final of 2016 World Team Championships.

A strong and calm athlete in the face of tense climates, Ai Fukuhara is one for any #DreamTeam.

After the Moscow defeat in 2010, Team China came back with a vengeance at the 2012 World Team Championships in Dortmund, regaining the women’s team title and in some style. In the whole tournament they surrendered just one match.

At the semi-final stage, China’s Li Xiaoxia lost to Tie Yana (12-10, 11-9, 7-11, 14-12) in an intense battle where Tie showcased her class to the world. Playing without fear, Tie really instilled doubt in the hearts of Chinese fans; that was an achievement in itself.

Very much a team effort, Ai Fukuhara injured, the focus very much fell on the shoulders of Kasumi Ishikawa, Yuka Ishigaki and Sayaka Hirano; Sakura Mori and Saki Tashiro completed the squad. However if one player proved pivotal, it was Sayaka Hirano.

At the semi-final stage, Japan faced Hong Kong. The fixture was in the balance at 1-1, and the third match was crucial. In came Sayaka Hirano, facing Ng Wing Nan, where she lost the opening two games and then in the third trailed 7-2.

Despite losing in the final to China’s Ding Ning, Li Xiaoxia and Liu Shiwen, the Japanese were delighted as it was the first time since 1983 they had reached the final of the women’s team event at a World Championships. The venue the very same hall in Tokyo!

Powerful, Li Xiaoxia, was a member of the 2012 who regained the women’s team title after having lost in 2010 to Singapore.

The 2016 World Team Championships’ campaign for Team Chinese Taipei saw a confident Cheng I-Ching in action. She helped her team to a 3-2 win over Hong Kong in the last eight of the tournament in Kuala Lumpur, Malaysia that assured them the bronze medal was something worth remembering.

It was the second time Chinese Taipei had achieved podium status but the bronze medal had a special meaning. In 2000 when they had silver both Chen Jing and Xu Jing played; both had changed allegiance having previously represented Chinese. The 2016 team was born, bred and developed in Chinese Taipei.

But the two names that did not miss out on any action from the 2010 World Championships were the Chinese legends Ding Ning and Liu Shiwen.

The ‘Queen of Hearts’ has been more than just imperious in her performances at this competition – her despite her first foray in 2010 ending with Singapore winning the title. Her return in action two years later in Dortmund brought the fans joy as she obliterated her opponents with flying shots from across the table with utter ease.

Ding was the centre-focus when China met Singapore again in 2012, with Li Xiaoxia and Guo Yue partnering Ding against Singapore’s Feng Tianwei, Wang Yue Gu and Li Jia Wei. Winning the match 3-1 overall, China regained the title and Ding went on to do the same in 2014, 2016 and 2018!

Right alongside her though, was Liu Shiwen.

The recently World Champion-turned-World Cup winner played and won the 2016 World Team Championships’ final in straight games against Japan’s Kasumi Ishikawa, Ai Fukuhara and Mima Ito. This was her first outing in the finals of the tournament, which then became a regular feature for her.

She faced Japan again in the 2018 World Team Championships alongside Ding Ning and Zhu Yuling, when China won 3-1. Despite losing the opening game against Ito, Liu and her teammates accounted for Miu Hirano and Kasumi Ishikawa in style to record another gold medal finish.

She led Japan to a 3-0 win against the Korea Unified team at the semi-final stage of the women’s event at the Liebherr 2018 World Team Championships in Halmstad.

So who makes your final Dream Team?