It was a day of increasing pace as qualification concluded on Thursday 12th March at the 2020 ITTF Challenge Plus Oman Open in Muscat, there was a fair share of surprises.

The question posed is as to whether the qualifiers ready to meet their seeded opponents?

Qualification with a pinch of salt

The crowds were delighted with the fight shown on the second day of qualification. In the women’s singles, Belgian Nathalie Marchetti found her form at the right time to qualify for the main stage, beating India’s Sagarika Mukherjee (19-17, 12-10, 8-11, 11-8).

“My estimation was to push the ball on the table always wishing that she will make mistakes and I played top spin to her backhand and then I needed to push again because she has a special rubber but I think that I did very well. Next will be mixed doubles qualification and I hope to win.” Tatiana Kukulkova

The men’s singles saw a similar show of force from Sanil Shetty, who is in hot form here in Oman. The Indian cruised through the group stages winning all his games. He is joined in the next round by Ahmed Zayed and Issa Al-Riyami from his group.

It was group three where the most action was seen as Jeet Chandra, Sanil’s compatriot had to withstand the mammoth challenge of Nigeria’s Abdulrahman Abdullahi in a fiercely fought five game thriller (10-12, 12-10, 11-5, 9-11, 11-4) .

“It was a pretty tricky match and he was a tricky player but I won the match. From tomorrow I have to focus to start with higher concentration.” Jeet Chandra

In the afternoon session in Muscat, the main event in the mixed doubles began with the first major upset seen as the 2020 ITTF Challenge Plus Portugal Open champions, Emmanuel Lebesson and Yuan Jia Nan, were eliminated. The French duo, seeded sixth, lost to Singapore’s Pang Yew En Koen and Lin Ye (13-11, 15-13, 6-11, 11-6).

It turned out to be a good day for Nathalie Marchetti as she capped off her morning win in the women’s singles with a mixed doubles’ win. She and Florent Lambiet inflicted defeat on the seventh seeded Slovakians Wang Yang and Tatiana Kukulkova (13-11, 4-11, 11-9, 11-6).

Portugal’s Marcos Freitas is the top seed in the men’s singles event in Muscat, and he is set to enter the playing field tomorrow when he faces the winner of the battle between the seeded Mudit Dani and qualifier Asad Alraisi. Freitas is an experienced battler at the highest level and the 2014 ITTF World Tour Czech Open winner. 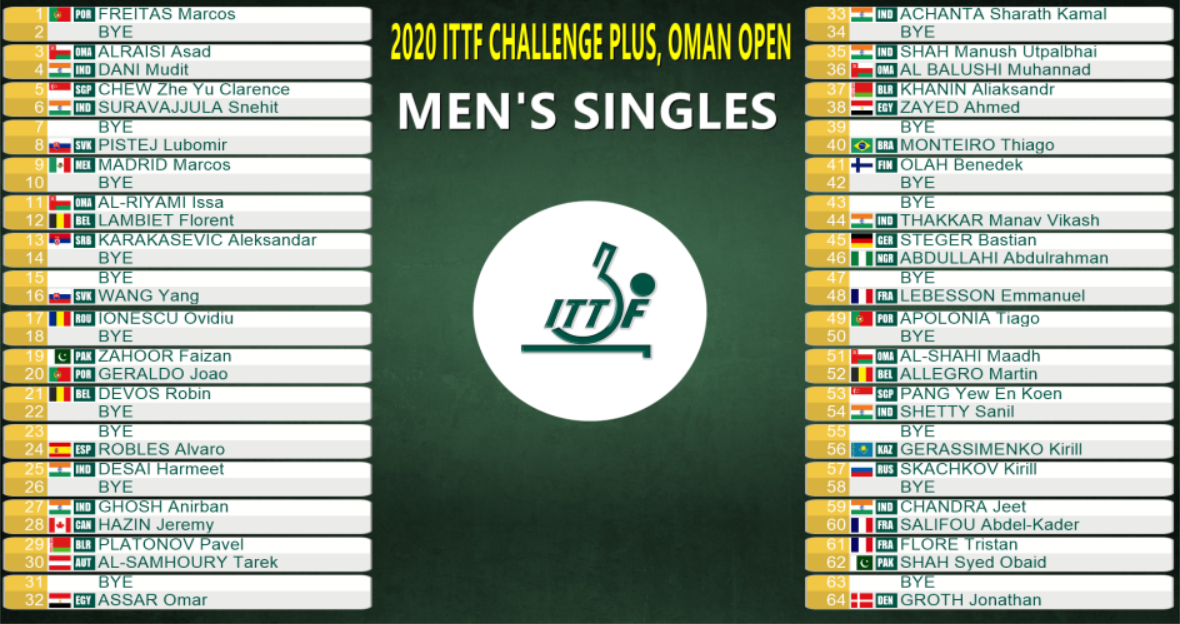 Belgium’s Ovidiu Ionescu is already in a winning mood as he proved with his mixed doubles partner, Bernadette Szocs. He will be facing the winner between fellow seeded João Geraldo from Portugal and the qualifier from Pakistan, Faizan Zahoor.

The likes of Omar Assar, Sharath Kamal Achanta, Jonathan Groth and Lubomir Pistej all join the fray on Friday. Spain’s Alvaro Robles and Belgian Robin Devos, however, seem to have the short straw as seeds, they face each other in an exciting round of 32 match later tomorrow.

Women’s seeds have no plans for going easy

In an event that is set to see a strong Japanese presence, fourth seed Honoka Hashimoto and third seed Miyu Kato will join their compatriot, the top seed and four ITTF Challenge Series winner, Hitomi Sato in making sure the Japanese flag is at the podium. Sato will play the winner from the match between qualifier Surtitha Mukherjee from India and France’s Laura Gasnier. 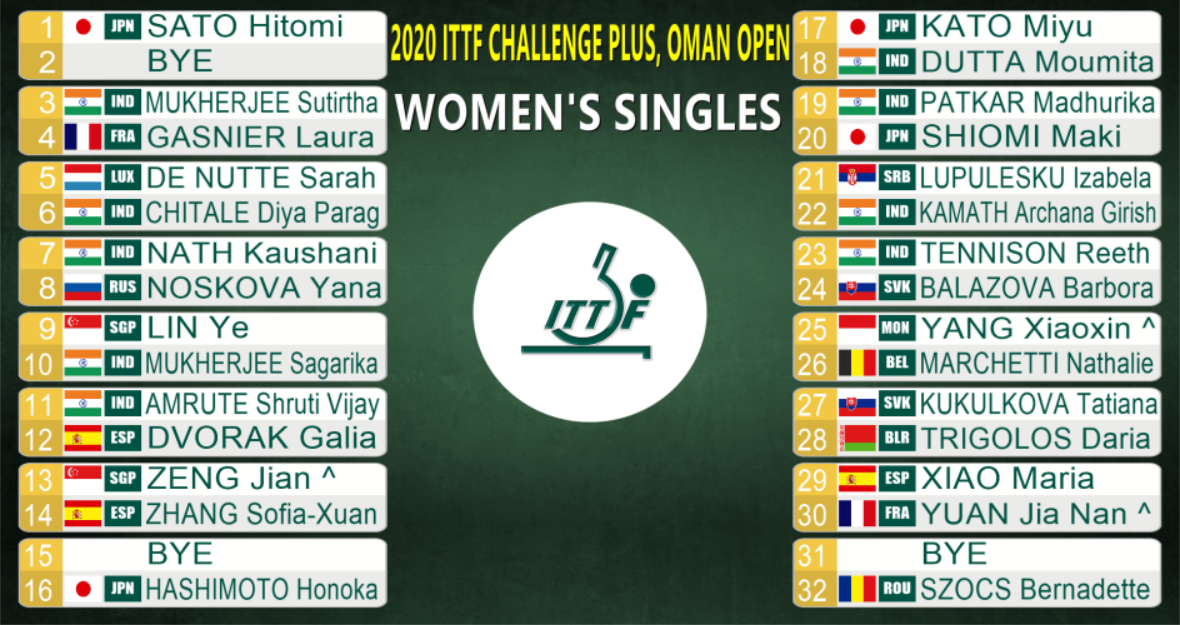 Much like the top seeds in men’s singles, the leading women who are looking set for the podium from the start.

One of those will be Romania’s Bernadette Szocs, the no.2 seed, who last won a major title at the CCB Europe Top 16 in 2018. She’s set to face the winner from the match between fellow seeds Maria Xiao from Spain and France’s Yuan Jia Nan.

Who’s ready for the main event?