Follow the action live from 10:00 am local time in Magdeburg on the morning of Friday 31st January.

Experience prevails in battle of generations

“In the first three games, I lost but I think it was not bad. I had some careless misses, if I could recover these misses, winning the match was still possible. I tried to make him miss the point and play every point carefully. Last year I was in a bad situation, but it returns and I think I proceed very much this year.” Jun Mizutani

Crowd help Dima over the line

“I think my opponent prepared for this match very well, it made things difficult for me. I tried to play more active and shout out to help me play better. Every point is important, it is the key to winning the match!” Lin Gaoyuan

German stars give it their all but plaudits go to China

Having met only last month in the title deciding match at the 2019 ITTF World Tour Grand Finals, China’s Xu Xin and Liu Shiwen will face off with Japan’s Jun Mizutani and Mima Ito once again after both pairs successfully came through their mixed doubles semi-final encounters in Magdeburg.

Hirano and Ishikawa fight their way to victory

Awaiting the Japanese pair in the final is another Chinese partnership in the form of top seeds Chen Meng and Wang Manyu, who also came through a four-game tie against the host nation’s Nina Mittelham and Petrissa Solja (11-4, 7-11, 15-13, 11-4).

“The prolongation of the third game was annoying but we played a surprisingly good cooperation. With Petrissa Solja I am playing after more than six years again with a left-hander. It will become a good partnership within the next competitions.” Nina Mittelham

Seeded first for the men’s doubles competition but Jeoung Youngsik and Lee Sangsu won’t be present in Saturday’s final after losing out to Cho Daeseong and Jang Woojin 3-1 in an all-Korean semi-final affair (11-8, 11-5, 7-11, 11-3).

“During the first two sets we had some chances to win the sets. During the match against Franziska and Ovtcharov we had some great chances. During the next tournament we will play together further doubles competitions and will see if we have more success.” Cedric Nuytinck

Zhu and Wang through to quarters

In a double win for China, Zhu Yuling and Wang Yidi came out on top over their opponents, German Petrissa Solja and China’s He Zhuojia.

“During the first two sets I had the chance to receive some points more to win the sets. I am satisfied with my performance and angry about my faults. This was the reason why the result was not so successful.” Petrissa Solja

Sadly for Japan it was difficult afternoon on multiple fronts, as Hina Hayata had to withdraw due to an injury, sending Chinese Olympian Ding Ning through to the quarter-finals. We wish Hina a speedy recovery.

Fan Zhendong with Zhou Yu could not handle the speed of the Korea Republican duo of Lee Sangsu with Jeoung Youngsik, in a clinical 3-1 win for the top seeds (7-11, 11-7, 11-7, 11-4). despite losing the first game, Sangsu and Youngsik stuck to their gameplan and found their feet to attack the Chinese pairing with wide shots and a good defense.

For their compatriots, Cho Daeseong with Jang Woojin it was a much more difficult task against the Japanese pairing of Shunsuke Togami with Yukiya Uda. The young duo are in great form from the All Japan national tournament, and kept their opponents waiting until the decider, with Cho and Jang winning 3-2 (11-3, 9-11, 11-8, 8-11, 11-4) in a feisty battle.

Chen Meng with Wang Manyu were in a rush against Hong Kong China’s Lee Ho Ching and Soo Wai Yam Minnie, seeing off their challenge in 17 minutes and straight games (11-6, 11-5, 11-2). 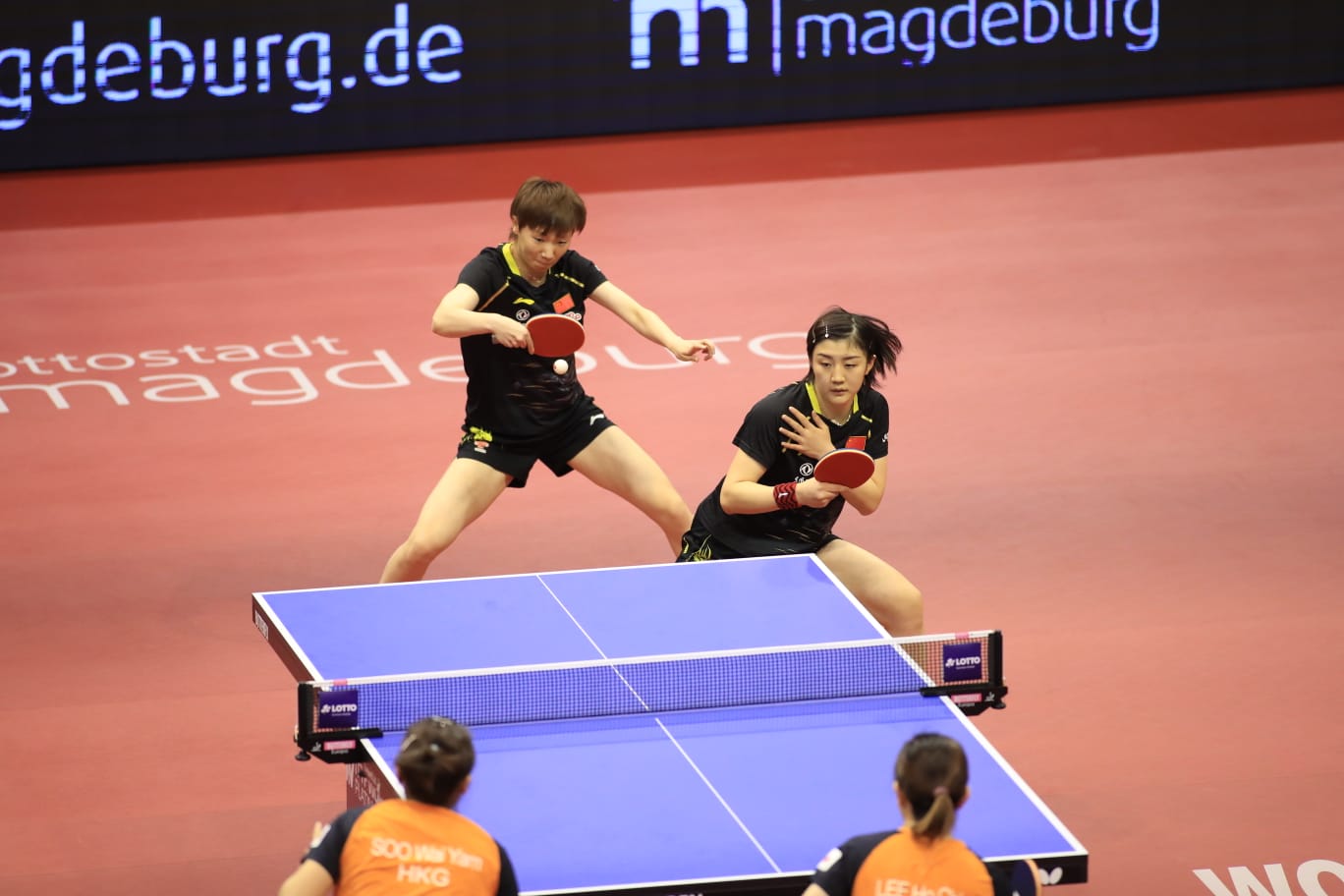 Over at table 2, however, there was to be no match at all as Jun Mizutani with Mima Ito progressed to the semi-finals by default because of the withdrawal by Spain’s Alvaro Robles and Maria Xiao.

Meanwhile, home favorites, Patrick Franziska and Petrissa Solja have been immensely patient in their battle against the other pairing from Hong Kong China, as they beat Wong Chun Ting and Doo Hoi Kem 3-0 (11-5, 11-4, 15-13).

Who’s ready for the knock-outs?