Serving as a qualification event for the Tokyo 2020 Olympic Games, play commences at the 2020 ITTF World Team Qualification Tournament.

Follow the action live from 09:30 am local time in Gondomar on the morning of Wednesday 22nd January.

Both 1-2 down at the halfway stage of their respective encounters, India and Czech Republic have successfully turn their fortunes around to beat Sweden and DPR Korea 3-2.

“We knew that it would be a tough match. We are happy that we managed it. The Korean No.1 played in position 3 and we didn’t expect that. We will give our best, but the Korea Republic team is one of the best teams in the world. This event is more emotional because are playing for the whole Czech Republic. We have a good team and we are very good friends. It gives us more confidence.” Tomas Polansky

Korea Republic move 2-0 up following Jang Woojin’s win over Alexander Shibaev (11-7, 11-7, 11-6) and the Czech Republic is level with DPR Korea at 1-1 with Pavel Sirucek turning in a positive display for the European side. Matilda Ekholm has put Sweden back in front and now lead India 2-1.

“We were preparing for every opponent, we were expecting that it was possible to play against anyone, outside the first eight. For now, we are going to watch the match, Sweden against India, and tomorrow we will prepare.” Daniela Monteiro Dodean

Over on table 2 Korea Republic are 1-0 ahead against Russia with Lee Sangsu and Jeoung Youngsik also recovering from a one-game deficit against Vladimir Sidorenko and Kirill Skachkov (14-16, 11-4, 11-4, 11-7).

Romania off to flying start

2019 European champions Romania aren’t wasting anytime in their opening round meeting with Italy, emerging victorious in the doubles and picking up a singles win courtesy of Bernadette Szocs who beat Debora Vivarelli (11-6, 11-8, 11-3). Sweden leads India in the other 19.30 women’s team fixture.

Victories to celebrate for Hungary, India and Slovenia

Team India will be present amongst the last 16 in the men’s team race with Sharath Kamal Achanta’s victory over Luxembourg’s Eric Glod bringing the tie to a close – it has finished India 3-0 Luxembourg. Elsewhere, back-to-back successes for Darko Jorgic and Bojan Tokic sees Slovenia battle past Iran 3-1.

An incredible display from Luka Mladenovic but ultimately he falls short as Sathiyan Gnanasekaran recovers from two games down (8-11, 9-11, 11-3, 13-11, 11-6) to extend India’s advantage over Luxembourg to 2-0.

Iran has pulled levelled at 1-1 with Slovenia on table 3 following Noshad Alamiyan’s victory over Bojan Tokic. On table 4 Dora Madarasz proved too strong for Mateja Jeger in a four-game battle – Hungary leads Croatia 2-0.

“We feel more motivated playing at home, with the public. We know how important an event this is, so we practiced a lot to be ready to play our best. Every team is good, it’s difficult, but we are motivated and are going to do everything to try and win.” Shao Jieni

Testing start but Slovenia edges ahead

What a start we’ve just witnessed to the men’s team contest between Slovenia and Iran with the European nation’s Deni Kozul and Darko Jorgic fighting back from behind twice to inflict a 3-2 defeat upon Hamidreza Taherkhani and Nima Alamian (10-12, 11-4, 8-11, 11-9, 11-8).

In the other men’s team Round of 32 fixture, India leads Luxembourg 1-0 while the two women’s team battles favour Hungary and hosts Portugal in their respective meetings with Croatia and Slovakia.

Here’s what Sofia Polcanova had to say following Austria’s victory over Czech Republic:

Liu Jia and Sofia Polcanova have helped their side achieve a momentous 3-0 win over Team Czech Republic.

“At first we were a little bit nervous because I think we were favourite, and it’s not easy to play with the pressure, and it’s not easy to start the game with doubles, but we refocused and manage to win.
I was playing with the score 2-0 for me which gave me more confidence. I just focused on my game properly and it worked. It’s going to be the final match, who wins qualifies, and everybody is so nervous so the focus will be the more important thing.” Galia Dvorak

Shin Yubin closed the shop in style for Korea Republic, as they beat Team Lithuania 3-0 overall, as Ugne Baskutyte lost to the young Shin in straight games. 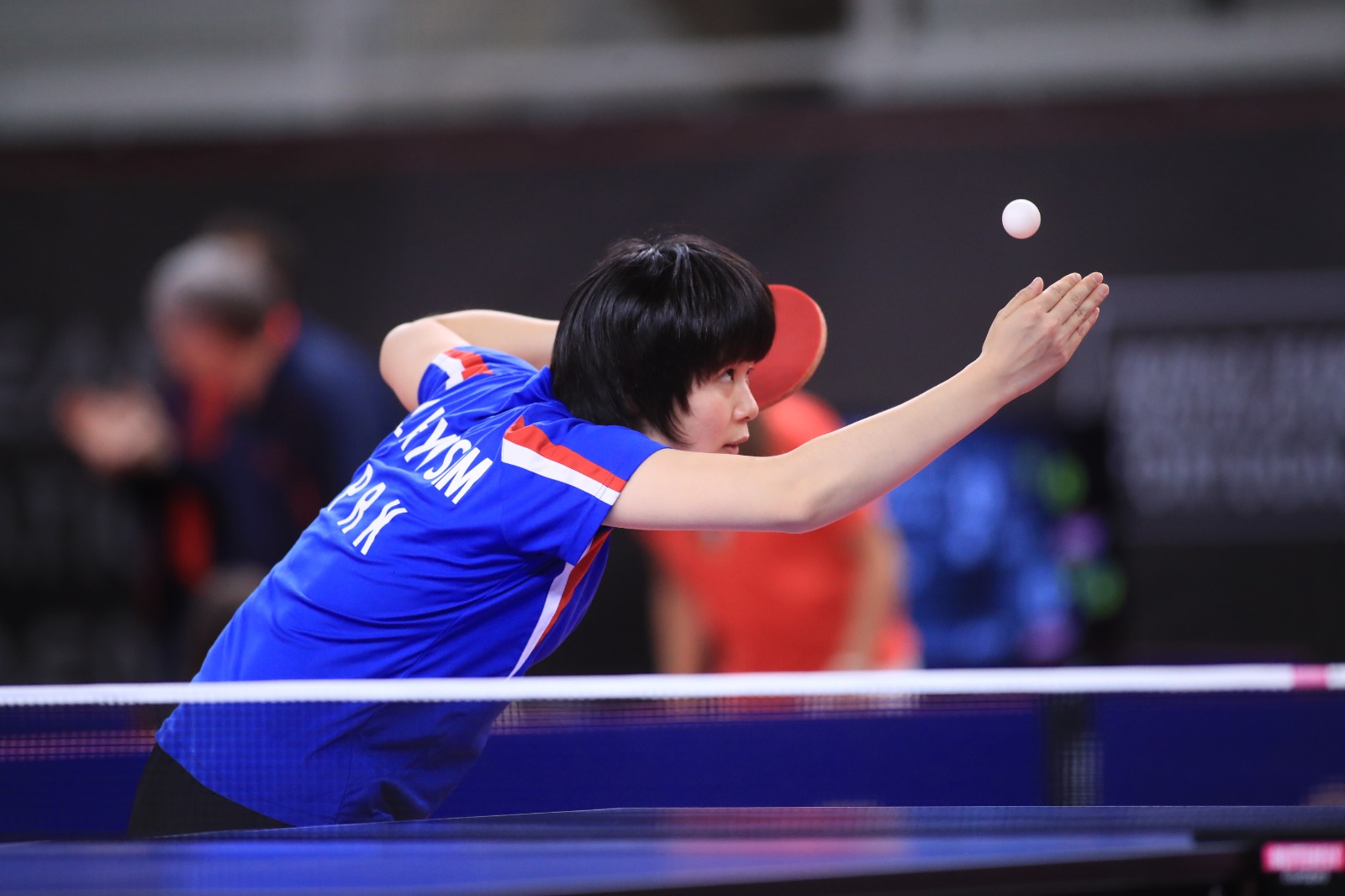 Viktoria Pavlovich has turned fortune in favor of the Belarussians as a mammoth comeback saw their team beat Thailand 3-2 overall, having been 1-2 down. After the heroics of Nadezhda Bogdanova, Pavlovich beat Nanthana Komwong 3-0 (15-13, 11-9, 11-7) to secure this massive victory.

Also, Korea Republic have now doubled their advantage, as Suh Hyowon beat Kornelija Riliskyte in straight games, meaning the Asian side lead by 2-0 against Lithuania. 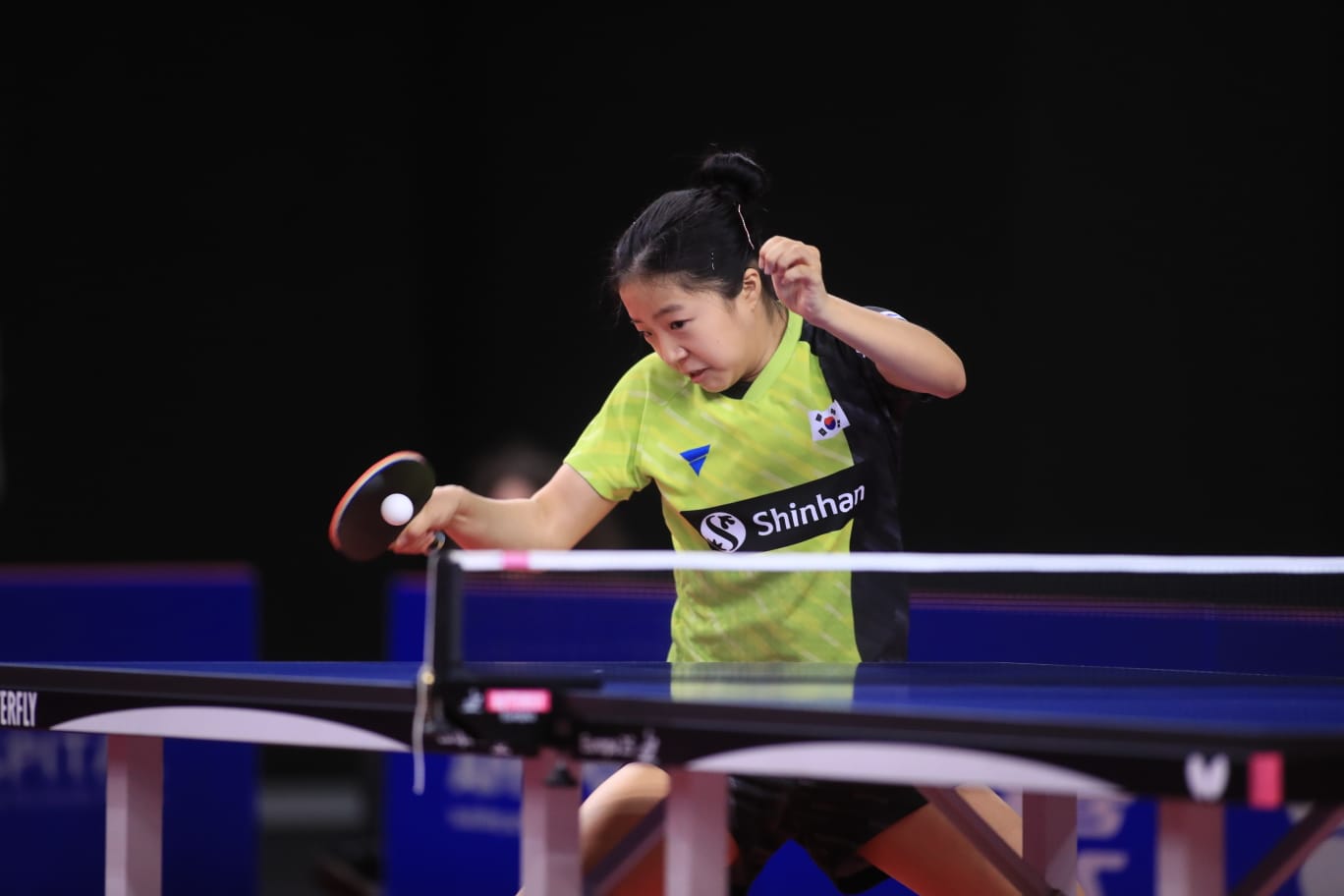 “It’s the first game, it’s strange, the pressure is here. We play against them a lot, against Mikhailova, we watched a video to prepare and we play our best. Against her (Mikhailova) it’s definitely difficult, because she attacks and defends a lot, it depends a lot more on her. We have to be focused and patient. We are playing Chinese Taipei, really good team, but we also have good doubles, we will try our best” Andrey Zarif 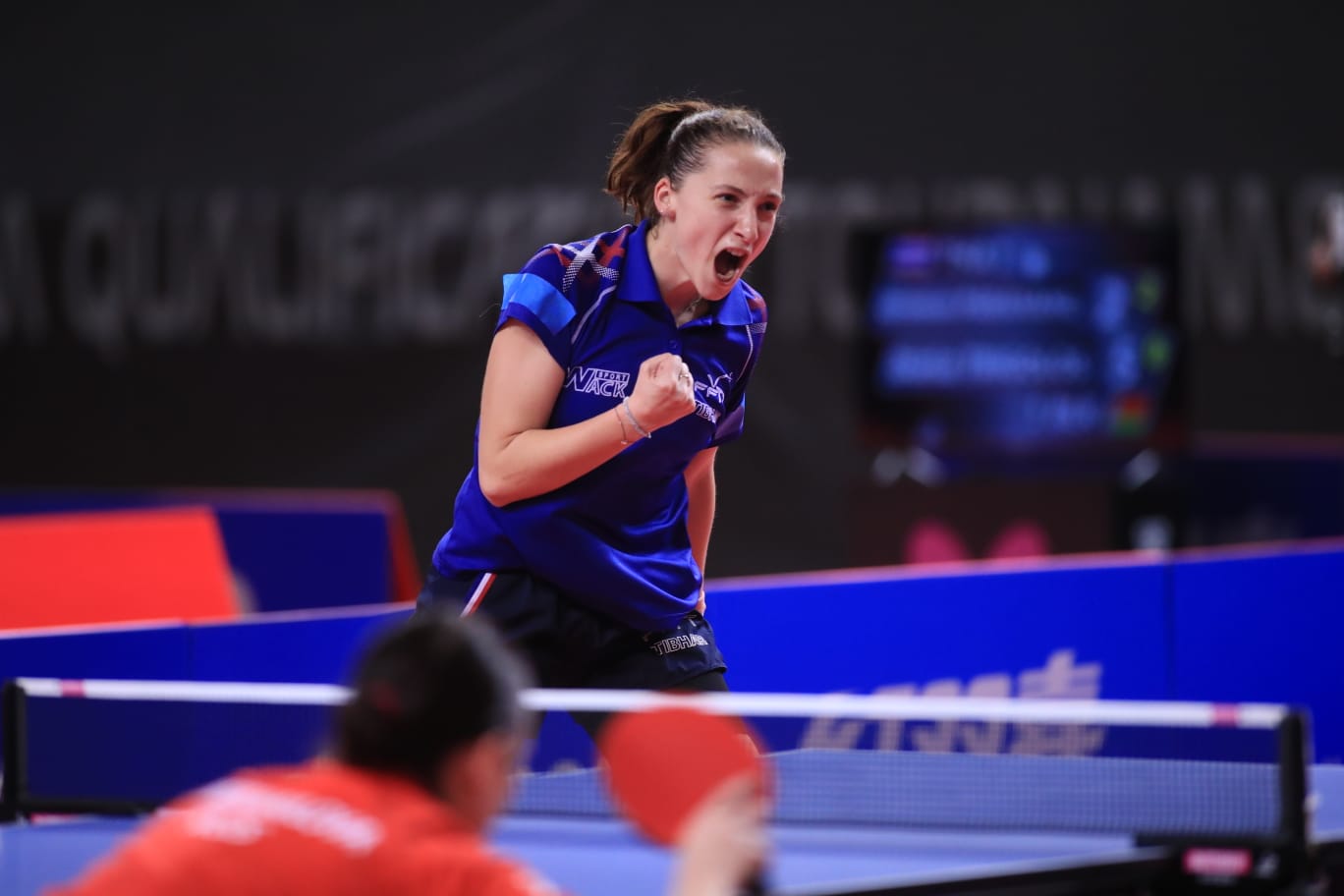 Thailand have hit back to take a 2-1 lead against Belarus, after Viktoria Pavlovich and Orawan Paranang won a game each. Team Singapore’s Feng Tianwei and Yu Mengyu have won back-to-back battles against Tessy Gonderineger and Sarah de Nutte, and are now leading Luxembourg 2-1.

Two for Netherlands, France one win away

Team Netherlands have a 2-0 lead over Serbia, as Li Jie won 3-1 (8-11, 11-6, 13-11, 11-5) versus Andrea Todorovic. Meanwhile, Team France rose back from a loss against Russia, and now have a 2-1 lead going into the singles’ match between Stephanie Loeuilette and Polina Mikhalilova. 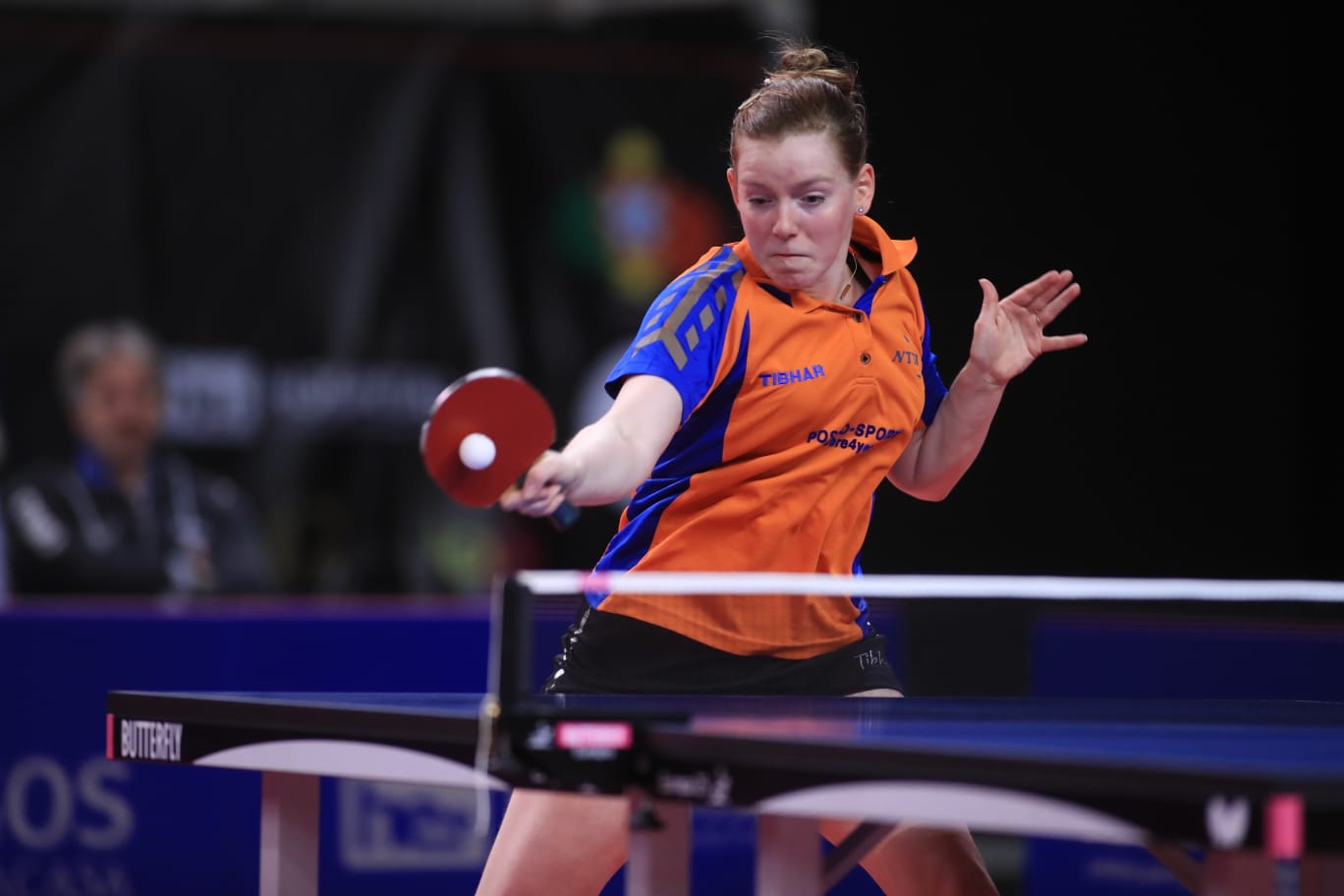 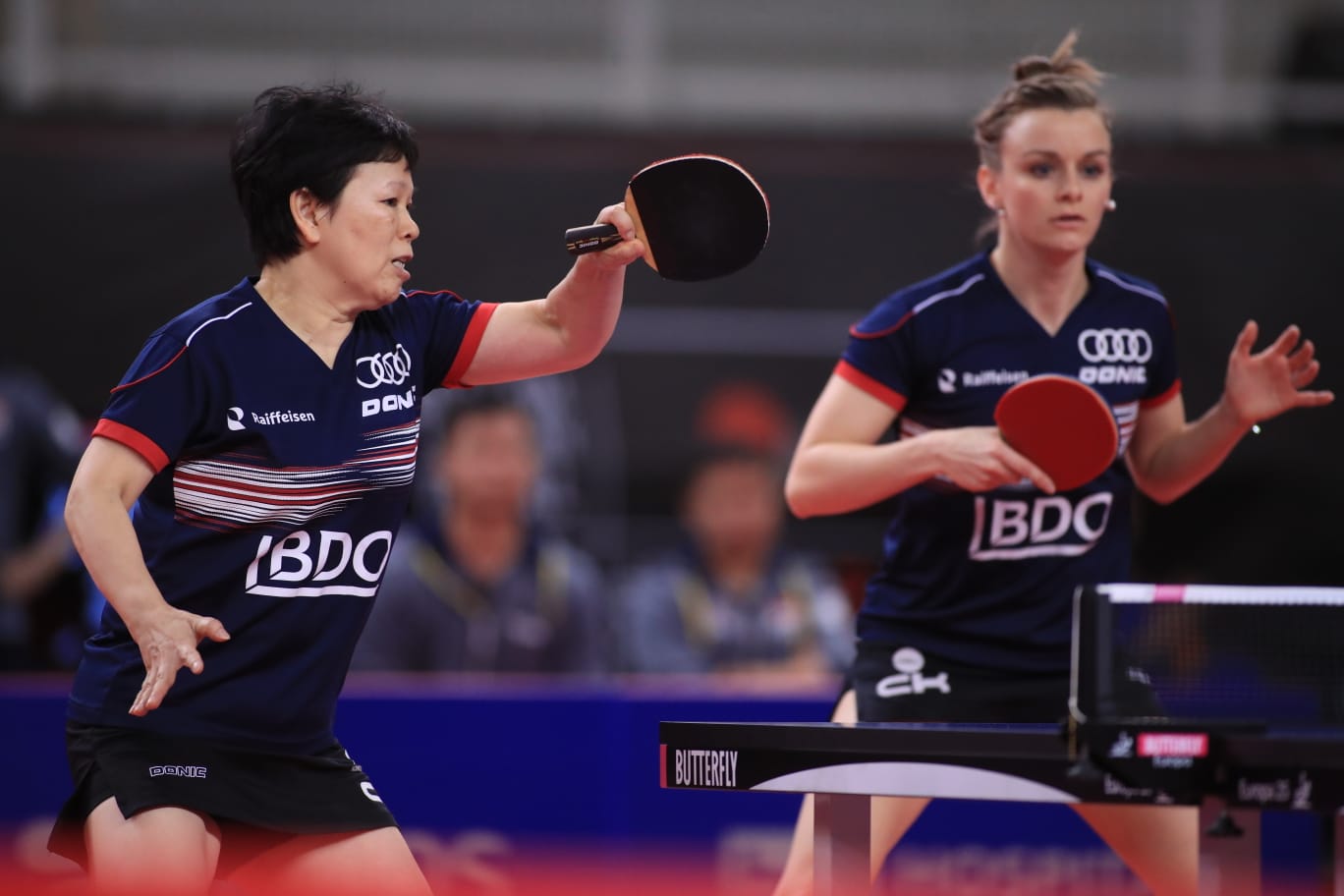 All hands on deck – the 12:00 session has just begun and we have four more women’s teams fixtures as Russia takes on France, with Thailand facing Belarus, Singapore against Luxembourg, and finally Serbia take on Netherlands. Get ready for some amazing games!

Italy comes good in the end

Off to a slow start in Gondomar but Italy has fought back from its early deficit to negotiate a brave Malaysian side 3-1. Mihai Bobocica picks up his second win of the match, needing just three games to prevail over Choong Javen (11-9, 11-2, 11-6). 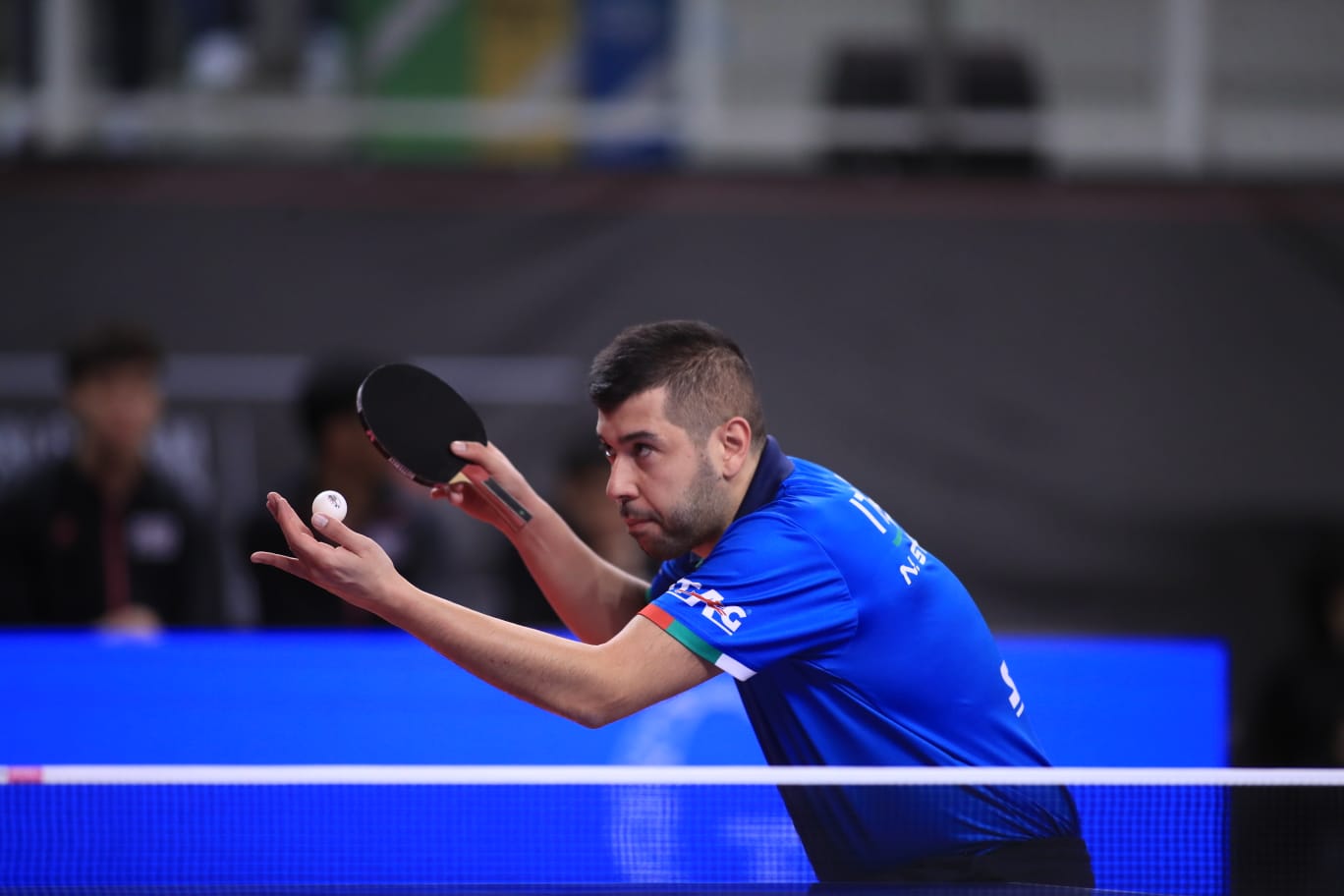 All smiles for Poland

We have some results to bring you, two of which make for positive reading for Polish fans. Team Poland completed 3-0 victories over Lithuania and Nigeria in the respective men’s and women’s team events while Ganna Gaponova helped Ukraine women to a 3-0 success over Belgium, beating Nathalie Marchetti without dropping a game.

“The score was 3-0 but it wasn’t an easy match. We were really focused, every one of us. In my game, 3rd set I was down 7-3, I tried to come back and succeed. Like before the European championship, we had a training camp in Porto. We practiced well and clever, I hope we will qualify for the Olympics. Team Nigeria is dangerous, they have very good players. So we need to think about the tactics and be prepared.” Jakub Dyjas

An established player on the European scene, Margaryta Pesotska has beaten a rising star in Belgium’s Lisa Lung (11-2, 11-9, 11-5) to extend Ukraine’s advantage over Belgium to 2-0. Poland also holds a 2-0 lead in its tie with Nigeria.

Over to the men’s team action and Italy has managed to level the scores against Malaysia. On table 2 Poland’s lead over Lithuania doubles to 2-0.

Seeded eight positions below their European counterparts but it’s Malaysia that claims a stunning early lead against Italy on table 1 with Choong Javen and Wong Qi Shen beating Leonardo Mutti and Niagol Stoyanov 3-1 (11-4, 3-11, 11-9, 12-10).

The other men’s team contest sees Poland 1-0 to the good against Lithuania while Poland and Ukraine lead Nigeria and Belgium respectively in the women’s team event.

The time has arrived – we have four fixtures to start off proceedings in Gondomar as Malaysia entertains Italy, with Lithuania and Poland also meeting in men’s team action while the women’s team event sees Poland and Nigeria face off and Belgium take on Ukraine.