Following the conclusion of group stage action at the Chengdu Airlines 2019 ITTF Men's World Cup the draw for the round of 16 took place from 18.00 local time on Friday 29th November. 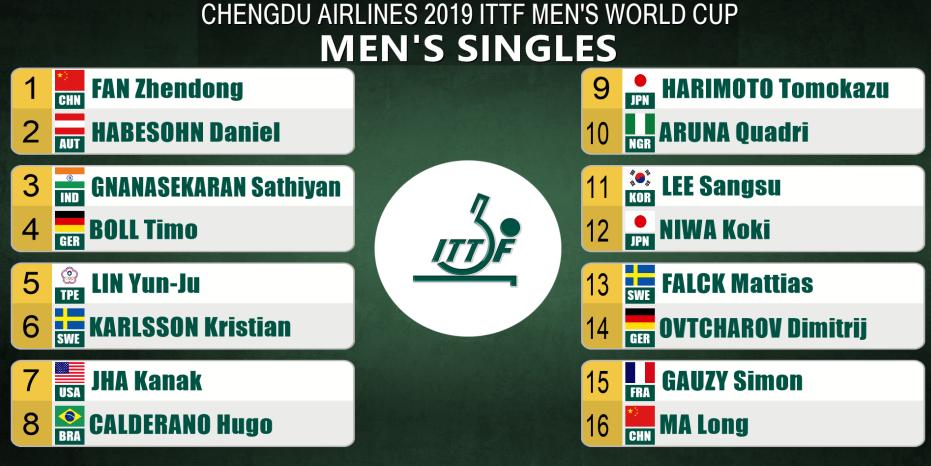 Winner last year at the 2018 Men’s World Cup in Paris, Chinese top seed Fan Zhendong has been handed an opening round tie against Austria’s Daniel Habesohn. Making his Men’s World Cup debut in Chengdu, Habesohn toppled Belarusian legend Vladimir Samsonov on his way to a runner up finish in Group A.

At the foot of the draw, the other Chinese player in action is the 2012 and 2015 Men’s World Cup champion, Ma Long. “The Dragon” opens his account in opposition to Frenchman Simon Gauzy, who finished fourth at the 2017 Men’s World Cup in Liège.

The standout player in group-stage action, Indian debut-maker Sathiyan Gnanasekaran defied the odds on day one to top group D, defeating both Simon Gauzy and Jonathan Groth. He has been rewarded with an exciting showdown with two-time Men’s World Cup champion Timo Boll in the round of 16.

Keen to return to the gold medal winning heights of his 2017 Men’s World Cup campaign, the other German player in Chengdu, Dimitrij Ovtcharov meets 2019 World Championships runner up Mattias Falck of Sweden, the wild card entry.

A match made in Pan America

The two biggest male stars in Pan America right now, Brazil’s Hugo Calderano and USA’s Kanak Jha will fight for a place in the quarter-finals. This will be their fourth meeting of 2019, after world no. 6 Calderano defeated Jha at the ITTF World Tour Platinum Austrian Open, the Pan American Games semi-finals and, of course, the ITTF Pan America Cup final, which secured both players’ tickets to Chengdu in the first place. Indeed, Jha has never beaten “The Thrill from Brazil” in six meetings. Can he turn the tide this time?

Africa’s sole representative in the round of 16, Nigerian star Quadri Aruna, 31, meets 2018 ITTF World Tour Grand Finals champion Tomokazu Harimoto, 16, in what is anticipated to be an exciting contest between two big-hitters.

Ten years his opening round opponent’s senior, Sweden’s Kristian Karlsson, 28, meets one of the breakthrough players of 2019 in Lin Yun-Ju, 18. The Chinese Taipei star has risen to no. 10 in the world rankings this year, but will meet his match in Karlsson, who won both group matches (against Aruna and Heming Hu) to book his place in the quarter-finals.