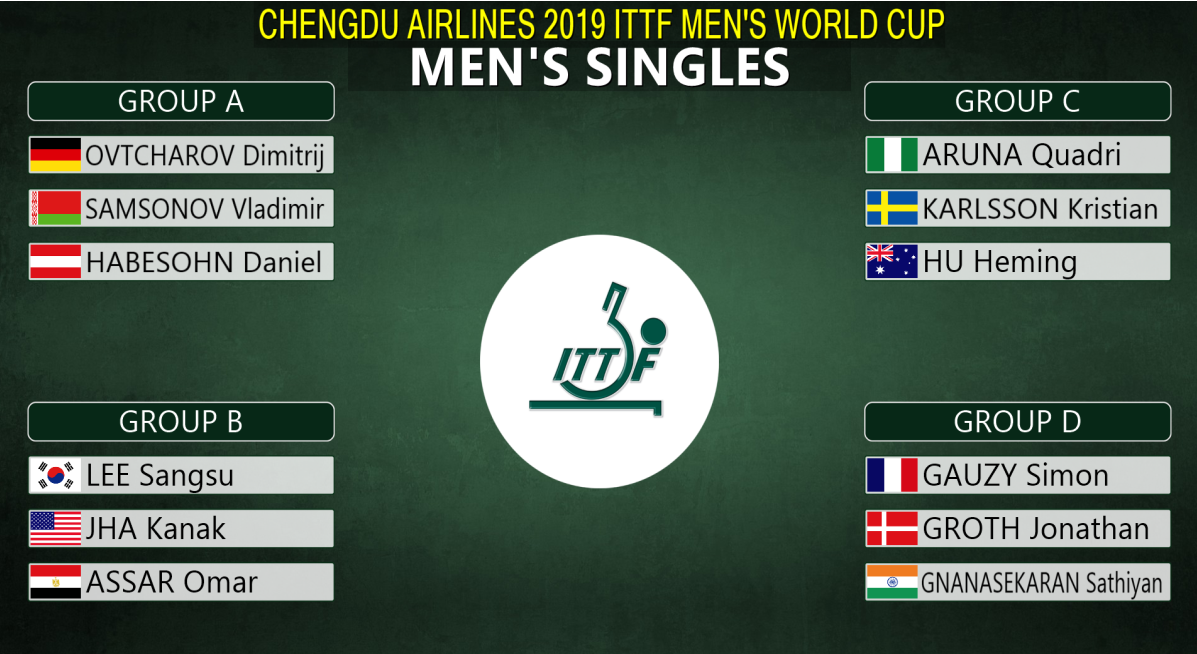 Group D: Battle in the G-Group!

The French, Indian and Danish athletes have never faced each other in the group stages in recent times, which makes this roster an unpredictable one. Gnanasekaran comes in on the back of having beaten Tomokazu Harimoto in straight games at the ITTF-ATTU Lion Asian Cup in the summer, while the Europeans Gauzy and Groth both have latter stage experience at this tournament to work in their favour. Question is, which ‘G’ misses out on the main draw?

The late invitee Aruna will look to better his quarter-final finish from five years ago in Düsseldorf, but has to first see off Karlsson and Hu – neither of whom are pushovers. It will comedown to a battle of wits between these three, no matter if Aruna has the term ‘favourite’ on his back.

Group B: Déjà vu for Jha and Sangsu

Kanak Jha is the young man that has everyone talking in the United States. The Youth Olympic Games bronze medallist is ready to impress at the Men’s World Cup. Jha has been placed in a group comprising of Korea Republic’s Lee Sangsu and Egyptian Omar Assar.

Lee and Jha were in the same group in the 2017 edition; this has all the makings of a personal “round two” between the two players. Funnily enough, it was Assar’s continental compatriot Quadri Aruna with Lee and Jha in 2017, which ended up with the Korea Republican topping the group and Jha eliminated after losing both his matches in seven game thrillers. Will the young American exact revenge this year?

Group A: Veterans galore in a European battlefest

Germany’s Dimitrij Ovtcharov and Belarussian Vladimir Samsonov are set to make their 12th and 17th appearances respectively at the Men’s World Cup; these two giants of the game will now hit it off against each other in group A. Joining them is 33 year old Austrian Daniel Habesohn.

The key battles here will be between the two former champions as Ovtcharov will want to assert his dominance against Samsonov. However, counting out Habesohn on his debut Men’s World Cup will not be a very wise move on anyone’s part.

The draw is live! Here’s what all of you have been waiting for:

Only eight out of the 12 athletes involved in group stage action will make the main draw and there are some tasty battles already lined up in the group stages!

We will be tracking some of those for you here right now – who do you think will come out on top?

The draw for the first stage for the Men’s World Cup is going to take place at 4.00 pm (local time) at the Sichuan Jinjiang Hotel in Chengdu – get your updates right here as we take a look at the best of the previous key battles in groups over the years!

First played in 1980 as an invitational event for 16 players, it was extended in 2009 to 19 players and then to 20 athletes in 2013, with the World champion automatically qualifying.

The remaining 18 players qualify through the Continental Cups, with the provision of no more than two players per association allowed to take part. A wild card entry is then selected by the ITTF to complete the roster of 20.