Titles secured, very much in the news in the past ten days, Japan’s Seu Goto and Romania’s Denis Movileanu, alongside the host nation’s Dorottya Tolgyes were very much the players to catch the eye on the opening day of play, Wednesday 6th November, at the 2019 Hungarian Junior and Cadet Open in Szombathely.

All booked main draw place but more significantly, in the process all beat the highest listed player in their respective groups.

Likewise, on the same day, Thursday 31st October, as Darius Movileanu succeeded in Poland, Seu Goto won the junior boys’ singles title in Nitra at the Slovak Junior and Cadet Open; in Szombathely he emulated Darius Movileanu. He remained unbeaten, accounting for Switzerland’s Mauro Scharrer (11-7, 11-8, 11-9), the highest rated player in the group; a win that meant a direct entry to the second round.

Meanwhile, Dorottya Tolgyes, who on Sunday 27th October had been a member of the European outfit that won the girls’ team event at the World Cadet Challenge, continued her winning ways. In the junior girls’ singles event, she remained unbeaten in the group stage of play, upsetting the odds by overcoming Julie Pennec of France (7-11, 11-6, 11-7, 11-9).

Similarly, China’s Sin Xiaomeng, Qin Yuxuan and Li Yake emerged in first positions contrary to ranking, as did Germany’s Leonie Berger, Poland’s Kamila Gryko and Chinese Taipei’s Chu Y-Ching alongside Joanna Sung of the United States. The main draw in the junior girls’ singles event, an event in which the top 16 seeded players received direct entry, has yet to commence.

Surprise first positions and hopes still alive; in the junior boys’ singles competition, contrary to expectations, Chinese Taipei’s Chang Yu-An and Poland’s Patryk Bielecki topped their groups and advanced directly to the second round of the draw.

The top 32 names in the junior boys’ singles event were not called to action on the opening day of play; all received direct entries to the second round.

However, in the junior boys’ doubles competition, the leading pairs were in present. Notably, there was one major upset as play advanced to the semi-final stage; moreover, it was disappointment for the host nation.

Csaba Andras in harness with Poland’s Szymon experienced a quarter-final defeat at the hands of China’s Yang Qulong and Zeng Beixun (4-11, 11-5, 11-7, 11-9). Yang Qulong and Zeng Beixun now meet Chinese Taipei’s Huang Yan-Cheng and Tai Ming-Wei, the top seeds; in the opposite half of the draw, also from China, Liang Guodong and Quan Kaiyuan, the no.2 seeds, confront Germany’s Kay Stumper and Felix Wetzel, the no.4 seeds.

One casualty of note in the junior boys’ doubles event, in the junior girls’ doubles it was twice the number. Germany’s Anastasia Bondareva and Sophia Klee, the no.2 seeds, experienced a third round defeat at the hands of China’s Leng Yuting and Li Yuqi (11-7, 7-11, 11-6, 12-10); the Chinese pairing duly accounting for Ukraine’s Anastasiya Dymytrenko and Alina Vydrachenko (11-4, 11-7, 11-6) to reserve their place in the penultimate round.

A third round defeat for Anastasia Bondareva and Sophia Klee, it was the same for Russia’s Elizabet Abraamian and Lubov Tentser, the no.3 seeds; they suffered when facing Chinese Taipei’s Chu Yi-Ching and Tsai Yun-En (11-6, 11-5, 11-7). Success for Chu Yi-Ching and Tsai Yun-En but the success was short lived; in the next round, the quarter-finals, they lost to China’s Li Yake and Wang Tianyi (11-4, 11-6, 11-6). 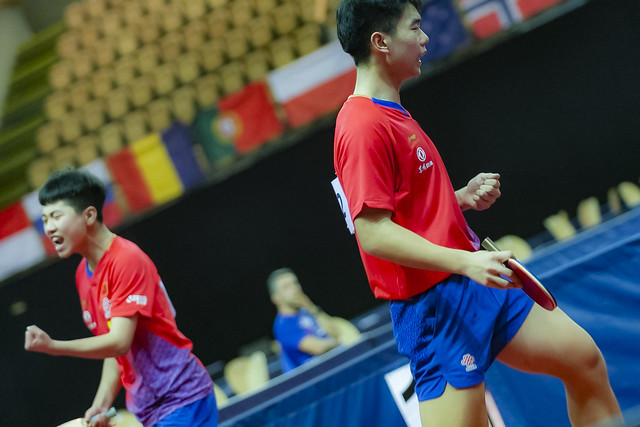