The road to Zhengzhou and the 2019 ITTF World Tour Grand Finals hots up in Europe with this week’s Swedish Open ahead of final World Tour events in Germany and Austria. 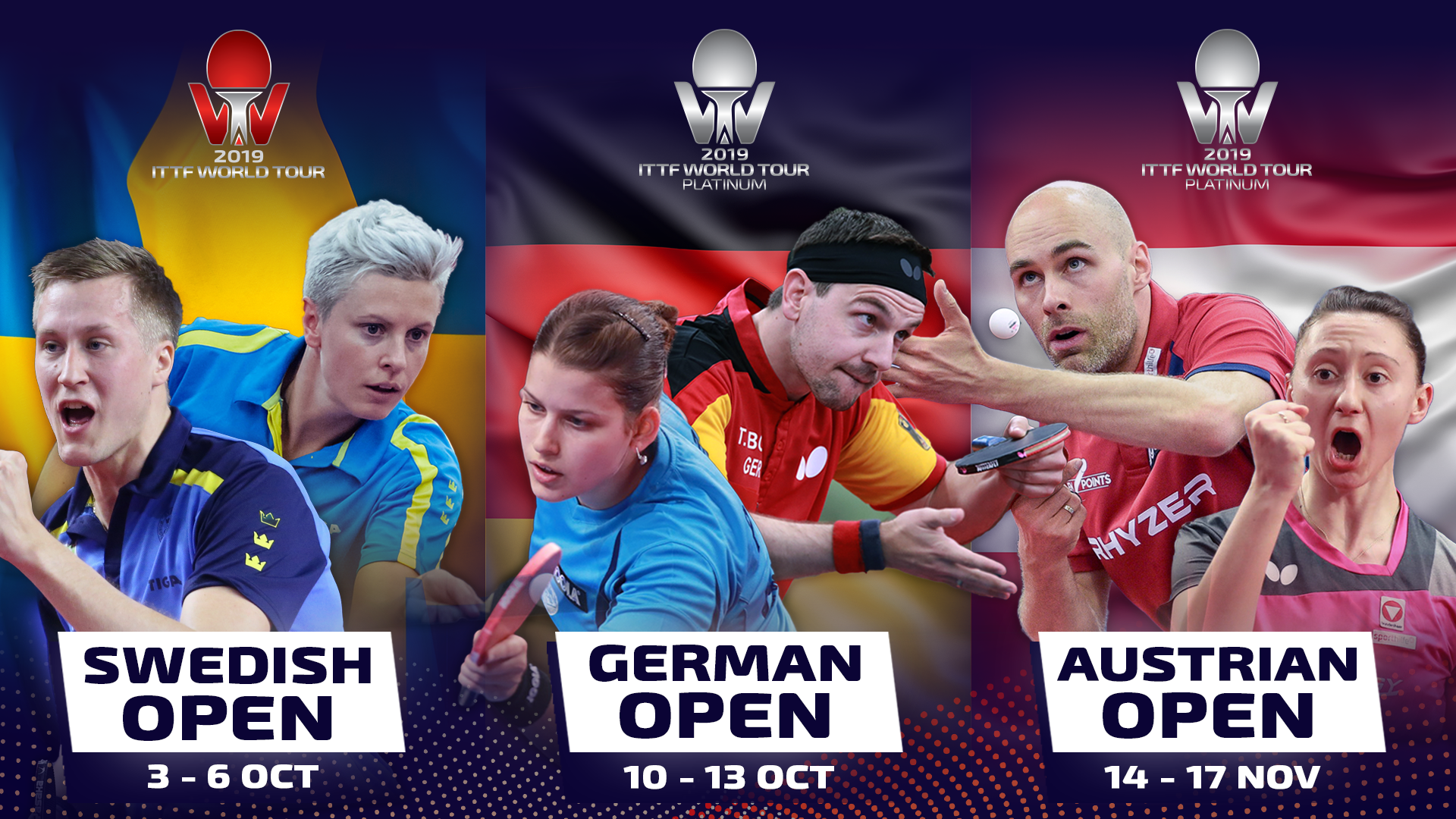 The race to reach the 2019 ITTF World Tour Grand Finals – the prestigious end-of-year showpiece event, which will be held in Zhengzhou, China between 12–15 December – is entering its dramatic final stages with three World Tour events left on the menu.

While several star players have already accumulated enough World Tour points to guarantee their tickets to Zhengzhou, more than half of the total line-up is yet to be confirmed. In order to qualify, players need to finish among the top 16 in the men’s and women’s competitions and among the top 8 in men’s, women’s and mixed doubles categories.

Yes, the ITTF World Tour Grand Finals are fast approaching, but the road to Zhengzhou is still long and with the potential for plenty more twists and turns along the way…

That’s why all eyes are on Europe at present, starting of course with this week’s ITTF World Tour Swedish Open in Stockholm, followed by two ITTF World Tour Platimum events in Bremen, Germany, and Linz, Austria.

The first stop on this European extravaganza is under way at the Eriksdalshallen in Stockholm. After two days of qualifying, some of the sport’s biggest names have gathered in the Swedish capital for the main draw between 3-6 October.

Men’s world no.1 Xu Xin (CHN) already has three World Tour titles to his name this year and is seeking a fourth to avenge last year’s final defeat to Fan Zhendong (CHN) in Stockholm. The top two seeds could face one another in this year’s showpiece too.

With the backing of the home crowd, Persson faces Fan Zhendong in the first round, while Falck and Karlsson could potentially meet in the quarter-finals. Their section of the draw however includes teenage talents Tomokazu Harimoto (JPN) and Wang Chuqin (CHN) as well as JANG Woojin (KOR), SUN Wen (CHN) and Zhao Zihao (CHN) who are all battling hard for coveted points in order to reach the World Tour Grand Finals.

German pair Dimitrij Ovtcharov and Patrick Franziska are close to confirming their places in Zhengzhou and could cross paths in the final eight in Stockholm, although the likes of 3rd seed Lin Gaoyuan (CHN) and Wong Chun Ting (HKG), who is currently one spot below the cut for Zhengzhou qualification, will have different ideas.

China has sent an all-star line-up to Stockholm, such that already in the quarter-finals it’s conceivable that world no.1 Chen Meng could cross paths with reigning world champion Liu Shiwen for the first time since their epic final showdown at the 2019 World Championships in Budapest.

Another eye-catching quarter-final could well materialise in the form of Ding Ning vs Sun Yingsha, who have already claimed one victory apiece against each other on this year’s World Tour, with reigning Olympic champion Ding winning their Korea Open semi-final before Sun scored revenge at the Australian Open final. The 18-year-old star tops the World Tour women’s singles chart with two triumphs on the Tour so far before claiming gold with another breath-taking display at last month’s Asian Championships.

Fellow Chinese stars, Zhu Yuling and Wang Manyu, are set to come up against Japan’s finest with Kasumi Ishikawa in the same section of the draw as Zhu, while Wang could conceivably face Mima Ito or Miu Hirano, who must overcome compatriots Hitomi Sato and Hina Hayata in their respective round one matches.

“The success that we’ve been having now started last year with the World Team Championships at home in Halmstad where we took the bronze medal; then of course Mattias (Falck) reaching the final at this year’s World Championships (in Budapest). So of course, this has been great for the entire table tennis community in Sweden and the team as a whole. We have shown that a lot of things are possible and I hope this will now give a positive forward momentum to every member of the team.” – Swedish assistant coach, Jorgen Persson

PLENTY AT STAKE IN STOCKHOLM!

Stay tuned on all the action as it unfolds by following these links: