Progress to the main draw in the junior boys’ team event for the top seeds, Poland’s Samuel Kulczycki, Macej Kubik and Szymon Kolasa as anticipated; it was the same for the Chinese combination of Wu Yangchen, Yuan Yuan and Zang Xiaotong in the junior girls’ team competition.

However, when play closed on Friday 20th September at the 2019 Croatia Junior and Cadet Open in Varazdin, in events where only first position in the initial stage group meant a quarter-final reservation, there were plenty of surprise first places.

The no.21 listed outfit, the combination formed by Germany’s Daniel Rinderer in partnership with Korea Republic’s Kim Hyunso and Park Minjun finished in first place in their junior boys’ team group contrary to expectations, as did the no.12 seeded Italian outfit comprising Marco Cappuccio, Tommaso Giovannetti, John Oyebode and Andrea Puppo.

Likewise but perhaps no great surprise, the Chinese trio of Niu Guankai, Xiong Mengyang and Yang Qulong, named at no.22 in the order of merit, secured first place in their group; a situation that also applied to the Chinese Taipei formation of Huang Yu-Jen, Feng Yi-Hsin and Yang Zhi-Xing, the no.10 seeds.

Unexpected first positions it was the same in the first stage of the junior girls’ team competition.

Named at no.15 in the pecking order, the combination formed by Japan’s Misa Inayoshi and Haruna Sugita alongside Tiffany Ke of the United States reserved first place in their group, as did Korea Republic’s An Soyeon and Kim Jimin, who joined forces with Luxembourg’s Ni Xaojing. They commenced play as the 25th rated outfit.

It was no different in the cadet boys’ team and cadet girls’ team events; the top seeds, duly enjoyed success but lower down the order there were unexpected first places.

In the cadet boys’ team event, China’s Chen Yuanyu, Lin Shidong and Zhang Minghao finished in first place in their group as their exalted status advised; however, in four of the eight groups there surprise pole positions.

The no.15 seeds, Sweden’s Davd Bjorkryd and Charlie Carlsson emerged in first position in their group, as did the no.9 seeds, the Czech Republic partnership comprising Stepan Brhel and Vit Kadlec. Not to be overshadowed it was the same outcome for the no.10 seeds, the Chinese Taipei combination of Chang Yu-An and Chen Yen-Ting, as it was for the no.11 seeds, the Spanish outfit formed by Daniel Berzosa, Marc Miro and Hugo Urquizar.

Meanwhile, in the cadet girls’ team competition, in the same vein as their male counterparts, the top seeds, the Chinese outfit formed by Kuai Man, Chen Yi and Leng Yutong duly ended the day unbeaten and in first place.

Impressive performances, notably Kuai Man and Chen Yi currently hold the respective top two places on the under 15 girls’ world rankings; their efforts caught the eye but the teams to attract the attention were those from Russia.

In a competition where there were seven groups in the initial phase, as opposed to eight in the other events, Russia selecting from Anastasiia Berezneva, Anastasia Sizova, Daniela Danilova and Evgeniya Tikhanova, the no.8 seeds, reserved first place in their group. Noteworthy, it was a feat that was also achieved by their Russian colleagues, the no.11 seeds, the combination of Mariia Baranova, Anastasiia Ivanova, Iuliia Pugovkna and Maria Tarasova.

Play in the team events concludes on Saturday 21st September. 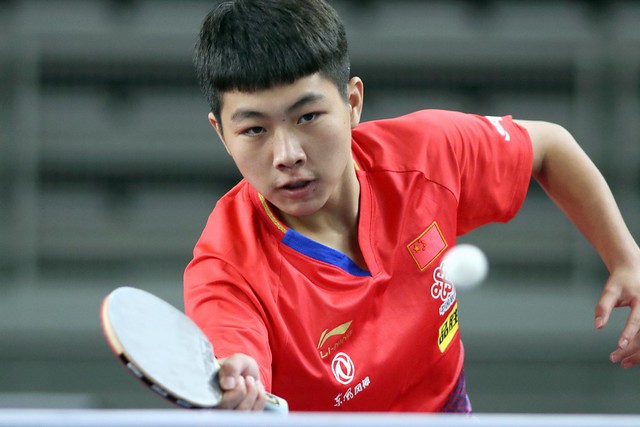