Smash Street by TTX: A huge success in Denver!

A first-of-its-kind ping pong experience hit the streets of Denver, Colorado, as ITTF and Two Parts teamed up to present 'Smash Street by TTX.'

The most innovative, entertaining and inclusive form of the sport: more than 4,200 people spent Saturday 24th August basking in the sunshine at one incredible ping pong party in Denver, Colorado, for the first ever Table Tennis X (TTX) event, ‘Smash Street by TTX.’

Birth of an idea

TTX is an action-packed rendition of table tennis, which puts a fun new spin on the sport. The idea was born in 2015 when the ITTF faced the challenge of engaging more with people who play table tennis as a socially competitive activity, rather than the professional athletes.

With an estimated 330 million people playing, table tennis remains one of the only sports in the world that literally everyone has experienced in one form or another. This thought process led to the ITTF’s research and development team  to the conclusion that most players just love playing in a social, entertaining, and competitive environment.

By removing the technical barriers of the elite sport and adding an exciting, accelerated time-bound format played with redesigned equipment, TTX  levels the playing field allowing access to anyone that loves to just pick up a paddle and play. It brings out the socially competitive drive in people and frankly, is just so much fun! TTX is something that appeals to anyone and everyone. It is more than a sport. It’s a lifestyle.

Is there a better place to launch a public-driven format of a sport than the Olympic Games? We did not think so, either. Launched at a promotional event at Rio 2016, the first major trial was a success.  This brought better insight into how the players wanted TTX to evolve and what steps we could take to make it more player-friendly while keeping things fresh, exciting, and interactive.

Over the last three years, the ITTF ran test events across the globe in order to promote the brand and refine the concept. It has been hugely important to keep an open mind, and much like TTX, not bound to any one defined state of this enigmatic chapter of table tennis for the people.

The story in Denver

On Saturday 24th August 2019, our dream of having a true ‘sport for all’ was realized when Denver hosted the first official TTX festival last weekend.

At ‘Smash Street by TTX’ anyone who joined the festivities did not have to be holding a paddle to have a great time. Players and guests alike were able to enjoy live music and interactive TTX activations where they tested their luck on different variations of TTX tables. A variety of food trucks served up delicious treats while custom-built bars poured refreshing cocktails and craft beers all day.

A huge and fun-loving crowd of 4,200 people joined in the party to experience the following unique opportunities:

For the ITTF, this was a huge sign that TTX has finally arrived and with amazing success. Everyone present was able to have fun, chill with their friends, all whilst playing ping pong.

“After years of work refining the concept, it was a dream come true to see TTX come to life in Denver and see over 4000 people enjoying the thrill of table tennis in a social environment. TTX is here to stay.” – Matt Pound, ITTF Marketing Director

Some more than satisfied customers had this to say after the unforgettable event:

“I have been involved in table tennis for most of my life, and I have never seen an event that I felt had so much potential to change the landscape of our sport. Thank you for letting us be a part of it.”

“As a sponsor, this is one of the coolest and most fun activations we have ever been a part of. We play in the office all the time, but this format – and especially the equipment – made it more fun and accessible. We felt like superstars. What other sport can you play competitively with an Olympian and hang out with them after?”

“I have often played ping pong in my friend’s garage, but I never thought it could be so cool. TTX is so fun. I love the concept. I hope you guys come back next year!”

“What could be more fun than beers, sun and table tennis. Loved it!” 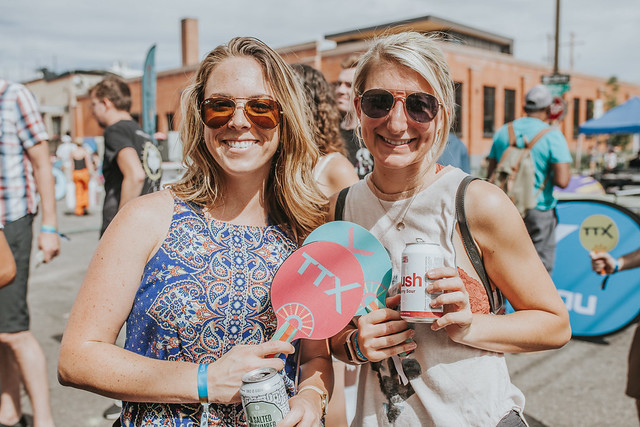 Keeping up the pace…in Rome!

Whether you come to compete, or just to play some casual pong with your friends, Smash Street is an ace when it comes to fun! And that’s the reason we are continuing the revolution by bringing the next TTX event to Rome!

The “Roma Ping Pong Fest, a TTX Experience” will be held on Sunday 6th October 2019, continuing the 360° all-rounded TTX Experience for participants, featuring a “TTX tournament”, a “Celebrity tournament”, fun zones, music, shows and even more…

Be sure to join in the party with us at the “Roma Ping Pong Fest”! Experience it. Live it. Love it.