Catch up on all of the updates from Day Seven at the Liebherr 2019 ITTF World Table Tennis Championships in the Hungarian capital of Budapest. 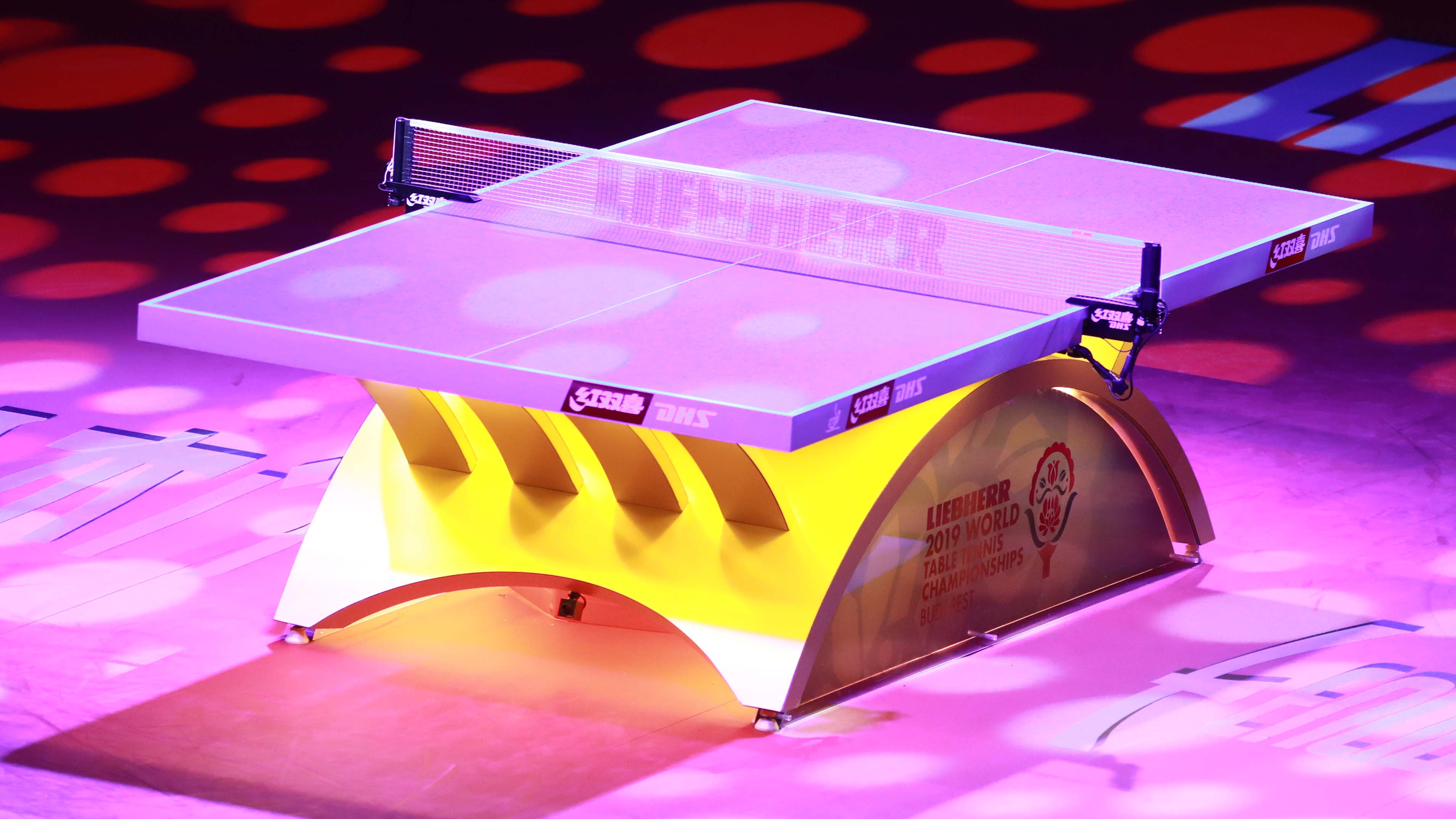 Leading at the switch of ends Sun Yingsha and Wang Manyu didn’t look back, storming to an 11-5 win in game seven to book their place in the gold medal contest where Japan’s Hina Hayata and Mima Ito await.

Chen and Zhu refuse to give up belief, taking game six 11-9 to force a seventh and deciding game – who will claim victory?

Drama in game four as Chen and Zhu receive a yellow card at 4-4 for taking a little too long to get their service underway but that didn’t hold them back as they won seven of the next nine points to seal a 11-6 victory. However, the lead still lies with Sun and Wang following their 11-6 win in game five.

We have a contest on our hands here as Chen Meng and Zhu Yuling find their way back into the match, claiming the third game 11-9 to half the games deficit to one.

A convincing 11-3 win in game one, Sun Yingsha and Wang Manyu have doubled their advantage but in game two the margins were much smaller as a time-out call at 8-7 helped the young duo edge it 11-9.

The final fixture of the day sees China’s Chen Meng and Zhu Yuling meet Sun Yingsha and Wang Manyu – who will oppose Hina Hayata and Mima Ito in the final?

On the backfoot at 8-5 down Honoka Hashimoto and Hitomi Sato use their time-out but it’s not enough to disrupt their opponents as Hina Hayata and Mima Ito prevail 11-7 to move through.

From 1-2 games down, Hayata and Ito now find themselves 3-2 up after picking up back-to-back games by 11-5 score-lines. Hayata and Ito are now just one game win away from the final.

Levelling the scores with a 12-10 margin in game two, Hashimoto and Sato were also taken to deuce in game three with the defensive-minded combination edging to a 16-14 win to move ahead in the tie.

Down 0-5 but it is Hina Hayata and Mima Ito who take an early lead in the first semi-final, claiming the opening game 11-9.

Rounding off the day’s programme we have two women’s doubles semi-finals:

Fresh from his outstanding victory Mattias Falck looks back on his semi-final success:

“I have no idea how happy I am and I don’t have any words to describe my feeling. I just try to focus on every ball and one ball at a time. I kept working hard in the match. Getting to the final is just unbelievable for me and my country and I am so happy to perform well in this competition. My coach has been in this situation before and he just told me to keep calm and focus on the next ball. I think my marriage has helped my performance in the last year and my wife has been very supportive even back home.” Mattias Falck

He’s done it! Mattias Falck becomes the first Swedish player to reach the men’s singles final since 1997 after securing a deciding game victory over An Jaehyun.

The early advantage in game seven appeared to be with An, who moved two points clear at 2-4 but Falck refused to give up the fight winning nine of the following ten points to seal the historic win.

Down to the wire: An Jaehyun 3-3 Mattias Falck

That’s right this match is going to need a deciding seventh game. An will be feeling the more confident of the two players having taken game six by a commanding 11-2 margin.

For all the twists and turns we’ve seen so far in this match, now we finally see back-to-back game wins as Falck starts to find his rhythm. In game five the Swede fought back from 6-9 down to win 11-9.

It’s hard to gauge which way this match is going: a convincing display from Falck in game two but the third game is exactly the opposite as An storms to an 11-3 victory.

All square: An Jaehyun 1-1 Mattias Falck

A close contest but the first game goes to An Jaehyun 11-8. How will Mattias Falck respond in game two?

An Jaehyun vs Mattias Falck underway!

Korean qualifier An Jaehyun and 16th seed Mattias Falck are now fighting it out for the other spot in the men’s singles final.

“From the beginning of the match I was leading but Liang Jingkun came back. But I made sure I utilised most of the important balls and I stuck to my game. I was also active throughout the match and I think I played very well. No matter the opponent in the final, I think it is an opportunity and challenge to me but I prefer the challenge.” Ma Long

At 5-2 down Liang Jingkun calls a time-out in an attempt to break up his opponent’s momentum and it appears to work, moving 9-10 in front. Ma Long retakes the lead at 11-10 only for Liang Jingkun to level the scores at 11-11 after clipping the back-edge of the table. Saving a game point at 11-12, Ma goes on to hold a match point ball at 13-12 and this time he takes full advantage to reach the final.

What an intense match!!!

Towards the latter end of game four Ma Long slips and can be seen rotating his ankle but ultimately he stays on course, winning 11-9. Momentum is well and truly on his side now.

Both players are really giving it a go here: at 6-4 in his direction Ma Long caps off a breathtaking rally with a spectacular cross-court finish and we see another stunner at 8-5 this time ending in Liang Jingkun’s favour. Ma Long calls a time-out with the scores at 8-7 and eventually gets the job done 11-9.

Are you watching Liang Jingkun vs Ma Long live? If not head over to itTV now!!!

Liang Jingkun puts his opening game disappointments behind him, moving four game points ahead but only needs the one to win 11-6.

Trailing 1-5 at one stage but that’s not enough to stop Ma Long from taking the opening game 11-8 – the Dragon makes the perfect start.

Here we go, Liang Jingkun and Ma Long take to the table and the action is underway.

Here’s the line-up for the penultimate round of men’s singles action:

“I think from the way Chen Meng played in the final, there has been a lot of improvement in her game both tactically and mentally. There was no huge advantage for me against her in the final, but the key to my victory was that I played more relaxed… Even there was a moment in the match, I was just thinking too much about the title but I had to relax myself to play under a good atmosphere. I think last year there was a new adjustment in the team to move to the next level and my coach was not with me then. So I lost faith in myself but the China Table Tennis Association has encouraged and supported me and this lifted me. I must really thank them for their support. I think winning by 11-0 was what we discussed before the competition as a team and we were made to realise that there was no rule that says you must give your opponent a point if you are leading with such margin. I think such game helps to bring the best out of me with respect for my opponent and for the game.” Liu Shiwen

A slow start the previous day against Ding Ning, it was somewhat similar for Liu Shiwen in opposition to Chen Meng who approached proceedings in a very deliberate manner, her services taking an eternity. Eventually, in the opening game she gained success by the minimal margin.

Resolute, Liu Shiwen responded to secure the second and third games; at all times trying to increase the tempo of the play. In the fourth game Chen Meng went ahead 7-3, Liu Shiwen won the next three points, Chen Meng called “Time Out”; the break proved effective. She surrendered just one further point, parity.

Electing to serve from the centre of the table, thus being able to cover any angles Chen Meng may achieve, Liu Shiwen did a Ding Ning of the previous day; she won the fifth game without surrendering a single point.

Now confident, in the sixth game, Liu Shiwen established an 8-3 lead. The next two points went to Chen Meng, Liu Shiwen called “Time Out”. She secured the next point before after scintillating exchanges holding two match points at 10-8; she converted at the first attempt.

Halted at the final hurdle but Spain’s Alvaro Robles has nothing but positive memories from Budapest:

“This is an amazing tournament for me and this is the first medal for Spain in a World Championships and it was indeed a good feeling playing in the final. It was an incredible moment for me and I think we played against a strong opponent in the final. I hope to celebrate this silver medal with my family because this is a dream comes true and you never know whether you will have this kind of opportunity again in life.” Alvaro Robles

Here’s what the newly crowned men’s doubles champions have to say:

“I think our opponents were a very good pair because they defeated us in our last meeting at the China Open and we prepared very well for them in the final. We started the game very well and this really helped us to finish well. I am very happy with the victory but I must acknowledge that we tend to understand each other as the competition progressed.” Ma Long

“I gained a lot from playing doubles with Ma Long but I learnt from his attitude especially playing doubles and singles events in a tournament. I had to focus on the doubles while he concentrated in the singles but I enjoyed playing with him because he encouraged me even when I made mistakes in order to take my mind away from the mistakes. He also offers advice while playing and I am so excited with this title in my first World Championships. I hope to celebrate it in my own way when I am alone.” Wang Chuqin

Focused Ma Long and Wang Chuqin made the best possible start, the early timing for which the Chinese are renowned being paramount.

Crowd support, Ovidiu Ionescu and Alvaro Robles responded; level at 8-all in the second game, the secured the next three points to level matters. Advice from Chen Qi, in the third game Ma Long and Wang Chuqin made the better start. They established a 4-1 lead; Ovidiu Ionescu and Alvaro Robles reduced the arrears to one point at 7-6, Chen Qi called his troops to order, “Time Out”. It proved a wise move, the duo won the next four points and at the second attempt secured the game.

A brave effort from Ovidiu Ionescu and Alvaro Robles but matters were moving in one direction, in the fifth game Ma Long and Wang Chuqin established a stranglehold. They moved ahead 8-2, at 10-4 they held six match points, at the third attempt they converted.

The penultimate day has arrived! Sit back and enjoy the show – for detailed information take a look at the fixture schedule below:

Grab a look at the fixture line-up for Day Seven with our quick preview article:

Preview Day Seven: High stakes as penultimate day arrives, who will rise to the occasion?