Incredibly, four of the world’s top six Men’s Singles players bowed out of the World Table Tennis Championships on a drama-filled Day 5 in Budapest, Hungary. 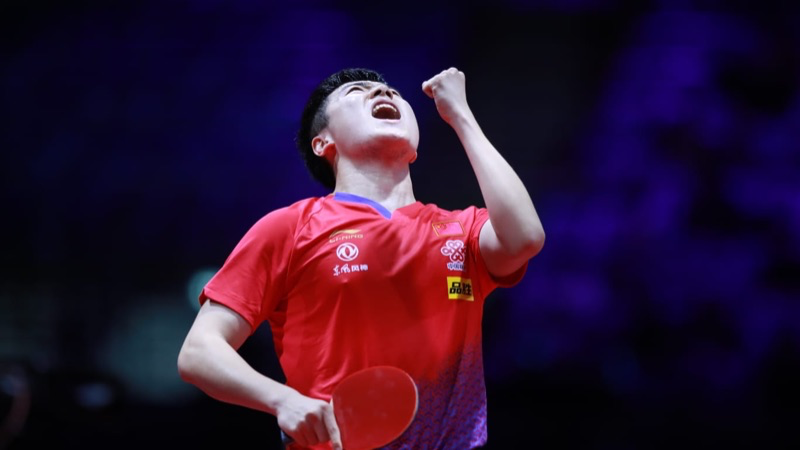 An elimination in the round of 16 seemed inconceivable, especially when FAN started strong to claim the first game, only to lose the next three as LIANG powered his way back into the contest and eventually booked a quarter-final place against Koki NIWA (JPN).

The exit of world no. 2 XU Xin on the previous day left world no. 4 Tomokazu HARIMOTO (JPN) as the highest ranked player left on his side of the draw. Presented with a golden opportunity – in the eyes of many – to reach the final of the event in Budapest, he too came undone in his match against AN Jaehyun (KOR) positioned 157th.

Once more, the 19-year-old defied his ranking and sealed his seventh win of the week since emerging from the qualification rounds. Against HARIMOTO, he won 4-2 (11-7, 3-11, 11-8, 11-7, 8-11, 11-9), a result which left his 15-year-old opponent tearful at the end, perhaps realising the opportunity missed to go much further in the competition.

On the other side of the draw, Chinese duo LIN Gaoyuan (world no. 3) and MA Long (no. 11) romped to 4-0 and 4-1 victories over JEOUNG Youngsik (KOR) and Hugo CALDERANO (BRA) respectively, taking their chances to secure spots in the final eight.

A EUROPEAN IN THE SEMI-FINAL, BUT NOT TIMO BOLL

Sad news broke in the morning that 38-year-old table tennis legend Timo BOLL (GER) was forced to withdraw from the Men’s Singles competition (and later too the Men’s Doubles) due to a fever, thus leaving JANG Woojin (KOR) a clear path to the quarter-final.

Despite that, Day 5 was largely a positive day for European players. World no. 6 LEE Sangsu (KOR) succumbed to the mighty Mattias FALCK (SWE), the no. 16 continuing his stunning run of form on the international stage. A semi-finalist at the ITTF World Tour Qatar Open and runner-up at the ITTF Challenge Plus Oman Open, both played last month, FALCK is now in the quarter-final of the world’s biggest event of the year, where he will face Simon GAUZY (FRA).

The hero of Day 4, by virtue of his epic victory over XU Xin, GAUZY defeated WANG Yang (SVK) in straight games. Now the Frenchman will battle it out with FALCK in a bid to become the first European player to reach the semi-finals of a World Championships since Timo BOLL in 2011.

HISTORY TOO FOR SPAIN AND PORTUGAL

Two new countries will be added to the list of World Championships medal winners with Spain and Portugal guaranteeing their place on the Men’s Doubles podium.

Alvaro ROBLES (ESP) and Ovidiu IONESCU (ROU) ran out 4-0 winners in their encounter against Mattias FALCK and Kristian Karlsson (SWE) (11-5, 11-7, 13-11, 11-9), while Tiago Apolonia and Joao Monteiro (POR) progressed by default following the withdrawal of Timo BOLL and Patrick FRANZISKA (GER).

The fact that the aforementioned European winners will face one another in the next round means that another record will be written, as one of Spain or Portugal will reach a final for the very first time!

Following yesterday’s exits of Mima ITO and Kasumi ISHIKAWA (JPN), today’s results complete a disappointing couple of days for the Japanese camp, who had hoped to challenge China’s best female players for major medals, but now the latter nation is guaranteed to lockout the podium in the Women’s Singles competition once more.

If China reigns supreme in the Women’s Singles, Japan do remain in the hunt for top prizes in the Mixed and Women’s Doubles finals.

Meanwhile, in the Women’s Doubles, there is also the guarantee of a Japan vs China final: Saturday’s semi-finals will see Japan’s Hina HAYATA and Mima ITO take on compatriots Honoka HASHIMOTO and Hitomi SATO, while CHEN Meng and ZHU Yuling face SUN Yingsha and WANG Manyu in a bid to challenge for Gold.

THE SCENT OF SILVERWARE!

If Day 5 will live long in the memory, more incredible matches are in store for Day 6, as players start to target the major prizes on offer this weekend in Budapest.